Accessibility links
For Venezuela's 'Millionaire' Contestants, Winnings Amount To A Few Bucks : Parallels Venezuela produces its own version of the hit game show franchise Who Wants to Be a Millionaire? In a country with runaway inflation, the top prize of 1 million bolivars is worth about $2,000.

You know the TV game show Who Wants to be a Millionaire? Typically, winners get big money — like $1 million — but it's a little different in the version played in Venezuela.

Nervous contestants gather at a Caracas TV studio to tape an episode of Quien Quiere Ser Millonario? Some borrow fancy clothes from the studio wardrobe. Others get last-minute touch-ups to their hair and makeup.

Then the show begins. 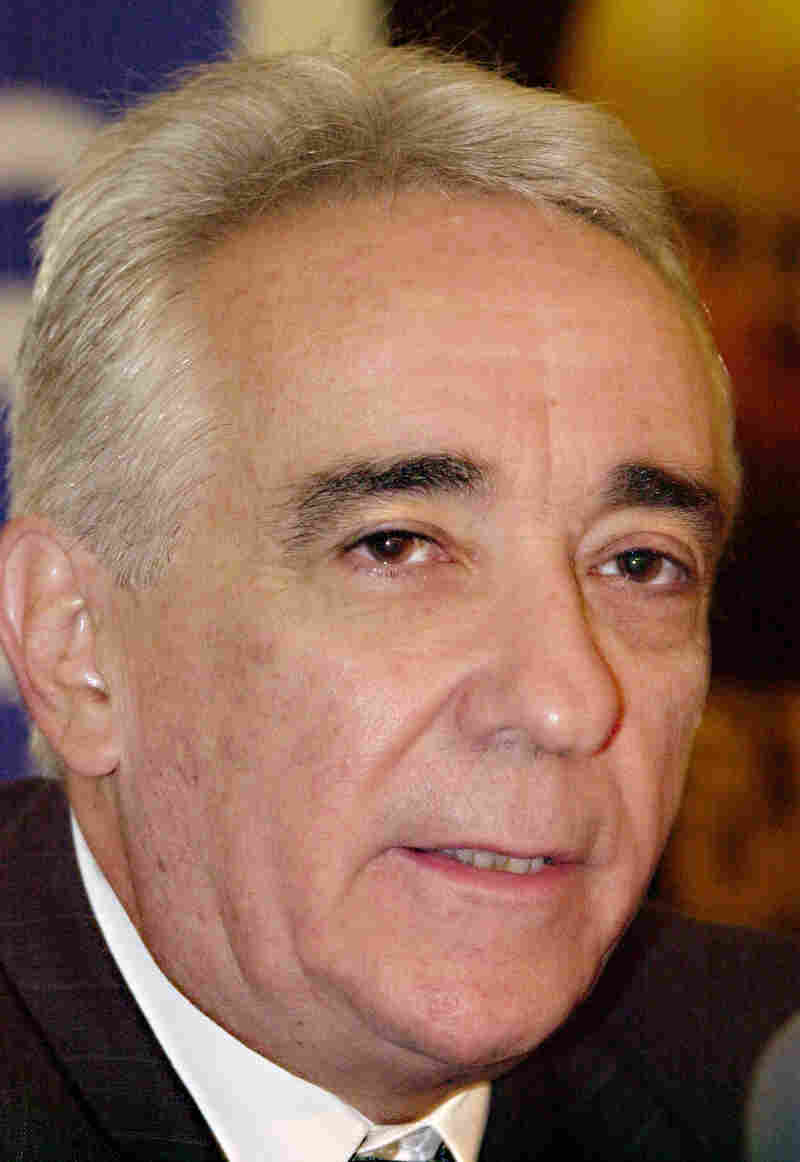 Eladio Larez, the longtime host of Venezuela's version of Who Wants To Be A Millionaire?, would like to offer life-changing sums of money. But, he says, "Every day, there are fewer TV ads because advertisers face critical problems." Luis Romero/AP hide caption

But this turns out to be a poor man's version of the game. The problem is Venezuela's currency. The bolivar has collapsed amid a severe economic crisis. Now, the grand prize of 2 million bolivars amounts to just $2,000.

Most of the prizes are much smaller. Getting past the first question earns contestants 500 bolivars, or 50 U.S. cents. They get another 80 cents for nailing Question 2.

It goes on like this. Angel Mora, who works for a trucking company, does well until flubbing the ninth question. His total take amounts to $12 — maybe enough to buy a simple lunch for a family of four.

Backstage, Mora says his real earnings will be even less because 34 percent of that $12 goes to taxes. 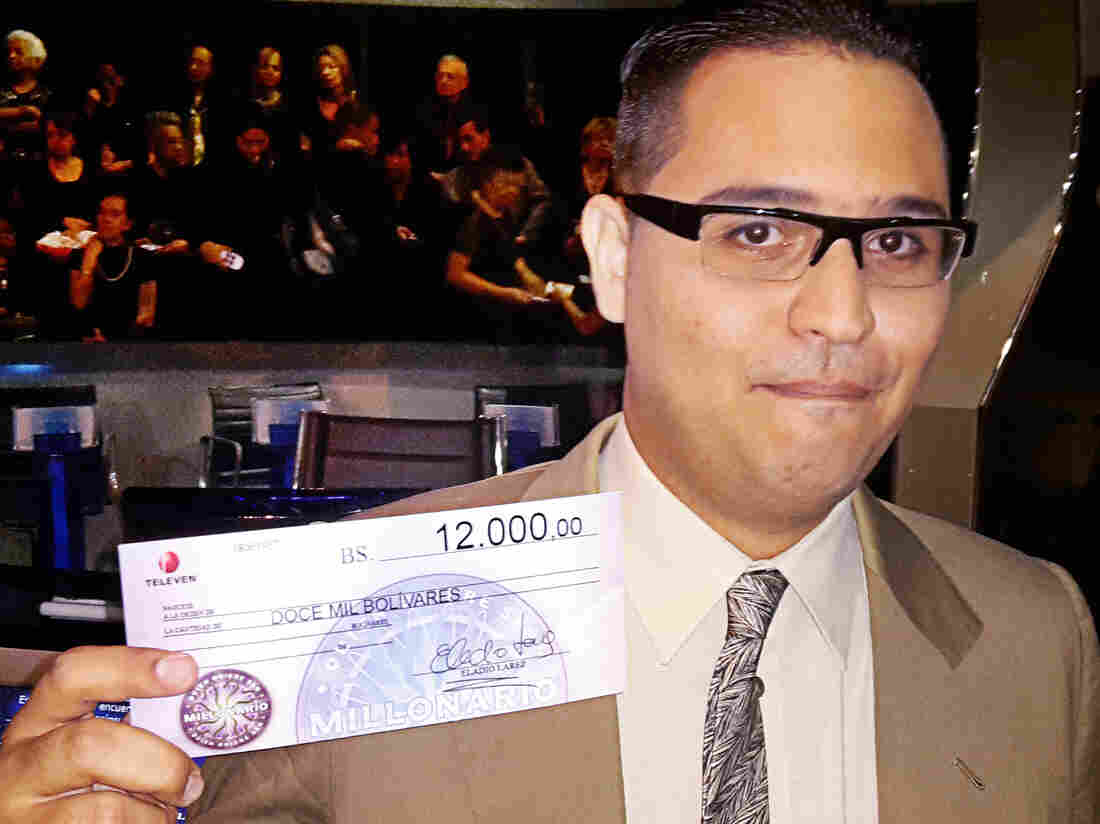 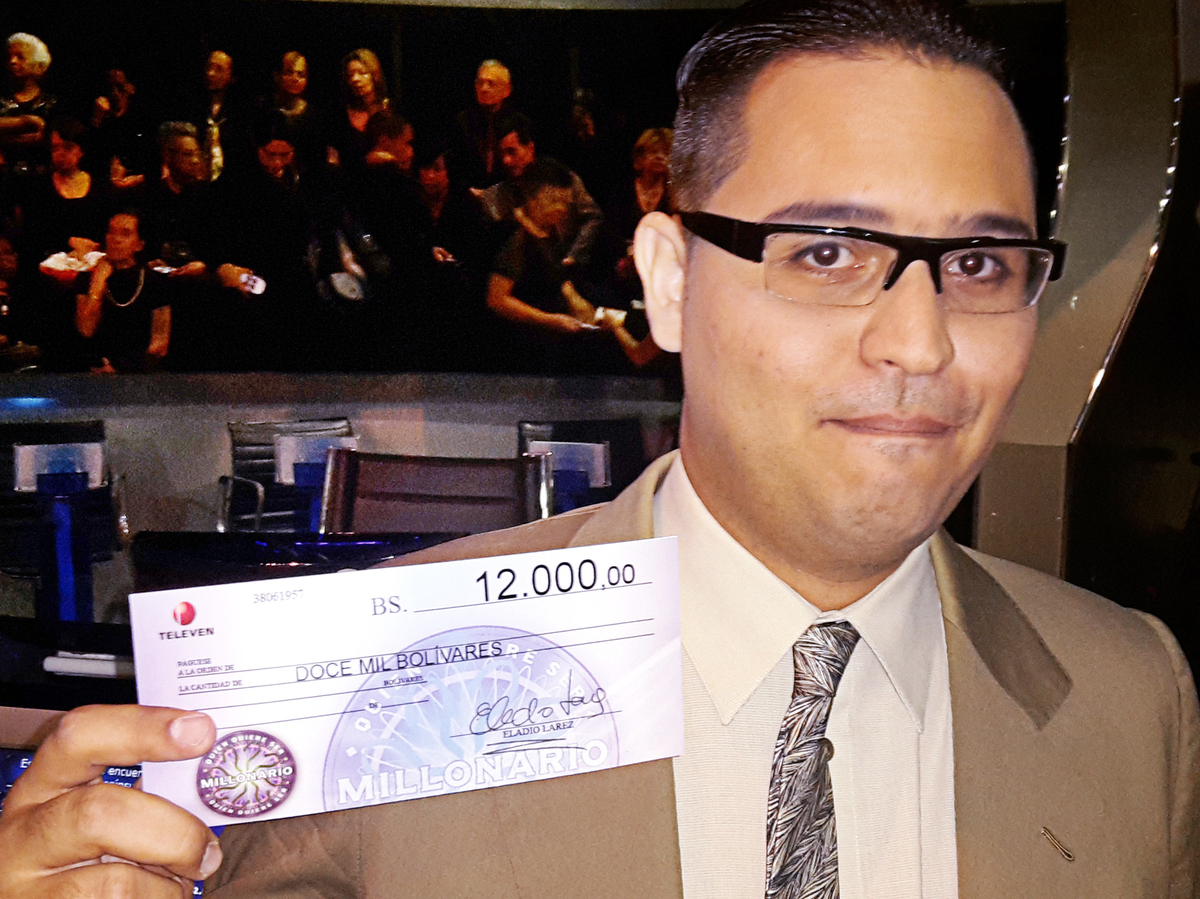 Angel Mora's winnings were equal to $12.

The dapper, silver-haired Larez, who's hosted the show for 16 years, would like to offer life-changing sums of money. But due to Venezuela's economic meltdown, businesses are shutting down. And that's squeezing TV stations.

"Every day, there are fewer TV ads because advertisers face critical problems," Larez says. He, too, has taken a hit, and his salary is worth far less now than it once was, due to devaluations and triple-digit inflation.

The result is cash prizes so devalued that the name of the show ought to be changed, says contestant Adi Slivvka, who is here with her husband, Jesus Guillen.

"The program's name must be another," says Guillen.

"Yes. Yes," Guillen says. "Something like that, because Who Wants to be a Millionaire? It's not true."

Still, the show remains one of Venezuela's top-rated programs and hundreds of people call the studio every week clamoring to participate.

Show producer Reyna Mogollon says the thrill of being on TV and playing Millionaire is often prize enough. But not for contestant Aiskel Seijas, a 58-year-old security guard.

Seijas says she needs a new pacemaker. Her plan was to pay for the $1,000 operation with a big check from the show.

For awhile, her scheme works. She's finally ousted on the 10th question, when she names Atlanta rather than Memphis as the city where Martin Luther King Jr. was assassinated.

Even though Seijas made a deep run on the program, the pacemaker will have to wait. Her total take is just $19.