Accessibility links
Clinton And Trump: The World, In Their Own Words : Parallels Foreign policy is usually a campaign afterthought. But the next president will inherent a raft of global challenges, from ISIS to trade deals to a pivot to Asia. 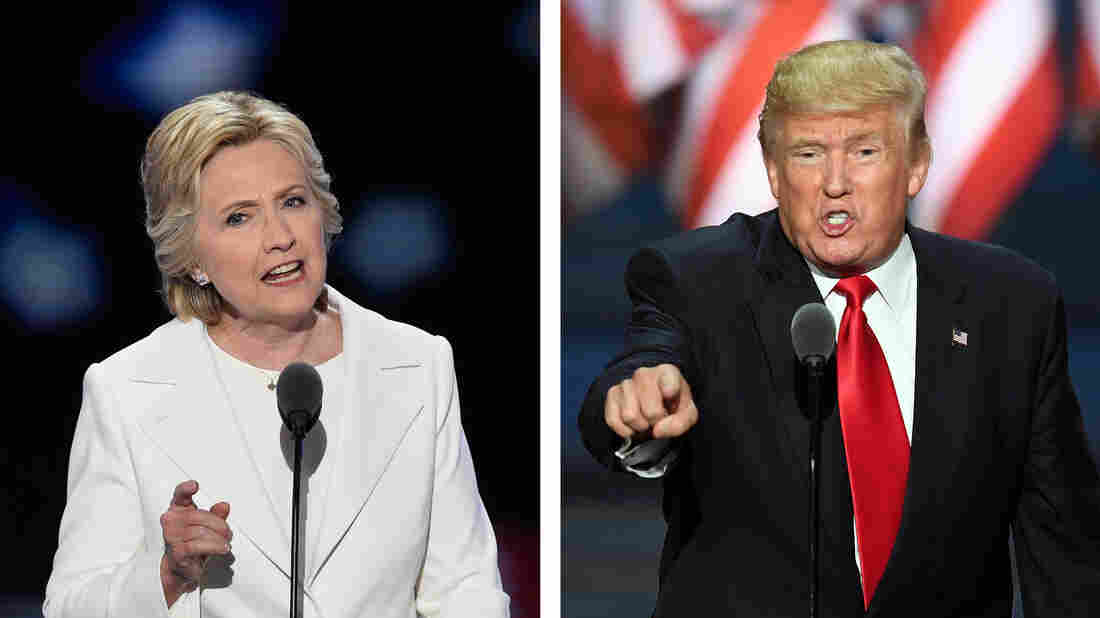 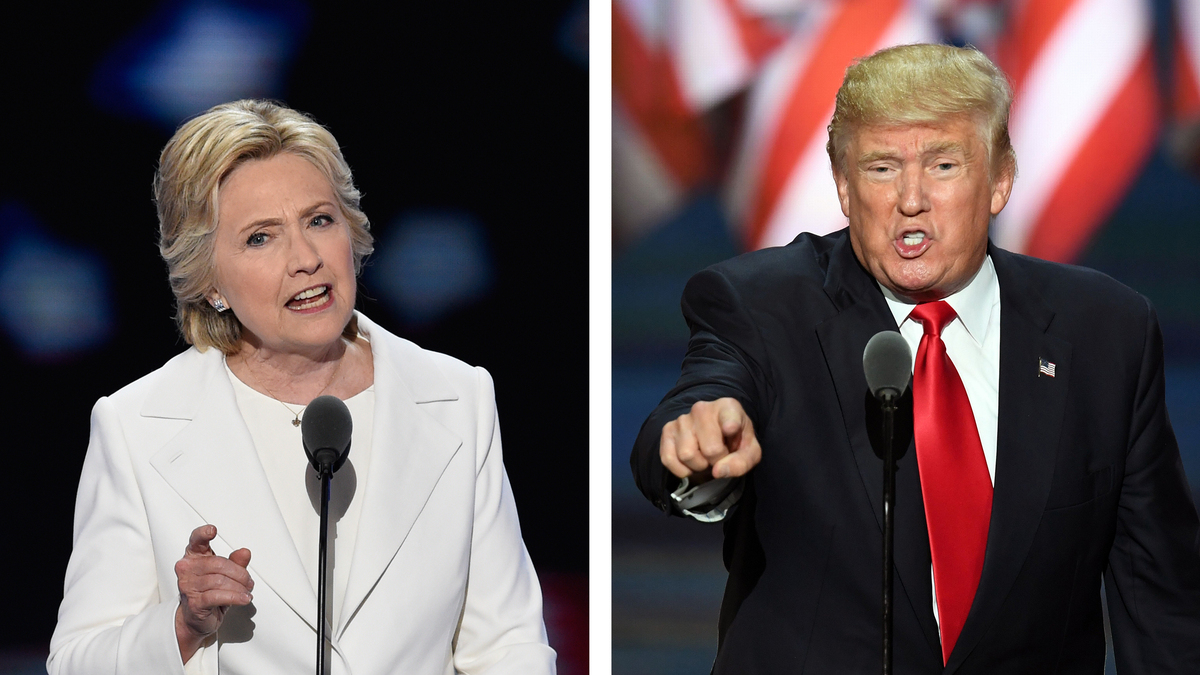 As the presidential campaign heads into its final months, the U.S. is carrying out daily air sorties in Syria, Iraq and Afghanistan. A major trade deal, the Trans-Pacific Partnership, waits in limbo. The U.S. has begun a long-term pivot to Asia and is bringing more Syrian refugees into the country.

Foreign policy is usually a campaign afterthought. But the next president will inherit a raft of global challenges in January. And compared with domestic issues, which can often depend on congressional legislation, the president has much greater leeway to act independently in foreign affairs.

Donald Trump's repeated controversial statements and Hillary Clinton's emphasis on her diplomatic experience as the former secretary of state have also been pushing foreign policy and national security front and center this year.

Here, in their own words, are some of Trump's and Clinton's remarks on global affairs:

ISIS and the Middle East

"I know more about ISIS than the generals," Trump said in November, in line with his repeated pledges to ramp up U.S. military action against Islamist extremists on multiple fronts.

National security experts of all stripes, including some retired generals, have taken umbrage and questioned his qualifications to be commander in chief.

"We must abandon the failed policy of nation-building and regime change that Hillary Clinton pushed in Iraq, in Libya, in Egypt and in Syria," Trump said at the Republican National Convention on July 21. "Instead, we must work with all of our allies who share our goal of destroying ISIS and stamping out Islamic terrorism and doing it now, doing it quickly."

Clinton, meanwhile, says she too would step up action against ISIS with an intensified bombing campaign.

"We will strike their sanctuaries from the air, and support local forces taking them out on the ground. We will surge our intelligence so that we detect and prevent attacks before they happen," she told the Democratic National Convention on Thursday night.

Clinton says she won't send in U.S. ground troops. Trump has suggested at times he would use ground troops but has stayed away from making such remarks recently.

The U.S. currently has nearly 10,000 military personnel in Afghanistan, more than 5,000 in Iraq and several hundred in Syria. They are mostly involved in training, advising and the air campaigns.

Over the years, Clinton has called Russian President Vladimir Putin a "bully," and while running for president eight years ago, she said he "doesn't have a soul."

Shortly after becoming the top U.S. diplomat in 2009, amid deteriorating relations between the U.S. and Russia, Clinton hit the "reset button" with Russia's foreign minister. But it didn't take. In the years since, the U.S. and Russia have tangled over Syria, Ukraine and Libya, among many other issues.

At a debate in January, Clinton characterized her dealings with Putin:

"Well, my relationship with [Putin], it's — it's interesting. It's one, I think, of respect. We've had some very tough dealings with one another. And I know that he's someone that you have to continually stand up to because, like many bullies, he is somebody who will take as much as he possibly can unless you do."

Trump, meanwhile, has spoken favorably of Putin, who has in turn praised Trump as "a talented person."

Trump said Wednesday he would "treat Vladimir Putin firmly, but there's nothing I can think of that I'd rather do than have Russia friendly, as opposed to the way they are right now, so that we can go and knock out ISIS with other people."

But Trump has sounded much less troubled than most. When asked about it in July 2015, just after he entered the presidential race, he said, "Europe isn't complaining as much as we are. But this is more of a Europe problem."

Asked Wednesday if he would recognize Crimea as Russian territory, he said, "Yes. We would be looking at that."

It's safe to say the trans-Atlantic alliance has never received this much attention in a U.S. presidential campaign.

Trump made it a hot-button issue by questioning NATO's Article 5, which says an attack on one NATO member is an attack on all and requires a collective response. It has been invoked just once, with NATO countries pledging to defend the U.S. after the Sept. 11 attacks.

"We have many NATO members that aren't paying their bills," Trump told The New York Times.

When pressed on whether he would defend a NATO member under attack, he said it might depend on whether that country was meeting the military spending requirements set by the alliance — 2 percent of GDP.

"You can't forget the bills," Trump added. "They have an obligation to make payments. Many NATO nations are not making payments, are not making what they're supposed to make. That's a big thing. You can't say forget that."

Clinton has emphasized her commitment to NATO, a boilerplate comment that has now become a major applause line. Here's how she described U.S. allies worldwide in a June 3 national security speech in San Diego:

"Our armed forces fight terrorists together; our diplomats work side by side. Allies provide staging areas for our military, so we can respond quickly to events on the other side of the world. And they share intelligence that helps us identify and defuse potential threats."

Trump hasn't backed off. In his convention speech, he suggested his remarks are having an impact:

"Recently I have said that NATO was obsolete, because it did not properly cover terror," he said. "Shortly thereafter, it was announced that NATO will be setting up a new program in order to combat terrorism — a true step in the right direction."

Trade was another safe, dull, bipartisan campaign topic prior to this year. The main risk to the candidate who raised it was being ignored.

Trump made it a front-burner issue by focusing on China's huge trade surplus with the U.S. and the Trans-Pacific Partnership, Obama's signature trade deal. It involves the U.S. and 11 other nations, but not China. The Obama administration says it is important to lock in the arrangement, so China doesn't end up setting its own rules.

"Our horrible trade agreements with China and many others will be totally renegotiated," Trump said in his speech at the Republican convention.

The U.S. and China have no bilateral trade agreements, but the U.S. supported China's 2001 entry into the World Trade Organization.

When she was secretary of state, in 2012, Clinton called the Trans-Pacific Partnership "the gold standard in trade agreements."

But after entering the presidential race last year, she said it had fallen short.

"It was just finally negotiated last week, and in looking at it, it didn't meet my standards," she said last October. "My standards for more new, good jobs for Americans, for raising wages for Americans. And I want to make sure that I can look into the eyes of any middle-class American and say, 'This will help raise your wages.' And I concluded I could not."

Clinton supported and opposed various trade deals when she was in the Senate. When she was first lady, she spoke out in favor of the NAFTA trade agreement with Canada and Mexico, but in more recent years she has criticized it, even calling it a "mistake."