Accessibility links
For Post-Brexit British Vacationers, Staying Home Now Seems Appealing : Parallels In the weeks since British voters chose to leave the EU, the value of the pound has dropped steeply. That's made European vacations more expensive — and staying in the U.K. more attractive. 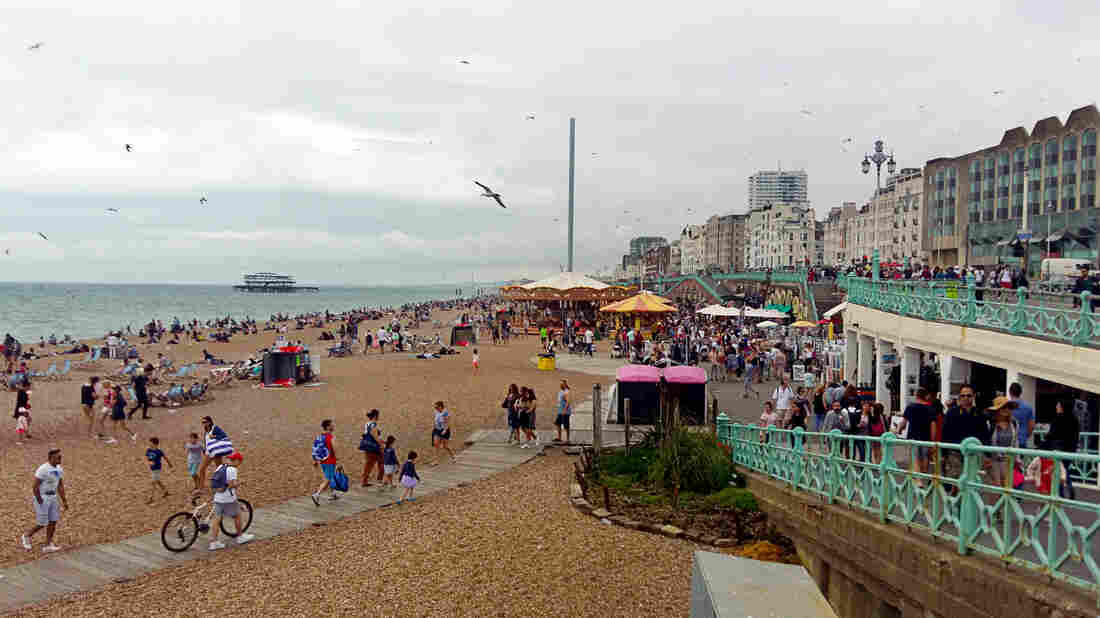 Despite cloudy weather, beaches are packed in Brighton, England. With airfares rising and the British pound down after the Brexit vote, some Britons are vacationing closer to home. Lauren Frayer for NPR hide caption 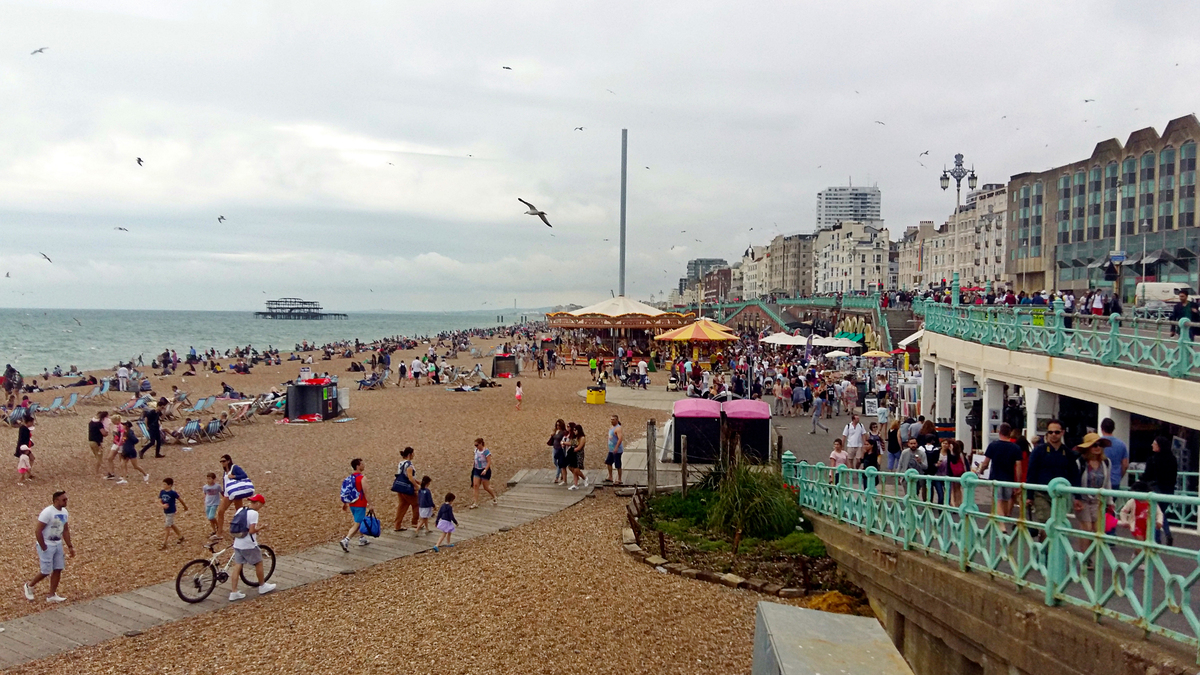 Despite cloudy weather, beaches are packed in Brighton, England. With airfares rising and the British pound down after the Brexit vote, some Britons are vacationing closer to home.

It may be cloudy and cold, with stones rather than sand underfoot, but the English seaside could get an unexpected boost this summer — courtesy of the Brexit.

Britain's June vote to leave the European Union has depressed the value of the British pound, and is likely to make Britons' airline tickets more expensive for summer vacations. So many are opting for "staycations" instead.

"In my circle of friends, I suspect many people will stay in the U.K. as opposed to going abroad," says Matthew Kirk, 42, who works in IT in London.

Kirk and his wife opted for a cheaper, two-hour drive to the Brighton seaside this year rather than flying to sunny Spain with their two children, as they've done in previous years.

"It's airfares and the exchange rate — you get less for your pound," Kirk explains. "The dawn of cheap air travel has fundamentally changed how Brits view holidays. In previous years, it's been as cheap, if not cheaper, to go to Spain for two weeks. I think Brits have gotten used to that, and I suspect in the future that might turn around the other way."

Last weekend, when British schools got out for the summer, there were 16-hour delays at the main ferry crossing to France, as families set off to Europe by car rather than by plane. The delays were also partly due to increased security on the French side amid a state of emergency after terror attacks.

The pound hit a 31-year-low against the U.S. dollar this summer, after the Brexit vote. Stocks in British airlines have slumped as their profits take a hit from the weaker currency.

The low-cost airline easyJet — which, like most U.K. carriers, buys fuel in U.S. dollars — says its costs increased by $53 million in the month after the Brexit vote. The airline's CEO has said she wants the government to issue a timeline for its exit from the bloc. 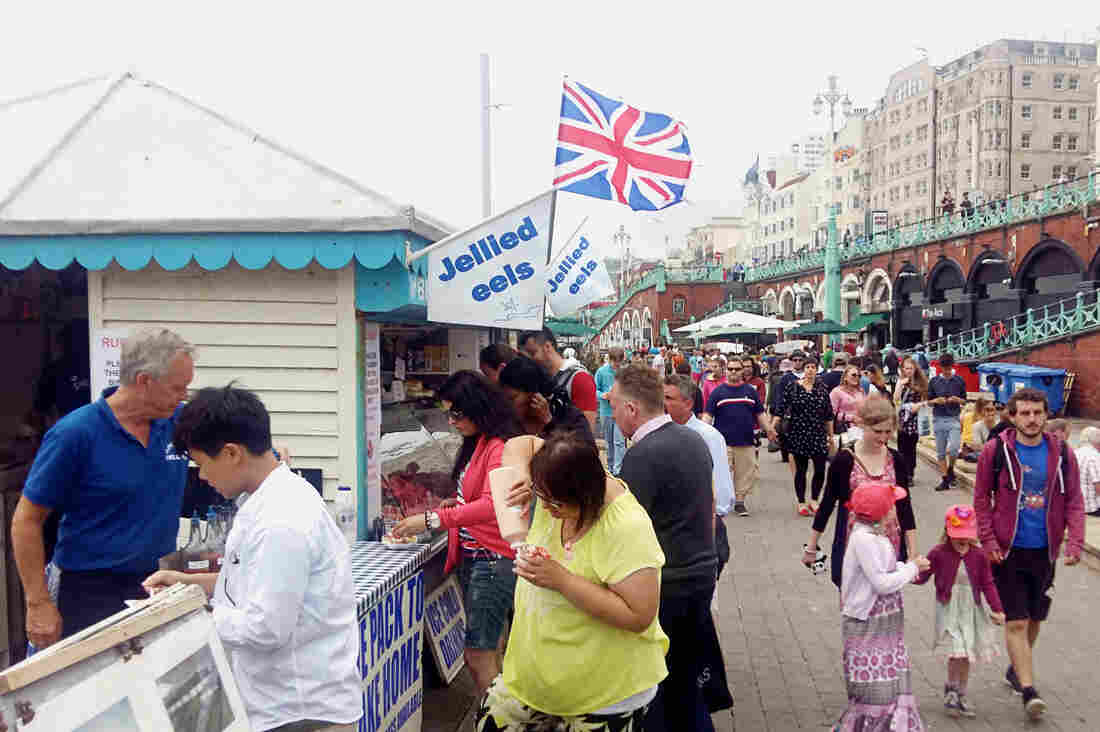 Cliff Faires (left, in blue shirt) is the owner of the Brighton Shellfish & Oyster Bar. He started selling seafood on the Brighton boardwalk as a relaxed, retirement gig 10 years ago. But Brexit is already hurting his bottom line. Lauren Frayer for NPR hide caption

Europe's largest low-cost airline, Ryanair, with hubs in Dublin, where the company is based, and in London, says it's "pivoting" away from U.K. airports in favor of others on the European continent. CEO Michael O'Leary called Brexit "a surprise and a disappointment."

"If it's a full exit and the U.K. has to abide by the [World Trade Organization] rules and negotiate bilateral agreements with the EU and other countries, that may have an impact on our domestic U.K. routes," Ryanair's chief financial officer, Neil Sorahan, told investors this week. "We may have to cancel those."

While all this uncertainty is likely to make airfares more expensive for Britons, it's done the reverse for foreigners flying into the U.K. They've seen prices drop to a three-year low. Americans will find their dollars go further in Britain these days.

The British Hospitality Association says domestic bookings are up this summer. Mom-and-pop vendors are hoping that makes up for the higher costs they're absorbing.

"Our prices are going up because most fish is bought with the dollar. Our suppliers buy in dollars. So the conversion — it just makes it a bit more expensive," says Cliff Faires, owner of the Brighton Shellfish & Oyster Bar.

Faires started selling seafood on the Brighton seafront as a relaxed, retirement gig 10 years ago. But Brexit is already hurting his bottom line.

Just off a beachfront carousel, Matthew Kirk's little boy squeals for ice cream. His dad says British resorts, some of which have seen better days, could rebound amid all this. Kirk says he's happy to help the local U.K. economy.

"It'd be nice to see them making a living and thriving," he says. "I suppose that if there's a silver lining in every cloud, this is it."