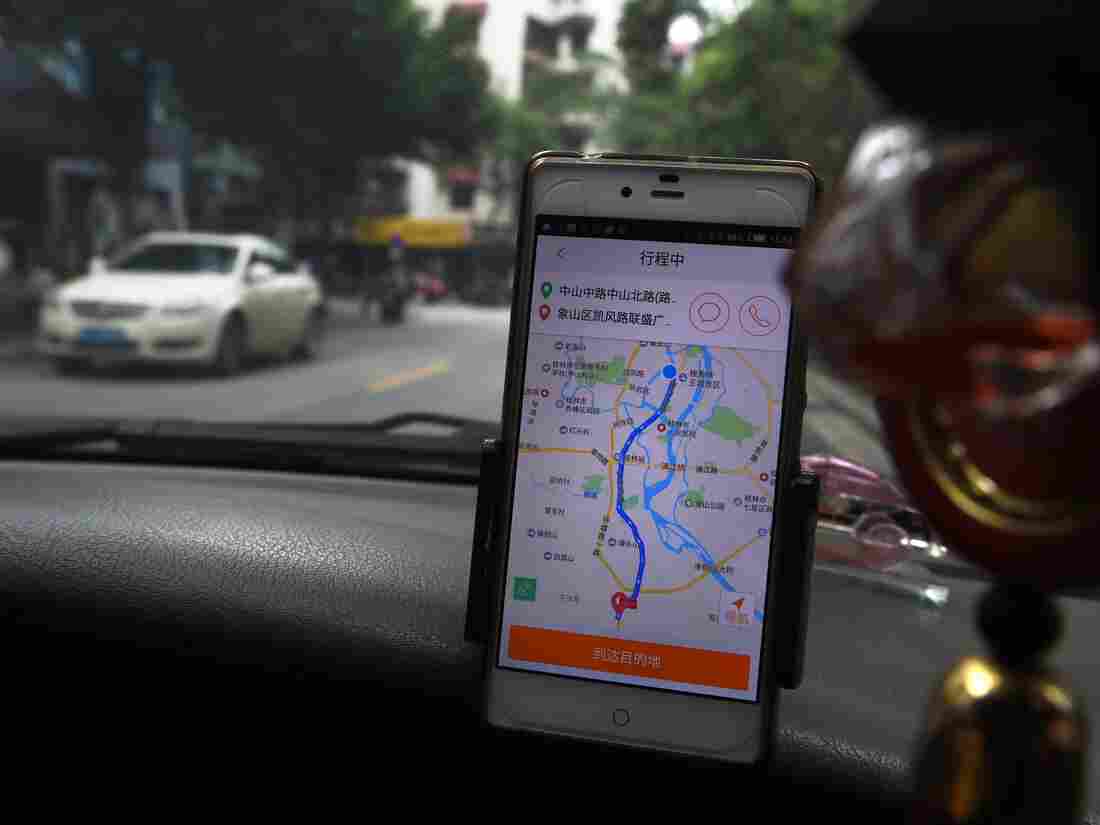 A taxi driver uses the Didi Chuxing app in Guilin, in China's southern Guangxi region, on May 13. The company is joining up with Uber's Chinese unit, its former rival. Greg Baker/AFP/Getty Images hide caption 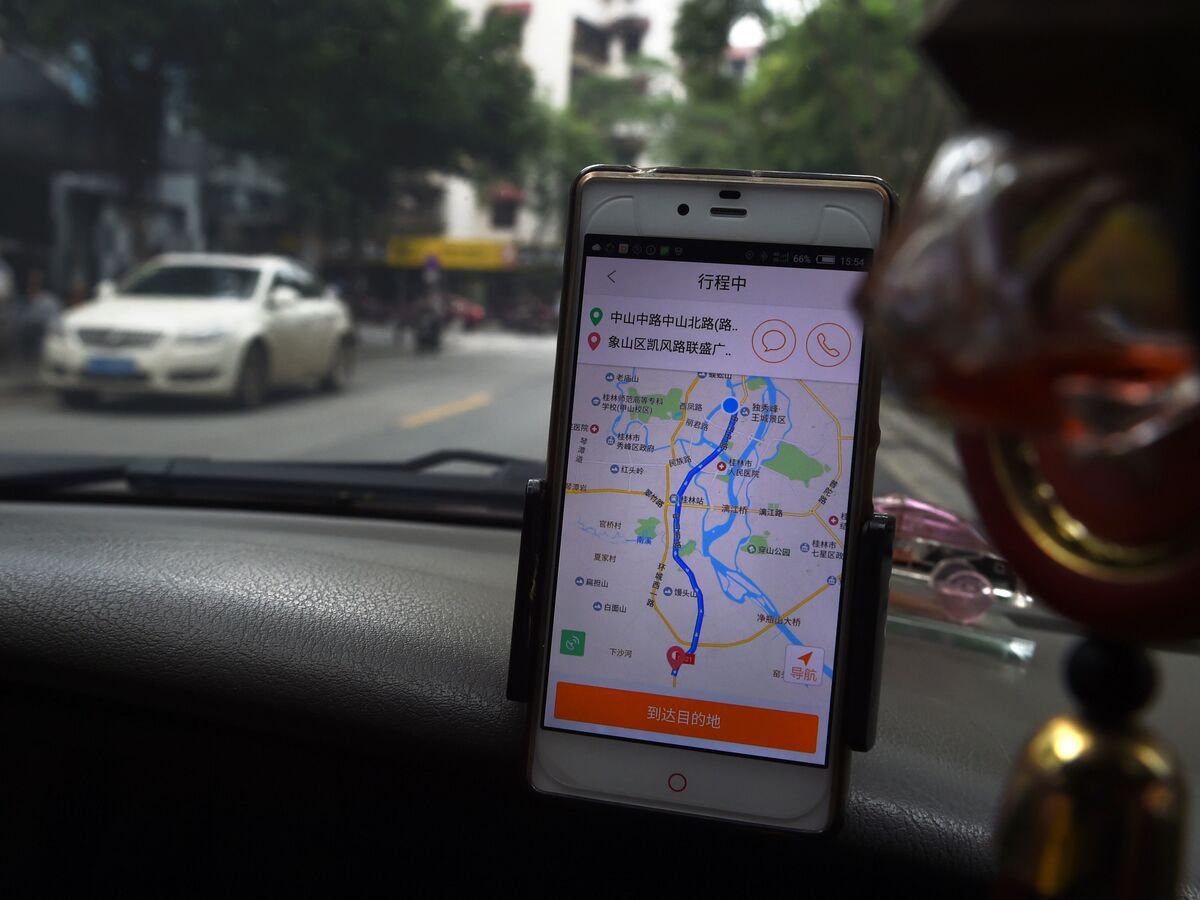 A taxi driver uses the Didi Chuxing app in Guilin, in China's southern Guangxi region, on May 13. The company is joining up with Uber's Chinese unit, its former rival.

The days of cutthroat competition between Uber's China arm and its local rival Didi Chuxing appear close to an end, following a landmark merger creating a colossal ride-hailing company worth an estimated $35 billion.

The deal, announced Monday, comes just days after China became the largest major economy to legalize the ride-hailing industry, in a move that could have significant impact on China's transition to a new economic model.

To gauge how folks in the business are reacting, I hailed a ride in the Nissan sedan of 33-year-old Wang Xiaoliang. He was a driver for a Beijing construction company before joining Didi six months ago.

He says the price wars between Didi and Uber have been ferocious, with both companies doling out huge discounts to passengers.

"I heard that one day, Uber was giving rides at a 90 percent discount," he recalls. "On that day, we Didi drivers could hardly get any riders at all."

In recent months, though, new drivers have been piling into the business in droves, driving down the bonuses ride-hailing companies pay their drivers. Wang says his job's pay is not great, but he likes the freedom of being able to set his own hours.

Wang adds that the news of the merger caught him off guard, but he's encouraged by it.

"I'm happy about the news, because it means Didi is growing stronger," he says. Uber's a big platform, and I think it will help Didi improve."

Under the terms of the deal, Uber will get an 18 percent stake in Didi, and Didi will invest $1 billion in Uber. Uber China will continue to operate independently under its own brand. 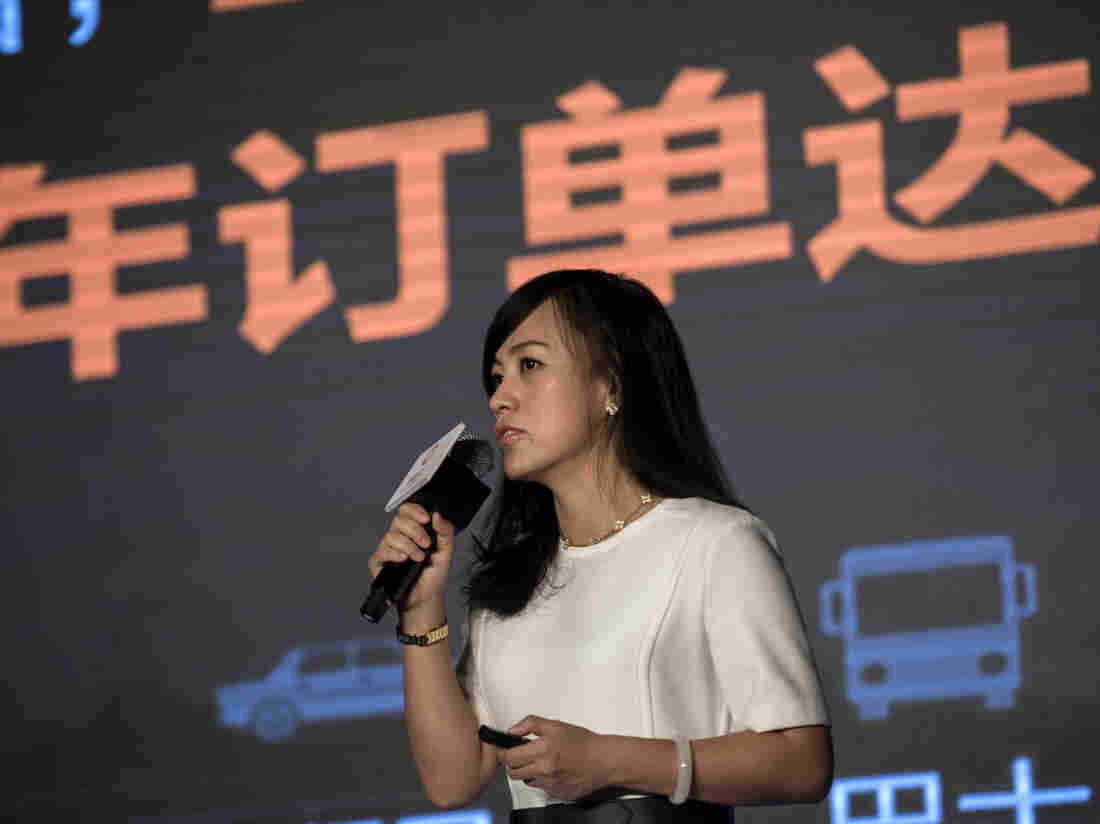 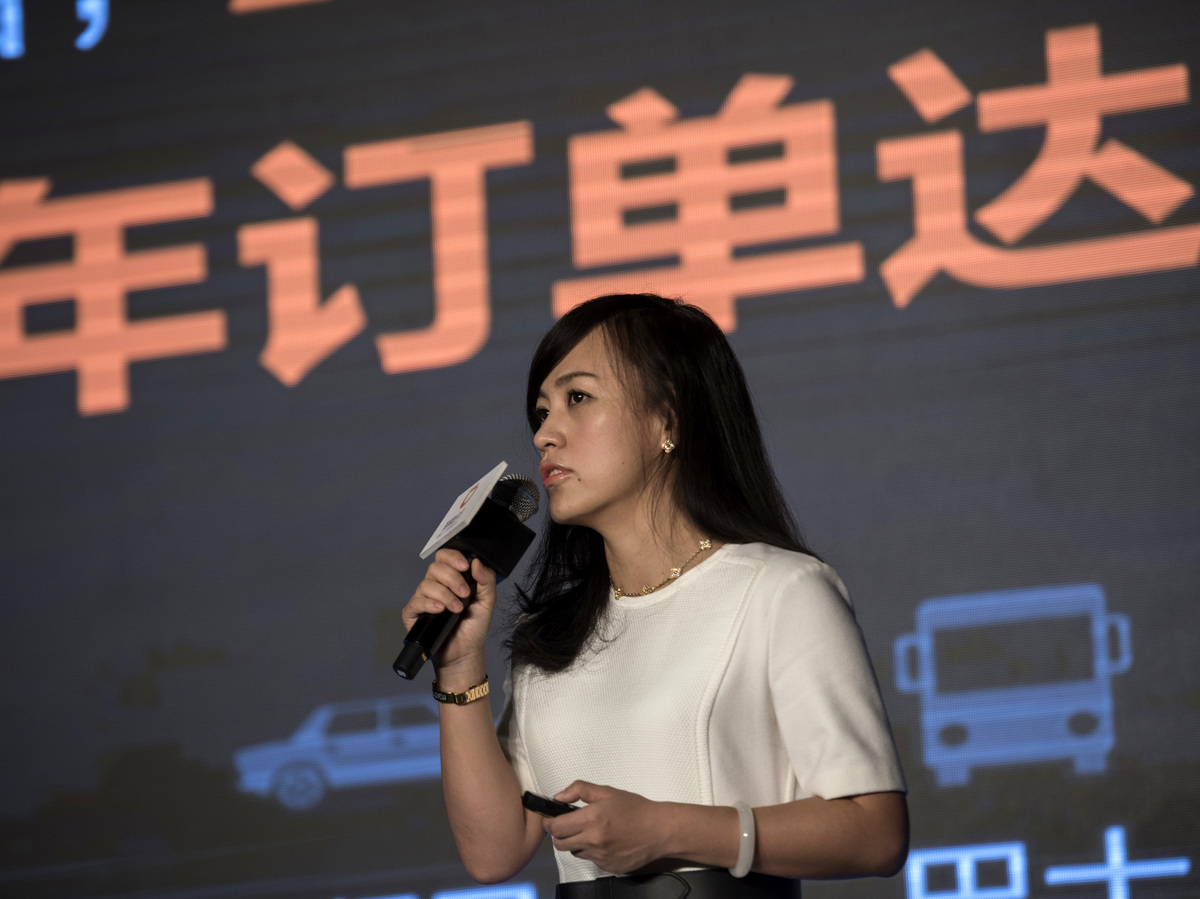 Liu Qing is the president of Didi Chuxing, China's leading ride-hailing company, worth an estimated $35 billion.

One of the reasons ride-hailing services have taken off in China is that in many cities like Beijing, taxi companies are monopolized by government-linked companies, which tend to be unresponsive to consumer demands.

But the merger creates a new, near-monopoly, leaving perhaps less than 10 percent of the market to minor players such as Shenzhou and Yidao.

Some observers describe the merger as a setback for Uber, which has made the China market a top priority. The San Francisco-based company spent $1 billion in China last year, mostly to get a bigger market share. But it got a share of only around 10 percent, compared to Didi's more than 80 percent.

Then again, some analysts believe that Uber acquitted itself respectably, given the difficulty of any major foreign tech company that chooses to go it alone in the China market.

Teaming up "with a local partner to integrate the technology with the local culture is extremely important," says Kitty Fok, managing director of IDC China, a consulting firm. "That's why we see a lot of joint ventures happening in China."

In that sense, she says, "I really think that this [merger] is actually a very clever move for Uber."

Fok says that Didi has a considerable home court advantage. It commands more name recognition in China, it enjoys close relations with the government, and it has been faster at offering new services that local consumers want, such as buses and carpools. 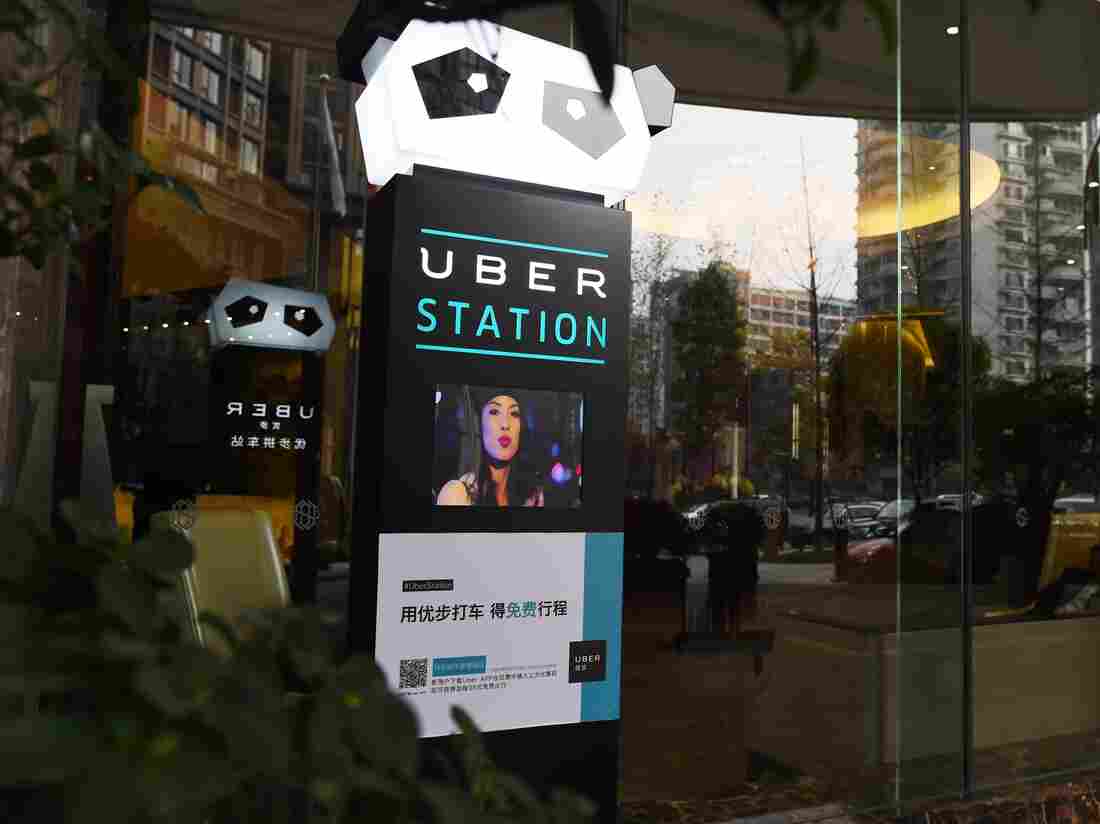 An Uber Station is shown outside a hotel in Chengdu, in southwest China's Sichuan province. Uber spent $1 billion in China last year, but only got a share of around 10 percent, compared to Didi Chuxing's more than 80 percent. Greg Baker/AFP/Getty Images hide caption 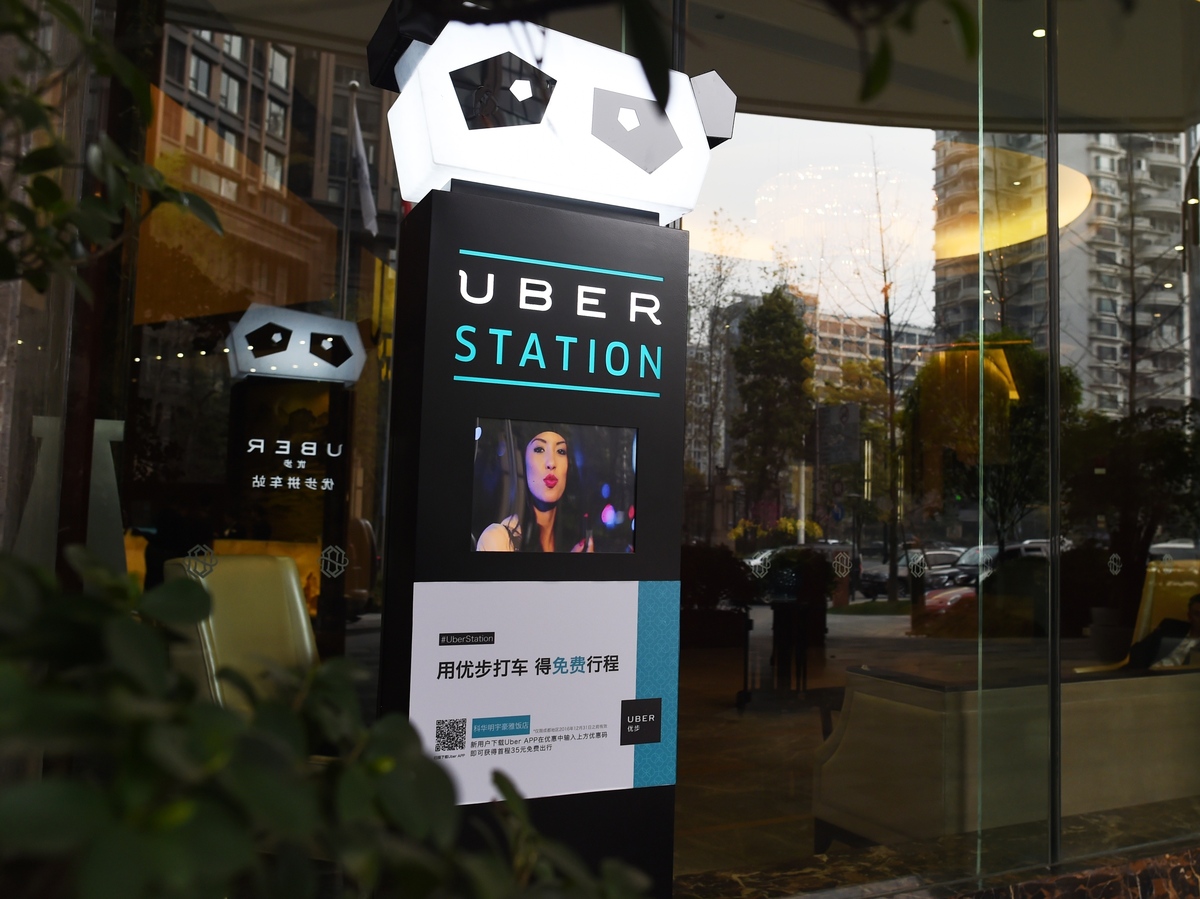 An Uber Station is shown outside a hotel in Chengdu, in southwest China's Sichuan province. Uber spent $1 billion in China last year, but only got a share of around 10 percent, compared to Didi Chuxing's more than 80 percent.

It gives 15 million rides a day, and has 300 million registered users — almost the population of the U.S. It operates in some 400 Chinese cities. Uber is in just 60.

Didi also has deep pockets with which to wage price wars, thanks to the backing of China's Internet giants, Alibaba and Tencent. Apple also recently invested $1 billion in Didi.

Both Uber and Didi succeeded in lobbying the Chinese government to issue regulations last week legalizing the ride-hailing business, after years in which the companies operated in a gray zone.

The companies convinced the government that they could help it to realize its goal of using the Internet as a catalyst for entrepreneurship, technical innovation and job creation. The government has dubbed this goal "Internet Plus."

Part of this is helping China to shift from an economy based on industry and exports to services and consumption. At the moment, Beijing is working hard to shut down steel and coal plants that have created a vast oversupply of raw materials.

In a recent report to the government, Didi boasted that it had absorbed more than half a million coal and steel workers, or 60 percent of the workers in those industries that the central government has laid off this year.

Didi and Uber's lobbying efforts appear to have worked. The new regulations also forbid selling services below cost, heralding the end of the recent price wars. Kitty Fok says that the companies are now likely to turn to premium services to provide revenue to subsidize fares.

Fok notes that Uber China and Didi share a personal connection that certainly can't have harmed the merger.

Uber China's Liu Zhen and Didi's Liu Qing are cousins, and are respectively the niece and daughter of Liu Chuanzhi, the founder of the Lenovo Group, the world's largest computer maker, which acquired IBM's personal computer business.

It's therefore not a huge stretch to say the merger of Uber and Didi is just a way of keeping the competition — and most of China's ride-hailing business, for that matter — all in the family.