Accessibility links
As U.S. Politicians Shun Syrian Refugees, Religious Groups Embrace Them : Parallels Faith-based groups are challenging political opposition to Syrian refugees and taking a leading role in resettling them in the U.S. They've provided shelter, jobs and schooling for the newly arrived. 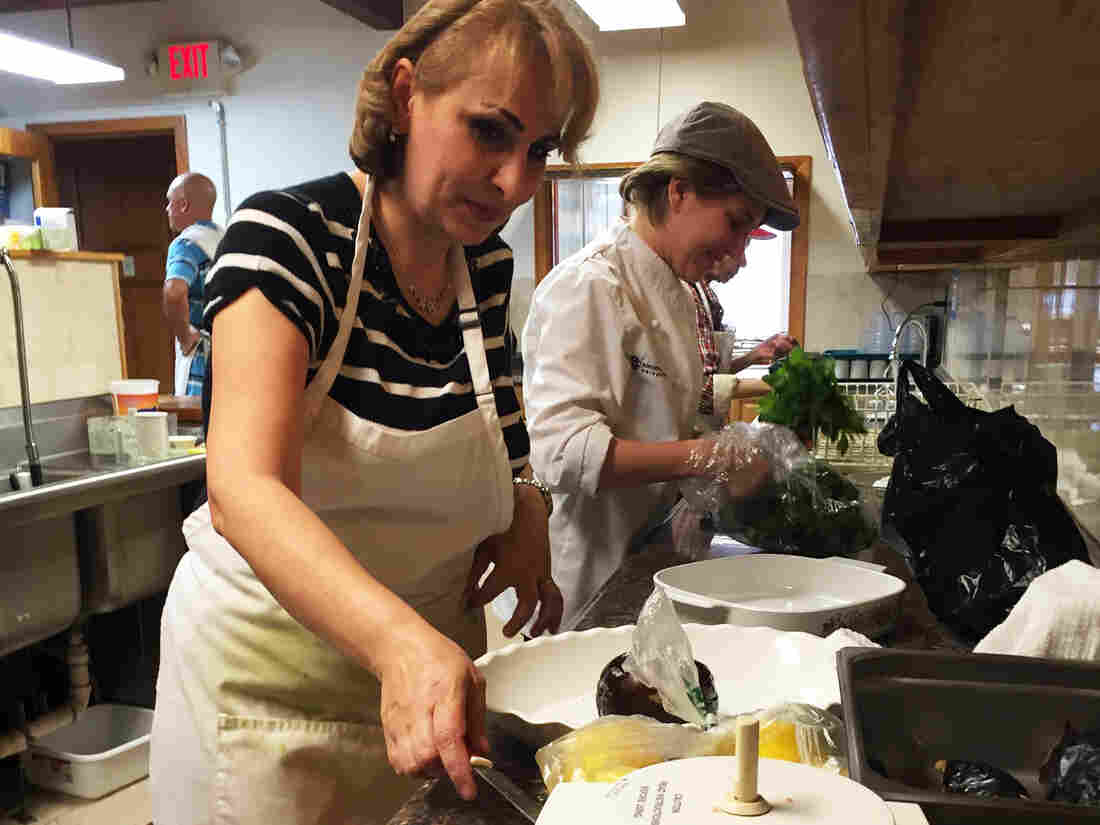 Najla cooks for Syria Day at Global Grace Café at the Reformed Church of Highland Park in New Jersey. Najla is from Syria and arrived in the U.S. 10 months ago with her husband and daughter after the United Arab Emirates canceled a residency permit, ending her job at an insurance company. Deborah Amos/NPR hide caption 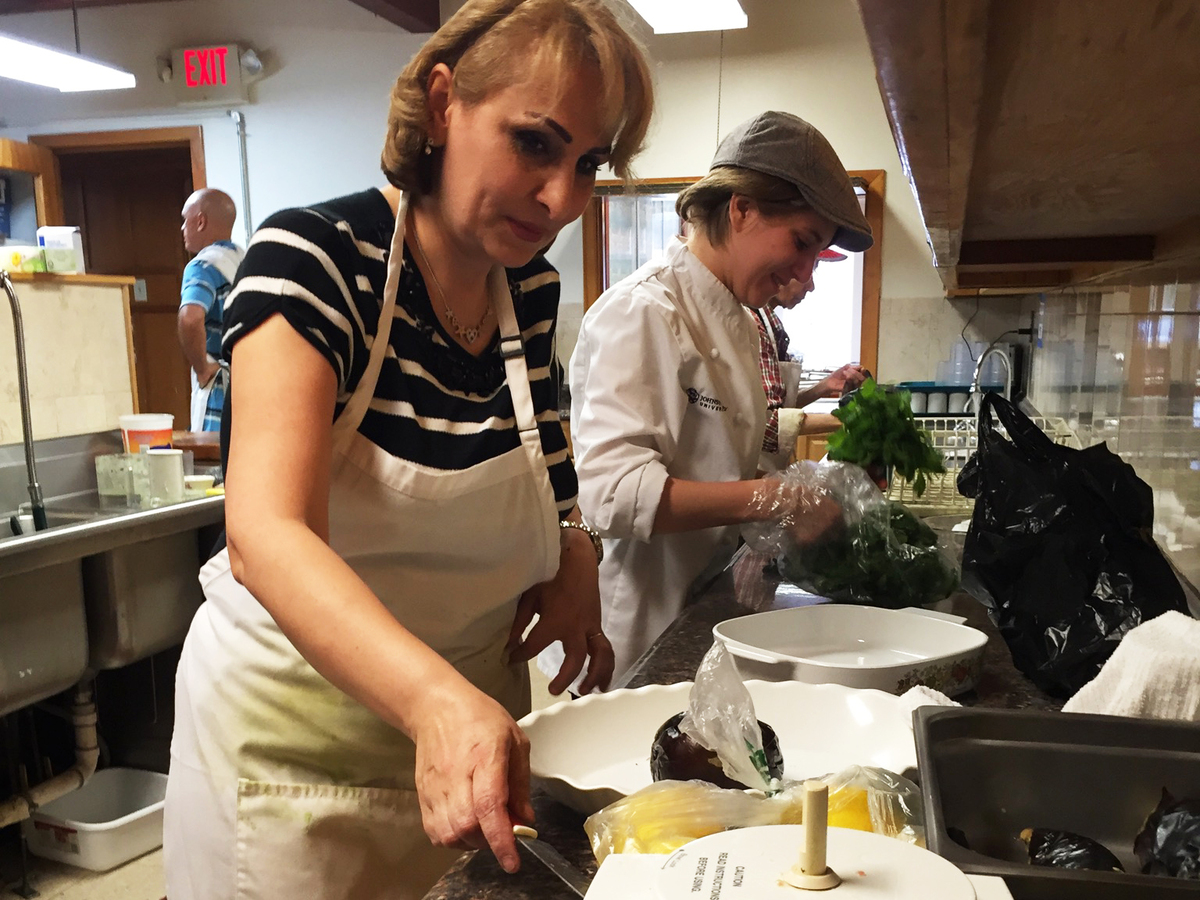 Najla cooks for Syria Day at Global Grace Café at the Reformed Church of Highland Park in New Jersey. Najla is from Syria and arrived in the U.S. 10 months ago with her husband and daughter after the United Arab Emirates canceled a residency permit, ending her job at an insurance company.

When 31 governors called for a ban on Syrian refugees coming into the U.S. after last November's terrorist attacks in Paris, it united faith-based communities across the country. They are challenging the wave of opposition to these refugees by taking a leading role in resettling them.

"If they didn't have the churches and synagogues providing what they do, this system would collapse," says Jennifer Quigley, referring to the federal resettlement program that is now under attack from Congress and many governors.

Quigley is a strategist for refugee protection with Human Rights First, an advocacy group that has pressed the administration to increase Syrian resettlement from the pledged goal of 10,000 in 2016 to 100,000 in fiscal year 2017.

U.S. Is On Target To Accept And Resettle 10,000 Syrian Refugees

"Refugees are facing crises every day against extremists in the world. We need to stand with refugees, especially now," he says.

Kaper-Dale and his wife, Stephanie, serve as co-pastors at the Reformed Church of Highland Park. Their local interfaith coalition has supported 14 refugees so far this year from countries including Colombia and Syria.

In addition, Kaper-Dale's church is supporting a Syrian family applying for asylum.

Their interfaith coalition is committed to resettling 50 more refugees from Africa and the Middle East, who are expected to start arriving in the fall.

"Five major faiths showed up, stopping at seven houses of worship to hear Scripture and proclamations from community leaders about why we are to welcome refugees," says the 37-year-old activist pastor.

Even as Congress and President Obama fight over whether to accept Syrians under the current federal program, there is a "real desire at the grass roots, stepping up to the plate in new ways," says Shaun Casey, the State Department's special representative for religion and global affairs.

"Different religious communities are meeting each other for the first time over refugee resettlement. It's happening all across America," he says. "They are all animated by theology; this is fundamentally who they are."

At the Highland Park Reformed Church, the commitment to the gospel is demonstrated in the church kitchen, where the smell of baked chicken and Middle East spices gusts from the oven. In April, the church opened the Global Peace Café, a community-based restaurant. The menu is as varied as the refugee chefs who cook here. 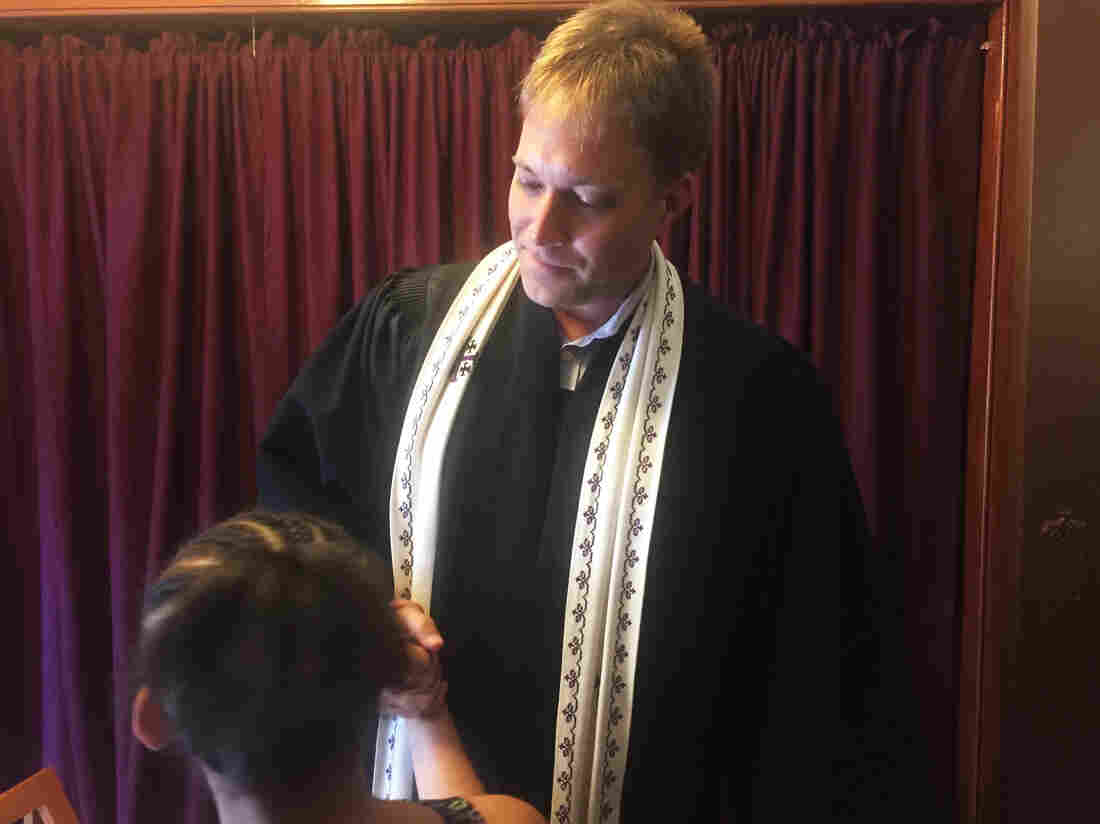 The Rev. Seth Kaper-Dale shakes hands after a service at the Reformed Church of Highland Park. Deborah Amos/NPR hide caption 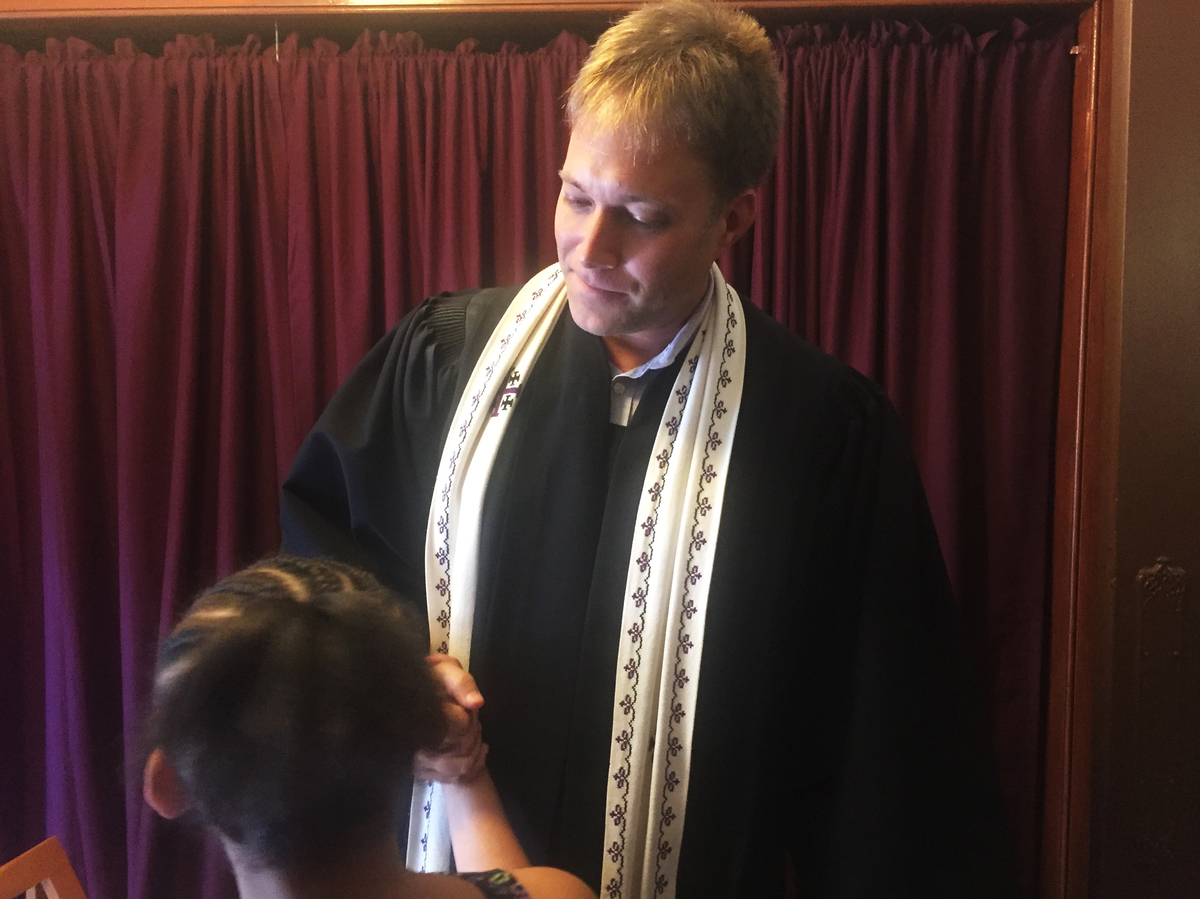 The Rev. Seth Kaper-Dale shakes hands after a service at the Reformed Church of Highland Park.

"We have Najla from Syria, we've got Yvonne from the Congo, we've got Jose from Colombia," says Kaper-Dale, introducing the kitchen staff on the day of my visit.

At a time when the dominant political narrative paints refugees as a security risk, the café demonstrates that refugees have something to offer, he says — a positive picture "around empowering people as they come to this country for the first time."

Syria is on the menu when I visit. Najla is the day's chef. She asks to withhold her last name to protect relatives still in Syria. She supervises the cooks, and chops neat piles of mint, lemons and eggplant. Then she corrects the spices for a lunch prepared for more than 40 diners, based on recipes from her homeland.

For some local customers, it's their first taste of Syrian cuisine.

"When they taste Syrian food, they like it too much, and they come back again to eat it," she says.

Najla arrived in the U.S. 10 months ago with her husband and daughter, after the United Arab Emirates abruptly canceled a residency permit — which ended her job at an insurance company in Dubai. The family was forced out and feared a return to Syria.

Kaper-Dale's church found out about her case via a nonprofit that helps asylum seekers, and stepped in to contact a lawyer for the U.S. asylum process, found and furnished an apartment — and offered Najla a turn as a chef once a week at the café.

"At the time, we were primed to receive refugees, but no agency was sending them our way. We decided to stretch into Syrian asylees," says Kaper-Dale.

This small church is part of a larger movement of defiant faith-based groups challenging state governors. These groups have had a hand in the majority of resettlement cases in the U.S.

New Jersey's Republican Gov. Chris Christie notified Washington in April that his state would no longer support refugee resettlement. But Christie has no authority over a federal program that has resettled more than 3 million refugees since 1975.

"The state doesn't have any authority to do anything to stop us," says Kaper-Dale. Christie, he says, "has really been a leader in Islamophobia, as far as I'm concerned, in refugee-phobia," but has no legal power to bar refugees.

On weekdays, Kaper-Dale's church is more active than on Sundays. There are prayer groups, an AA meeting, a thrift shop and an after-school program. The largest gathering by far is in the meeting room for the refugee resettlement team.

Kaper-Dale opens the meeting with a short prayer and the group draws up an action plan for the 50 refugees, about 12 families, they expect to be arriving soon.

The committee must find housing, assign drivers for the required medical exams, schedule English classes, get the children registered for school, find jobs for the new arrivals and get them to a mosque on Friday for worship. A full-time social worker is on call for refugees who arrive from war zones and are dealing with trauma and loss.

"We have more congregations who are active in our coalition than we have families arriving," says Kaper-Dale.

Like New Jersey, Kansas also recently bowed out of the federal resettlement program. Both Texas and Alabama sued the federal government in an attempt to halt the resettlement of Syrian refugees. In June, a federal court rejected the Texas lawsuit, citing the 1980 refugee act that bars discrimination against a particular group.

In their haste to bar refugees, "You have these governors who forget the Constitution," Quigley says. "Not only is it unconstitutional, these are victims of ISIS," she says of the Syrians who have been cleared for resettlement by the U.N. refugee agency and an extensive U.S. vetting program. "What's more American than welcom[ing] those refugees?"

For Kaper-Dale, welcoming refugees is at the core of every faith tradition. "We are supposed to be good neighbors," he says, "and especially when someone is a victim of the world's abuse."