Accessibility links
At A New Jersey Mosque, People Of Different Faiths Welcome Syrians : Parallels At a party for Syrian refugees in a New Jersey mosque, Americans of Lebanese and Pakistani descent and a Jewish family offer help and stories of their own immigrant backgrounds. 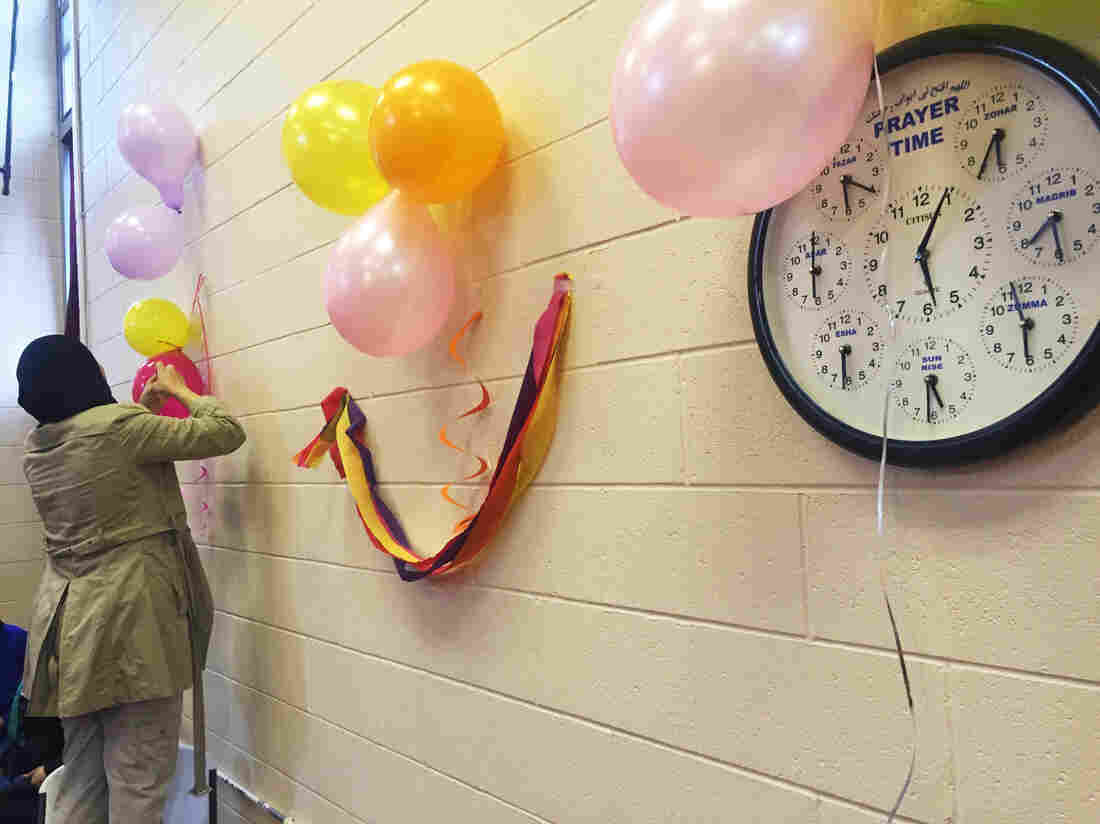 A volunteer at the the Dar-ul-Islam mosque in Elizabeth, N.J., prepares for a party to welcome refugees. More than 50 newly arrived Syrian women and children were invited to the party. Deborah Amos/NPR hide caption 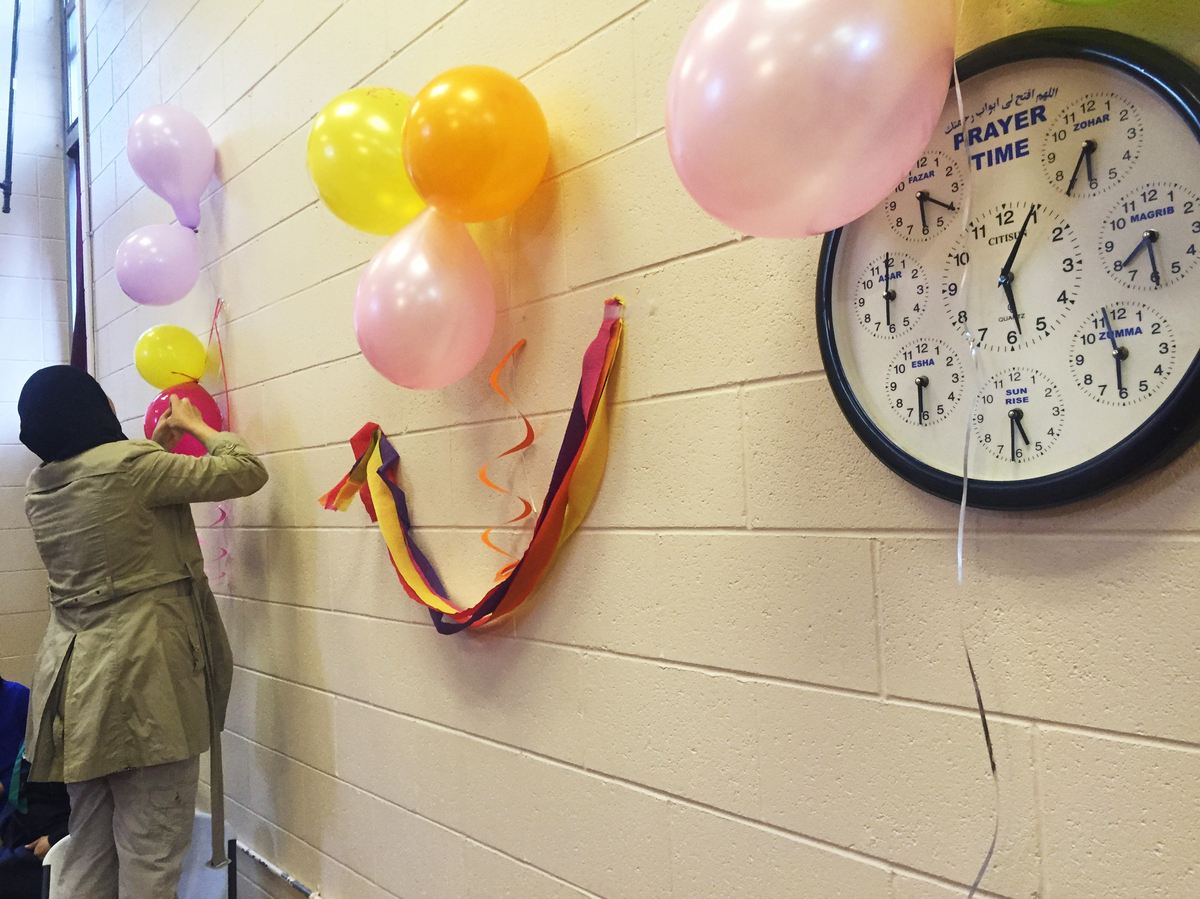 A volunteer at the the Dar-ul-Islam mosque in Elizabeth, N.J., prepares for a party to welcome refugees. More than 50 newly arrived Syrian women and children were invited to the party.

For Alissa Berger and her family, it was the first visit to the Dar-ul-Islam mosque in Elizabeth, N.J.

"We are from Temple Emanu-El," says Jenny Tananbaum, who came with the Bergers and refers to the nearby Jewish synagogue.

"We are here to adopt a Syrian family," says Berger. "We are going to work with a family for a year to help them." This is not a handout, she says, but practical help to upgrade inadequate housing, make sure the utilities work and help with employment and navigating American culture.

She's moved by the plight of middle-class Syrian families who lost everything in a brutal war and feels it's similar to her own family history.

"As Jews, our great-grandparents came here to start a new life," she says. "This was us, you have to remember that. It touched our hearts. Their families are like us, getting displaced. How can we not help?"

Tananbaum says her grandmother walked across Poland to escape persecution, got to Canada and eventually entered the U.S. illegally. "I get it," she says, explaining why she wants to help Syrian Muslim refugees.

The visitors take off their shoes inside the mosque and join an unusual grass-roots coalition of volunteers that includes Girl Scouts, a former refugee from Lebanon and Pakistani-born immigrant schoolteachers.

More than 8,000 Syrians have arrived in the U.S. this year, as this country accelerates a program to meet an administration goal of resettling 10,000 Syrians by the end of the government's fiscal year in October.

More than 200 Syrian refugees have been resettled in New Jersey in the past few months. That has strained official resettlement agencies, especially after New Jersey Gov. Chris Christie notified the State Department that he would no longer support any refugee resettlement.

"We are not happy about that," says Berger. "It's not fair. We would like to help these people."

On a Saturday afternoon, more than 50 Syrian refugees — women and children resettled in Elizabeth — have been invited to the mosque for a party. There is a snack table, balloons and gifts for the children.

Nargis Choudhry and Saman Khan, Pakistan-born immigrants who are now teachers in New Jersey, organized the gift-giving by pairing American children at a nearby Islamic school to choose the presents for the Syrian kids. The gifts are mostly big watches, which are popular with American girls, and bows and arrows for the boys from a popular American movie.

Khan and Choudhry acknowledge that these gifts may be unfamiliar to Syrian children recently arrived from refugee camps in the Middle East.

"They will be surprised because a lot of these things will be new for them," says Khan. "But you know what, they are going to have to live in America and they need to know what American kids like."

That's the biggest challenge for the newly arrived. The Syrians must learn English and the details of a new culture at the same time. The children get special English instruction in school. The mothers need extra help.

So Leila Esposito, a 16-year-old Girl Scout, has stepped in.

She has organized a babysitting service for the mothers who come to the mosque for English instruction. Her work is for the Girl Scout Gold Award, the highest achievement in scouting that encourages girls to "change the world" through community projects.

Her friend, Shaden Awad, also working for the gold, organized a tutoring program in math and English for the kids.

"They missed, like, four years of schooling," she says, "so we are just helping them catch up and welcoming them to America."

Their Scout leader, Wafa Chabbani Esposito, Leila's mom, says she's here because she understands the pain of leaving everything behind. "They've been through hell. I have been through war and I was a refugee and I know what it means."

She shepherds the Jewish group to make them feel welcome in their first visit to a mosque.

"'Salaam,' it's like 'Shalom,' " she says, citing the Arabic and Hebrew words for peace.

Esposito introduces the Berger family and Jenny Tananbaum to Wael Haloud and her children. Haloud, a Syrian mother of three, quietly takes in the Americans who are offering her a lifeline.

When the introductions are done, Tananbaum says, "Tell her from us, we are all people, we are all humans, we just want to help and be friends."