Accessibility links
The Fine Line Between Countering Security Threats And Racial Profiling : Parallels A U.S. nuclear engineer is accused of spying for China. Chinese economic espionage costs the U.S. billions each year. The case raises questions about whether Chinese-Americans are unfairly targeted. 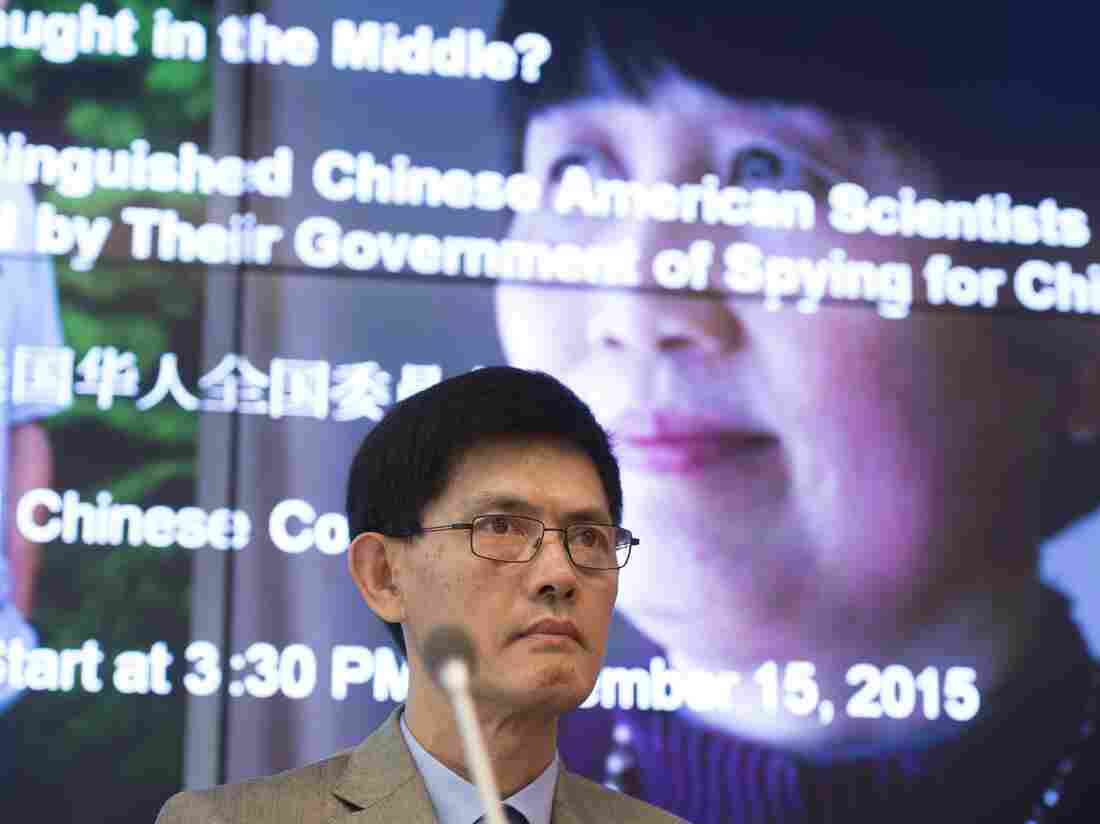 Xiaoxing Xi, a Temple University physics professor, speaks in front of a photo of Sherry Chen, a federal government worker, at a September 2015 Washington, D.C., press conference about the spying charges against them that were dropped. Xi says his wife and daughters were marched out of their bedrooms at gunpoint when he was arrested in May 2015. Saul Loeb/AFP/Getty Images hide caption 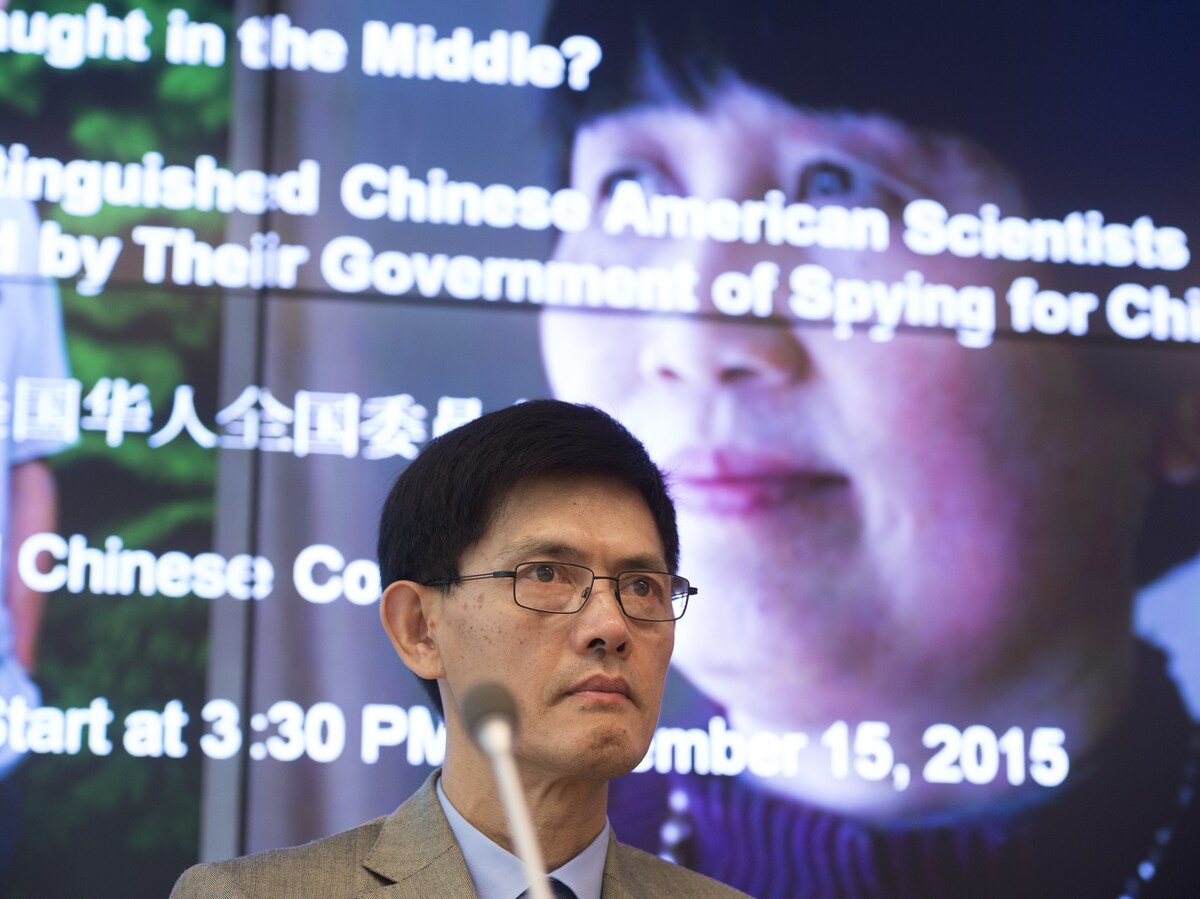 Xiaoxing Xi, a Temple University physics professor, speaks in front of a photo of Sherry Chen, a federal government worker, at a September 2015 Washington, D.C., press conference about the spying charges against them that were dropped. Xi says his wife and daughters were marched out of their bedrooms at gunpoint when he was arrested in May 2015.

In a courtroom in Knoxville, Tenn., the latest legal twist is unfolding in a case involving China — and alleged nuclear espionage.

Szuhsiung "Allen" Ho has been jailed since April. He's a nuclear engineer and consultant, born in Taiwan and educated in the U.S.

Ho's case is one of a number involving scientists the U.S. government suspects may also be spies. The scientists in question are all American citizens; they were all born in mainland China or Taiwan.

That set of facts has raised questions about whether the Justice Department is targeting people because of their ethnicity.

In Ho's case, he came to the U.S. in 1973 to attend the University of California, Berkeley. This past April, he was charged with violating the Atomic Energy Act — specifically, by using U.S.-based nuclear experts to help China's largest nuclear power company develop and produce "special nuclear material." If convicted, the charge carries a maximum sentence of life in prison and a $250,000 fine.

Ho is also accused of conspiring to act as an agent of a foreign government. The government alleges that his actions put U.S. national security at risk.

The case is scheduled to go to trial Jan. 24, 2017. In court Tuesday, Ho's lawyer, Peter Zeidenberg of the law firm Arent Fox, argued that Ho should in the meantime be freed on bail.

The judge ordered government prosecutors to identify by Friday any cases in which Chinese-Americans were released on bail and then fled the country, Zeidenberg says.

Zeidenberg declined to discuss other details of Ho's case, because the litigation is ongoing. But in an interview with NPR, he argues that broadly speaking, it fits a pattern of racial discrimination.

Zeidenberg has defended several Asian-American scientists facing espionage-related charges, and he says his clients have been targeted because of their ties to China.

A former federal prosecutor, Zeidenberg adds that he understands the challenge presented by Chinese economic espionage. But he believes his former colleagues are overreacting. "They have been way too quick to pull the trigger on these cases and others," he says. "They see conspiracies and patterns and malevolent conduct, when there isn't any."

The Justice Department and FBI deny this, and point to the many successful prosecutions of scientists. They say they will go after anyone who breaks the law — including one of their own.

Just this month, Kun Shan "Joey" Chun pleaded guilty to espionage-related charges brought by federal prosecutors. Chun, a naturalized U.S. citizen born in China, worked for the FBI until his arrest on March 16. An electronics technician, he held a top secret security clearance and had access to classified information. In a statement, the Justice Department said Chun "violated our nation's trust by exploiting his official U.S. government position to provide restricted and sensitive FBI information to the Chinese government." Chun has yet to be sentenced.

The FBI declined NPR's request for an interview. But asked to respond to allegations that in their zeal to uncover Chinese spies, investigators are unfairly targeting Chinese-Americans, the FBI provided this statement:

"While we cannot comment on specific cases, the FBI follows the facts wherever they lead. Consistent with Department of Justice guidance on the use of race in law enforcement activities, we investigate individuals based on known or suspected criminal activities or threats to national security. It is our duty to safeguard the civil rights and liberties of all Americans. The FBI does not initiate investigations based on an individual's race, ethnicity, national origin or religion."

What is not in dispute is that nuclear and economic espionage by China costs the U.S. economy billions of dollars each year. Nor is there any doubt that China is interested in intellectual property and classified data that belong to the U.S. government or to American companies. The FBI's task is to counter data theft — and a key plank of the FBI strategy to do that has become aggressive investigations.

Xiaoxing Xi became the target of such an investigation last year. Xi was born in China and came to the United States in 1989, eventually becoming a naturalized U.S. citizen. A physics professor at Temple University, he told NPR that he was at home in Philadelphia on May 21, 2015, when he heard a knock at the front door.

"So I run to the door to open it and saw a lot of people outside," Xi says. "Some were armed. And some had a battering ram, ready to take down the door. An FBI agent showed his badge and asked me, 'Are you Xiaoxing Xi?' I said yes, and then he announced that I was arrested. Another agent just put the handcuffs on me."

Xi says his wife and daughters — one of whom was 12 years old at the time — were at home and witnessed the scene. They were marched out of their bedrooms at gunpoint, Xi says, while he was taken away for questions and fingerprinting.

Xi was charged with four counts of wire fraud. A widely respected expert in superconductor technology, he was accused of trying to help "Chinese entities in becoming world leaders of the superconductivity field," a field with military applications. The Justice Department also alleged that Xi, in exchange for his efforts, "repeatedly sought lucrative and prestigious appointments in China."

The charges were eventually dropped against Xi, who denies that he ever sought to enrich himself through improper means or that he ever spied for China.

"No, never," he told NPR. "Of course I collaborate with people in China, but that's what the government and the universities encourage us to do — academic collaboration, in particular in today's global environment for scientific research."

"I wish they [would] catch more people who are actually doing the spying," Xi adds. "But cases like mine — they undermine people's confidence in America's legal system. These kind of cases literally terrorize the Asian-American community, and scientific community."

Xi's case carries echoes of the accusations against Wen Ho Lee, a Taiwanese-born scientist at Los Alamos National Laboratory. Lee was indicted back in 1999 for stealing nuclear weapons designs and sharing them with China. He spent nine months in solitary confinement.

All charges against Lee were later dropped, except one — improper handling of restricted data. Some details in the case remain murky to this day, but the presiding judge eventually apologized to Lee for his harsh treatment — and Lee was awarded a $1.6 million settlement.