Accessibility links
Aid Workers Provide Harrowing Accounts Of Being Attacked In South Sudan : Parallels Victims of the July 11 attack are coming forward with details. They say the international community is not doing enough to hold South Sudan to account. 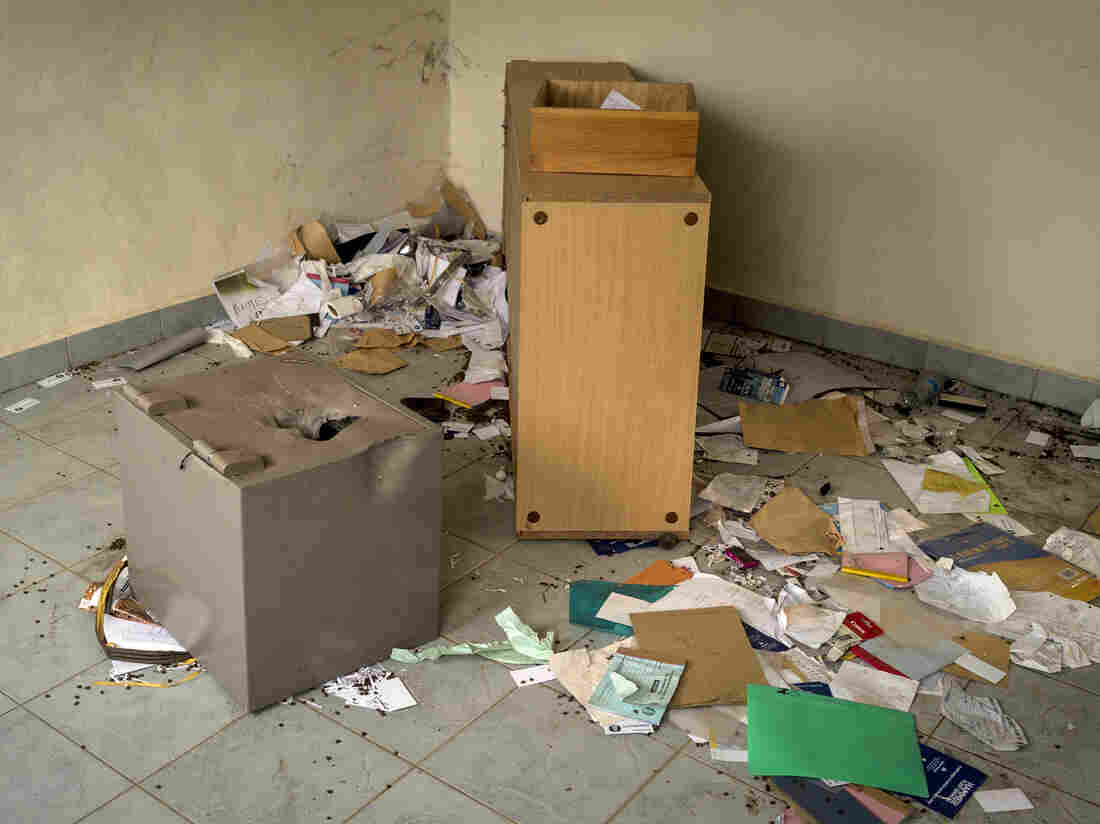 In this Aug. 3 photo, a safe that was shot open is seen in an office of Juba's Terrain compound after it was looted July 11. South Sudanese soldiers killed a local journalist and raped foreign aid workers in a five-hour attack that day. Adriane Ohanesian via AP hide caption 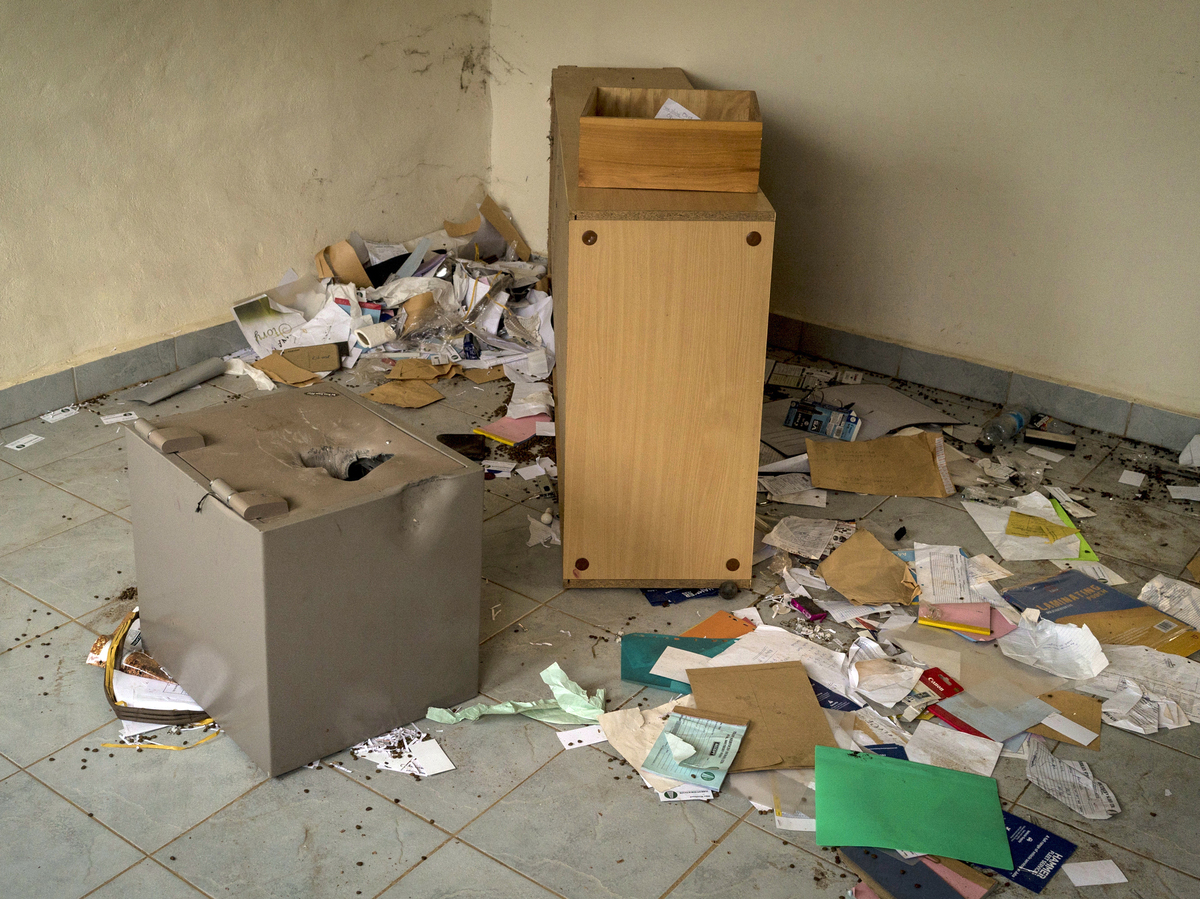 In this Aug. 3 photo, a safe that was shot open is seen in an office of Juba's Terrain compound after it was looted July 11. South Sudanese soldiers killed a local journalist and raped foreign aid workers in a five-hour attack that day.

In a report on Monday, Human Rights Watch described a harrowing series of events that took place less than a mile from a U.N. base in South Sudan's capital, Juba. On July 11, the report said, dozens of men in government uniforms "ransacked and looted" a hotel compound, first killing a South Sudanese journalist and then assaulting and raping aid workers staying there.

Among them was Jesse Bunch, a private contractor, who was hiding in a room with several other Westerners and was shot through a door in the leg.

"They broke down the door, they came in, they began to threaten women, they separated us into groups, they took us outside," he told NPR. "We saw where they shot the local journalist and then they began to separate women into the various rooms."

Western Aid Workers Among Those Attacked By Soldiers In South Sudan

"I said, 'Look, these women are here to help you, don't hurt them.' But they continued to take them out and I heard crying in the other rooms."

Jehanne Henry, with Human Rights Watch, has spoken with several of those women, who did not want to be identified. One told her she was raped by at least 15 men.

Another woman who does not want to be identified tells NPR she and other Western aid workers thought they'd be safe in the compound. It took awhile, she says, before the soldiers found her and about 12 other women hiding in a bathroom. When they did, one took her to another room.

"There was blood on the floor and there were panties on the floor, so I knew what he was going to do and I assumed the worst — especially having seen the blood," she says.

She curled up on the floor and locked her legs.

A soldier "kept hitting me with an AK-47 over and over again, and he kept screaming at me to open my legs, open my legs," she says. "'I'm going to kill you if you don't open your legs.' And that went on for quite some time."

Another man walked in the room, screaming at her, too.

"That soldier took his gun and pointed it at my left temple and then shot it into the floor, right next to my left temple," she says. "It was just so loud and I couldn't hear and I think I kind of lost my wits at that point."

Finally, a South Sudanese soldier entered to say she was rescued. She suspects he had been waiting outside the whole time.

Henry from Human Rights Watch says the entire ordeal lasted about five hours and some victims were stranded at the hotel all night, despite their appeals for help from the nearby U.N. base.

Some of them were on the phone with the U.N. and had texted diplomatic contacts in Juba as the attack was starting. They received assurances of help.

"But it seems the rescue missions ended up being South Sudanese security, in some cases, or a private security company in other cases," Henry says.

The U.S. is also calling for accountability.

"Throughout this three-year conflict, the government of South Sudan has routinely allowed impunity for murder and sexual violence. This must end," U.N. Ambassador Samantha Power said in a statement. "South Sudan's leaders must investigate this incident and hold accountable the individuals responsible for these cowardly and brutal assaults."

The trouble, says Henry, is this wasn't an isolated incident.

"Many Southern Sudanese women who were sheltering at that U.N. base were also snatched and raped by soldiers along that road," she says. "So it wasn't only this compound and the international women. It was many, many more South Sudanese."

South Sudan's government has been put on notice repeatedly, Henry says, but the violence persists. She says both sides are committing atrocities and acting with impunity in a conflict that started as a political squabble between the country's president and former vice president.

Meanwhile, the Western woman who told her story to NPR doesn't have much faith in another U.N. investigation or report. Though she says she wasn't raped during her ordeal, "Rape is part of the military arsenal that the South Sudanese government employs on a daily basis. Why, after two years of documenting these kind of incidents, would we be surprised that they would do it to Americans, to Westerners, to aid workers?" she says.

She says it is time for the U.S. government to rethink its approach to South Sudan — and at least push harder for an international arms embargo on a country. The U.S. played a central role in helping the country gain independence in 2011 after decades of war with Sudan.