Accessibility links
In A Tiny German Town, Residents And Refugees Adapt : Parallels Klosterheide, population 280, is hosting 60 refugees. Some locals are wary. "Those who don't try have no chance to correct their bad prejudices," says a local official who coordinates refugee housing. 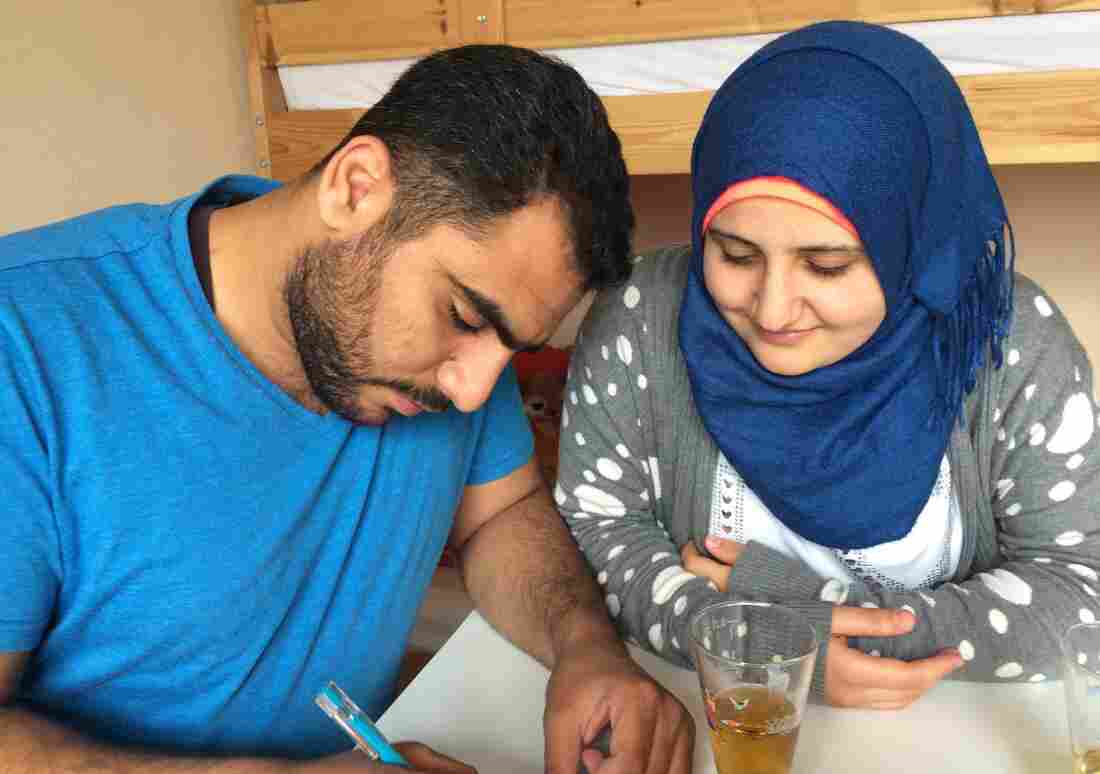 Firas Awad (left) and wife Tamam Aldrawsha, from Syria, spend hours studying German every day. Awad wants to complete the pharmacy studies he abandoned because of the Syrian war, and Aldrawsha wants to become a nurse. "I want to be useful," she says. "Useful for my family and useful for this country." Joanna Kakissis for NPR hide caption 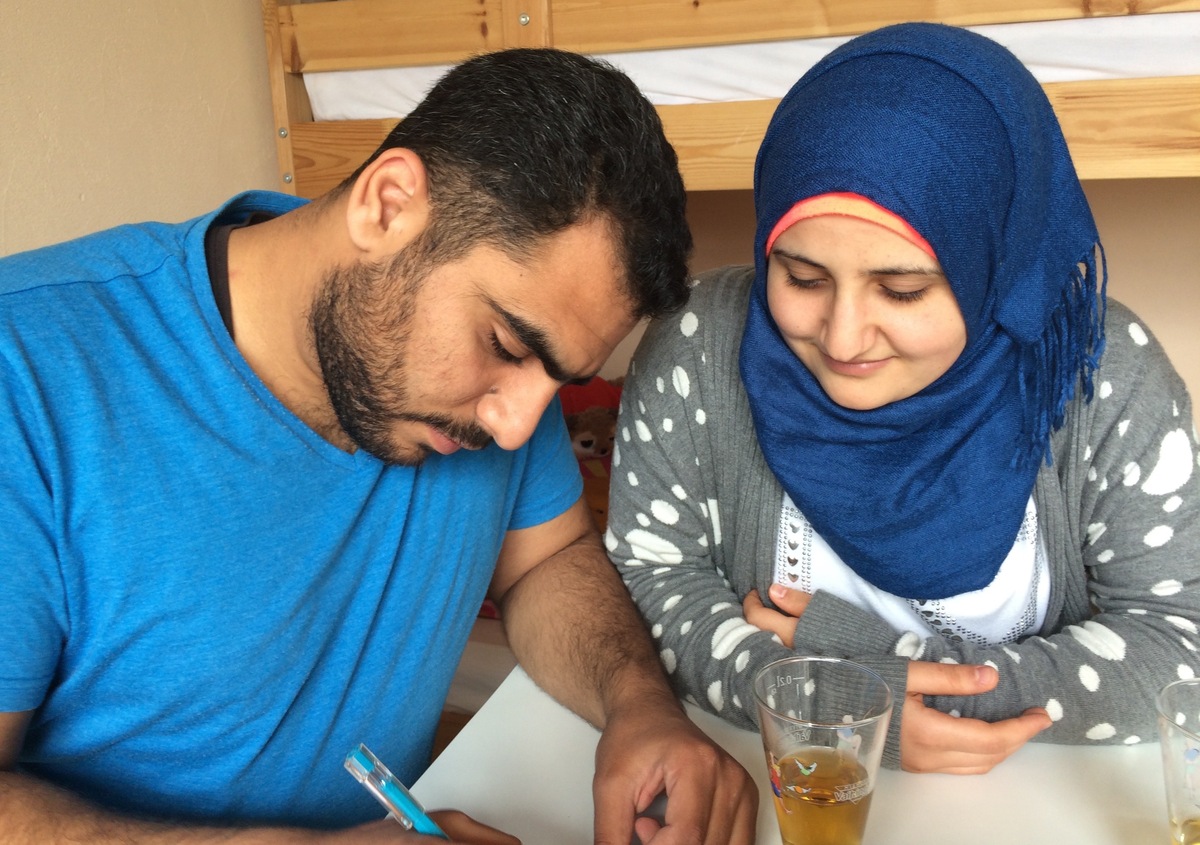 Firas Awad (left) and wife Tamam Aldrawsha, from Syria, spend hours studying German every day. Awad wants to complete the pharmacy studies he abandoned because of the Syrian war, and Aldrawsha wants to become a nurse. "I want to be useful," she says. "Useful for my family and useful for this country."

Like hundreds of thousands of Syrians fleeing the long war back home, 25-year-old Firas Awad endured a dangerous sea journey and a long trek through much of Europe to reach Germany, where he's staked his future.

He and his 18-year-old wife, Tamam Aldrawsha, who are both from the city of Homs, now live in what used to be a country inn and restaurant, in a tiny, forested village north of Berlin called Klosterheide, population 280.

Eighty-eight asylum seekers moved here last December. Fewer than 60 remain, most of them men in their 20s and 30s. They spend nearly six hours a day studying German in the hopes that they can someday work in professional fields such as medicine and pharmaceuticals or learn crafts like carpentry and auto repair.

Awad hopes that in three years, maximum, he will speak German well enough to finish his pharmacy studies and get a job. Then, just maybe, he says, the people who sometimes glare at him on the bus will accept him.

"The other people have to respect me because I'll be working here, I will support this country like German people," he says.

We walk to his room, which he calls "mein kleines Haus" or "my little house." It's paid for by the district government of Ostprignitz-Ruppin, which leases the inn.

Aldrawsha, his wife, is inside, studying German verbs. She wants to be a nurse. She shows me a wall above their small refrigerator that's covered with yellow Post-it notes with German words and phrases. One reads "Wir moechten gesellshaf reinkommen" — an attempt in German to say, "We want to be part of society."

Germany welcomed more than a million migrants last year, many of them war refugees from the Middle East. But Germans are growing increasingly pessimistic that these newcomers can be integrated into German society.

Their fears have been inflamed by the rise of a far-right Islamophobic party, the Alternative for Germany (AfD), which says migrants are criminals and that Islam is not compatible with the German constitution. A series of attacks last month, including two by asylum seekers, have also unnerved Germans, though polls show most don't see a connection between the attacks and refugees.

Chancellor Angela Merkel, who has seen her popularity wane because of her open-door policy for refugees, says Germany faces a historic task of integrating these largely Muslim newcomers.

"I am as convinced as ever that we can do it," she said last month.

But the task of actually convincing Germans that this can be done usually falls on the shoulders of local officials like Martin Osinski, who coordinates refugee housing in the area that includes Klosterheide, which is part of a nearby town, Lindow.

Whenever he plans the opening of a refugee shelter, he has a meeting with locals and spends hours answering their questions.

"And we always explained, there will be no rise of criminalism," he says. "There will be no problems for the neighbors, except some more children crying around. And we invited people to have a look at our camps and to meet refugees and just to make [their] own experiences. This helps to get rid of anxiousness. As long as people made contact, it worked, it was OK. But those who don't try have no chance to correct their bad prejudices. No chance."

Ingrid Huebner, a 65-year-old retired job counselor, and her 75-year-old husband, Wolfram, who used to work at a power plant, were among several Klosterheide residents who took Osinski up on his offer. 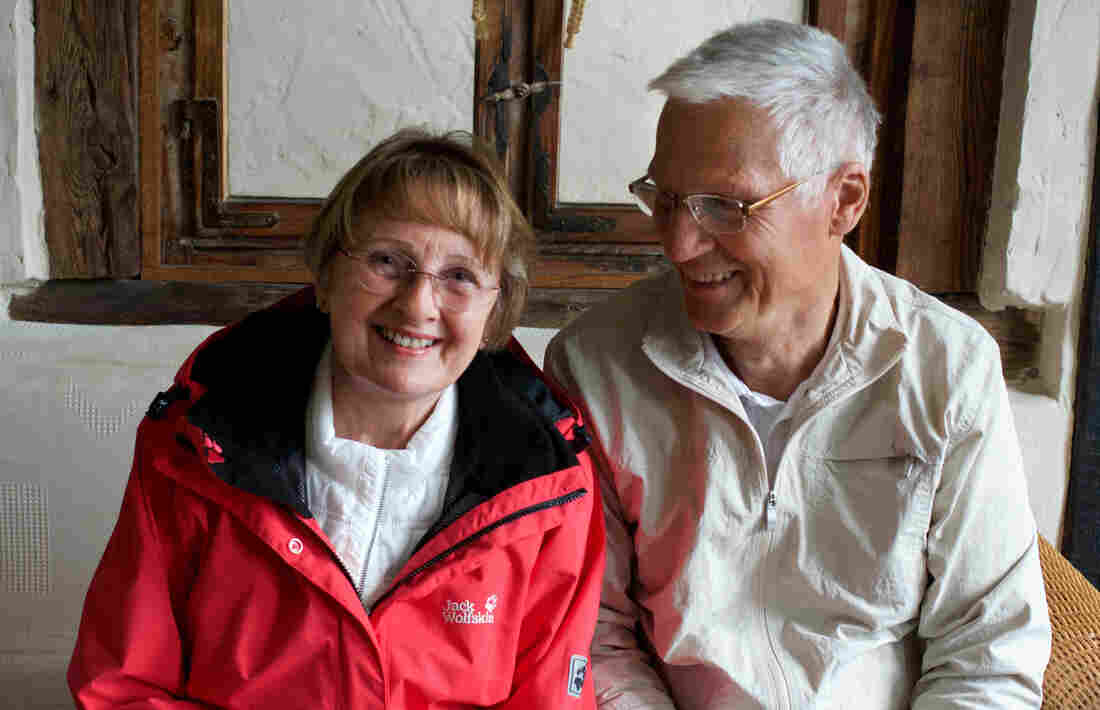 Retirees Ingrid and Wolfram Huebner spend at least one day a week at the shelter. They've befriended a Syrian-Kurdish family there. Joanna Kakissis for NPR hide caption

They say locals and the newcomers have picnicked together and worked on village beautification projects. The Huebners have befriended a Syrian-Kurdish family, whom they see at least once a week.

"We take them on excursions that we haven't gone on for years," Ingrid says. "Meeting them has really enriched our lives."

But other villagers have stayed away and remain wary. The refugee shelter's deputy manager, Angela Lipowski-Wallin, recalls how a rumor spread after the migrants took swimming lessons at the public pool.

"The refugees weren't staying in their lanes, so the locals here thought they weren't following the rules," she says. "That quickly morphed into rumors that the refugees were harassing other swimmers."

As Sweden Absorbs Refugees, Some Warn The Welcome Won't Last

Around the corner from the shelter, Daniel Schultz, a short, stout 29-year-old former soldier, is replacing the bricks of his parents' big driveway.

He says he sometimes sees the migrants from the local shelter riding their bicycles around town, sometimes swerving into traffic.

"They're all really nice, and I've been to some bad parts of Afghanistan, so I know the terrible situation some of them are coming from," he says, wiping his brow. "I'm not afraid of them. But there is fear among some that we can't predict who will become a terrorist and who will not."

Down the street, a splinter-thin, middle-aged carpenter named Michael Ast is taking a break, eating plums picked right off his tree.

He says the migrants are kind and hardworking, but doubts many will end up with real jobs. There's too much to learn, he says, and it's not just the language. He tells the story of a young asylum-seeker from Chad that he hired as an apprentice.

"He was friendly, eager to help and had a good work ethic. He was always on time," Ast says. "But when we tried to teach him, it didn't work out. We spent half a year trying to teach him what a cubic meter and a square meter were. He didn't even know that."

The young man gave up and left town. Ast shakes his head.

"We were worlds apart," he says.