Accessibility links
Ahead Of Major Protest, Venezuela Kicked Me (And Other Journalists) Out : Parallels Opposition leaders hope to put a million people in the streets in a show of rejection of the government. Foreign reporters hoping to cover the demonstration were turned away at the airport.

Ahead Of Major Protest, Venezuela Kicked Me (And Other Journalists) Out

Ahead Of Major Protest, Venezuela Kicked Me (And Other Journalists) Out 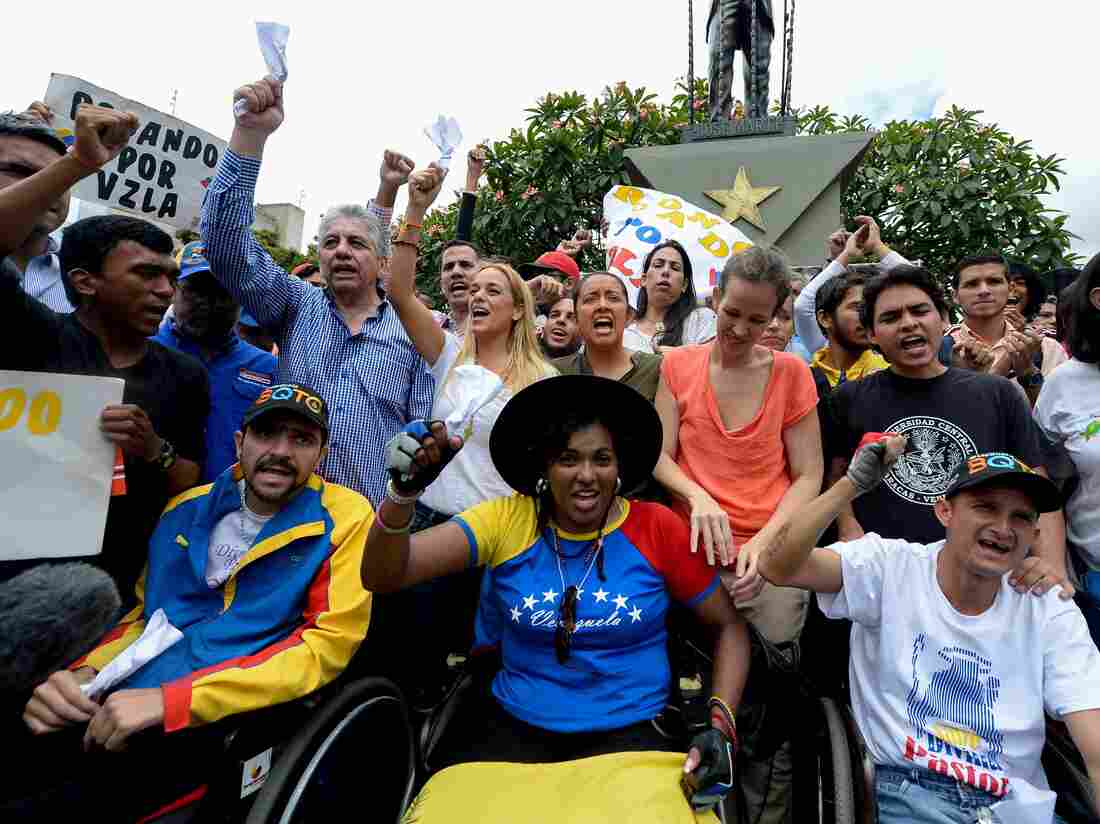 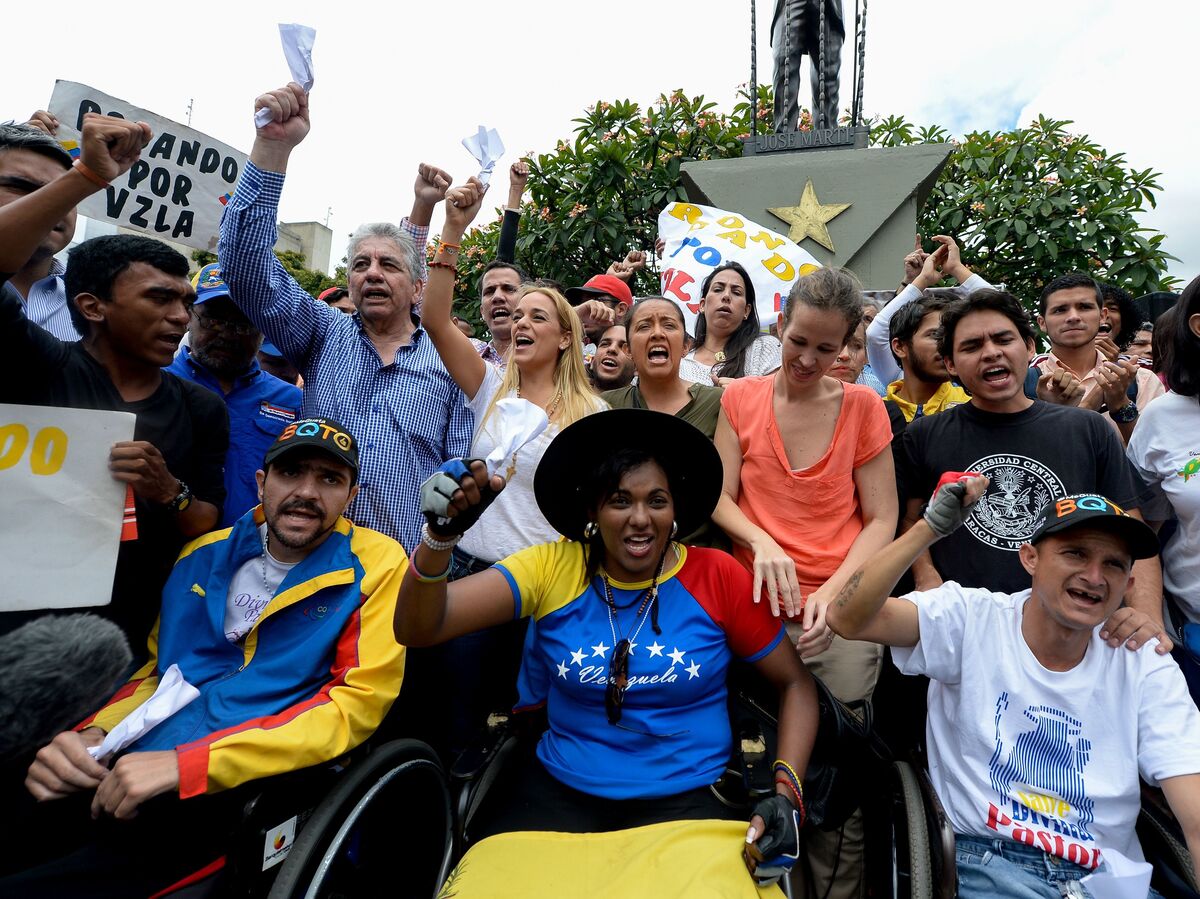 Lilian Tintori, second row center, in white top, the wife of jailed opposition leader Leopoldo Lopez, takes part in a demonstration in Caracas on Aug. 31. Venezuelan President Nicolas Maduro vowed Tuesday to jail opposition leaders if they incite violence during upcoming protests seeking a referendum on removing him from power.

Editor's note: Reporter John Otis first covered Venezuela 19 years ago and has returned many times since. On Wednesday, the day before a planned opposition demonstration, he and other foreign journalists were barred from entering the country. He filed this report while awaiting a flight out.

As a foreign correspondent based in Colombia, I've made dozens of reporting trips to Venezuela — but today's has been the shortest by far. As soon as I stepped off the plane at the Caracas airport, immigration officials confiscated my passport, then ordered me to take the next flight back to Bogotá.

I'm not alone: Alongside me as we wait to board the plane are Marie-Eve Detoeuf of the French daily Le Monde, and Cesar Moreno, a reporter for Colombia's Radio Caracol. A few days ago an Al-Jazeera TV crew was turned back at the airport. 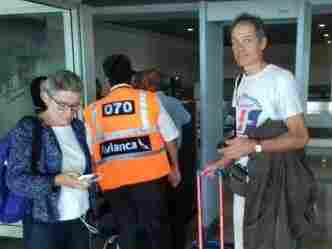 Reporter John Otis (right), who has been traveling to Venezuela for 19 years, was turned back when he landed at the airport in the capital Caracas on Wednesday. Otis and other journalists were put on planes heading out of the country in advance of a protest rally on Thursday organized by opponents of President Nicolas Maduro. Courtesy of John Otis hide caption

We all had been trying to get into Venezuela to cover a major demonstration planned for Thursday. Opposition leaders hope to put a million people in the streets in a show of rejection for the beleaguered socialist government of President Nicolas Maduro, which is dealing with a collapsing economy, the world's highest inflation rate and a plunging approval rating.

But much more is at stake on Thursday — which may help explain the crackdown on foreign reporters.

One aim of the march is to pressure authorities to hold a recall election this year. Should Maduro lose, new elections would be held — and the opposition would stand a good chance of returning to power for the first time since the late Hugo Chavez ushered in Venezuela's socialist revolution in 1999.

Critics claim the government is stalling for time. The country's electoral council, which nearly always sides with the executive branch, says there may not be enough time to gather signatures and organize the voting process to hold the recall this year, and that the vote very likely will have to be held in 2017.

Should that happen, and Maduro loses, his vice president would take over — keeping the ruling socialists in power until at least 2019.

Apparently the government thinks it can control or tamp down news coverage of Thursday's protest by keeping out foreign reporters. But international news organizations like CNN, AP, Reuters and Bloomberg News all have permanent correspondents here, so it's not like proceedings will go unnoticed.

What's more, sending us packing only reinforces the government's heavy-handed reputation with the press. I had to sign an official letter declaring myself an "inadmissible person" and add my two thumbprints to the document.

In recent years the Chavez and Maduro governments have pressured the news media in Venezuela by passing a restrictive communications law, fining news outlets for coverage that reflects badly on the government and refusing to renew the transmission licenses of critical TV and radio stations.

There's even a major shortage of newsprint that has forced Venezuelan newspapers to reduce their pages or stop printing altogether. (I have reported on all these issues for the Committee to Protect Journalists.)

In turning me back today, Venezuela's immigration officials pointed to norms in which foreign correspondents are supposed to apply for accreditation from the Communications Ministry before arrival. But in many cases, the ministry ignores our requests or we have to deploy on short notice, so we usually go in as tourists.

Ironically, while reporters are clamoring to get into Venezuela — the country with the largest oil reserves in the world — few other people seem to have the same urge. This morning, the immigration area of the airport was empty for long stretches of time. Officials had nothing to do but tell jokes and wander off for an early lunch.