Accessibility links
Authorization for Use of Military Force, AUMF, Cited When U.S. Military Strikes : Parallels After the Sept. 11 attacks, Congress authorized the president to act against those responsible. Presidents Bush and Obama have cited that measure ever since in pursuit of multiple groups. 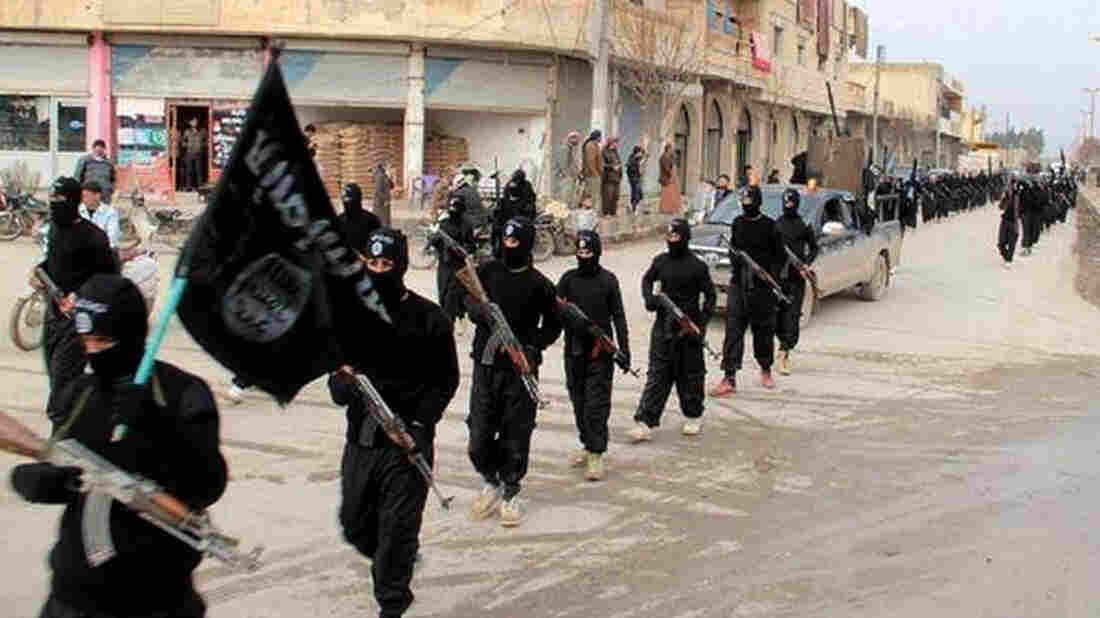 Islamic State fighters march in Raqqa, Syria, in an undated file photo released in 2014. The U.S. has been bombing ISIS in Syria and Iraq for the past two years. A U.S. Army captain has sued President Obama, arguing the U.S. war against the extremist group is not legal because the U.S. Congress has not authorized it. Uncredited/AP hide caption 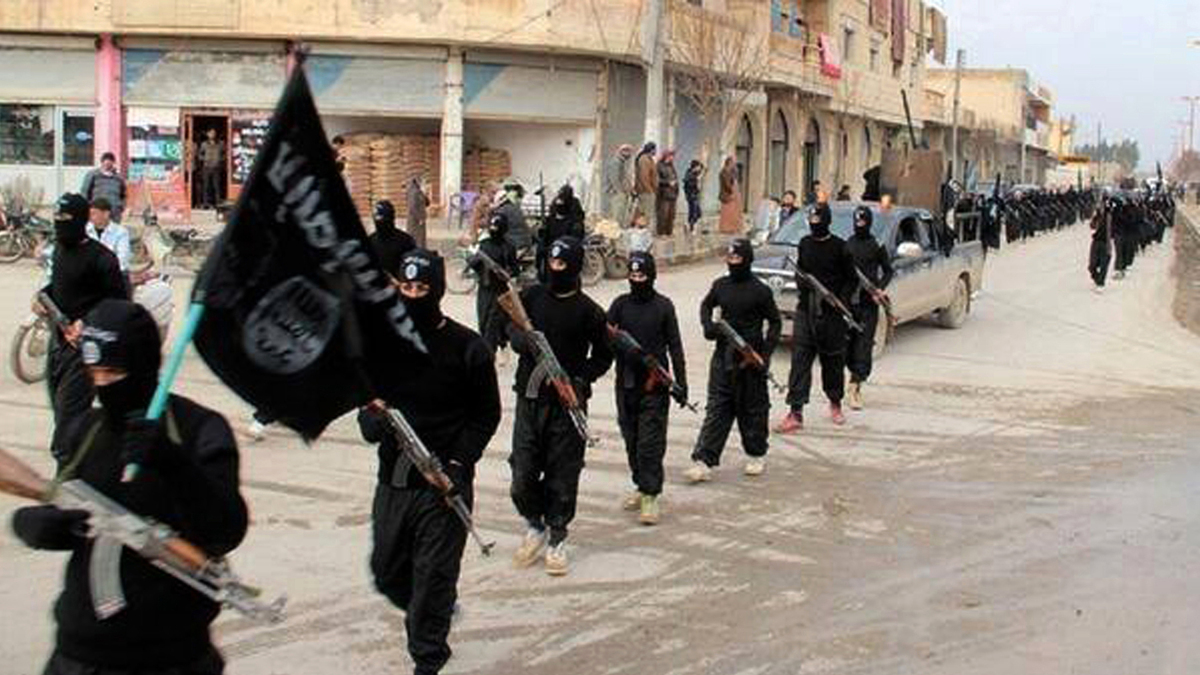 Islamic State fighters march in Raqqa, Syria, in an undated file photo released in 2014. The U.S. has been bombing ISIS in Syria and Iraq for the past two years. A U.S. Army captain has sued President Obama, arguing the U.S. war against the extremist group is not legal because the U.S. Congress has not authorized it.

The Pentagon press secretary, Peter Cook, walked into the Pentagon briefing room on the afternoon of Aug. 1 with an announcement: The U.S. had just launched airstrikes against Islamic State targets in Libya.

Reporters in the room jumped in with questions: Why now? What are the targets? What's the end goal? Finally, well into Cook's briefing, a reporter raised her hand and asked, under what legal authority were the strikes being conducted?

"Under the 2001 Authorization for the Military Force," Cook replied. "Similar to our previous airstrikes in Libya."

The press conference moved quickly on. But take a minute to wrap your head around Cook's words.

Congress passed the 2001 Authorization for Use of Military Force (AUMF) in the frantic days after the Sept. 11 attacks. It cleared both the House and the Senate with overwhelming majorities — just one "No" vote between both chambers. The AUMF was designed to give President Bush the power to use force, to defend the U.S. against future attacks. It runs just 60 words: 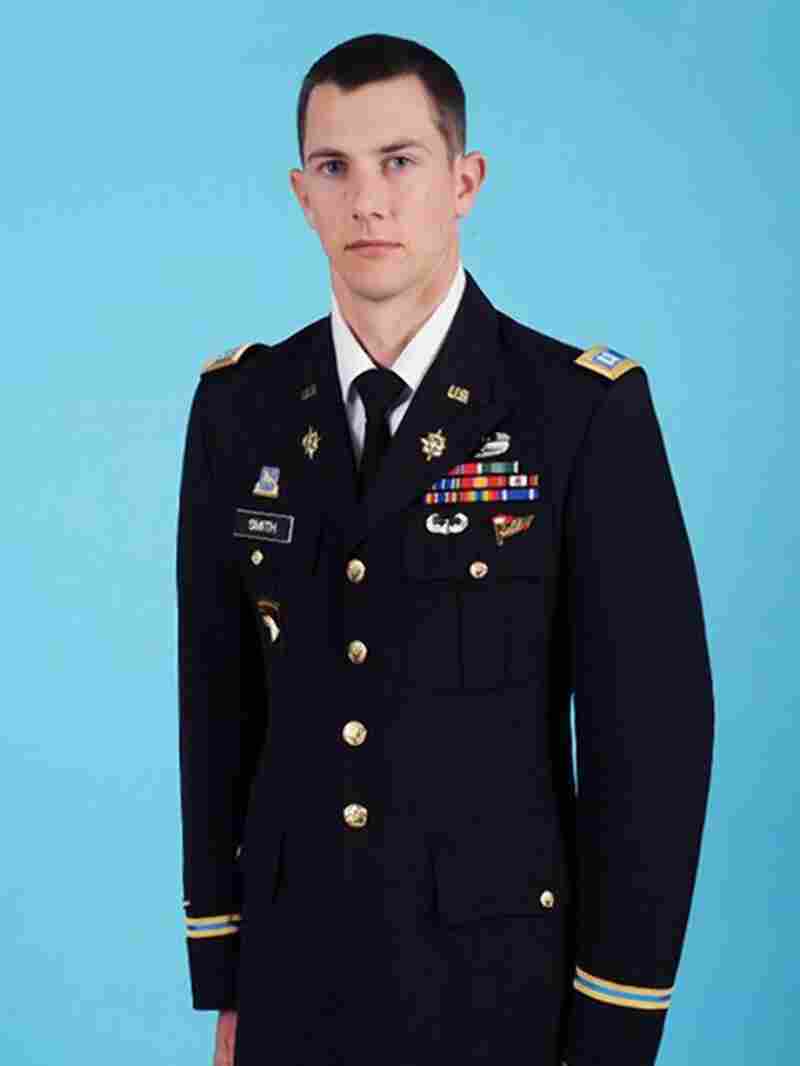 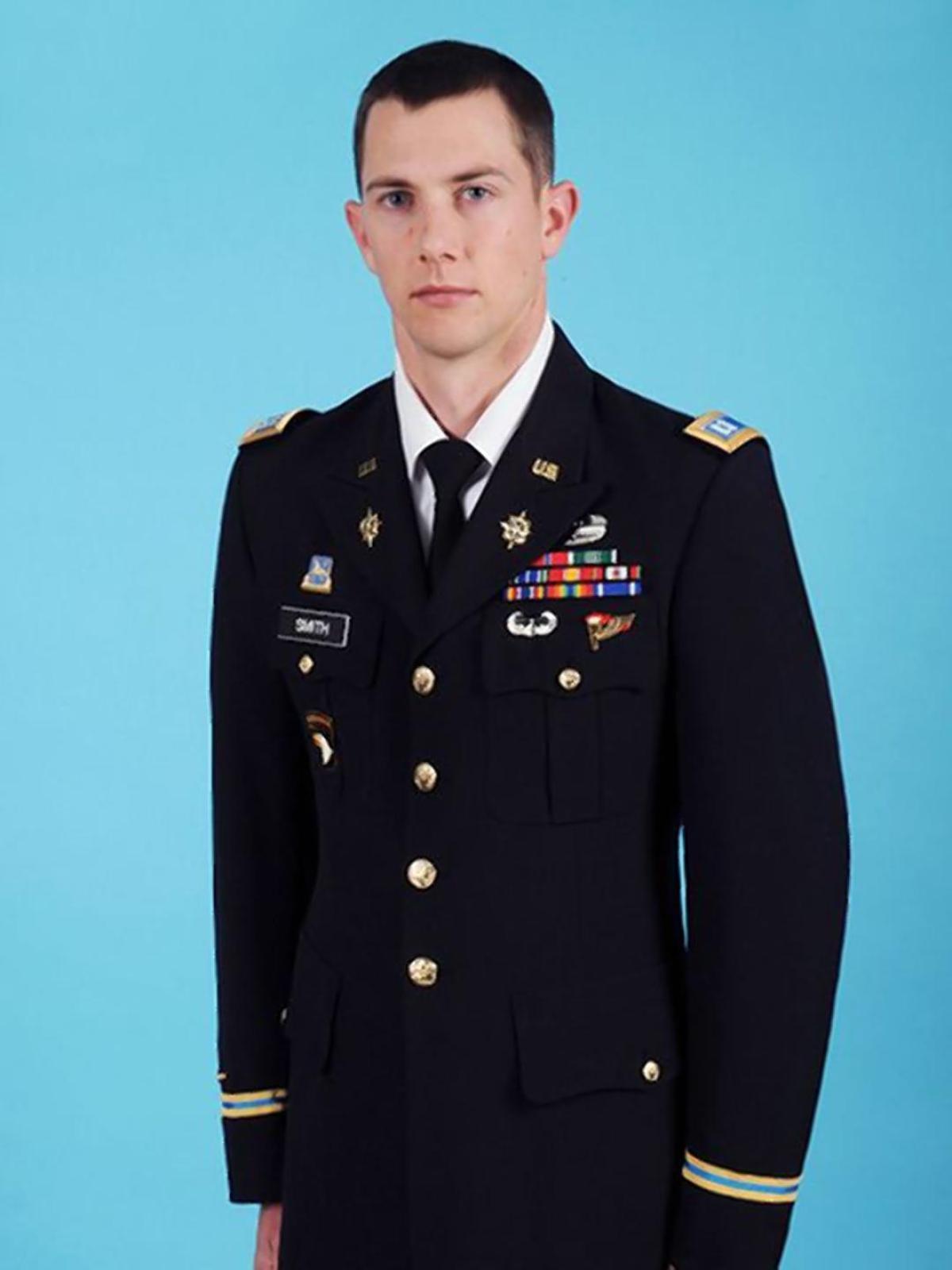 Army Capt. Nathan Smith is suing President Obama, claiming the fight against ISIS is illegal because Congress never authorized the war. The lawsuit raises questions about the legal authority Congress gave the president immediately after the Sept. 11 attacks.

In short, the 2001 authorization grants the president a congressional stamp-of-approval to use force against those responsible for the Sept. 11 attacks, and those who harbored them. In other words, against al-Qaida and the Taliban.

Today, a decade and a half later, the Obama administration argues that the authorization continues to apply to U.S. military actions in Afghanistan. Also, that it applies in Iraq, in Syria, and beyond — including the ongoing air campaign in Libya, against ISIS — a group that did not exist 15 years ago.

"Under domestic law, and international law, the United States is at war with al-Qaida, the Taliban, and their associated forces," said President Obama, in a 2013 speech at National Defense University that sought to explain the legal reasoning. "We are at war with an organization that right now would kill as many Americans as they could if we did not stop them first. So this is a just war — a war waged proportionally, in last resort, and in self-defense."

Describing ISIS as an "associated force" of al-Qaida and the Taliban is controversial. Many terrorism experts call it a stretch, when ISIS and al-Qaida are now actively fighting each other in Syria and elsewhere.

The White House did try to update the authorization, sending Congress proposed new wording last year. But the effort went nowhere in Congress. Both Republicans and Democrats hated it. Some called it too broad, others not broad enough. Plus, after the 2003 Iraq invasion, casting a vote on military force carries political risk.

A captain sues the president

This is where things have stood ever since. And this is the state of affairs that an Army intelligence officer, Capt. Nathan Smith, is seeking to challenge, in a lawsuit filed in U.S. District Court for the District of Columbia. The defendant in the suit? Smith's commander in chief, Barack Obama.

Here's the backdrop: Capt. Smith is active-duty. He was deployed to Kuwait, as an Army intelligence analyst supporting the campaign against ISIS.

"He argues that he has been given an illegal order, and directed to obey an illegal order by the president," says Michael Glennon, a professor of international law at the Fletcher School at Tufts University, and one of the lawyers supporting Smith in his suit. Glennon argues that Congress never signed off on war against ISIS, and that sending troops to war without such authorization violates the War Powers Resolution. That's a law that Glennon helped draft, as a Senate lawyer back in 1973.

Glennon believes Capt. Smith is trapped: either fighting a war he believes is illegal, or risking court martial if he disobeys orders.

"He is really confronted with a Catch-22," says Glennon. The solution, Glennon says, is for lawmakers to step up and own the fight against ISIS. "That's the purpose of this lawsuit. And that's the vision of the Constitution. To hold members accountable for the decision to go to war."

Jennifer Daskal agrees. She's a former Justice Department lawyer, now a professor at American University in Washington. In an interview, Daskal said the current situation sets a dangerous precedent, by writing future presidents a blank check for war. She also believes that it ignores the intentions of the Founding Fathers.

Some members of Congress are pushing to weigh in. Perhaps most prominent among them is Sen. Tim Kaine, the Virginia Democrat, who is now Hillary Clinton's running mate.

"The 2001 authorization passed in the days after 9/11 to enable us to go after the attack's perpetrators is badly in need of an update," said Kaine, in a Senate floor speech in 2014. Since then, he has repeatedly called on his fellow lawmakers to revisit the war authorization. It's a cause he could take to the White House, if a Clinton-Kaine ticket wins in November.

Meanwhile, here's another development to watch for this fall: a possible ruling in the lawsuit filed by Capt. Nathan Smith.

David Remes, an attorney representing Smith, told NPR that the government's latest brief to the court is due on Sept. 14. That's 15 years — to the day — since Congress passed the Authorization for Use of Military Force.