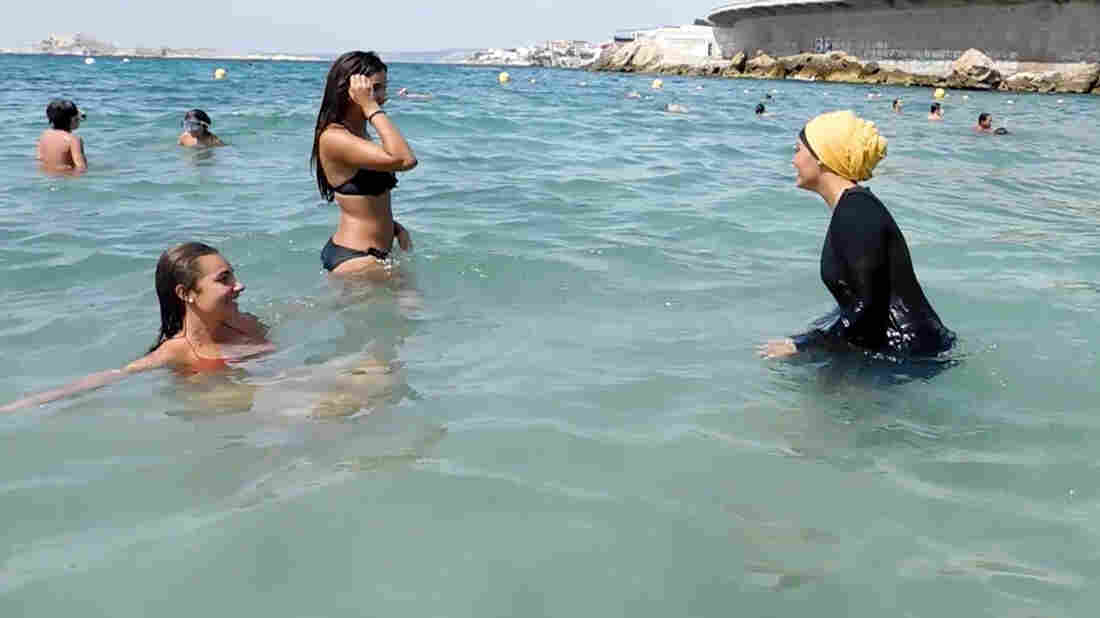 Nesrine Kenza (right) wears a burkini at the beach with two friends in Marseille, France, on Aug. 29. Courts have struck down bans on the burkini, but the debate has carried on and is now being raised by presidential candidates. AP hide caption 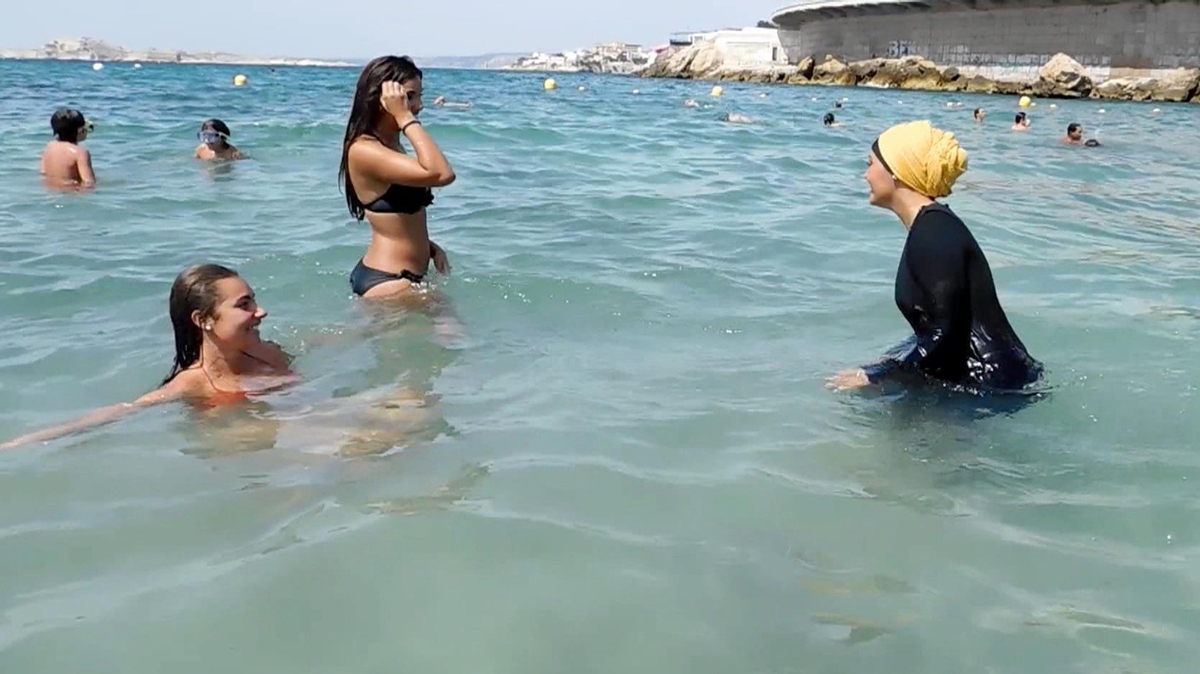 Nesrine Kenza (right) wears a burkini at the beach with two friends in Marseille, France, on Aug. 29. Courts have struck down bans on the burkini, but the debate has carried on and is now being raised by presidential candidates.

Summer may be over, but in France the uproar over beaches banning the body-covering Muslim bathing suit, known as the burkini, is not. In fact, the debate has morphed into an even bigger discussion about the place of Islam in this staunchly secular nation.

About 30 French towns tried to ban the burkini on their beaches this summer. One by one, French courts overturned many of the bans, calling them unconstitutional.

But that didn't stop the former French president, Nicolas Sarkozy, from throwing his full support behind them. Sarkozy, who is running for president again, is determined not to be outdone by the far right. He is making questions of "national identity" a big part of his campaign.

"We can't leave these mayors to deal with this problem alone," he said in a recent radio interview. "There needs to be a law to keep these Islamic bathing suits out of our swimming pools and off our beaches."

When the radio host pointed out that the bans were unconstitutional, Sarkozy retorted, "Then we'll change the constitution."

Many French people see the burkini as extremist clothing and a provocation after two attacks this summer by self-proclaimed Islamist radicals. One was in a Normandy church, the other on a crowded boulevard in the southern city of Nice.

Even if they don't see it as a threat, at the very least some French people see the burkini as repressive clothing that represents the subordination of women.

A recent poll showed that more than 60 percent of French people supported the burkini bans.

The Burkini: A Closer Look At The Swimwear That's Making Headlines

The face-covering burka was banned in France several years ago when French lawmakers ruled that people have an obligation to show their identity in public as a matter of security.

The Muslim veil is legal, except in public schools, where students are expected to appear equal and not show their religious affiliation in a secular school of the French republic.

Banning the headscarf in public universities was rejected recently by French lawmakers.

Historian Patrick Weil was part of the commission that recommended banning the Muslim veil in grade schools. He says the primary reason for doing so was to protect the girls themselves.

"We found many cases where girls were under pressure from boys at their school to cover themselves," he said.

Weil says a headscarf ban in schools protects minors and creates an environment where everyone is equal.

Weil is against banning the veil at the university level, where it would affect adults, and totally against the burkini bans.

But some are enlarging the burkini debate to talk about Muslim veils. Conservative lawmaker Eric Woerth recently suggested the veil be banned in public.

"France must have the courage to take a stand and protect its values," he said in a recent television interview.

Though there's no prospect that will happen, the mere suggestion of policing many thousands of veil-wearing French Muslims (France has the largest Muslim community in Europe) shows how the issue has taken hold of the nation.

And it's not coming only from the right.

Socialist Prime Minister Manuel Valls recently summed up French secular values and women's rights in one figure: Marianne, the oft-depicted bust of a revolutionary woman who is meant to represent the French Republic.

In a speech to fellow Socialists, Valls said a democratic and free society is judged on the place of women. And that equal rights has been the historic battle of the left.

"Marianne has a bare breast because she feeds the people," he said. "She is not veiled because she is free! That's the French Republic! That's Marianne!" Valls yelled to a cheering crowd. But television cameras zoomed in to show France's female education minister, Najat Valaud Belkacem, scowling in the front row.

Valls' remarks started a fury on social media, with one woman declaring: "We are not milk cows."

"My blood boiled when I heard those comments," says Mathilde Larrère. So the university history professor fired off a history lesson to Valls in a flurry of tweets.

Larrère says Marianne is an 18th century allegorical figure created at a time when women couldn't vote and had the legal status of minors. She says Valls' comments have turned many French feminists into burkini supporters.

"Granted, the burkini is not a neutral piece of clothing," says Larrère. "But it is out of the question to restrict what women wear and ban them from the public space."

Larrère says the 1905 law separating church and state has traditionally given space to all religions to practice.

"But the principal of secularism is now being used as a spear in xenophobic, Islamophobic and sexist battles," she says.

Muslim activist Yasser Louati couldn't agree more. He says the constant talk of secular values is a way to make some Muslims feel they're not full French citizens.

"What's happening today in France is we see politicians constantly using and playing the identity card for political gains."

With the goal of fostering better relations with France's large Muslim community, the French government recently created the Foundation for Islam. Then it appointed a non-Muslim veteran politician as its head. And a former defense minister, Jean Pierre Chevenement, recently ruffled feathers when he said Muslims should try to be more discreet.

"The organization is bound to fail," says Louati. "Nominating a white male with no connection to Muslims is a neo-colonial approach. That's how Algeria (a French protectorate for nearly 150 years) was maintained and controlled by France."

Even if there was no clear Muslim candidate for the post, Louati says officials should have consulted more closely with Muslims in filling it.

At one of Paris' many outdoor street markets, vendors shout out their prices and brag about the freshness of their products. Soraya Essid has been selling her fruits and vegetables at these markets for 20 years. The 50-year-old mother of two was born in Algeria but emigrated to France when she was young. Essid, who wears a veil, says things have become especially tense since January 2015 and the first major terrorist attack against the weekly satirical magazine Charlie Hebdo.

"People are on edge a bit, and they look at you now in the metro when you're wearing a veil," she says. But I don't pay any attention. I just carry on as I normally do."

Essid believes life will eventually go back to normal.

"It has to," she says. "We live here, our children are growing up here and our future is here, in France."