Accessibility links
Drone Strikes Rise After 9/11, And Thorny Questions Follow : Parallels Since the Sept. 11 attacks, the drone has become America's go-to weapon when it comes to tracking and killing extremists. But drones have raised many legal, moral and ethical issues. 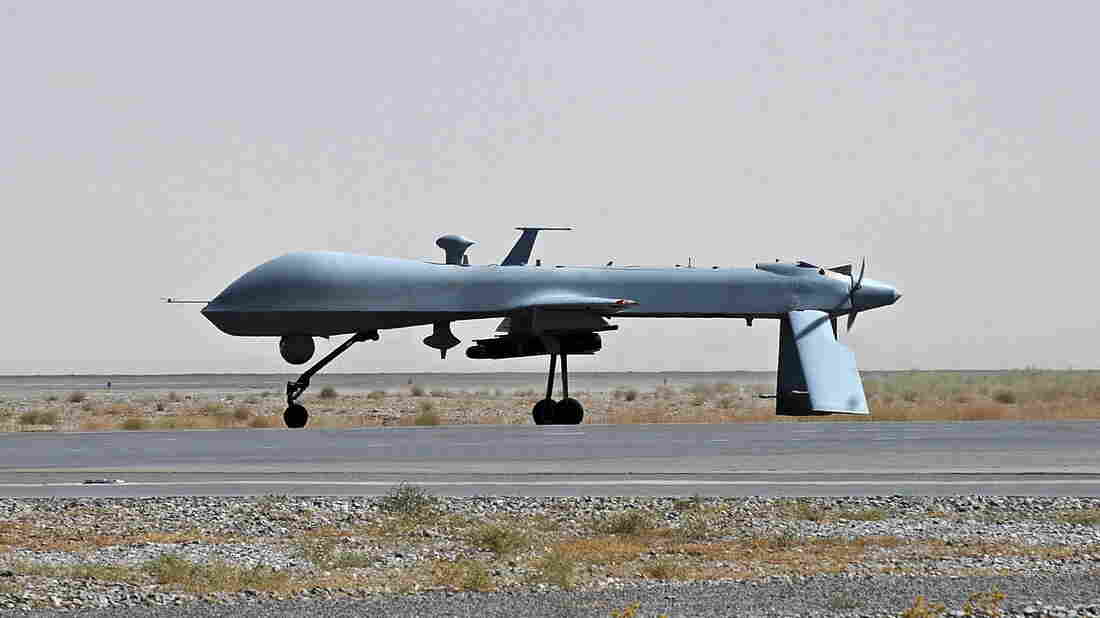 A U.S. Predator drone sits on the tarmac at the Kandahar military airport in southern Afghanistan in 2010. The U.S. has been using drones more and more frequently since the Sept. 11 attacks. They have been highly effective on the battlefield, but have raised legal and ethical issues. Massoud Hossaini /AP hide caption 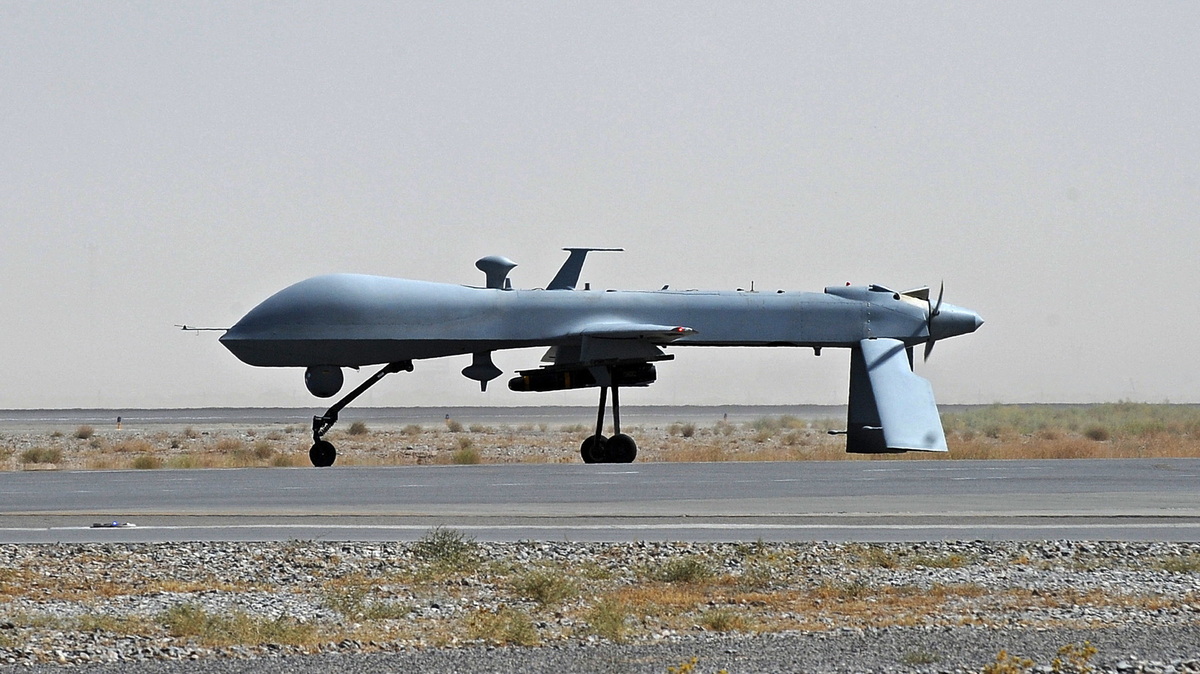 A U.S. Predator drone sits on the tarmac at the Kandahar military airport in southern Afghanistan in 2010. The U.S. has been using drones more and more frequently since the Sept. 11 attacks. They have been highly effective on the battlefield, but have raised legal and ethical issues.

Today in the skies over New Mexico, Air Force students are practicing for the kill.

They sit at terminals at Holloman Air Force Base, watching grainy images from a drone video feed. Thousands of feet below, at a desert training range, role players portray civilians and fighters inside a village. The students must find the proper target, then with a push of a button, they unleash a simulated airstrike.

"They left a compound and then they move into a series of very small adobe huts," recalls Deptula.

The U.S. decided not to use a 1,000-pound bomb to destroy the buildings, and potentially kill innocents.

They opted to use a Predator drone with tail number 3034, carrying a much smaller, 100-pound missile. But to their surprise, they lost control of the operation, and the missile fired before they expected.

Deptula and his boss, Gen. Chuck Wald, turned to each other. "'Who the heck did that?' Only we didn't use the word 'heck.'"

It was not the Air Force, but the CIA that had taken control remotely and fired — at an empty truck.

"The truck was destroyed," says Deptula, "and Mullah Omar and everybody inside the building came out and it was like kicking an ant hill."

Gen. Deptula says it was a missed opportunity. And it also raised issues about who would command these new weapons — the CIA or the Air Force. The Air Force soon won out in operations over Afghanistan, but the CIA is still using drones to this day on anti-terror missions elsewhere. 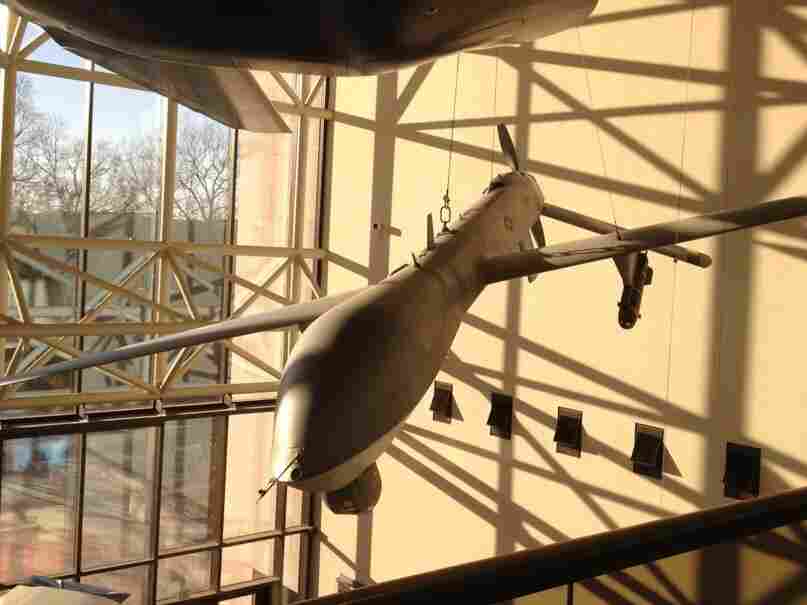 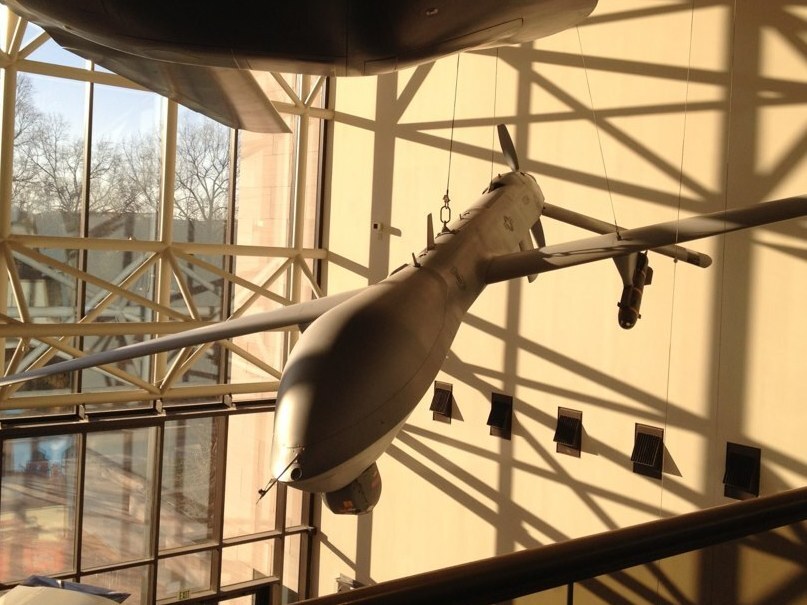 The first predator drone with tail number 3034 now hangs in the Smithsonian Air and Space Museum.

Despite the command confusions, Deptula says, the Predator drone soon proved itself beyond measure. Pilots were no longer in danger over enemy territory. The smaller drone missiles reduced the chances of civilian casualties. And commanders had constant surveillance over the massive and austere landscape of Afghanistan.

"It was an enormous increase, particularly operating in a country that was so remote that getting access to some of the operating locations that the Taliban were at simply wouldn't have been possible, even introducing men on the ground," Deptula says.

Those new drones — just a handful — helped bring a quick end to the Taliban government, in less than two months. Now there are several hundred armed drones. And the Air Force is training more drone pilots than fighter or bomber pilots.

That means the drone has become an easy tool to use in counter-terror operations far from places like Afghanistan. Maybe too easy.

"What it does end up doing is sort of lowering the threshold for us to decide to spy on someone or use force," says Rosa Brooks, a former top Pentagon official who wrote the book, How Everything Became War and the Military Became Everything. Brooks says a president can easily choose a drone strike and not risk any American casualties. And when the CIA's involved, it's all secret.

"What becomes troubling is when you're looking at situations whether it's like Libya or Yemen or Pakistan where officially we may be denying we have any involvement, but in fact we are not only involved but we are carrying out lethal strikes," says Brooks.

A rapid increase in drone use

The administration estimates as many as 116 civilians were killed in these strikes outside the war zones of Afghanistan, Iraq and Syria. Some analysts say the number is far higher.

The Obama administration recently declassified documents about its use of drone strikes, following a federal court order that sided with a lawsuit filed by the American Civil Liberties Union. The ACLU said the documents don't provide much clarity about the standards the government uses before it orders an airstrike.

That concerns defense analysts like Ben Fitzgerald with the Center for a New American Security. He says dozens of other countries are now turning to drones and could use them in secret airstrikes, just like the U.S.

Fitzgerald says the U.S. should come up with clear and open guidelines, so it can be a model to other nations.

"To the extent that we can push this through, we can push to the Department of Defense. I think that would send a much better message to the international community," says Fitzgerald.

So take it away from the CIA, and have the Pentagon run it exclusively?

"I think that would be a more helpful approach," Fitzgerald says.

A piece of history

For his part, Gen. Deptula, who was present for the first armed drone strike, says the congressional intelligence committees carefully scrutinize the CIA drone program. And he dismisses concerns about the overuse of drones or the rise of secret drones by other countries.

"It's a ridiculous argument, welcome to the world of war," says Deptula. "Ever since mankind has been in conflict there have been technological advantages on one side to get advantage over another. We're using these weapons systems under the most excruciating scrutiny and fully in compliance with the laws of armed conflict."

Not everyone agrees. And while the debate over drone use continues, what's clear is the drones are here to stay. And they've now become an icon.

At the Smithsonian's Air and Space Museum, not far from Lindbergh's Spirit of St. Louis, curator Roger Connor points to a gangly aircraft hanging from the ceiling with a small black missile perched under a wing.

"It's one of the more famous Predators in the fleet," says Connor. "At the start of our operations in Afghanistan in October of 2001, this particular aircraft became the first Predator drone to fire a Hellfire missile."