Accessibility links
Why China Wants To Squeeze North Korea A Little, But Not Too Much : Parallels China opposes North Korea's nuclear tests and has signed up for international sanctions. But China still conducts extensive trade and worries about a major crisis that would send refugees its way. 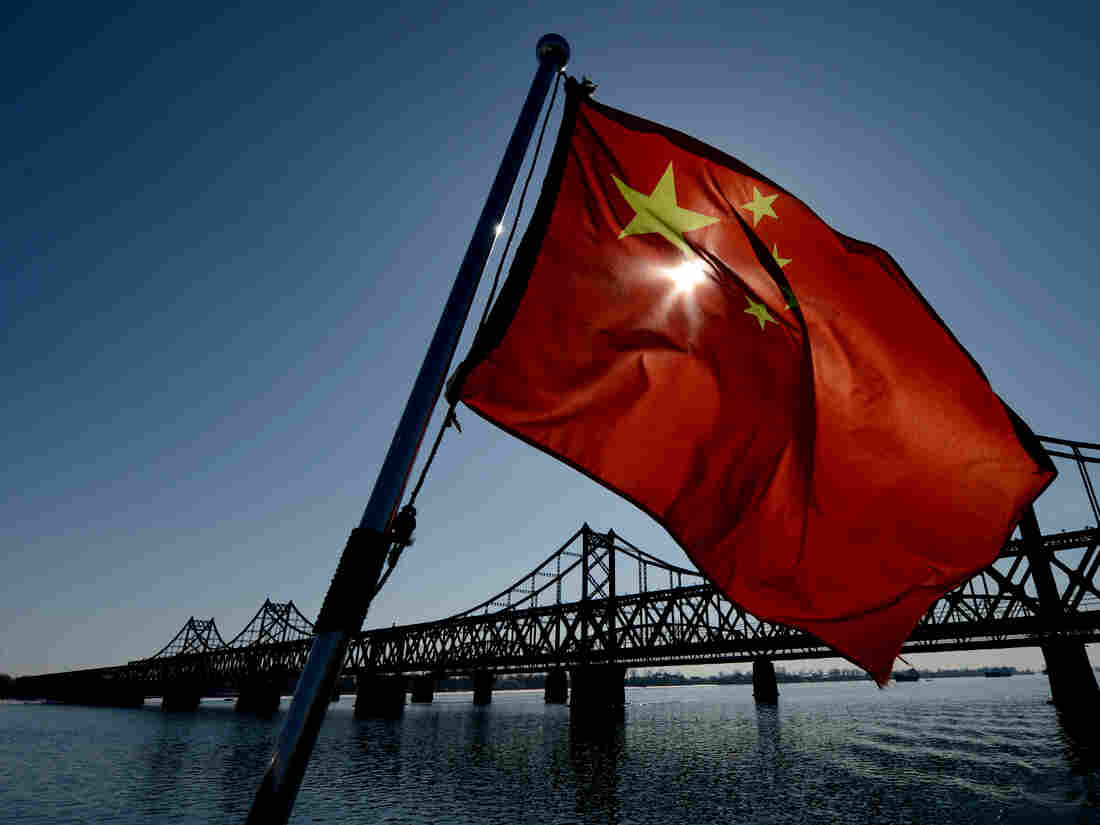 A Chinese flag flies on a boat next to the bridge that spans the Yalu River linking the North Korean town of Sinuiju with the Chinese town of Dandong. Most of North Korea's trade is with China, and much of it crosses the border here. Mark Ralston/AFP/Getty Images hide caption 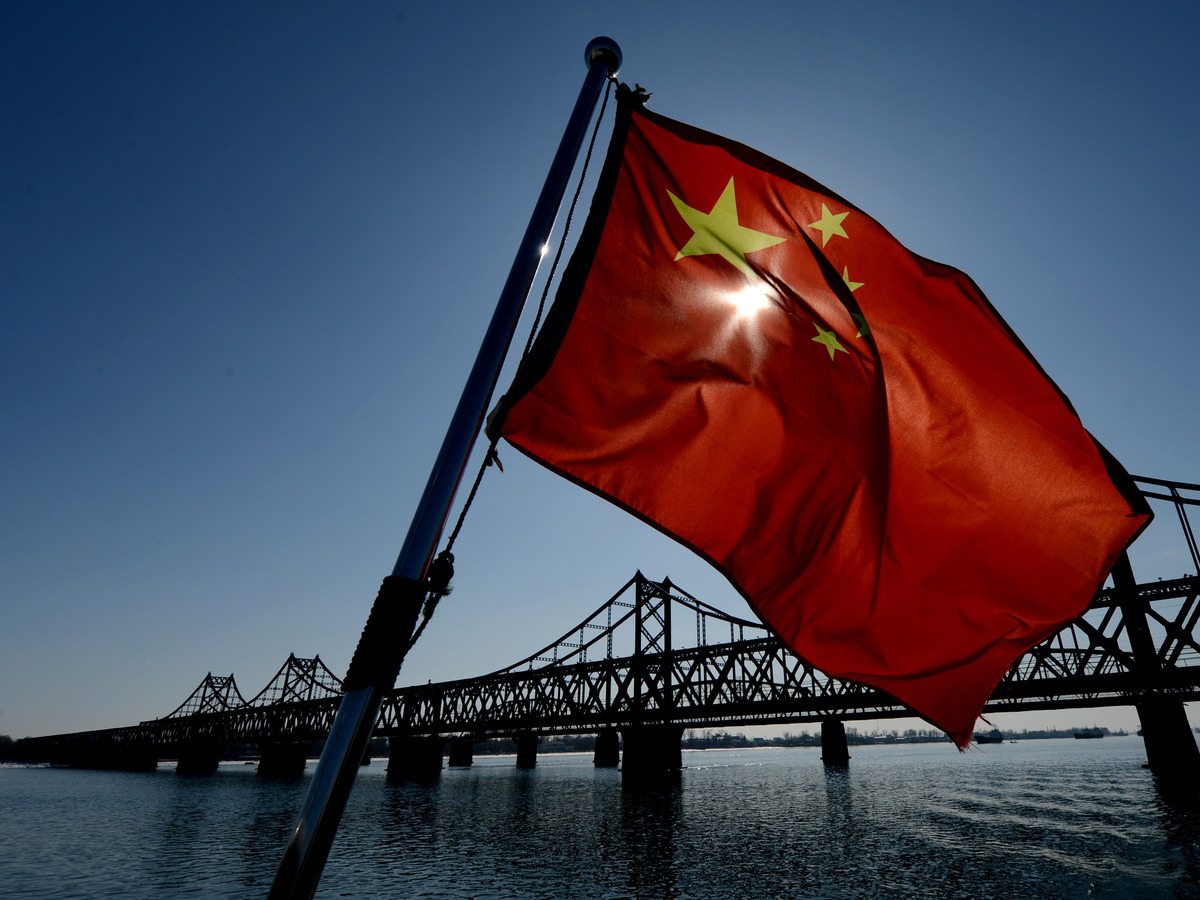 A Chinese flag flies on a boat next to the bridge that spans the Yalu River linking the North Korean town of Sinuiju with the Chinese town of Dandong. Most of North Korea's trade is with China, and much of it crosses the border here.

China was rattled physically and politically Friday by North Korea's nuclear test, its second this year and fifth overall. It caused a magnitude 5.3 seismic event that caused strong tremors in towns and cities on the border between the two countries, according to the Chinese media.

But as with previous tests, it's unlikely to provoke a strong Chinese response.

In a statement on its website, China's Foreign Ministry condemned Pyongyang's test, which it said "ignored widespread opposition within the international community." It added that Beijing "strongly urged North Korea to honor its pledges of nuclear disarmament, and obey the relevant resolutions of the U.N. Security Council."

"At a time when the security situation on the Korean peninsula and in Northeast Asia is extraordinarily complex, testing nuclear weapons is unwise," the official New China News Agency said in an opinion piece.

However, Beijing did not signal any concrete measures in response, except a possible resumption of six-party talks hosted by China. Pyongyang walked out on those negotiations in 2009 and vowed never to return or be bound by commitments it had made at them.

Beijing insiders have long argued that foreigners overestimate China's influence in North Korea. Many even go so far as to say that the North is distrustful and contemptuous of its old ally.

China has the greatest leverage

But the other countries most critical of North Korea — namely the U.S., Japan and South Korea — already impose heavy sanctions on the North and have few additional ways to apply pressure.

China still has more leverage than any other country, simply because North Korea conducts 90 percent of its trade with China, much of it through the city of Dandong on the Chinese side of the Yalu River.

Six months ago, the U.S. praised China's rigor in implementing United Nations sanctions, but trade figures are contradictory about the increase or decrease of goods crossing the border. Gauging the material smuggled across is even harder to estimate.

China has made it clear that it will not tolerate a regime collapse in North Korea, and any humanitarian crisis or power vacuum that might ensue. It wants to keep North Korea as a buffer and avoid the possibility that South Korea could someday control the entire peninsula, potentially allowing U.S. forces all the way up to the Yalu River. Another concern is that a crisis could prompt a flood of refugees. So Beijing continues to provide oil and other commodities to Pyongyang in the name of humanitarian assistance.

Aside from its official pronouncements, China has offered diverse and ambivalent assessments of who is to blame for tensions on the Korean Peninsula.

Following North Korea's fourth nuclear test on Jan. 6, South Korea ran out of patience with Beijing's efforts to restrain the North, and it turned to the U.S. to supply missile defense systems.

As a result, China's carefully cultivated diplomatic ties with South Korea went into a deep freeze, and accusations of policy failure flew fast and thick.

Fast-forward to today, and China has largely shifted blame toward Washington and Seoul.

"Mishandling the issue is not conducive to strategic stability in the region and could intensify disputes," China's Foreign Ministry quoted the president as telling the South Korean leader.

Facing a hostile alliance of U.S., South Korean and Japanese forces, North Korea's "security environment is very much like what China faced in the 1960s and 1970s," said an article on the military channel on Sina, one of China's top Internet portals.

"North Korea can't handle this threat with conventional weapons, so they can only develop nuclear ones," it said.

The Chinese commentary added that the U.S.'s "barbaric" intervention on the side of the Philippines in its disputes with China in the South China Sea, and its criticism of Russia over its involvement in Syria, was driving China and Russia into closer cooperation.

It suggested that North Korea might soon become their "junior partner."