Accessibility links
On Taiwan's Rural Kinmen Island, Modern China Beckons : Parallels The island of Kinmen is just 1 mile off the coast of mainland China, and many residents are divided over their increasingly cozy relationship with their wealthy neighbor. 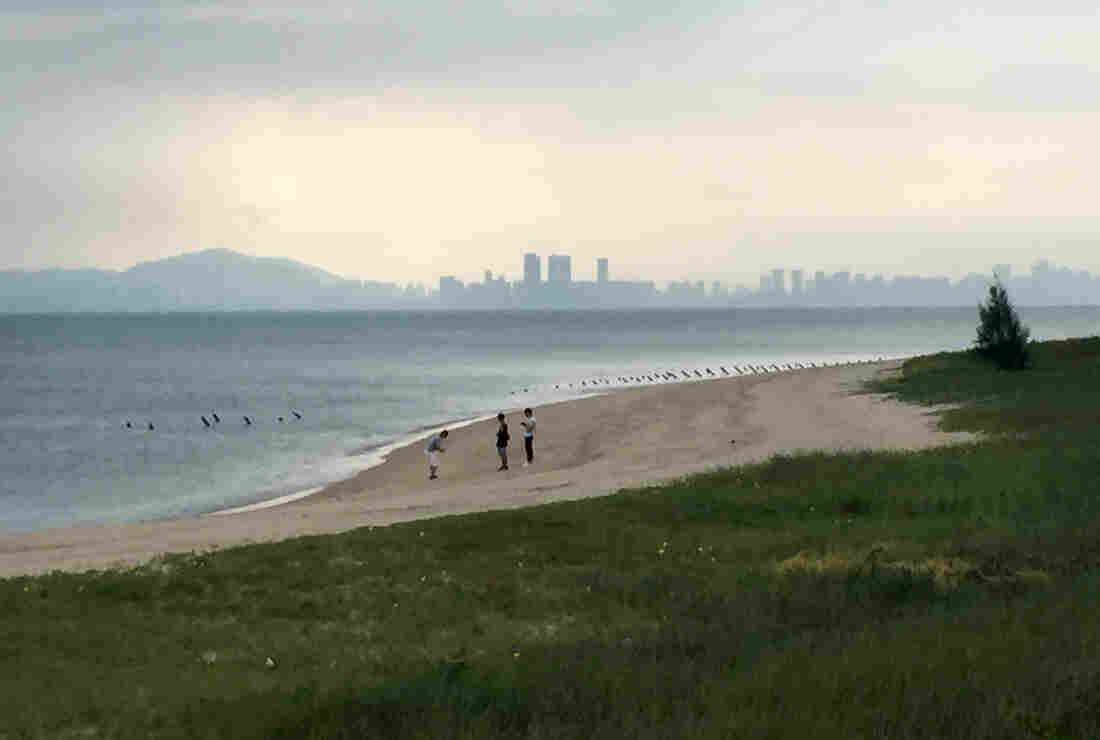 Skyscrapers in the mainland China city of Xiamen are seen in the distance from a beach on Taiwan's Kinmen Island. Rob Schmitz/NPR hide caption 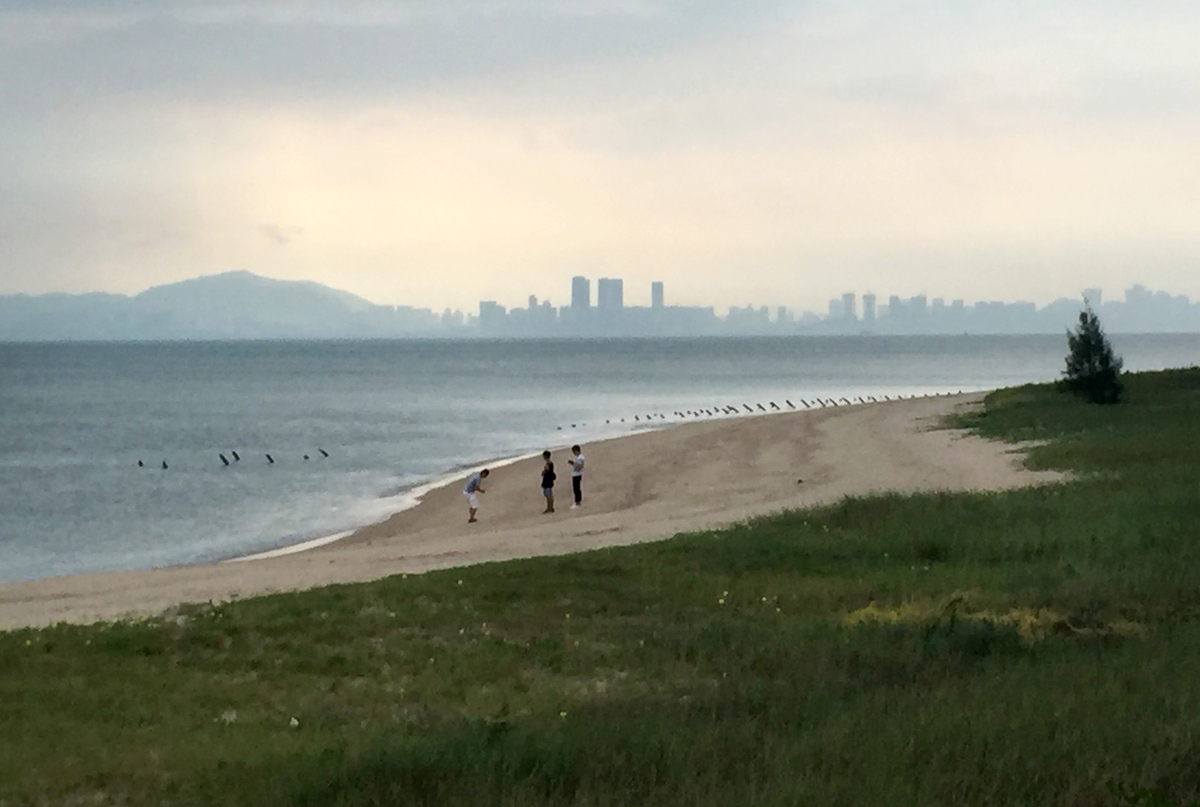 Skyscrapers in the mainland China city of Xiamen are seen in the distance from a beach on Taiwan's Kinmen Island.

Plastic water bottles, brown medicine vials, and foam coffee cups wash up on the beaches of Taiwan's Kinmen Island. This is the daily tide of garbage from the world's most populous nation, just 1 mile across the channel.

But it wasn't always garbage that came floating across from mainland China. Communist troops from China's Red Army stormed this beach in 1949. Thousands of Chinese soldiers who tried to take this island from Taiwan were massacred.

"You see that well? It's full of their bodies," says Yang Song Fa, a former Taiwanese soldier who drives his beat-up van through fields of sorghum and ancient water wells beyond the beach.

Yang stops the van with the clicking of a parking brake, steps out of his car, and walks through the sorghum, his rugby-player frame towering above the lush rows.

"See all these plastic bottles the farmers mounted on stakes?" he asks, pointing all around. "Those are places the farmers don't plow because there are dead Chinese soldiers buried underneath." 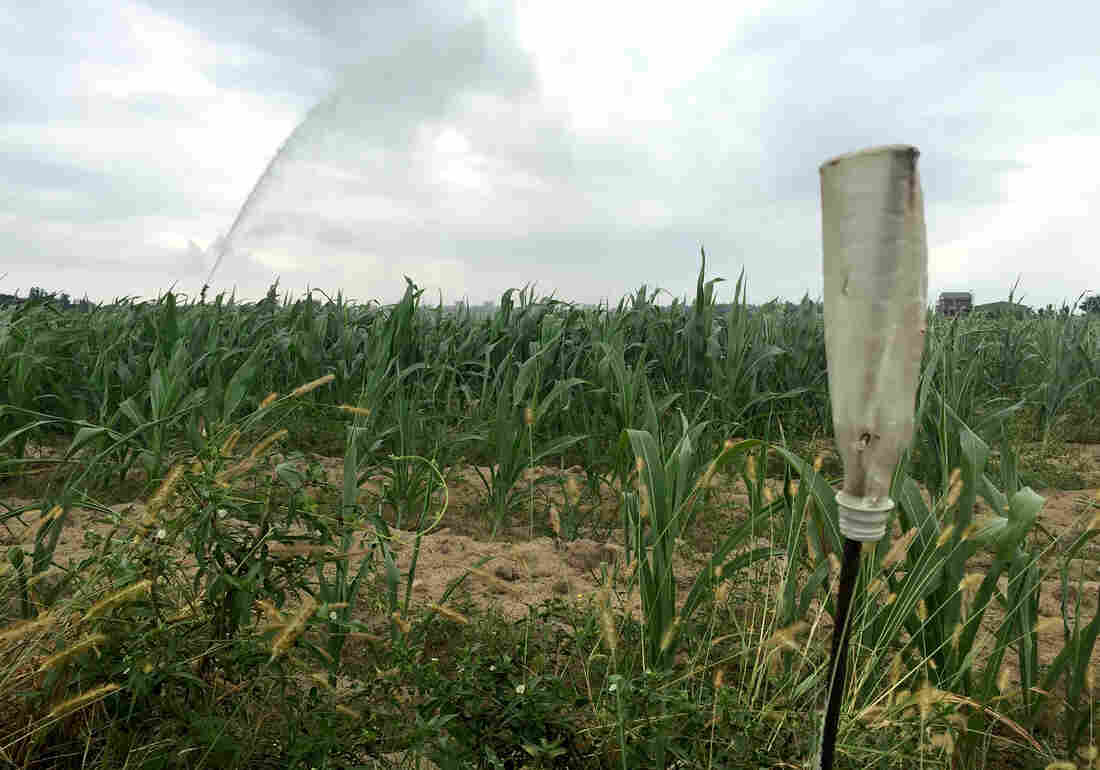 A rod with a bottle marks one of nearly a hundred sites where the bodies of thousands of Chinese soldiers are buried. Communist soldiers made an unsuccessful attempt at taking over the island in 1949. Rob Schmitz/NPR hide caption

More than 100 plastic tombstones rise above the sorghum in the distance.

"We were willing to leave their bones and not disturb them," he says. "I think how you treat others is important. Be inclusive. Be forgiving. Be tolerant. Drop the hatred."

Kinmen Island is heeding Yang's message. Decades after a bloody battle made the island, also known by its historical name Quemoy, the frontline of a long-standing cold war between Taiwan and China, relations are thawing. Its population of 130,000 belongs to Taiwan, but its island motherland is 120 miles away, and the steel and glass towers crowding mainland China's city of Xiamen beckon to residents of a largely rural island.

A steady flow of Chinese

At Kinmen's only harbor, hundreds of Chinese tourists disembark a ferry from the mainland, looking for an escape from the big city in the island's rolling hills, vast beaches and ancient villages.

"I'd like them to live here, too," says Kinmen Deputy Magistrate Wu Cheng Dian, the island's second-in-command. "I hope someday they can buy property here and their children could come to school here." 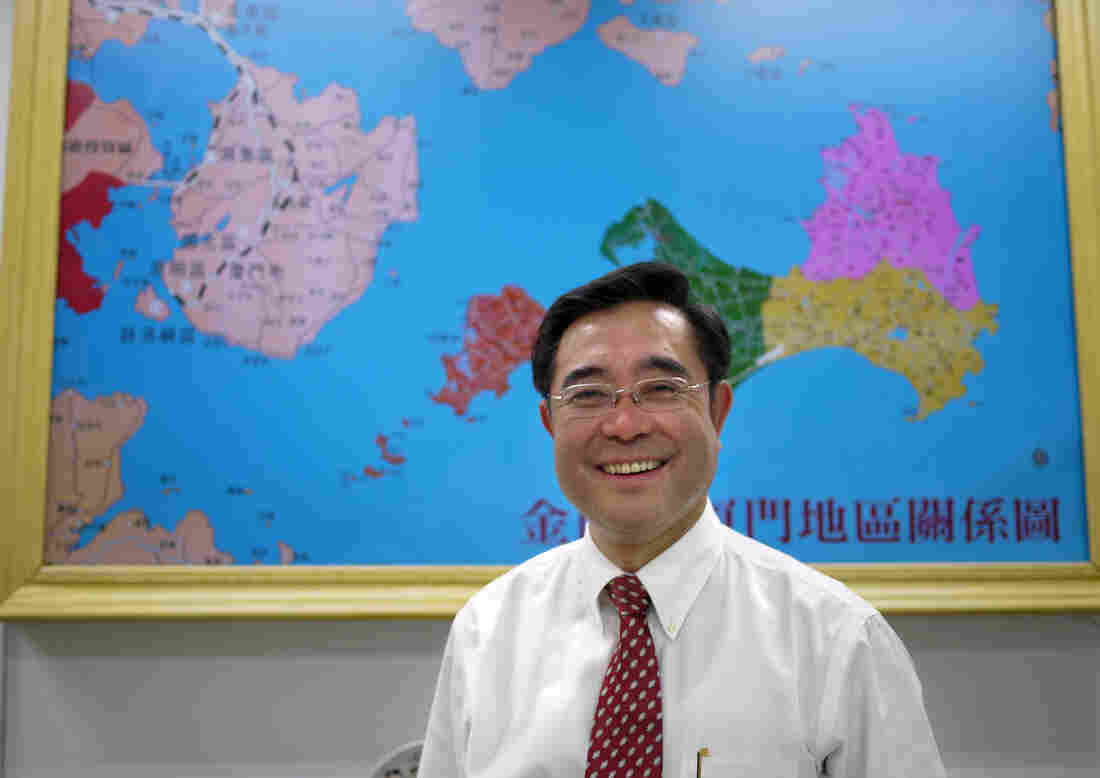 Kinmen Island Deputy Magistrate Wu Cheng Dian hopes to open his island to more business from mainland China. He'd like to build a bridge to the mainland and allow mainland Chinese to buy property on Kinmen. Taiwan's national government does not agree. Rob Schmitz/NPR hide caption

He says he'd like to see the island's population reach 300,000, more than doubling the current number.

Taiwanese laws make it nearly impossible for mainland Chinese to own land on Kinmen Island. But Wu wants to change that. He thinks China's government should be able to buy property here, too.

He supports a bridge from Kinmen to the mainland, a cruise ship terminal for Chinese ships, and he wants to allow mainland Chinese to use their own currency on the island.

Taiwan's national government has rejected all of these proposals.

"We hope both governments can overcome their problems and give Kinmen a chance to grow," Wu says. "Let's all take a deep breath. We can develop so fast if they would just let us."

At a bohemian restaurant inside the island's biggest town, Jincheng, ukulele instructor Xu Yi Teng, 26, wants to keep the mainland at more than an arm's length.

"There are so many Chinese people, and many of them are wealthy," Xu says with a look of worry. "If they come and buy as many houses as they want, Kinmen's local culture will be ruined."

Across the island in the ancient village of Shanwai, local culture is on display each morning as residents burn incense and fake money at a neighborhood Buddhist temple. Yang Yunu says she's not scared at all about an invasion of wealthy Chinese.

"The more people, the more money they bring," she says matter-of-factly. "I'm not worried about losing our traditional culture. We will influence them, they will influence us. It's all good."

But many islanders' opinions about the mainland are more nuanced.

"We're conflicted between belonging to Taiwan's free, democratic system, and the desire to make money," says Li You Zhong, a popular local television host on the island. "I think one thing we can agree on is that peace is priceless."

Li speaks from experience. He lived through an era when Kinmen and the mainland fired bombshells filled with propaganda leaflets at each other every — on the evenings of the odd days of the calendar — from 1960 to 1978.

On his first day of middle school, Li remembers, a classmate was killed by one. "They sounded like, 'Weeeeeeeee — Boom!'" Li screams. "They killed many people. We couldn't go to the beach because they were filled with landmines. We were always scared and worried about the future." 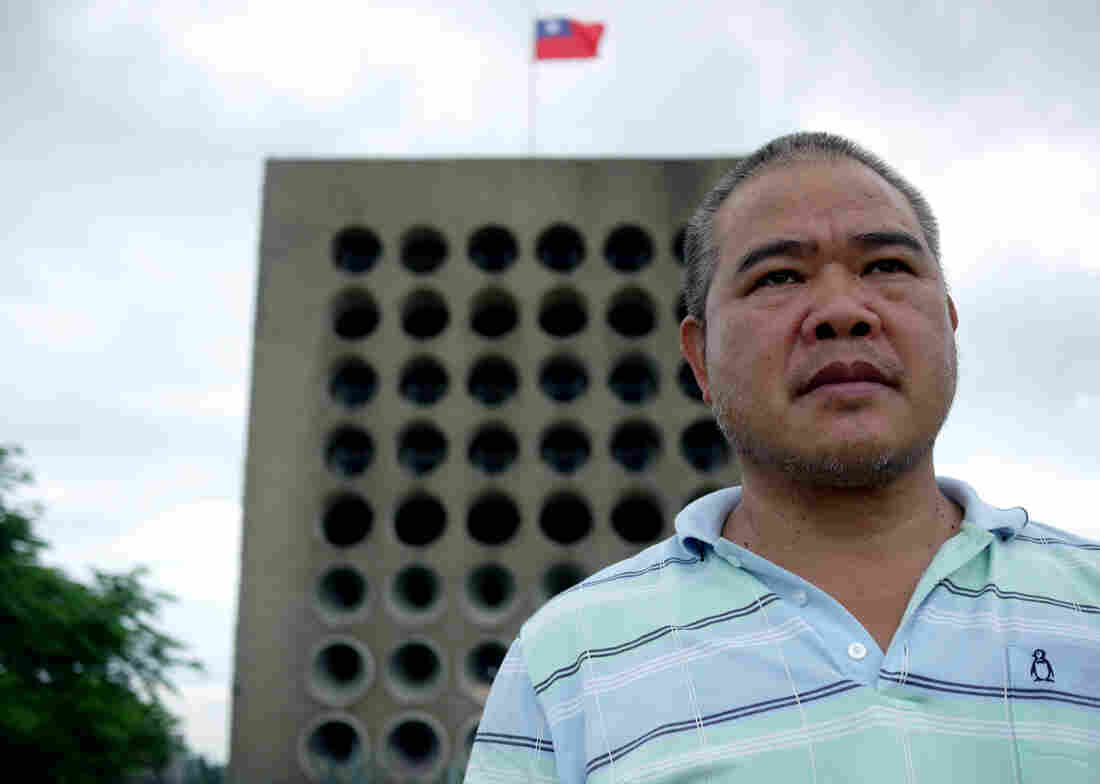 A relic from that bygone era stands proud on the island's western coast: a three-story tall speaker system that blasts Taiwanese songs and propaganda toward the mainland at ear-piercing decibels. A voice proclaims, "Stay healthy and long live democracy!" in Mandarin before launching into a popular ballad from the 1970s.

Below, Yang Song Fa, the burly man who gave a tour of the mass grave of Chinese soldiers, stands and smiles. The song reminds him of when he was a soldier decades ago.

"Back then, my mission was to destroy the mainland," he says. "When I retired, both sides had begun to make up. Now our economies are booming on both sides, but Kinmen's economy still isn't very good. Taiwan still treats us as a frontline in a battle."

But mainland China, says Yang Song Fa, doesn't see Kinmen as an enemy at all. He pauses to ask a question: "Why can't we put the people's interest first?"