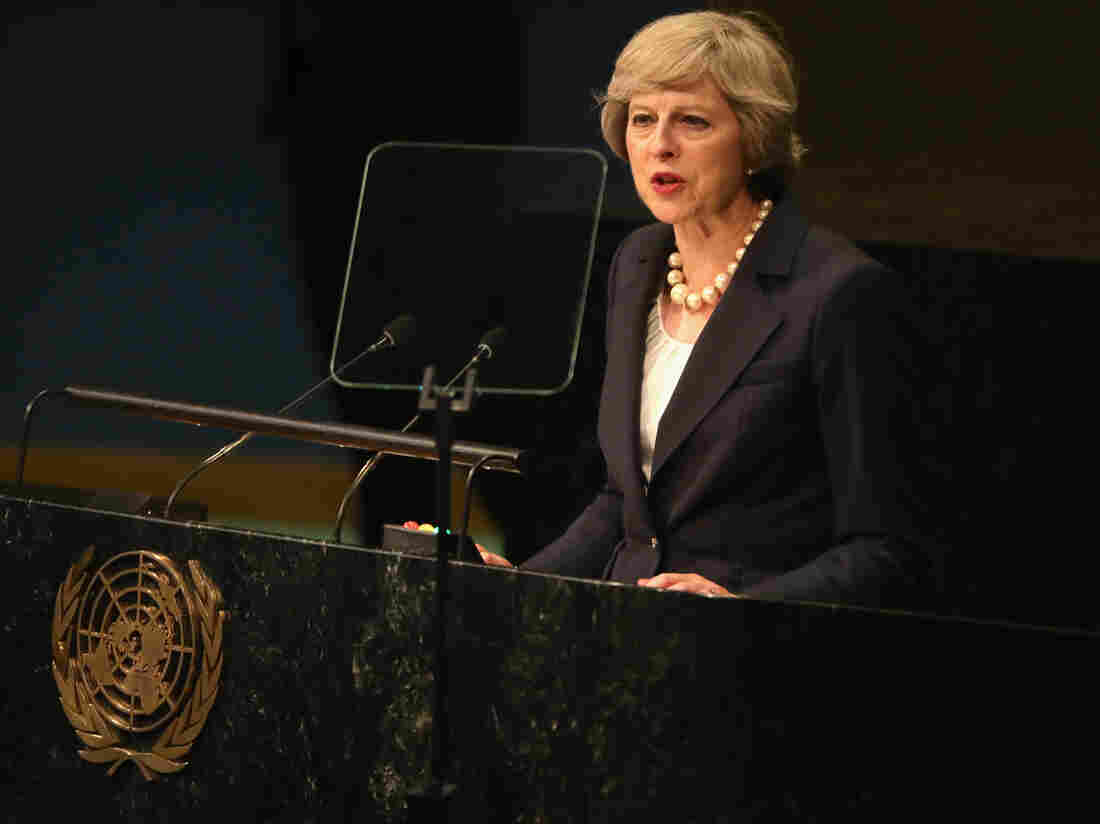 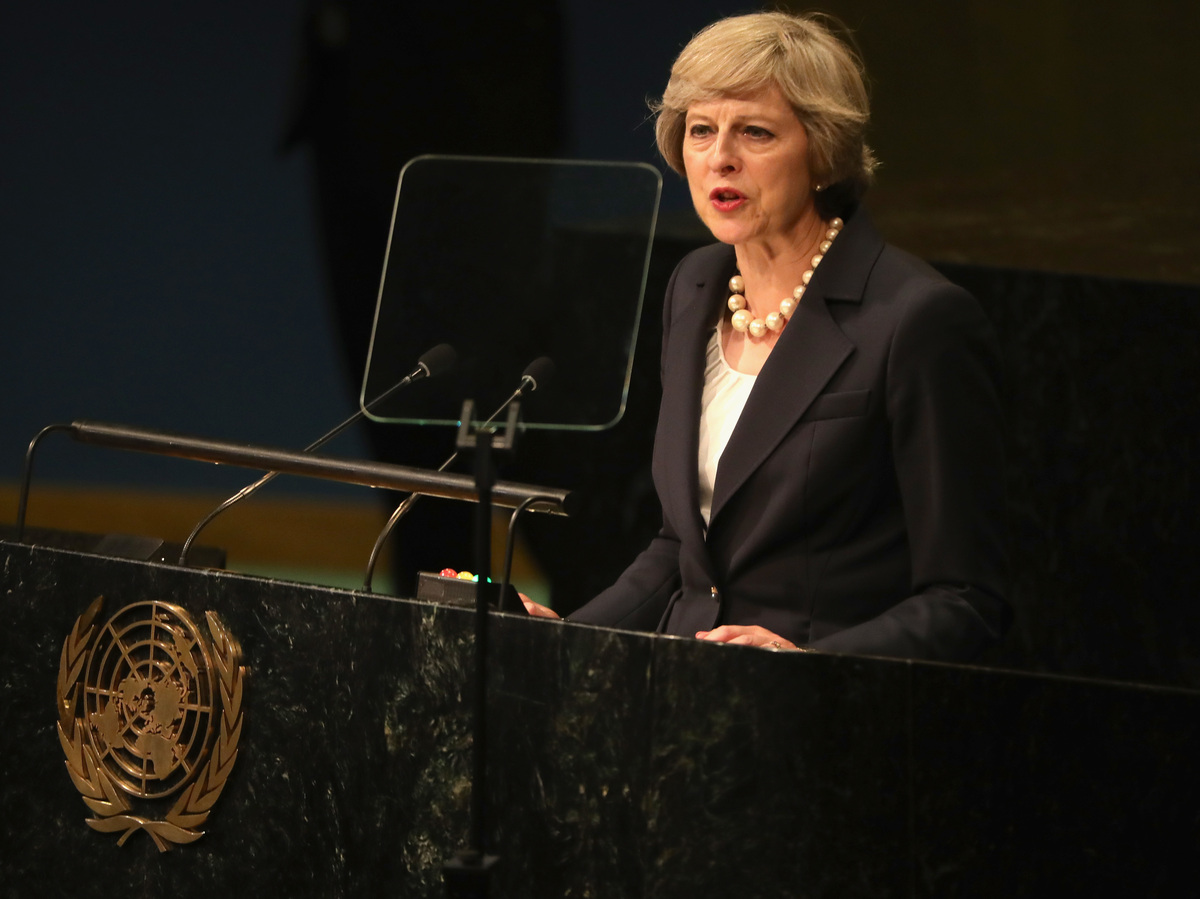 Before addressing the U.N. General Assembly on Tuesday, British Prime Minister Theresa May told NPR's Steve Inskeep that she is committed to seeing through Britain's departure from the European Union. She envisions a future in which her country maintains "a strong relationship with Europe" and is a global free trade leader.

"I'm very clear that we're going to make a success of coming out of the European Union," May said. "That does mean that we will be out there taking the opportunities now for free trade with a number of countries around the globe. I want the U.K. to be a global leader in free trade."

Here is a transcript of their conversation:

What, in your view, will improve in the daily lives of your people if you succeed in leaving the European Union?

Well, first of all, we will succeed in leaving the European Union, the British people voted to do that, and we will respect that vote, that democratic vote, and put that into practice. I think what people were voting for was a feeling of more control in a number of areas over their own lives, more control, for example, by the British government over who could come into the United Kingdom. You have those controls here in America, the ability to decide who can come over and work in America, for example. So I think people wanted to see more control for the British government and that was one of the issues.

Forgive me, I understand that people wanted to end the free movement of people [and] keep out foreigners. How does it make people's lives better?

What's going to change in the future? Well, I'm very clear that we're going to make a success of coming out of the European Union. That does mean that we will be out there taking the opportunities now for free trade with a number of countries around around the globe. I want the U.K. to be a global leader in free trade. Why is that important? It's important because it brings growth, prosperity and jobs to people, and that's about their daily lives.

Are you going to be able to deliver on free trade with other countries such as the United States?

Well, there's a limit to what we can formally sign up to while we're still members of the European Union. And obviously, one of our negotiations is going to be our trade relationship with the EU.

But I am very clear, and I've been talking to leaders, I've talked to [President] Obama, I've talked to other leaders around the world, and there's a real interest in ensuring that we can develop the economic and trading relationship between the U.K. and a number of other countries, including the United States. And while I was here in New York, I took the opportunity to meet with a number of U.S. investors, companies that are in the United Kingdom, and you know, every morning, every working day, a million people wake up in the United Kingdom and go to work for an American company. And actually, every day in the United States, a million people wake up and go to work for a British company.

So we've already got a strong bilateral relationship in economic terms. We've obviously got a special relationship that the U.K. and America have had for many, many years which will continue. And I am confident that we can build a really good trading partnership for the future.

Are you sure you are going to be able to make life better once Brexit is complete?

There are opportunities for us once Brexit is complete and I'm absolutely clear that we are going to take those opportunities. We're going to make a success and people will see a difference. What I said about my government is that it will be a government that will work with everyone. I want to see an economy that works for everyone and a society that works for everyone in the U.K. And that's about spreading the benefits of economic growth across the country and among people. And there's a number of ways in which we will do that. I think leaving the European Union, with the opportunities it gives us for the trading relationships around the rest of the world, will be an important part of that.

I know that your goal is to keep access to the single European market if you can, while also ending the free movement of people. A number of leaders of other European countries have expressed skepticism. Do you really believe it's possible to deliver on that?

Well, yes. The vote was clearly a vote that people wanted us to bring control into the movement of people from the European Union into the United Kingdom. But if I may, I haven't said in specific terms exactly what trade deal we want with the European Union once we have left. And there are a number of models at the moment. Norway has a relationship with the EU which involves the free movement of people but also access to the single market.

They pay for that right.

Well, what I want is for the United Kingdom to be able to forge its own relationship with the European Union. We're looking for that new relationship. We voted to leave the EU. We didn't vote to leave Europe. So we want to continue to have a strong relationship with Europe and it's in our interest, our economic interest, that the European Union continues to be strong. We will be working to negotiate a deal that will be of benefit not just to the U.K. but actually a benefit to the rest of Europe as well.

What have you thought, Prime Minister, as you have read — and I'm sure you've seen — many articles in which people have said that British voters were sold an unrealistic plan and now the government has no idea how to implement it?

No, the government is working very hard on our preparations for the negotiation. I've set up a new government department, our department exiting European Union that is focusing on the work for those negotiations. The technicality is that we have to write a letter to trigger something called Article 50 to start the process. We haven't done that yet because we're just taking a few months to do that, to do that preparation. But I think if you look back at the vote, the issue of membership of the European Union had been an issue for the British people with much comment on it for many years now. People had the opportunity to have their say. They had their say. They said they wanted us to leave and that's what we'll be doing.

What qualifies Boris Johnson best among anyone else to be the foreign secretary of Britain?

I think Boris is making an excellent job as foreign secretary. He's with me here in the United Nations meeting a number of his opposite numbers, participating in some important talks, actually, the talks about how we how we are going to deal with Daesh [ISIS] in Syria, a terrorist threat that of course we and the United States are working together as part of the coalition in Syria and Iraq against against Daesh. And Boris is forging his role as the foreign secretary and taking the message that I'm taking across the world, which is that we want to work across the world, here in the United Nations and bilaterally, both to forge new trade relationships but also crucially to work together with other countries to deal with the key challenges we all face, such as terrorism and migration.

What were you able to tell the U.S. banking leaders to reassure them that they can still get access to Europe from London?

Well, one of the purposes of my meeting with U.S. investors, and that included U.S. banks, was to hear from them what their concerns are and what their key issues are as we go forward for our negotiations. And I was able, I hope, to reassure them that I want to ensure the best possible deal for the U.K. in trade with the European Union, not just in goods but in services. I hope the message they took was that I recognize the importance of financial services and the City of London as an important international financial center.

Do you make any promises like we won't do anything that denies you access to Europe from London?

We are going to go out there and I'm ambitious for getting the right deal for trade and goods and services between the U.K. and the United States. That's what I'm going to be doing. We're listening to U.S. businesses. We listen to U.K. businesses and other investors in the U.K. about what matters to them.