Accessibility links
Criticized Abroad, Philippines' Leader Rodrigo Duterte Remains Hugely Popular In Home City : Parallels President Rodrigo Duterte has earned many critics for his brutal war on drugs. But in Davao City, where he was mayor for more than 20 years, many say he transformed the city for the better. 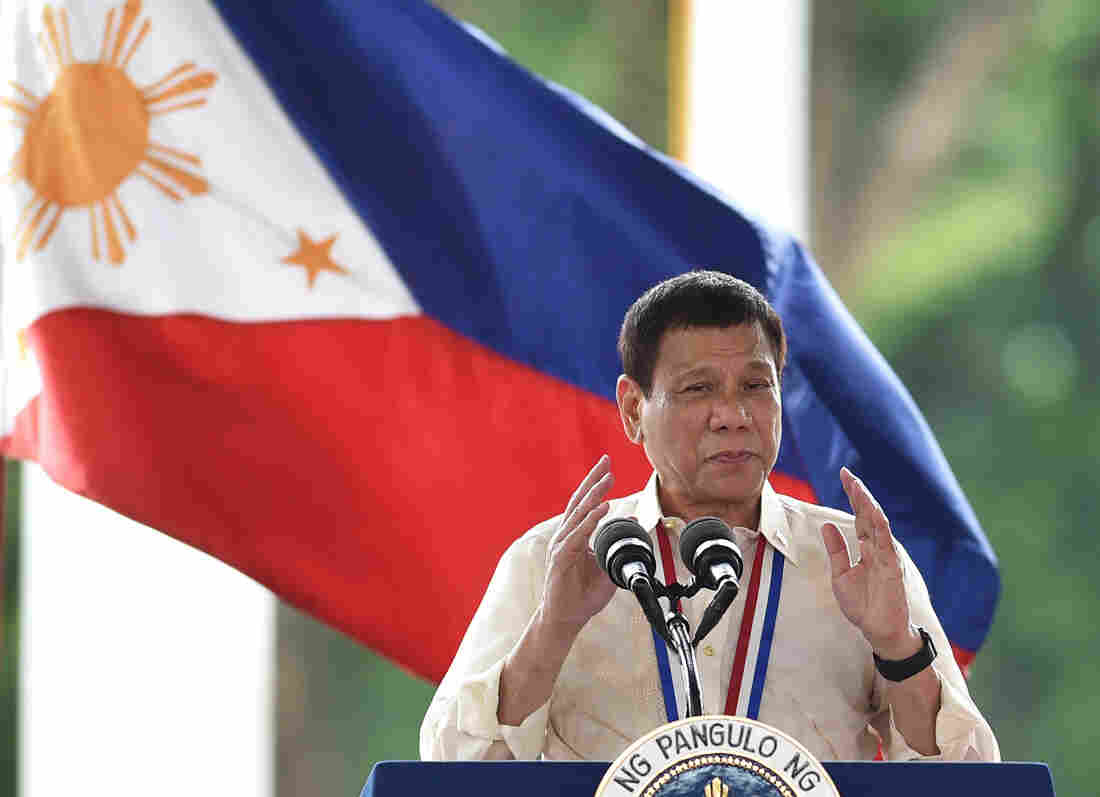 Philippine President Rodrigo Duterte speaks in Manila on Aug. 29. Duterte's war on drugs has drawn widespread criticism from human rights groups. But in Davao City, where he was mayor for more than 20 years, he remains extremely popular among residents who say he brought order and improved life in what was a largely lawless city. Ted Aljibe/AFP/Getty Images hide caption 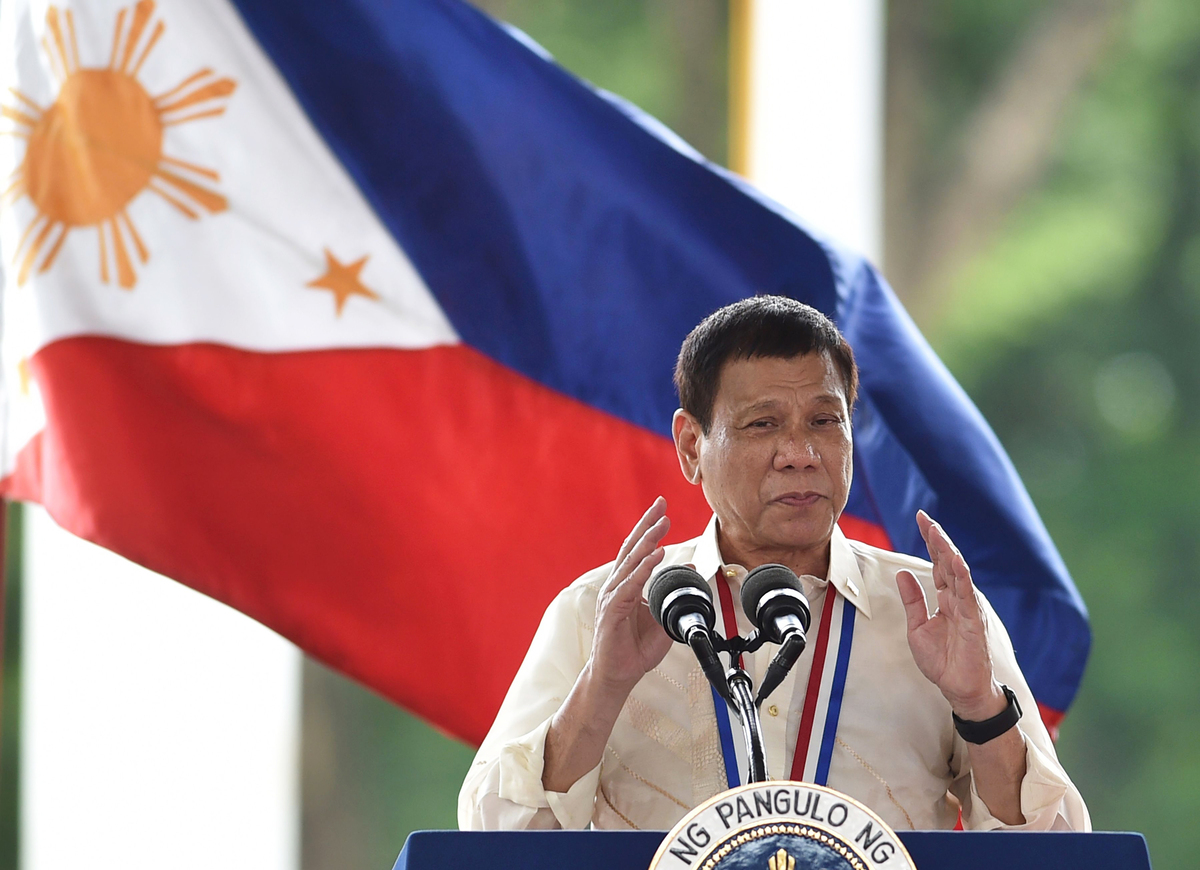 Philippine President Rodrigo Duterte speaks in Manila on Aug. 29. Duterte's war on drugs has drawn widespread criticism from human rights groups. But in Davao City, where he was mayor for more than 20 years, he remains extremely popular among residents who say he brought order and improved life in what was a largely lawless city.

Back in the 1980s, Davao City was a largely lawless city on the largely lawless island of Mindanao, known to the wider world mostly for its Muslim and communist insurgencies.

But on this day, I'm sitting at a Krispy Kreme in the SM Mall, meeting with Vicente Lao, the chairman of the Mindanao Business Council. If Duterte had not been mayor of Davao, he says, this mall probably wouldn't be here. And without Duterte, he continues, Davao wouldn't be one of the safer cities in the country.

Lao remembers what it was like before Duterte took charge in 1988, a period when a communist insurgency was near its peak. Lao was a contractor at the time, trying to build a bridge.

Duterte's controversial tactics have gotten the attention of the international community.

"I will not [stop] until the last pusher on the streets is fully exterminated," the president said Monday on a visit to Davao City. "Make no bones about it."

He became president less than four months ago, and his war on drugs has already claimed more than 3,000 lives, many of them extrajudicial killings by the police, according to human rights groups.

The critics say he employed these same tactics during the more than 20 years he was mayor in Davao. The so-called Davao Death Squad killed hundreds with his support — if not his orders — according to Human Rights Watch and others.

Duterte doesn't dispute the body count; during the election campaign, he suggested it may have been higher — as many as 1,400. And his success in cleaning up Davao — his track record there — is the main reason he was able to win election as president in May. 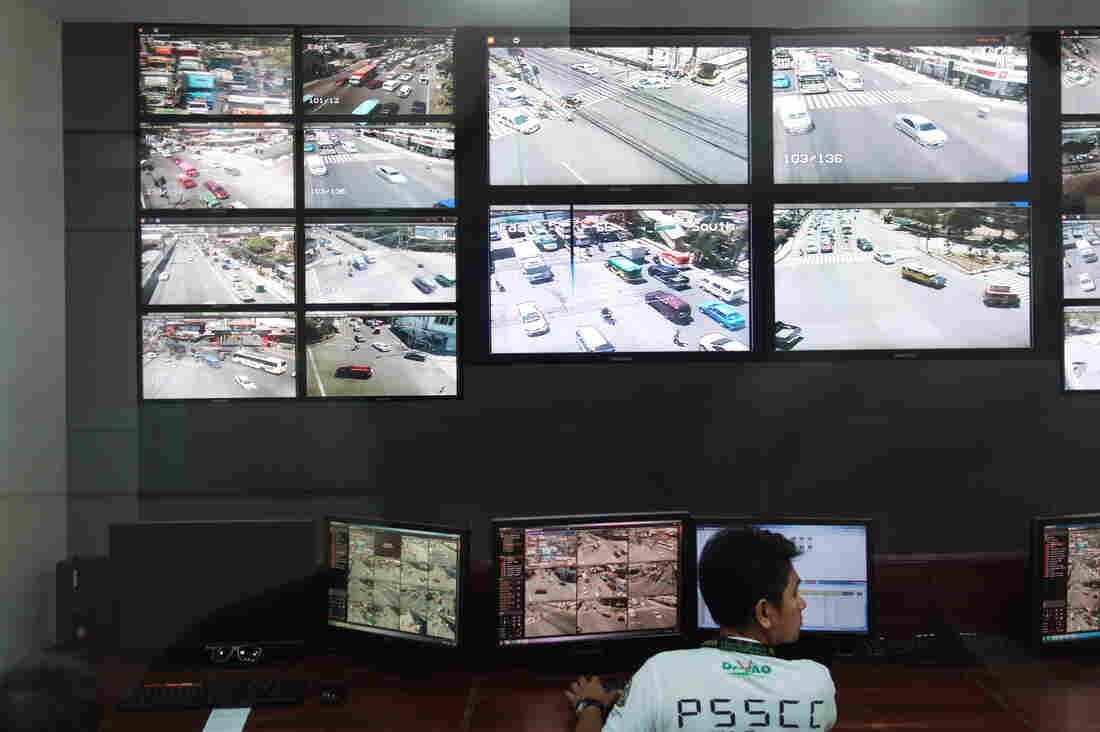 When Duterte was mayor of Davao City, he established a surveillance center as part of his efforts to bring down crime. Michael Sullivan for NPR hide caption 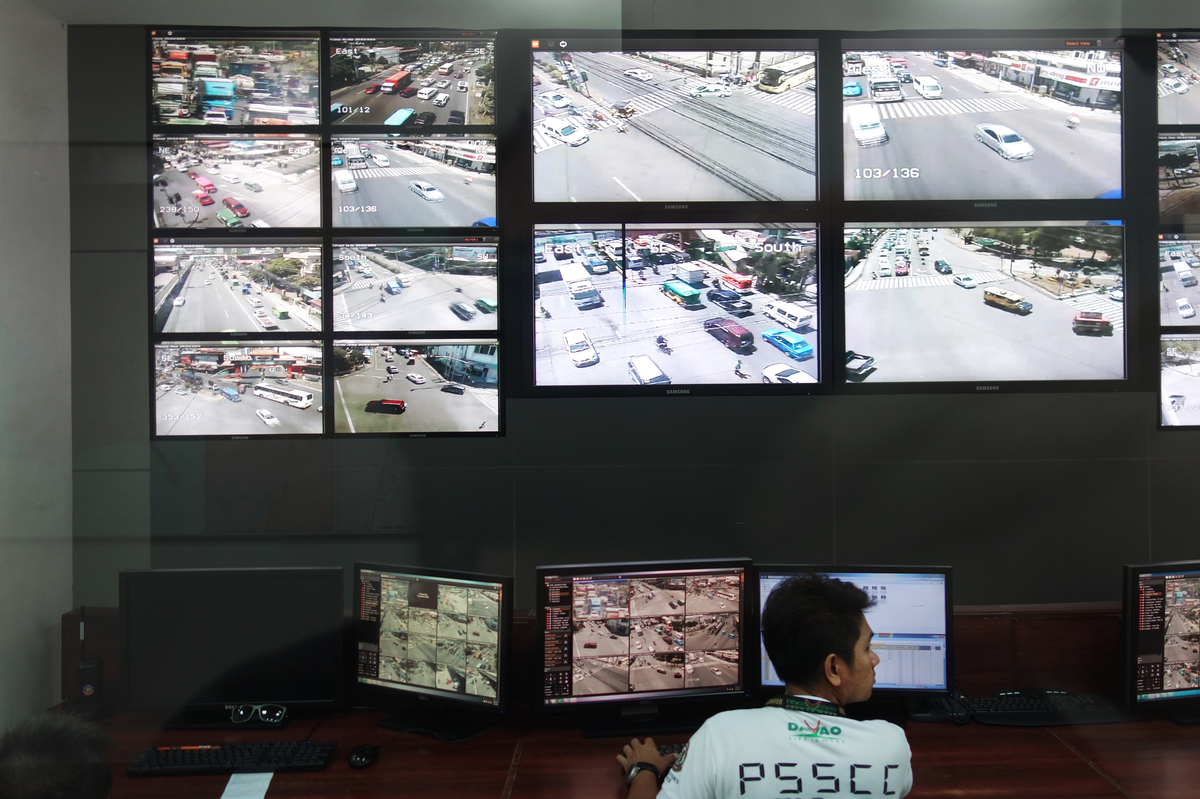 When Duterte was mayor of Davao City, he established a surveillance center as part of his efforts to bring down crime.

Davao journalist Edith Caduaya says Duterte campaigned on a simple theme: Elect me, and I'll do nationally what I did in Davao.

"The criminals, they fear him. But the law-abiding citizens, they love him," she says.

It's a sentiment that's easy to understand in a country where the drug epidemic, mostly methamphetamines, has grown so bad that many Filipinos seem willing to look the other way if the killings help reduce the drug problem. And in Davao City, solving the problem appeared to take precedence over everything.

"He's very serious and very firm in his decision not to allow drugs in the city. Zero tolerance in the city," says police chief inspector Ronald Lao, who is no relation to Vicente Lao of the business council.

Ronald Lao says the war on drugs has helped the city, and he offers an example. A gram of methamphetamine in Manila sells for 4,000 pesos, or about $90, he says. It costs nearly twice that in Davao City because of the risks faced by the sellers.

In a country where the law is often flaunted with glee, Davao City is a place with many rules, which are strictly enforced thanks to Duterte. Now that he has moved to Manila, his daughter, Sara Duterte, has become mayor.

The city has an anti-littering ordinance and a 10 p.m. curfew for minors, and there's no smoking in public. Duterte once forced a South Korean tourist to eat his cigarette after lighting up on a public street.

Duterte set up a 911 emergency response center, the first of its kind in the Philippines. Next to it is the Public Safety and Security command center, where technicians monitor hundreds of cameras scattered around the city, capturing suspicious activity with a simple keystroke.

Duterte believes that you "cannot guarantee development if your peace and order, security and safety, is not guaranteed for all citizens. So that's a prerequisite for real development of the city," says Emmanuel Jaldon, who oversees facilities.

Duterte is also credited with helping women and children. During his time as mayor, the city established a center for victims of domestic violence, along with a development code for women and a welfare code for children, modeled after the U.N. Convention on the Rights of the Child.

"His heart is bigger than his mouth. He's not perfect, but he's doing his best for the women and children," says Jeanette Ampog, who runs Talikala, an aid group in the city that helps sex workers and trafficking victims. "He's very tough, but he can be soft with women and children."

Duterte has unofficially decriminalized prostitution in Davao despite a nationwide ban.

"Because the president believes these women are human beings and deserve to be protected and they're only doing this to earn for themselves and their family," says Ampog. "And since the government can't provide employment, he said he'll protect them in the streets."

He even holds an annual Christmas party for the sex workers, and has told them that if any clients abuse them, those men will be punished.

Despite his tough talk about killing drug pushers and addicts, Duterte also funded the first municipal drug rehabilitation center in the Philippines.

Kenneth Tee, now an instructor at the center, was sent here after being busted 10 years ago for a longstanding methamphetamine problem.

"The mayor was very good at giving us a chance at getting back into the mainstream," he says. "If I was not given this opportunity, I'd probably be in jail. Or maybe I'd be killed already by drug lords."

And what about the allegations against Duterte? That he ordered, or at least condoned, the extradjudicial killings in Davao as part of his war on crime and drugs?

Local journalist Edith Caduaya, who has followed him for decades, demurs.

She says she's OK with that ambiguity, and so are many in Davao — and in the rest of the country. So far.