Accessibility links
The American Diplomat Who Helped Bring An End To Colombia's War : Parallels An American negotiator played a key role in helping Colombia end it's half-century war between the government and the FARC guerrillas. Here's how he did it. 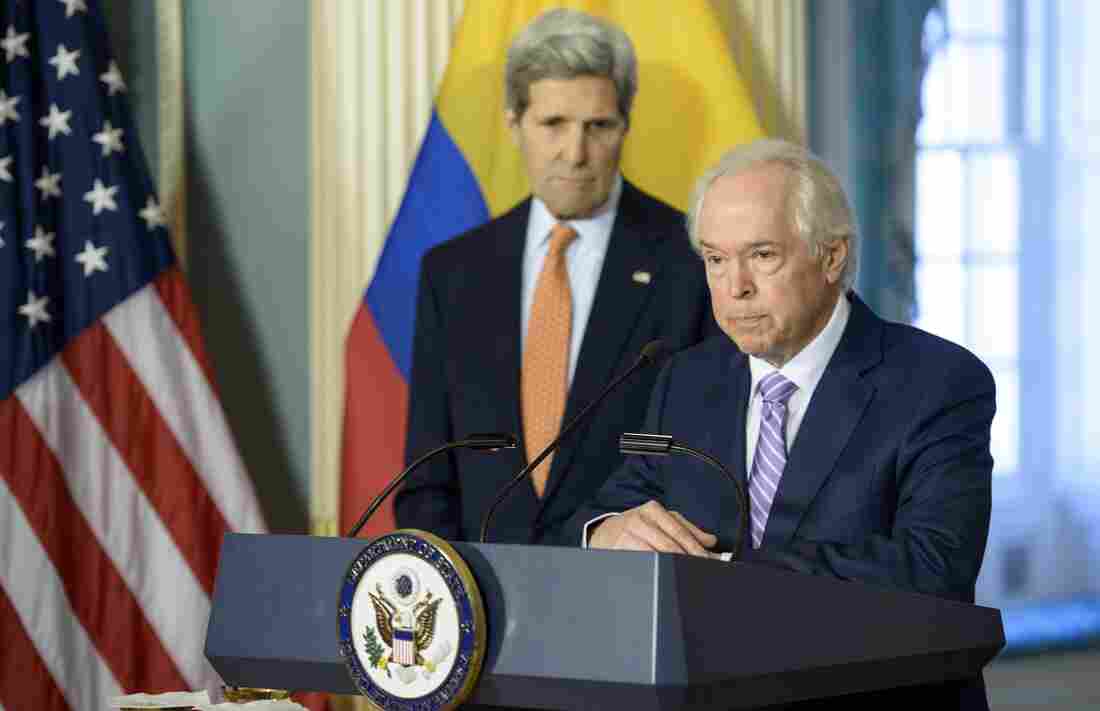 U.S. envoy Bernard Aronson speaks at the State Department in Washingon on Feb. 20, 2015. Secretary of State John Kerry said Aronson announced that Aronson would be the special envoy to Colombia, where he helped negotiate an end to that country's 52-year war. BRENDAN SMIALOWSKI/AFP/Getty Images hide caption 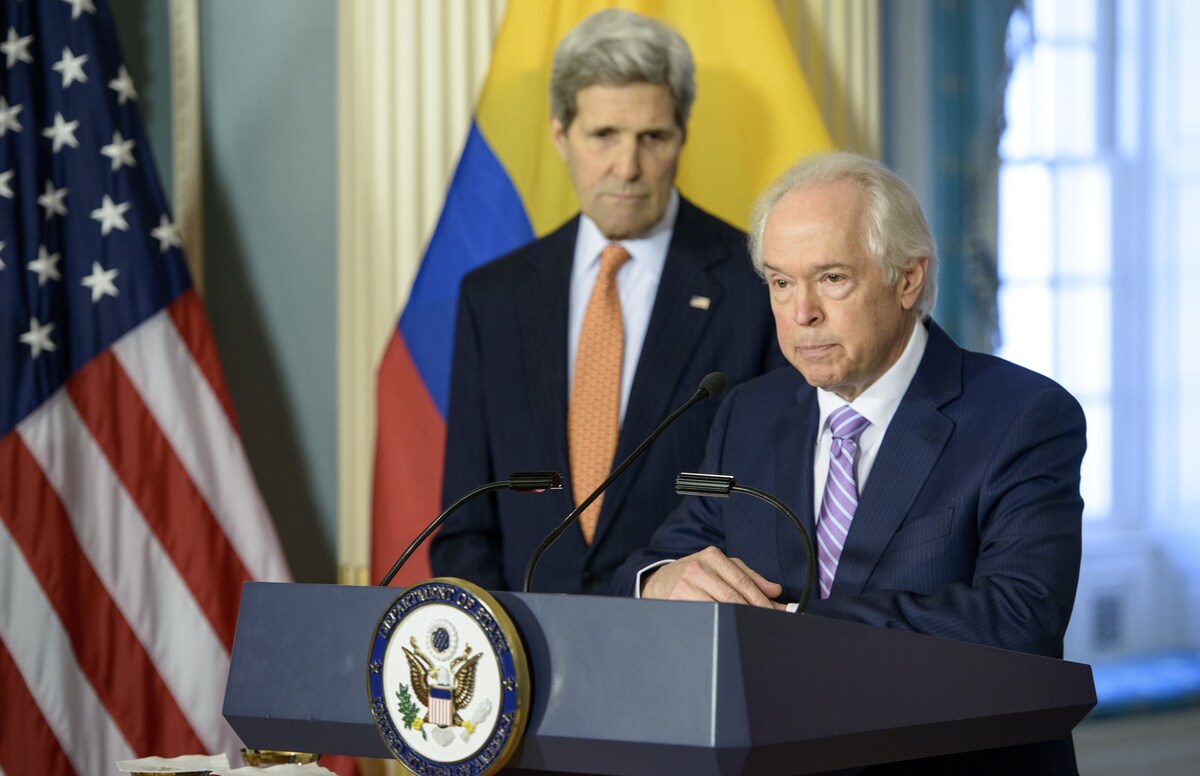 U.S. envoy Bernard Aronson speaks at the State Department in Washingon on Feb. 20, 2015. Secretary of State John Kerry said Aronson announced that Aronson would be the special envoy to Colombia, where he helped negotiate an end to that country's 52-year war.

When the Colombian government and Marxist rebels ink a final peace accord Monday to end a 52-year guerrilla war, an American envoy will be one of the special guests at the signing ceremony.

Last year, the Obama administration dispatched veteran U.S. diplomat Bernard Aronson to Havana, Cuba, the site of the Colombian peace talks. The negotiations had turned contentious and had dragged on for nearly three years. But Aronson was a reassuring presence and helped the two sides overcome numerous roadblocks as they moved toward a final accord.

"A lot of it was just trying to be a bridge over troubled waters," Aronson told NPR in a Skype interview. He called the peace treaty "the final chapter of a very, very long drama."

It's one many Colombians thought they would never live to see.

The war between the government and the Revolutionary Armed Forces of Colombia, or FARC, began in the 1960s as the rebels pushed for land reform and social justice. But over the years, the FARC became deeply involved in drug trafficking, extortion and illegal gold mining.

These criminal activities provided the FARC with cash, the guns and supplies to keep fighting, even as nearly every other left-wing guerrilla group in Latin America was either defeated or disarmed as the Cold War ended.

The fighting in Colombia killed some 220,000 people and uprooted more than 5 million from their homes. Three previous efforts to negotiate with the FARC dating back to the 1980s had failed.

But following a U.S.-backed military offensive that cut the FARC's troop strength in half, to about 7,000 fighters, the rebels agreed to open a new round of talks in Havana in November 2012.

As the peace process moved into its final phase, Aronson, who runs a private equity firm in Washington, was named special U.S. envoy to the negotiations. His selection was due to his role in stopping a previous war.

"Both guerrilla groups came to believe that the military option wasn't going to succeed. Both made pragmatic decisions to come in from the cold," Aronson said. "And in both countries, you had courageous leaders who were willing to make peace with the left." 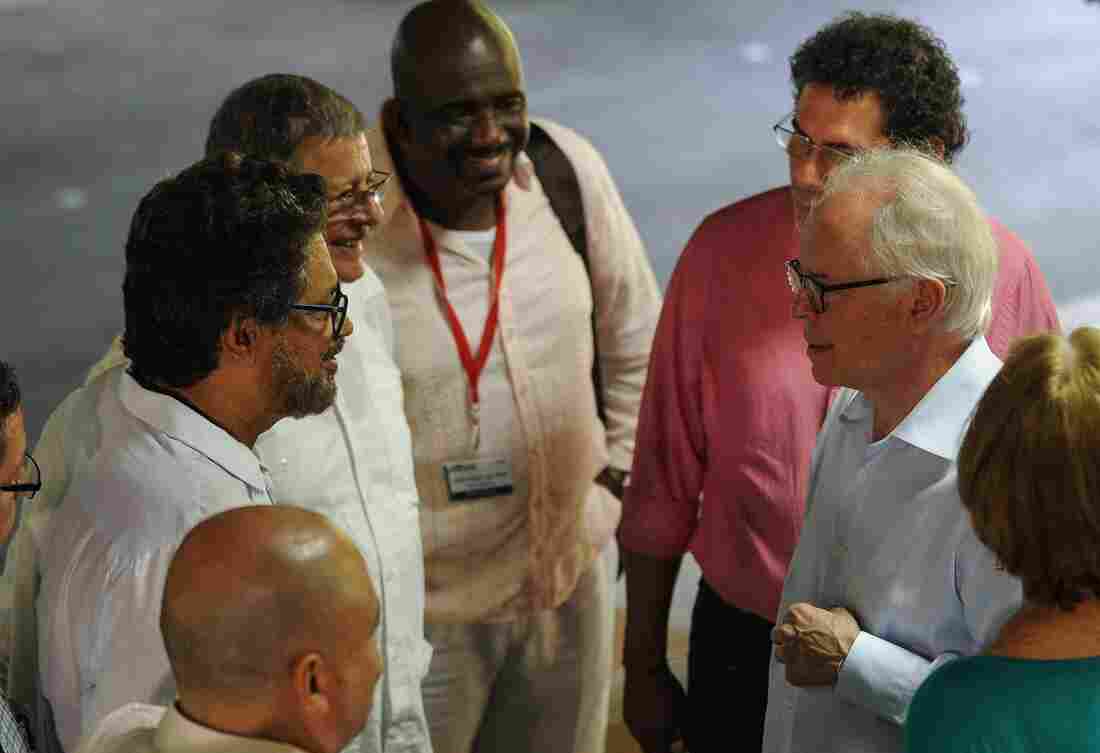 Aronson (on the right in white shirt) speaks with members of the FARC guerrillas during negotiations between the government and the rebels in Havana, Cuba, on Nov. 19, 2015. Yamil Lage/AFP/Getty Images hide caption 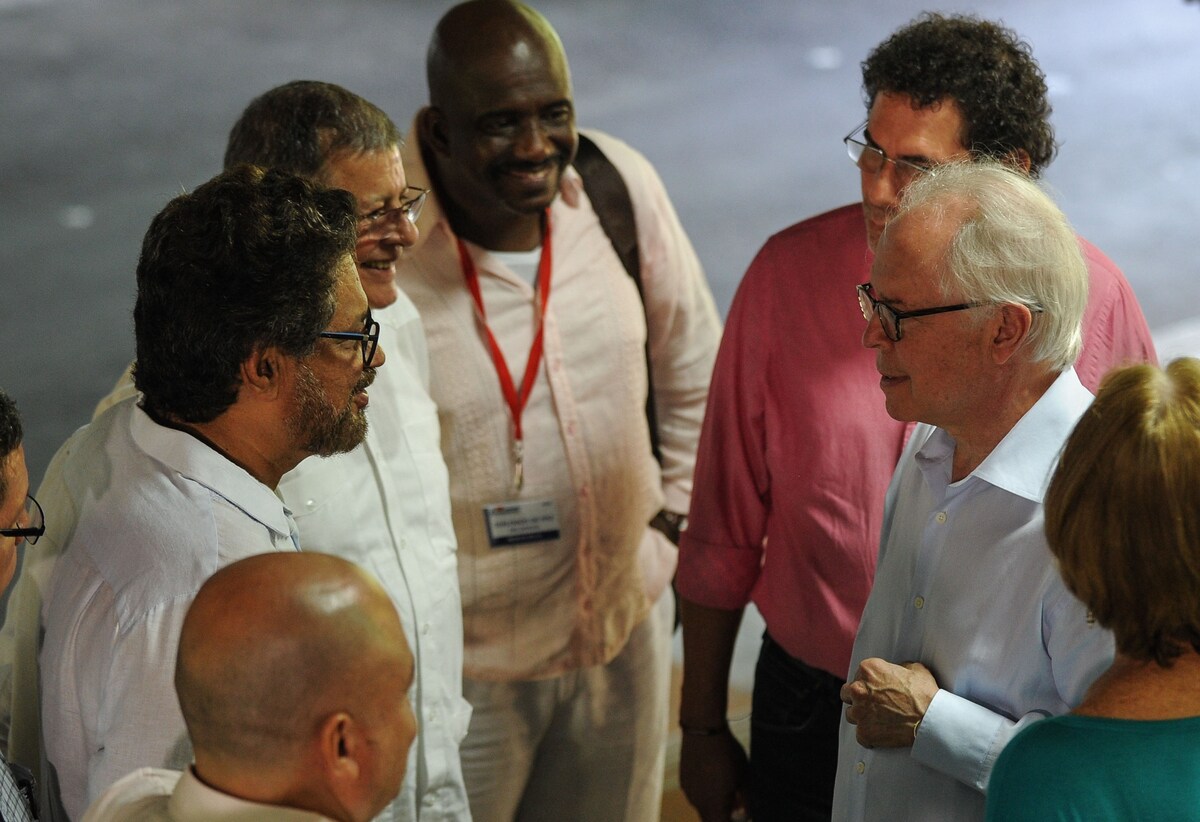 Aronson (on the right in white shirt) speaks with members of the FARC guerrillas during negotiations between the government and the rebels in Havana, Cuba, on Nov. 19, 2015.

Colombian President Juan Manuel Santos requested American involvement in the peace talks because the U.S. government had been deeply involved in the country's war.

Over the past 16 years, Washington has spent $10 billion on Colombia – much of it to boost the police and army in their fight against the rebels and the illegal drug trade.

Anticipating a frosty reception from the FARC's Marxist-Leninist commanders, Aronson tried a bit of humor. The guerrillas had invited Miss Universe – at the time the crown was held by a Colombian – to observe the peace talks. She declined just as Aronson, white-haired and 69, showed up in Havana.

"I looked them in eye and said: 'I know you were hoping for Miss Universe, but you're going to have to settle for me instead,'" Aronson recalled.

Besides providing huge sums of aid to the Colombian army, the U.S. government has extradited several FARC leaders and indicted many more on drug-trafficking charges.

But Aronson told the FARC that if its members got out of the cocaine trade, put down their guns and formed a legal political party, the U.S. government would no longer target them.

He also pointed out that in countries from Nicaragua to Brazil, leftist leaders and former guerrillas in recent years have come to power through the ballot box. In fact, El Salvador's president, Salvador Sánchez Cerén, is a former FMLN guerrilla commander who took part in the peace negotiations with Aronson 25 years ago.

"Before, the U.S. fanned the flames of war. But today, we believe that the U.S. commitment to the peace process will give it more strength," said Pastor Alape, a FARC commander who took part in the negotiations and often met with Aronson. 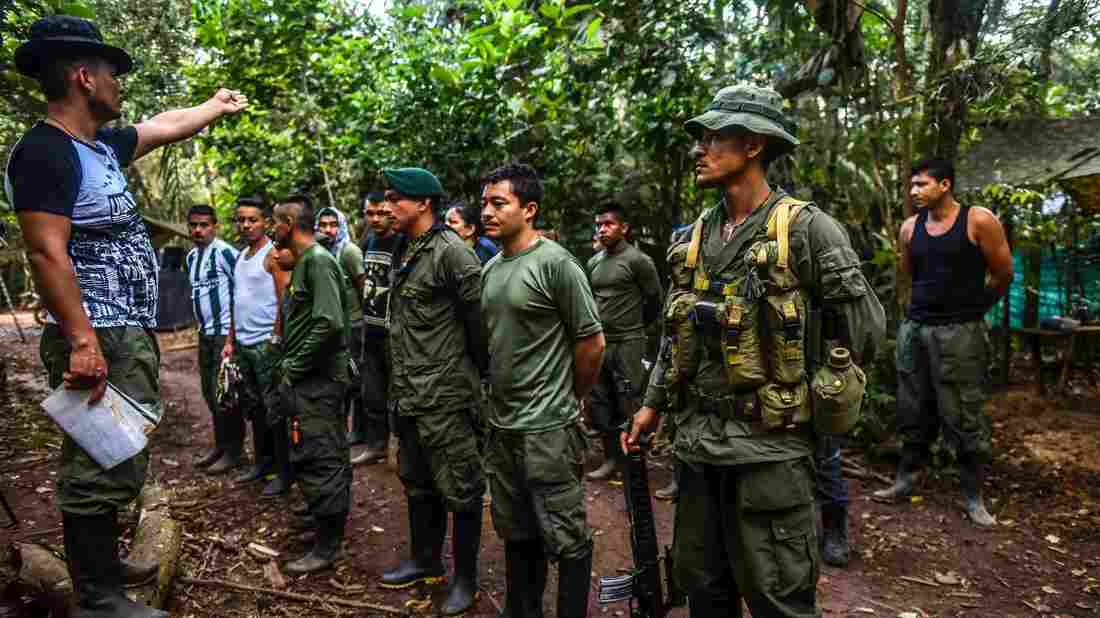 Members of the FARC guerrillas at a camp in Llanos del Yari, Colombia, on Thursday. After 52 years of armed conflict, FARC rebels are set to sign a peace agreement with the Colombian government on Monday. Luis Acosta/AFP/Getty Images hide caption 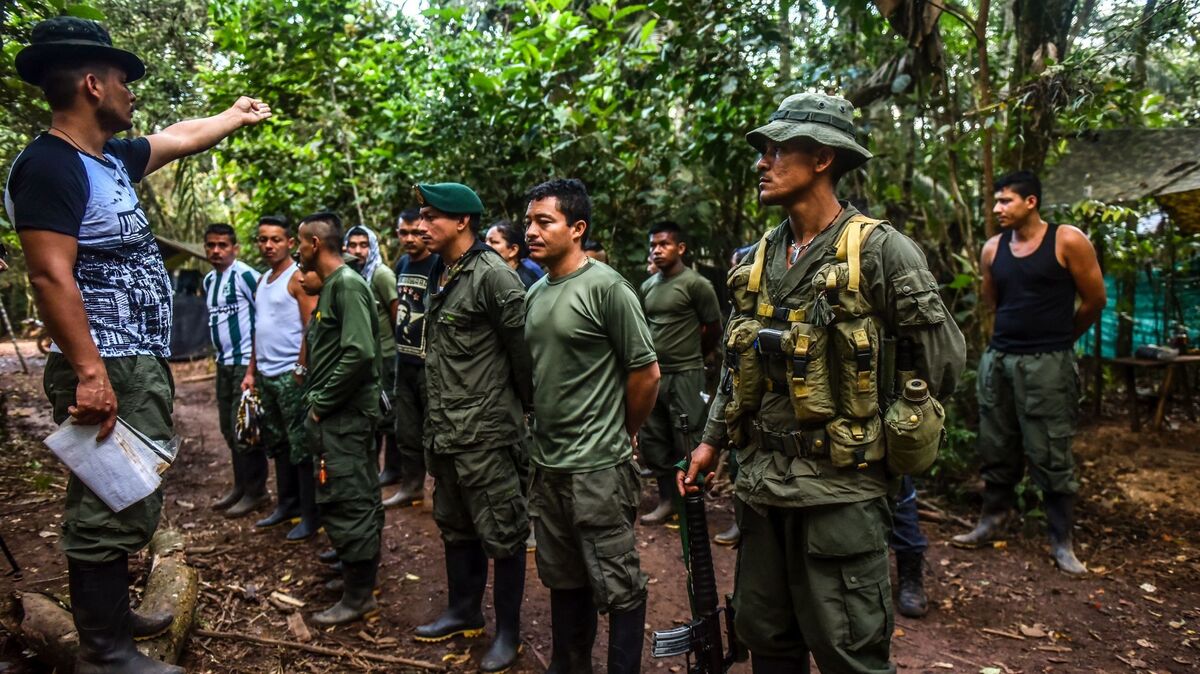 Members of the FARC guerrillas at a camp in Llanos del Yari, Colombia, on Thursday. After 52 years of armed conflict, FARC rebels are set to sign a peace agreement with the Colombian government on Monday.

Aronson traveled to Havana 24 times after taking up his role in February 2015 and was on hand during several crises. He said the worst came in April 2015 when the FARC broke a ceasefire by killing 11 soldiers. The army retaliated by taking out 70 rebels.

"That was when the war heated up again and it was ugly and dangerous," he said. "Both sides were blaming the other. And I think one more incident and we would have been back at war. Things were falling apart as we spoke."

Another sticking point was how to handle FARC rebels accused of grave human rights abuses. Aronson brought in Notre Dame law professor Douglass Cassel who, as part of a commission of human rights experts, helped forge a deal that will allow guerrillas to avoid prison if they tell the truth about their crimes.

In a recent interview with NPR, Santos expressed his gratitude.

"The personal participation of Bernie Aronson has been a great contribution, not only to the process but to me, personally," Santos said.

The two sides finally wrapped up the negotiations last month leading to Monday's signing ceremony in Colombia's the Caribbean resort city of Cartagena.

There are still a few hurdles left. In a referendum on Oct. 2, Colombians will vote to either approve or reject the peace deal. But if the "yes" vote wins, as nearly all polls predict, the FARC will then have six months to gather in zones around the country and turn in their weapons to U.N. inspectors.

After that, Colombia must deal with a much smaller guerrilla group called the National Liberation Army, or ELN, which has an estimated 1,500 troops. However both the Santos government and ELN commanders have voiced their intent to start peace negotiations.

"The FARC demobilizing takes wind out of the sails of the war," Aronson said. "I think the ELN will look around and see itself completely isolated. Nobody will support 1,500 guerrillas running around Colombia after they settle the war with the FARC."