Accessibility links
Shimon Peres, The Last Of Israel's Founding Leaders, Dies At 93 : Parallels Peres served as prime minister three times, launched the country's nuclear program and won the Nobel Peace Prize. But his grandest goal, an Israel at peace with its Arab neighbors, eluded him.

The last surviving leader of Israel's founding generation, Shimon Peres was a three-time prime minister, the architect of the country's secretive nuclear program and a winner of the Nobel Peace Prize for his efforts to make peace with the Palestinians.

Peres, who died Tuesday at 93 according to Israeli officials, was at the center of recurring Middle East dramas throughout his more than six decades of public life. Still in his mid-20s, Peres was put in charge of securing weapons for the main paramilitary in Israel's 1948 war of independence, and he remained in prominent roles until he stepped down as the country's president in 2014, at age 90.

In a remarkable career filled with great triumphs and bitter setbacks, he held more senior positions than any other Israeli, often at pivotal moments in the country's turbulent history. In addition to his tenures as president and prime minister, he served as foreign minister (three times), defense minister (twice), finance minister and transportation minister in Israel's ever-rotating coalition governments.

However, Peres was unable to obtain the prize he sought most: an Israel fully at peace with its Arab neighbors. And while Peres was celebrated internationally, he always struggled in Israeli elections, and many Palestinians felt his actions fell far short of his dovish proclamations.

Like many of Israel's founders, Peres' story began in a tiny Eastern European town. He was born Aug. 2, 1923, in Wiszniew, Poland, which is now Vishnyeva, Belarus. His family immigrated a decade later to what was then called Mandatory Palestine, under British rule.

In the first major Arab-Israeli war, in 1948, Peres played a key role in procuring arms for the Haganah, a militia that evolved into the Israeli military following the country's independence. Peres was rapidly promoted within the Defense Ministry, becoming director general several years later at age 29.

That made Peres a central figure during the 1956 Suez Canal crisis, when Israel, Britain and France joined forces in a bid to seize the crucial waterway from Egypt. While the military operation was a success, the political blowback from the U.S. and the Soviet Union forced those three countries to retreat and return the canal to Egypt.

This episode reflected Peres' more aggressive side during his younger years. Yossi Beilin, who would become a Peres ally and negotiate the secret Oslo Accord with the Palestinians in the 1990s, described Peres as "more hawkish than others" for decades.

Peres, meanwhile, would also make his mark as the man who developed Israel's nuclear program during the late 1950s.

"It was Shimon Peres who persuaded [Israel's first prime minister] David Ben-Gurion in 1956-57 that the time was right to initiate the nuclear project. From the beginning Peres was entrusted by Ben-Gurion to lead Israel's pursuit of a nuclear capability," wrote Avner Cohen, a leading authority on Israel's nuclear program.

Ben-Gurion and Peres believed a nuclear deterrent was crucial for the small, fledgling country surrounded by much larger Arab states. Peres rapidly built the program by working closely with France, a leading ally of Israel's at the time.

"Of all the countries engaged in nuclear research and development, only France might be prepared to help us," Peres would later write. "I believed, therefore, that all our diplomatic efforts should be focused on France."

Israel does not discuss details of its nuclear program to this day, but according to the CIA and others it is widely believed to have 100 or more nuclear weapons.

Throughout the 1960s, '70s and '80s, Peres moved from one top government job to another as coalition governments formed, fell apart and formed again. He was never far from the action whether it was a military, diplomatic or economic matter.

In the 1980s, Israel's economy crashed as inflation spiked to more than 400 percent a year. Peres negotiated with union leaders, major employers and central bank officials and forged deals to cut wages and freeze prices, moves that helped stabilize the economy. In the years that followed, he would be a leading advocate of the country's high-tech sector.

Peres first served as prime minister for just two months in 1977. He held the job again, from 1984-86, in an unusual arrangement brought on by a deadlocked election between his left-leaning Labor Party and the right-leaning Likud Party. Peres led the country for the first two years of a four-year term and was then replaced by the hawkish Yitzhak Shamir.

In 1987, the Palestinians launched an uprising, or intifada, that would last for six years. That was one of several developments, along with the Gulf War and the collapse of the Soviet Union in 1991, that led to a major international push to address the Israeli-Palestinian conflict.

The Israelis and Palestinians held secret negotiations in Oslo, Norway, and reached an interim deal that was signed on the White House lawn in 1993. With President Clinton presiding, Israel was represented by Prime Minister Yitzhak Rabin and Peres, then the foreign minister, and the Palestinians by their leader, Yasser Arafat.

The agreement called for talks to permanently end the conflict, and though that deal still needed to be negotiated, the three men were awarded the Nobel Peace Prize in 1994. 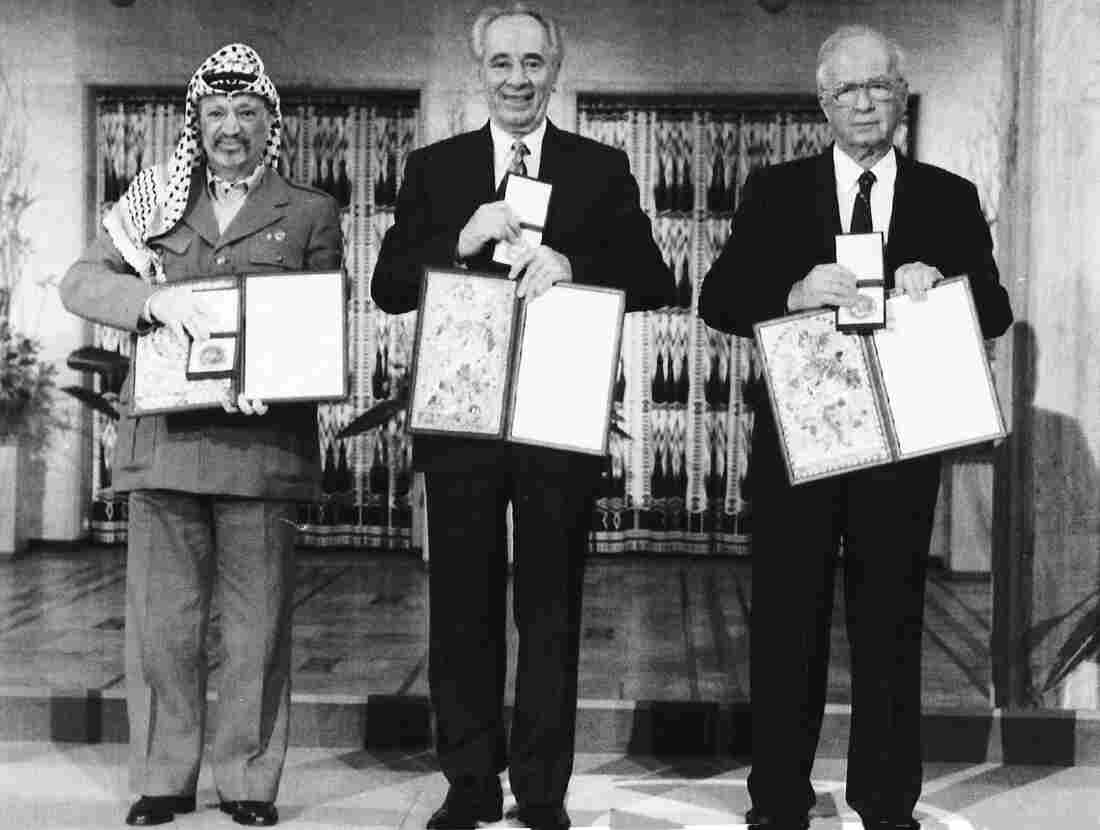 Palestinian leader Yasser Arafat (from left), Israeli Foreign Minister Shimon Peres and Israeli Prime Minister Yitzhak Rabin pose with their medals and diplomas after receiving the 1994 Nobel Peace Prize on Dec. 10, 1994. The three were awarded the prize for "for their efforts to create peace in the Middle East." AP hide caption 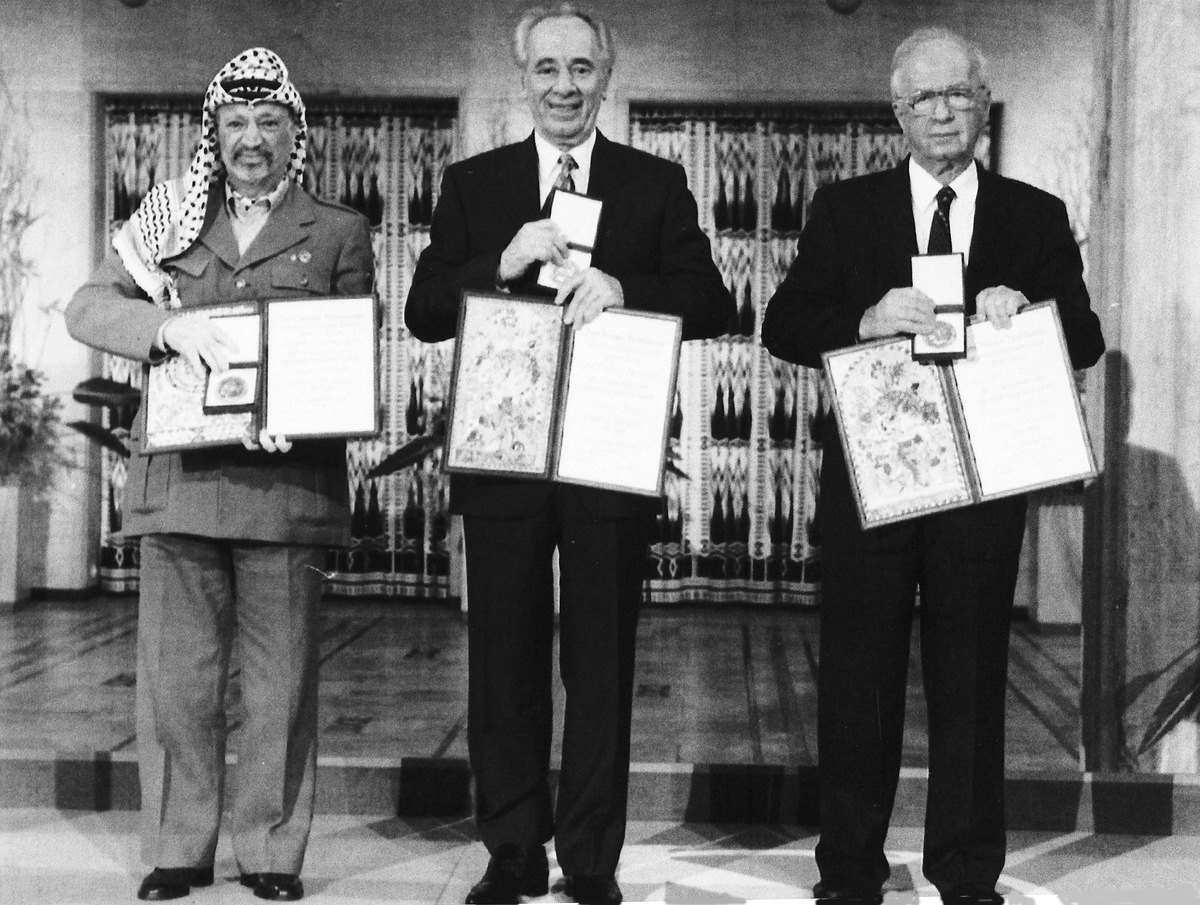 Palestinian leader Yasser Arafat (from left), Israeli Foreign Minister Shimon Peres and Israeli Prime Minister Yitzhak Rabin pose with their medals and diplomas after receiving the 1994 Nobel Peace Prize on Dec. 10, 1994. The three were awarded the prize for "for their efforts to create peace in the Middle East."

"Let us become a civic community," Peres said in his speech on the White House lawn. "Let us bid once and for all farewell to wars, to threats, to human misery. Let us bid farewell to enmity, and may there be no more victims on either side."

But it was not to be. The negotiations were fraught from the beginning. Rabin was assassinated by an Israeli ultra-nationalist in 1995. Peres took over as prime minister, but seven months later, he lost a tight election to the hawkish Benjamin Netanyahu and the peace talks largely stalled.

In 2000, the Palestinians launched a second uprising that would leave almost 1,000 Israelis and several thousand Palestinians dead over the next five years.

Peres issued repeated calls to revive negotiations, but he faced increasingly skeptical, if not outright hostile responses from both sides. He suffered repeated political bruises, said Collette Avital, who worked closely with him in the Foreign Ministry.

"He was the most hated man in Israel for many, many years. Nobody trusted him, nobody liked him, except a few of us," Avital said.

While many Israelis criticized him for pursuing peace talks, some Palestinians distrusted him as a peacemaker.

Abdullah Abdullah, a longtime Palestinian foreign affairs official, said many Arabs were killed during Peres' time in office. He recalled a 1996 fight between Israel and the Lebanese group Hezbollah. During that battle, the Israeli military fired artillery that killed more than 100 civilians taking shelter in a United Nations compound in southern Lebanon.

"Like makeup on an ugly face, he beautifies the face, the crimes of Israel," Abdullah said of Peres.

Peres served in the mostly ceremonial position of president from 2007 to 2014, and celebrated his 90th birthday while still in office. Beilin says that in that role, Peres became an elder statesman respected both at home and abroad, rising above the hurly-burly of daily politics.

"In a way, he became the father of the nation. Belatedly. He had been so controversial. And suddenly he became a consensus [builder]," said Beilin. "Which was really a prize he deserved after all these years."

President Obama said in a statement Wednesday that Peres "was guided by a vision of the human dignity and progress," and that he changed the course of history through his moral foundation and "unflagging optimism."

Peres suffered from a stroke two weeks ago and died Tuesday. His body will lie in state at Israel's parliament on Thursday, and his funeral will be held Friday.

President Obama, Prince Charles and Prime Minister Justin Trudeau of Canada, as well as other heads of state, will attend the funeral, Israel's Foreign Ministry says.