Accessibility links
Victims Of Turkey's Post-Coup Purge Invited To Prove Their Innocence : Parallels Even government supporters worry that that the sweeping crackdown may have resulted in too many arrests, suspensions and firings. New crisis centers are helping some find justice. 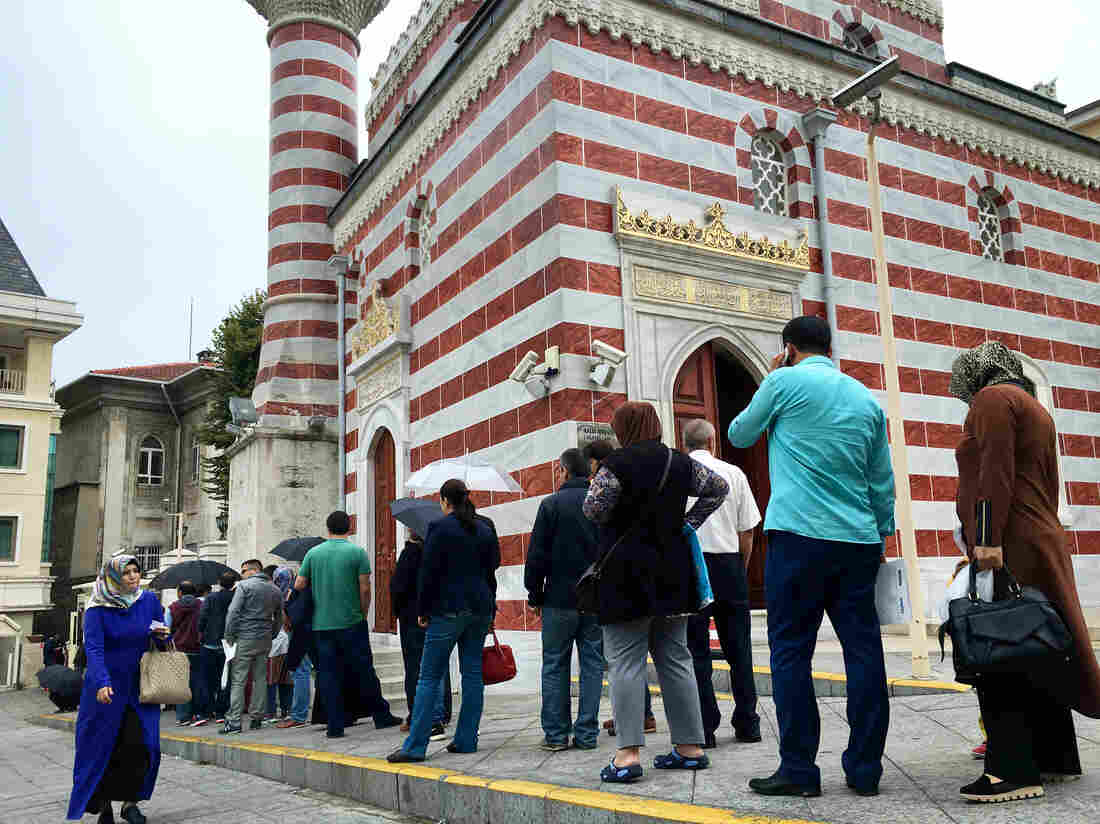 Turks line up outside the Istanbul governor's office, one of the "crisis management centers" set up for those who believe they were wrongly suspended, fired or arrested following the July 15 coup attempt. Gokce Saracoglu for NPR hide caption 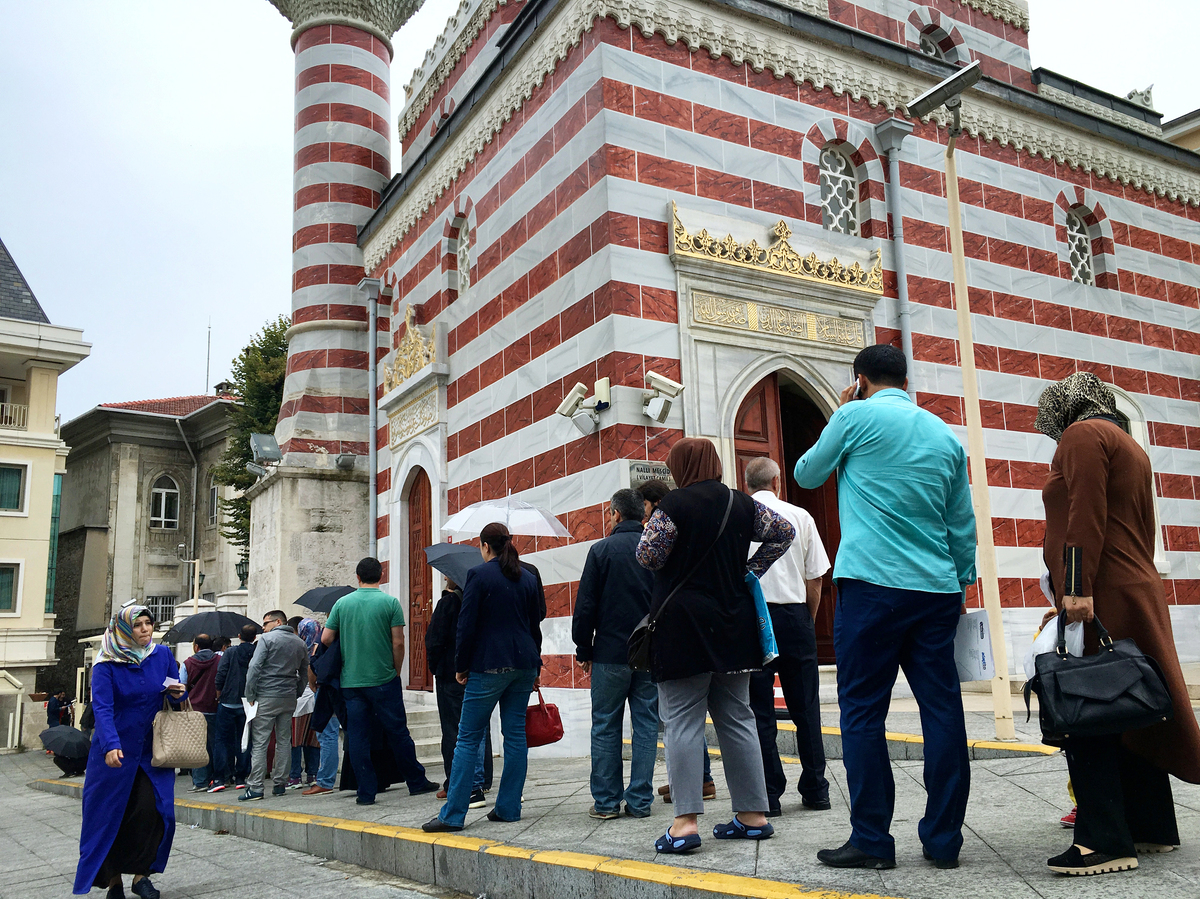 Turks line up outside the Istanbul governor's office, one of the "crisis management centers" set up for those who believe they were wrongly suspended, fired or arrested following the July 15 coup attempt.

Just up the hill from Istanbul's Old City, lines are forming outside the district governor's office. This is where Turks can find a new "crisis management center," where those caught up in the post-coup purge can finally be heard in their own defense – or in defense of a relative now behind bars. At a desk, people can submit their written defenses.

Since a failed coup attempt on July 15, more than 80,000 Turks have been suspended, sacked or arrested, and even Turkey's leaders are wondering if the purge has gone too far. Anyone who's been purged is eligible to seek justice at these new centers around the country.

A slight, elderly man named Necati takes a break at a sidewalk café while a relative holds his place in line. He asks that his last name not be used – his family can't afford to lose another income now that his son-in-law is in jail.

Necati says on the night of the coup, his policeman son-in-law was on the job, defending a government building against any takeover attempt. But he says instead of being rewarded as a patriot, a month later they came for him in the dead of night:

"He was on duty 50 hours straight the night of the coup. He fought on the side of the government, and they came to his house at 1:30 in the morning to drag him away in front of his terrified family," says Necati. "This is unjust. He never had anything to do with the Gulen movement or anything like that."

Necati is referring to Fetullah Gulen, the U.S.-based cleric whom Turkey accuses of orchestrating the coup. Gulen denies the charge. Necati hopes these crisis centers will reverse the mistake made in his son-in-law's case, though he's worried by something that happened during the first court hearing.

"When he was taken to court, after hearing the evidence, the judge actually decided he should be released," he says. "But then there was a five-minute break, and when the judge came back, they decided to arrest him. We don't know what happened in those five minutes."

How could so many be involved?

The sweeping purge has been in part made possible by a three-month state of emergency declared shortly after the failed coup. At the time, officials said it would be a one-time measure to give the government extraordinary powers not only to detain suspects but to enact measures by decree. Now, weeks before it's due to expire, there's a move to extend the state of emergency.

Turkey's National Security Council, at a meeting chaired by President Recep Tayyip Erdogan, recommended extending the state of emergency for another three months. After the meeting, Erdogan told an audience of local leaders that the state of emergency "is only for an effective counter-terrorism," according to the state run Anatolia News Agency.

Ever since the massive purge began, Turks have been wondering how so many people could have been in on a coup that was so secret everyone missed it. With the number of those purged still climbing, even Turkey's leaders have begun to speak about things getting out of hand.

Prime Minister Binali Yildirim says if there are any "miscalculations," as he put it, they will be re-examined and any mistakes corrected. These crisis centers appear to be part of that effort.

Even Erdogan, seen as the driving force behind the purge, has complained that people who had nothing to do with the attempted coup are being vilified in the media.

Investigators have seized on certain actions as evidence of complicity – such as using the ByLock digital messaging app, the same encryption software allegedly used by coup plotters. They have rounded up others for dealing with Bank Asya, one of Turkey's larger banks that was seized after being linked to the Gulen movement.

The most heavily purged sector is not Turkey's military, which attempted the coup, but educators. At a recent teachers' rally in Ankara, academic Hakan Kocak said the emergency decree that enabled the roundup of some 27,000 teachers borders on the absurd.

"Some people you don't know decide you are part of an organization you also don't know. They discover a link they can't explain and you lose your job overnight," he said.

Teachers' union official Adil Tasatan says the government is right to try to prevent future coups, but this sweeping purge of teachers is turning a basic principle of justice on its head.

"These crisis centers are a joke," he says. "These people have been declared guilty right off the bat, and now they're being told they have to prove their innocence. That's not how justice should work."

The government is promising to use "extreme care" – including throwing out all anonymous accusations – but the purge continues. Dozens more members of the judiciary and the intelligence service were dismissed this week.