Accessibility links
Along Germany's Coast, A Nazi Resort Becomes An Upscale Destination : Parallels One of the biggest Nazi relics, a massive beachfront indoctrination camp on the Baltic Sea, has been transformed into condominiums and a luxury tourist resort. It's causing a stir. 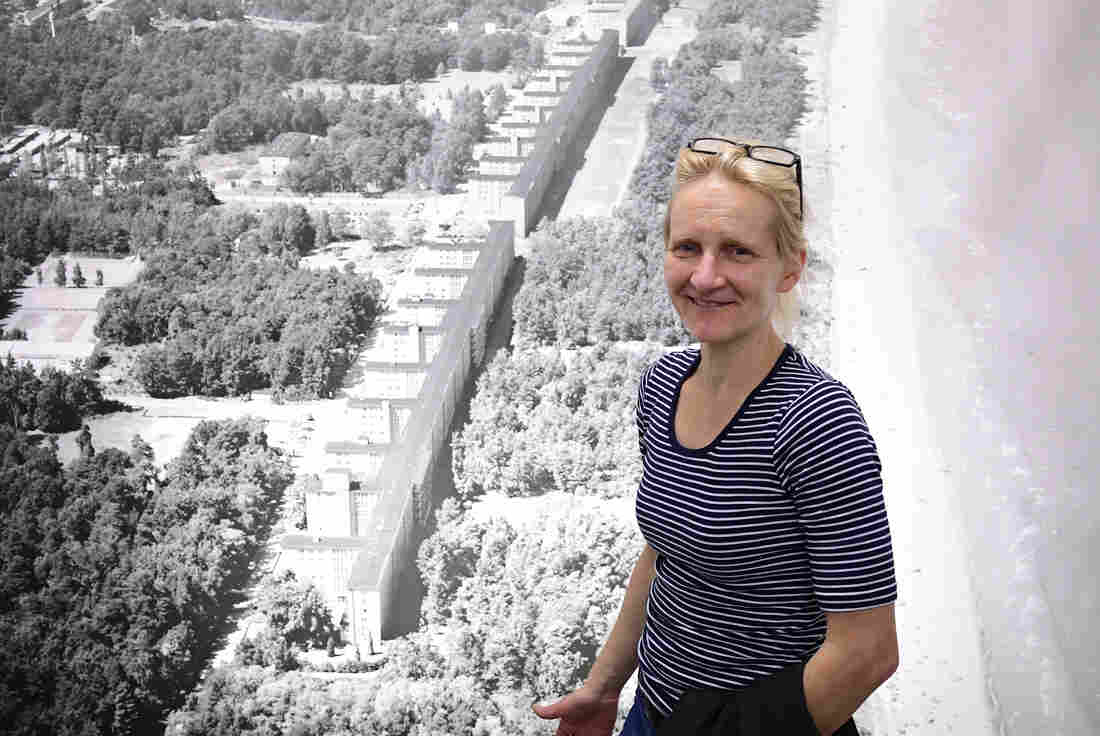 Katja Lucke, chief historian of the Prora resort complex on the German island of Ruegen, worries that redevelopment of the site as an upscale holiday destination glosses over a dangerous part of German history that shouldn't be forgotten. The Nazis built the complex in the 1930s, but abandoned it during World War II. Tobias Schwarz/AFP/Getty Images hide caption 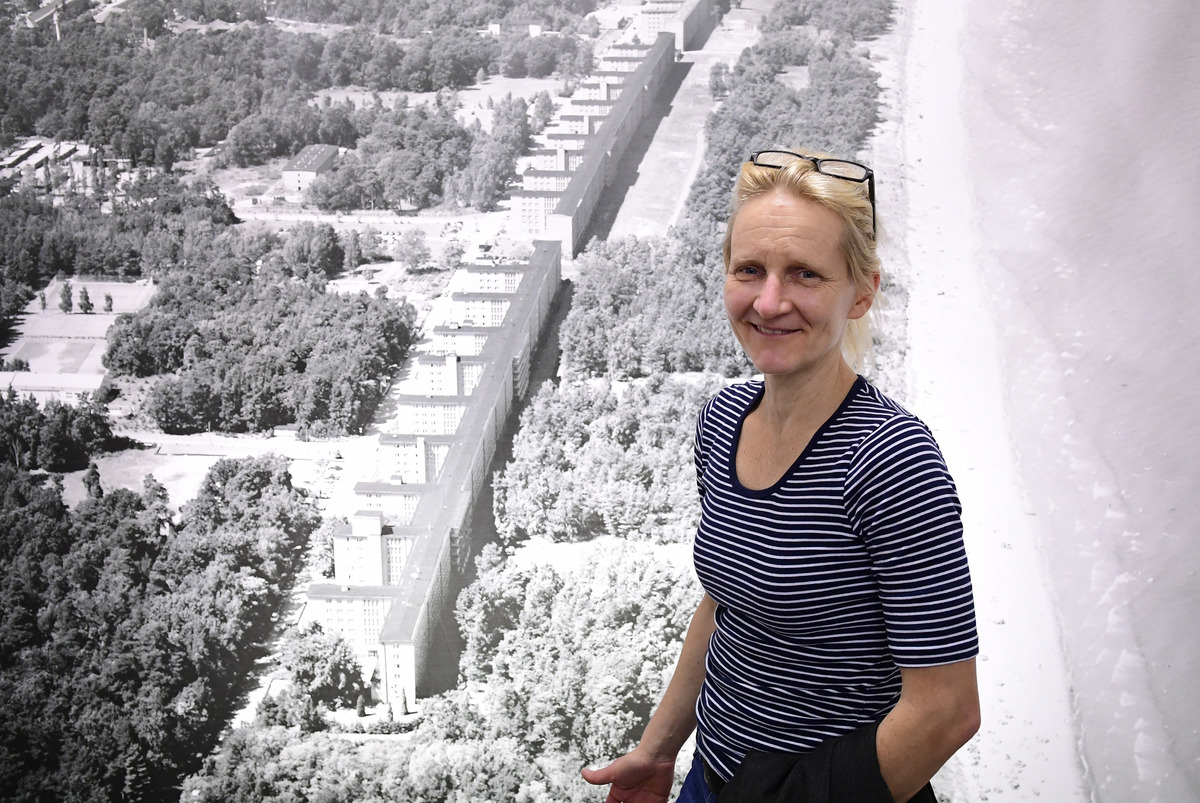 Katja Lucke, chief historian of the Prora resort complex on the German island of Ruegen, worries that redevelopment of the site as an upscale holiday destination glosses over a dangerous part of German history that shouldn't be forgotten. The Nazis built the complex in the 1930s, but abandoned it during World War II.

Architecture was one of Adolf Hitler's passions, and he commissioned hundreds of buildings and arenas reminiscent of imperial Rome to inspire and intimidate.

It's a legacy Germany has struggled to erase by re-purposing or razing Nazi-era structures. The Federal Office for Migration and Refugees, for example, was placed in an old SS barracks in Nuremburg, while the German Finance Ministry took over the Nazi aviation building in Berlin.

The Berlin bunker where Hitler spent his final days was reduced to a parking lot.

Usually there's little or no complaint about these refurbishments. But one government-sanctioned plan for a Third Reich landmark is sparking a public outcry — a commercial exploitation of the biggest Nazi relic on the Baltic Sea coast.

It's a resort Hitler built between 1936 and 1939 along sandy, white beaches for working-class Germans, one that was grandiose even by Nazi standards. Concrete dormitories that are six-stories high and 550-yards wide were erected side by side over 2.8 miles of pristine coastline on the northern island of Ruegen.

The cornerstone of the Prora resort was laid 80 years ago by then-Labor Front Chairman Robert Ley, who called it "a monument to the German people" and predicted it would still be standing 1,000 years later. The resort was owned and run by the Nazis' Kraft Durch Freude or "Strength Through Joy" leisure movement, a state-run organization designed to promote the advantages of National Socialism to the German working class. 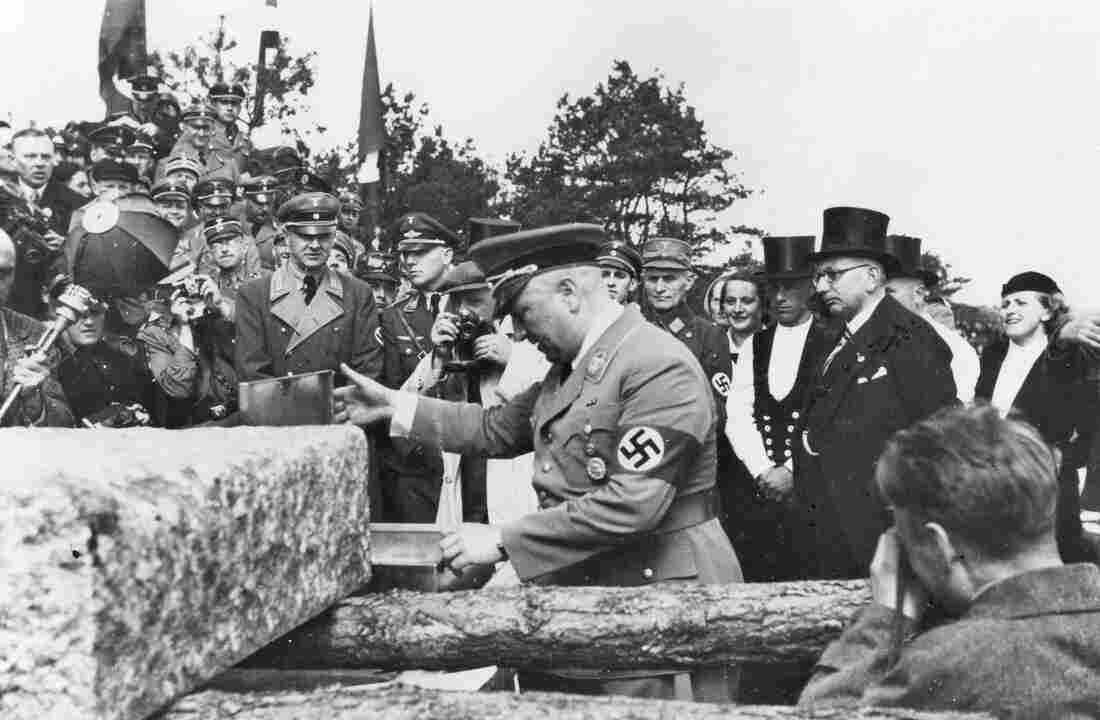 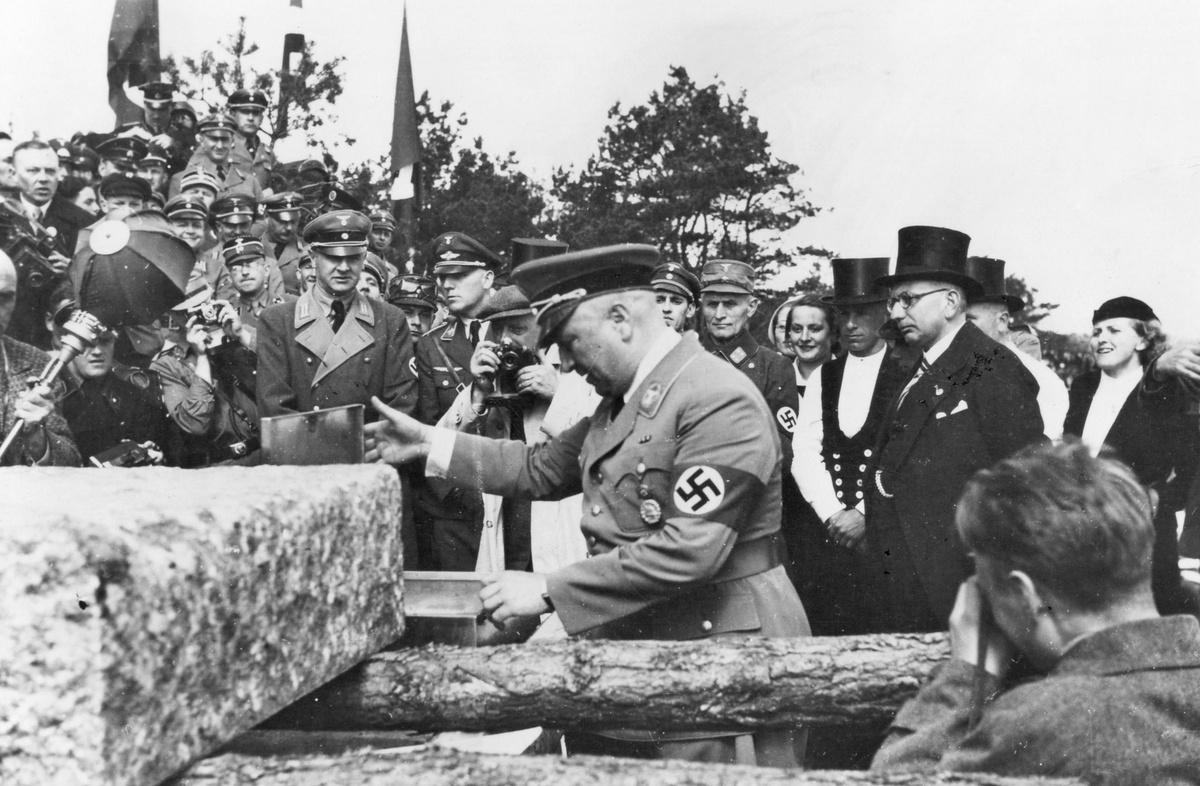 But the sprawling retreat that was meant to house and indoctrinate up to 20,000 people in National Socialism — each for less than $9 a day — never actually opened because of the impending war, says Katja Lucke, co-director of the Documentation Center, a museum at the site that details the resort's Nazi history.

She recounts how the Soviets later blew up one of the buildings and the East Germans turned what was left into a secret military compound that wasn't listed on public maps.

Following the collapse of Communism and German reunification, the resort became a ruin, overgrown with trees and mired in debate.

Busch and several other developers decided the answer was a little bit of both. They persuaded federal and local officials to waive historic preservation rules and allow them to build upscale condominiums and a luxury hotel and spa within the existing foundations. But one concession they insisted on was allowing controversial changes like adding balconies and rooftop terraces to the exteriors, even though changes are not normally permitted to the original design of historic landmarks. 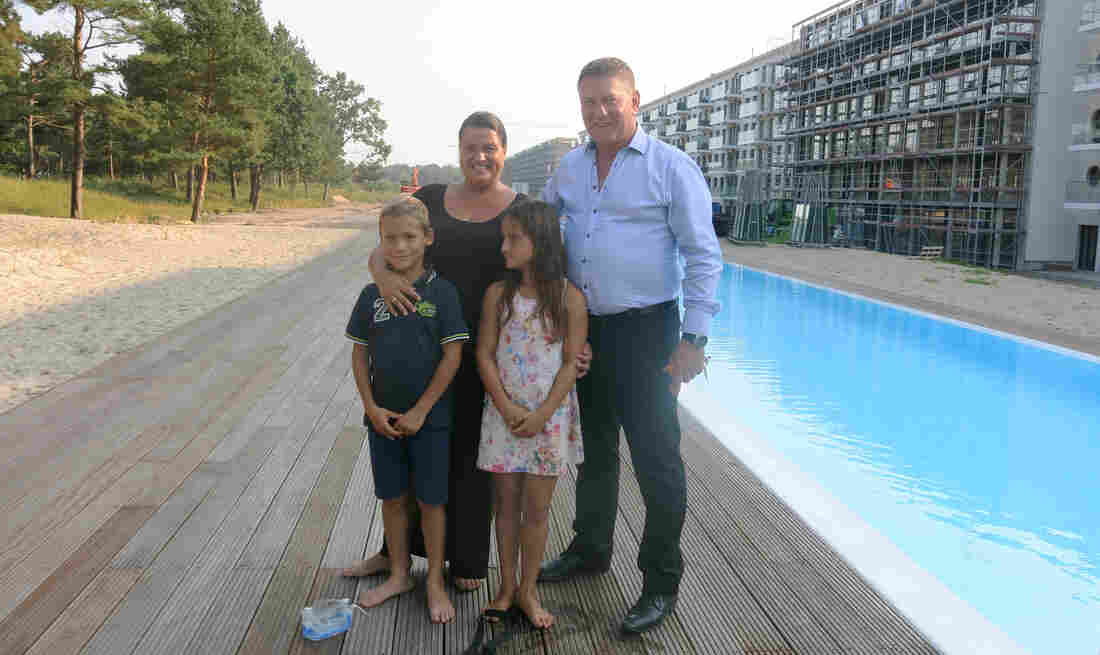 Peter and Yvett Sadewasser and their 8-year-old twins, Alexander and Josefina, were among the first families to move into one of the refurbished units. Soraya Sarhaddi Nelson/NPR hide caption 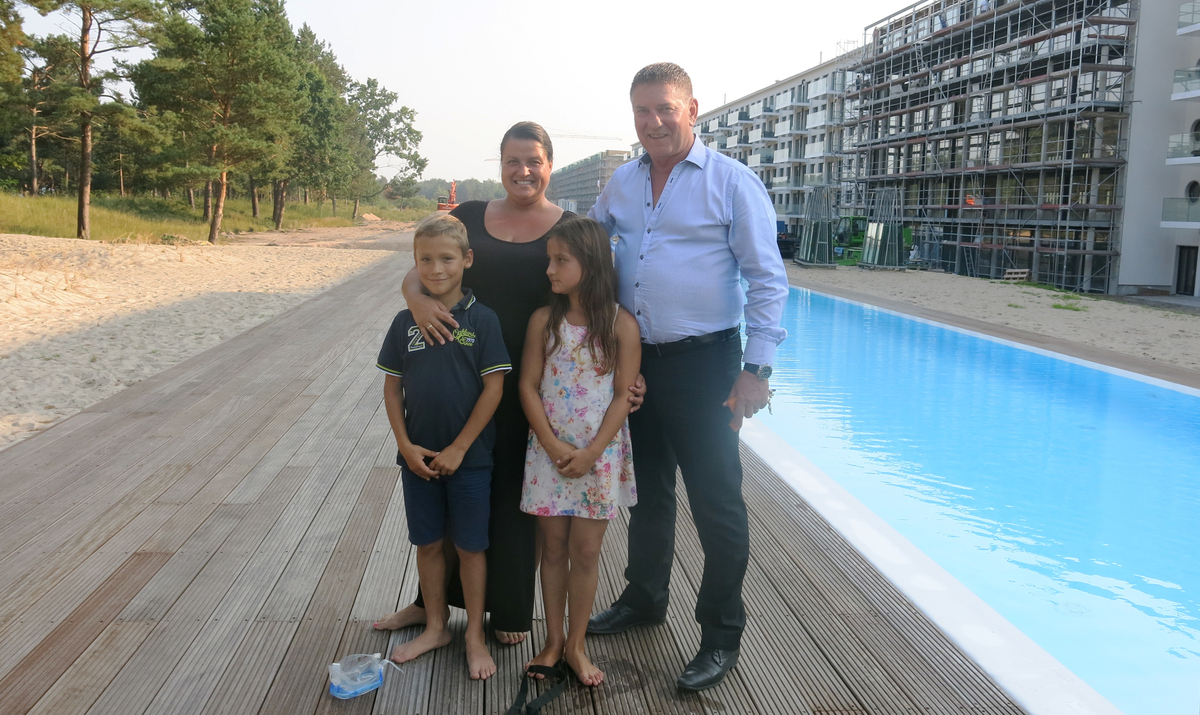 Peter and Yvett Sadewasser and their 8-year-old twins, Alexander and Josefina, were among the first families to move into one of the refurbished units.

Nowadays, the sound of waves is drowned out by construction helping the former Nazi site "turn into a butterfly," as nearby billboards advertise. Busch has opened a hotel called Prora Solitaire in one of the buildings, which also includes 150 individually owned condominiums.

Busch says even in its unfinished state, the hotel boasted an 89 percent occupancy rate this past summer. The resort, he says, appeals to Germans curious about the Nazi past and those seeking to vacation closer to home, following recent terrorist attacks elsewhere in Europe.

The condos are also being snapped up, Busch says, with buyers getting huge tax breaks because of the complex's historic designation. They come from as far away as Dubai and pay as much as $700 per square foot, he says.

He calls the new project "the best answer for the old and ugly and horrible thinking and spirit of the Nazi time."

Yvett Sadewasser agrees. She and her husband and 8-year-old twins were among the first families to buy a condominium here. She says she became fascinated with the Prora site after she first visited as a little girl from the neighboring town of Binz. Her mother, a teacher, had rare access to what was then the East German military complex because some of the officers' children were in her class.

Today, the Sadewassers live in a modern, two-story home with exposed concrete and steel from the original Nazi structure. The dwelling appeals not only to the adults, but also to their children, Alexander and Josefina. Their mother says they love being close to the beach and having access to the building's fancy pool. 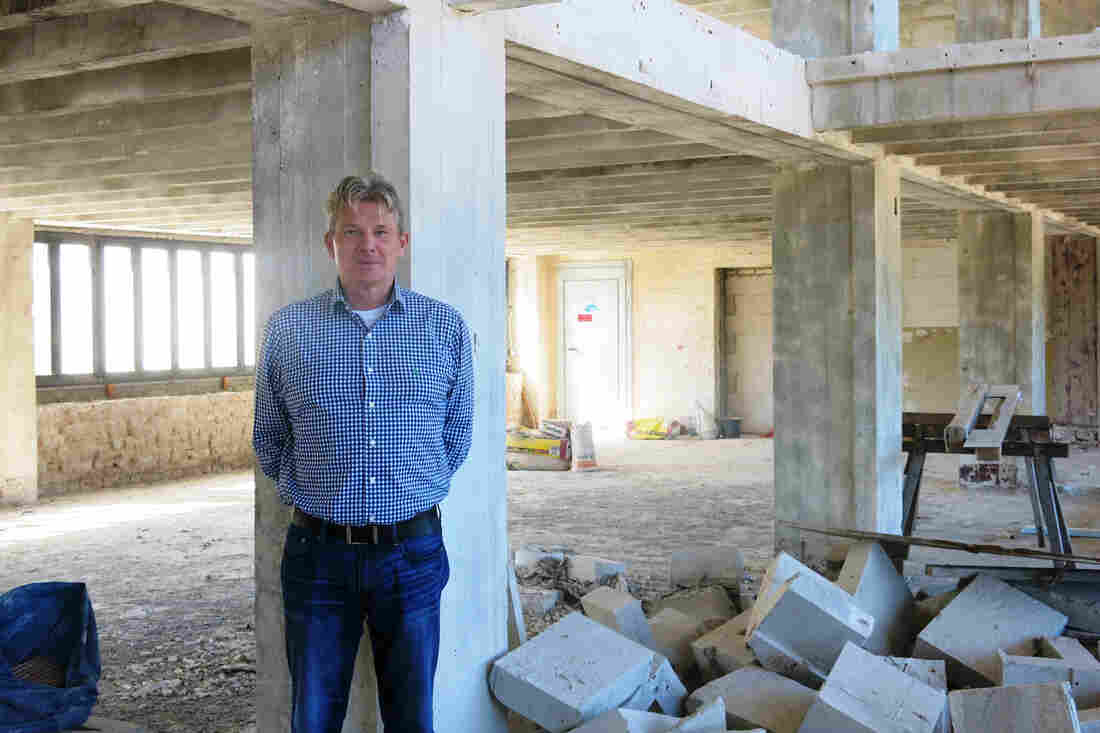 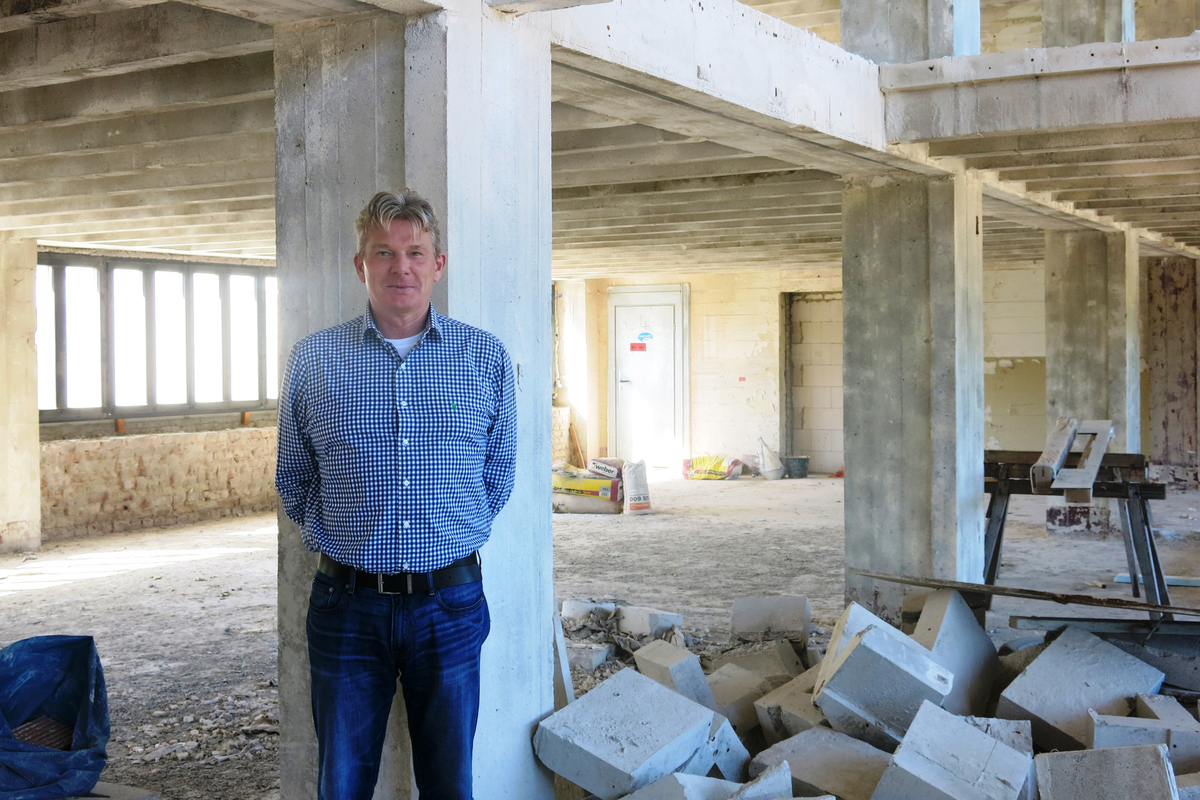 Developer Ernst Ulrich Busch says the former solarium is his favorite spot in the former "Strength Through Joy" building he's refurbishing. He plans to convert the solarium into two-story apartments.

"I'm also interested in the history," Alexander tells me.

He hesitates, then whispers: "Adolf Hitler." He quickly puts his hand over his mouth as if he's said a dirty word.

"He was a bad man," Alexander says.

"That's why we don't like to say his name," says Josefina.

Awareness of the site's grim history is something museum director Lucke and other critics of the project believe will dissipate with the conversion. Many historians and some former residents of the site during East German times feel it glosses over a dangerous part of German history that shouldn't be forgotten.

"There is no importance placed anymore on making it recognizable [as a Nazi landmark] even though it's designated a monument," Lucke says. These days, she says, "You can drink a latte macchiato there and slip next door into the sauna. I don't have anything against that, but you aren't really getting the context of this place."

Her museum, which had 60,000 visitors last year, is being evicted from one of the more central buildings in the complex, although the developers have pledged to provide a space for it in another structure at the far end.

Stefan Wolter, a historian and one-time East German Bausoldat or "construction soldier" stationed at the Prora site during the Communist era, fears the new complex will erode what little recognition there is today of East German abuses committed at the site. "What we went through was comparable to forced labor," he recalls. The construction soldiers were conscientious objectors pressed into labor by the Communist regime.

But Prora Mayor Karsten Schneider says he's cautiously optimistic that the development will turn out to be a good thing for local communities and that he's badgering investors to build not only vacation homes but also permanent housing, along with shops, businesses and other support services to accommodate the new project.

"We are on a good path and I hope it will continue," he said. "But ask me in five years, when they are done with the renovation."