Accessibility links
He Did It Again: Philippine President Keeps Insulting The U.S. (And Obama) : Parallels Rodrigo Duterte's repeated provocative statements are straining relations with the U.S. And his disparaging remarks about the U.S. president aren't helping Obama's pivot to Asia. 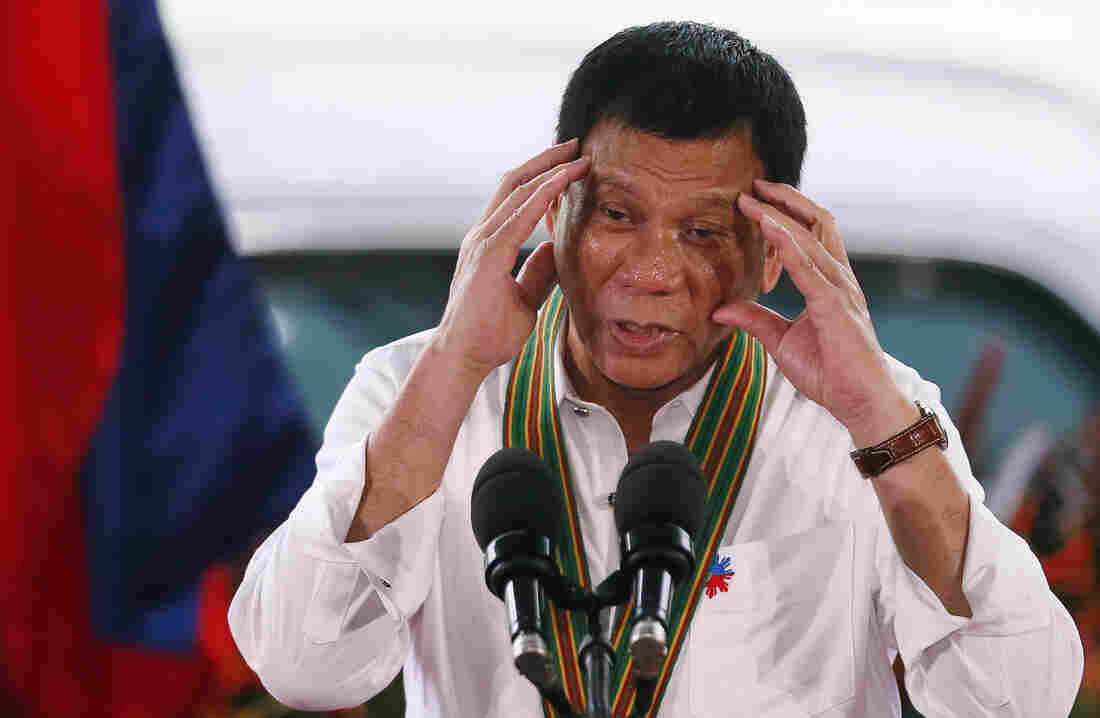 Philippine President Rodrigo Duterte addresses army troops near Manila on Tuesday. As the U.S. and the Philippines began annual military exercises, the president said it might be for the last time, adding that, "Mr. Obama, you can go to hell." Bullit Marquez/AP hide caption 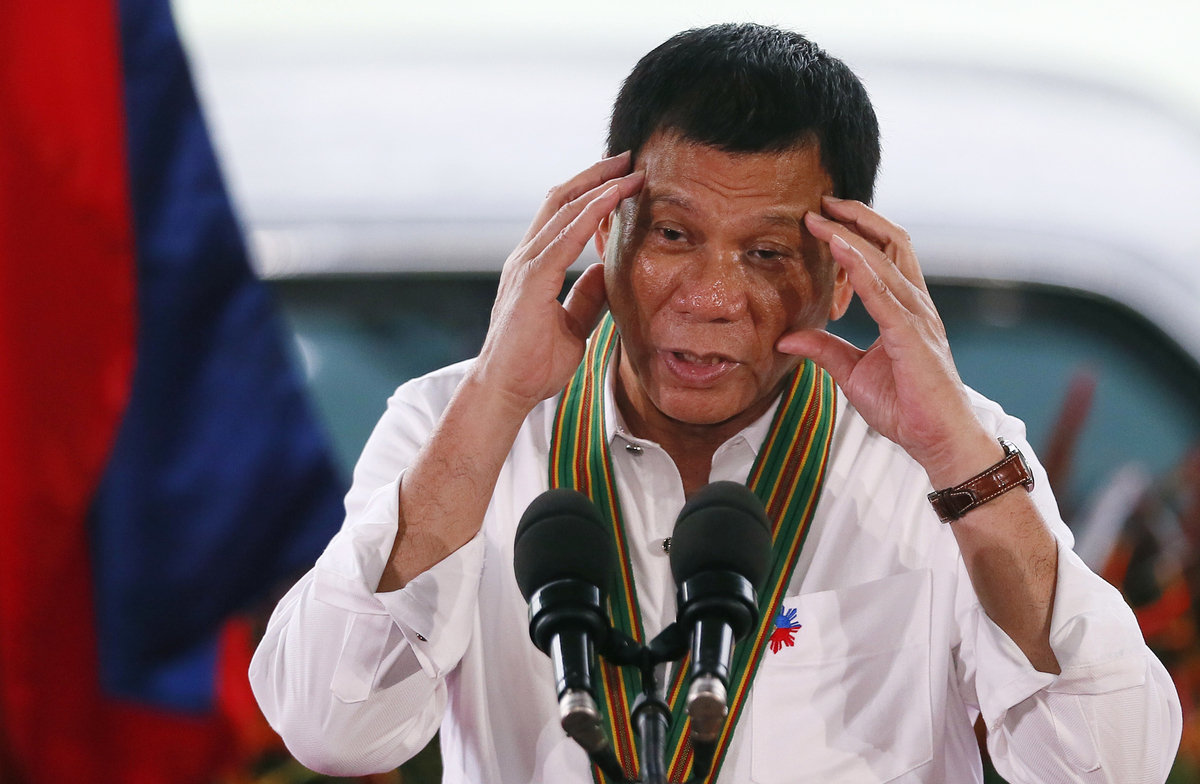 Philippine President Rodrigo Duterte addresses army troops near Manila on Tuesday. As the U.S. and the Philippines began annual military exercises, the president said it might be for the last time, adding that, "Mr. Obama, you can go to hell."

The U.S. and the Philippines are long-standing allies, but you would never know it from the way President Rodrigo Duterte is talking these days.

Since his election in June, Duterte has been unleashing anti-American rhetoric, which has included demands that the U.S. withdraw special operations forces helping to fight Islamists in the southern Philippines. He has also threatened to cancel joint naval patrols and warns this will be the last year the two countries will hold joint military exercises, saying they haven't benefited the Philippines.

And in separate remarks the same day, Duterte made a separate threat: "Eventually I might, in my time, I will break up with America." Then he added: "I would rather go to Russia and to China."

This was not the first time but only the most recent time that he has publicly insulted the U.S. president.

"We knew he was brash. We knew he was bold and spoke off the cuff, but I don't think anyone expected him to call the president of the United States a 'son of a bitch,' " says Jeff Smith, the director of Asian Security Programs at the American Foreign Policy Council.

Jonah Blank, an Asia analyst at the Rand Corp., says Duterte often will back off from those statements shortly after he makes them.

"There is no filter for Duterte. Whatever he happens to be feeling at any moment comes right out of his mouth," says Blank, noting this is not the way political leaders typically function. "So the U.S. has to try to figure out — is this policy or is this just a rash statement?" 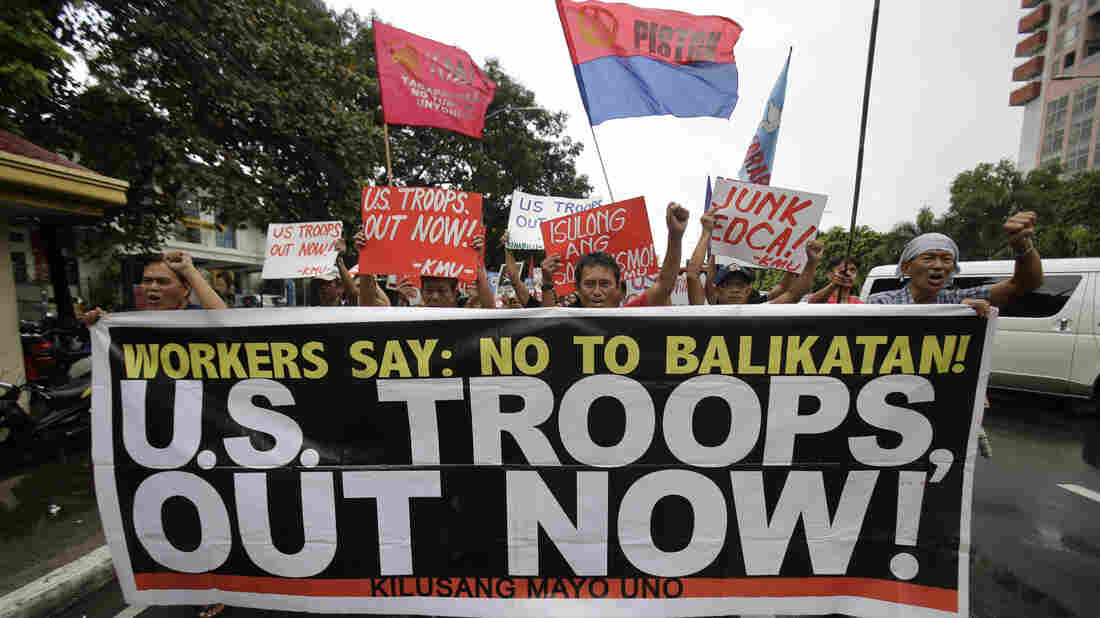 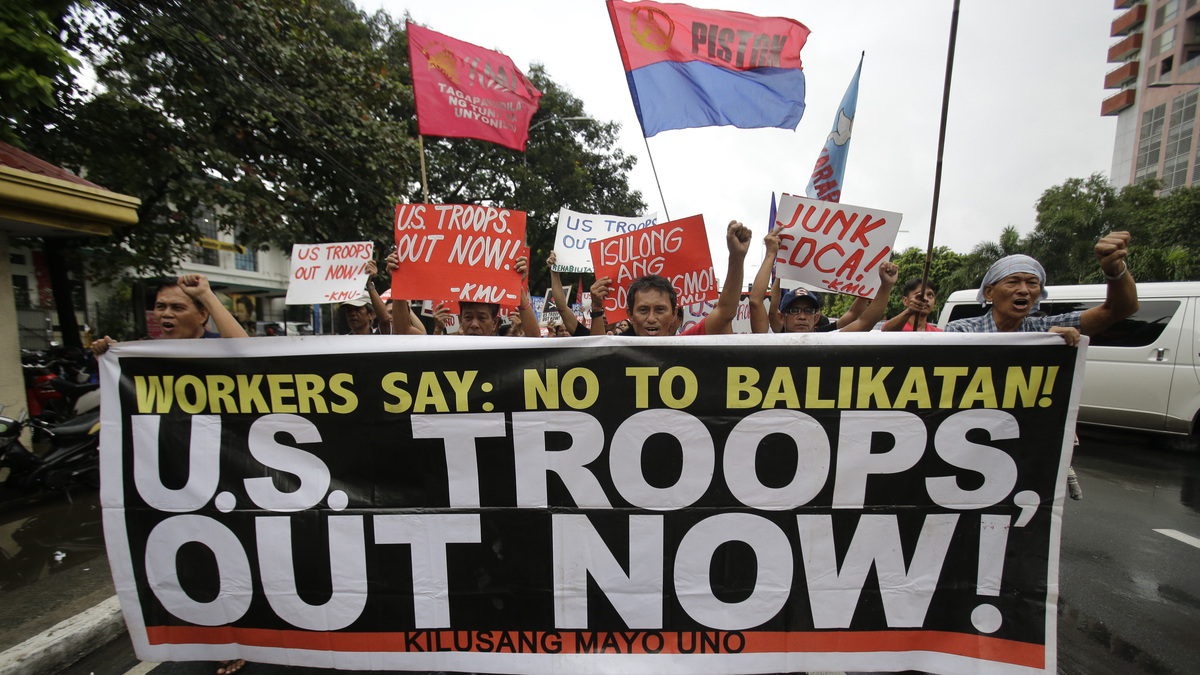 Filipino activists rally against U.S.-Philippine military exercises in a protest Tuesday outside the U.S. Embassy in Manila.

The U.S. isn't taking a position on the overlapping claims but saw the July decision as a way to push back against Beijing's increasingly aggressive behavior in the South China Sea, says Smith.

"I know the Obama administration had hoped to leverage the decision, which really was a resounding defeat for China, toward resolving these disputes by laws and norms, rather than by force," he says.

Smith says Duterte's outbursts threaten to undermine a key strategy for the Obama administration: the so-called pivot to Asia. This is meant to build up security and diplomatic relations with Asian partners, especially with a resurgent China laying claim to most of the South China Sea.

The Philippines is an important player in the pivot strategy, Smith says.

"To have Duterte do a 180 and essentially move the Philippines out of the U.S. camp and toward China really shakes up the regional order, I think in ways that are unfavorable to U.S. interests," he says.

Duterte is angry at U.S. criticism of his violent anti-drug campaign, which has left more than 3,000 drug suspects dead, says Vikram Singh, a former Pentagon official in charge of defense relations with the Philippines and other Southeast Asian nations. Singh says Duterte's rhetoric also feeds into a resentment many Filipinos have about U.S. rule in the Philippines during the first half of the 20th century.

"I think he's trying to demonstrate that he's an independent and strong leader by his willingness to stand up even to the United States," he says.

But what works at home doesn't necessarily work on the world stage, says Smith.

"He doesn't understand the importance of words and how much a president's speech and language can affect the trajectory of the long-term alliance," he says. He notes that Duterte's brash actions are potentially very destructive to the interests of the Philippines.

The question is, what can the U.S. do about an important but volatile leader?

"One of the things that the U.S. is trying to do is trying not to get caught up in this cycle of policymaking by pique," says Rand's Blank. "So every time Duterte says something provocative, not simply jumping in and assuming that it's going to be translated to policy."

Still, despite Duterte's actions, Singh, the former Pentagon official, says relations between the U.S. and the Philippines are very strong

"The government relationships at every level — economic, military — people who care about U.S.-Philippine relations are probably all very worried, and they're all talking to each other," he says. But, he adds, "The good thing is those relationships are what you sort of see through a bad period."