Accessibility links
Replicas Of Artifacts Destroyed By ISIS 'Rising From Destruction' In Rome : Parallels An exhibit at the Colosseum features life-size reconstructions of ancient works that ISIS damaged or destroyed in Iraq and Syria. "It is a universal heritage," says curator Francesco Rutelli. 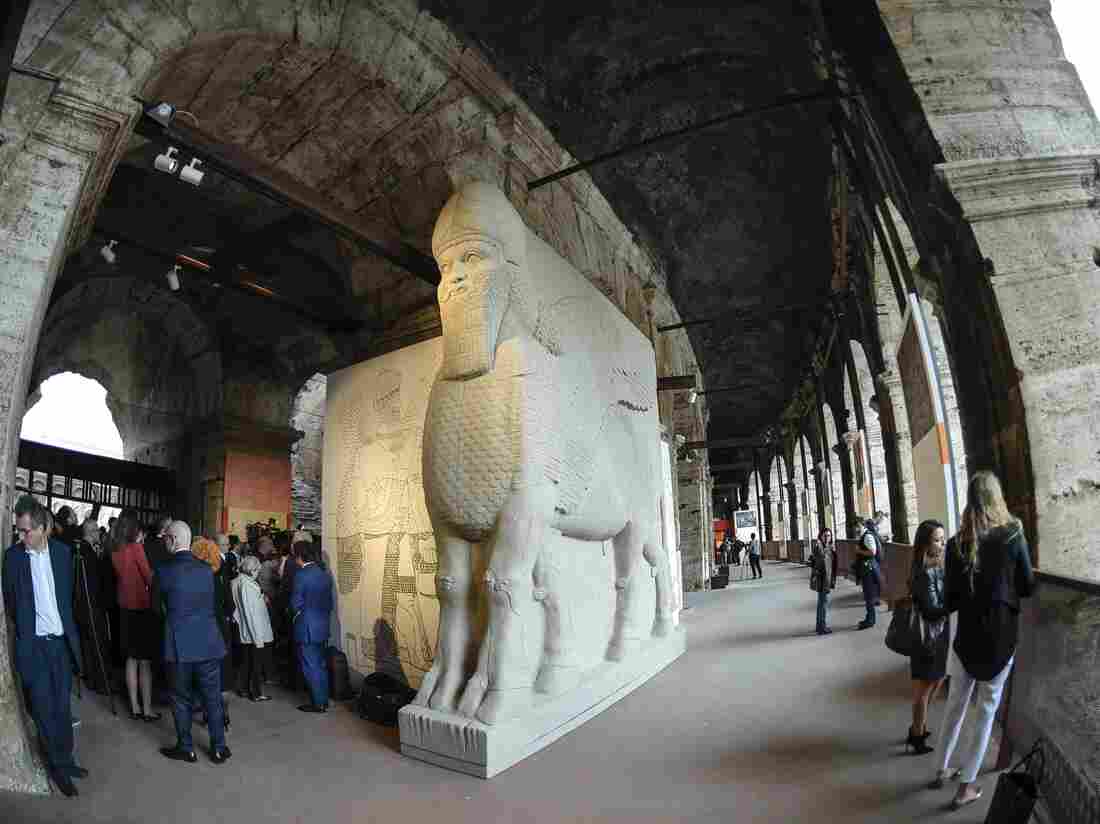 People walk past a replica of an ancient statue of a human-headed winged bull from Nimrud, Iraq, destroyed by the Islamic State. It's part of an exhibition called "Rising from Destruction" at Rome's Colosseum. Andreas Solaro/AFP/Getty Images hide caption 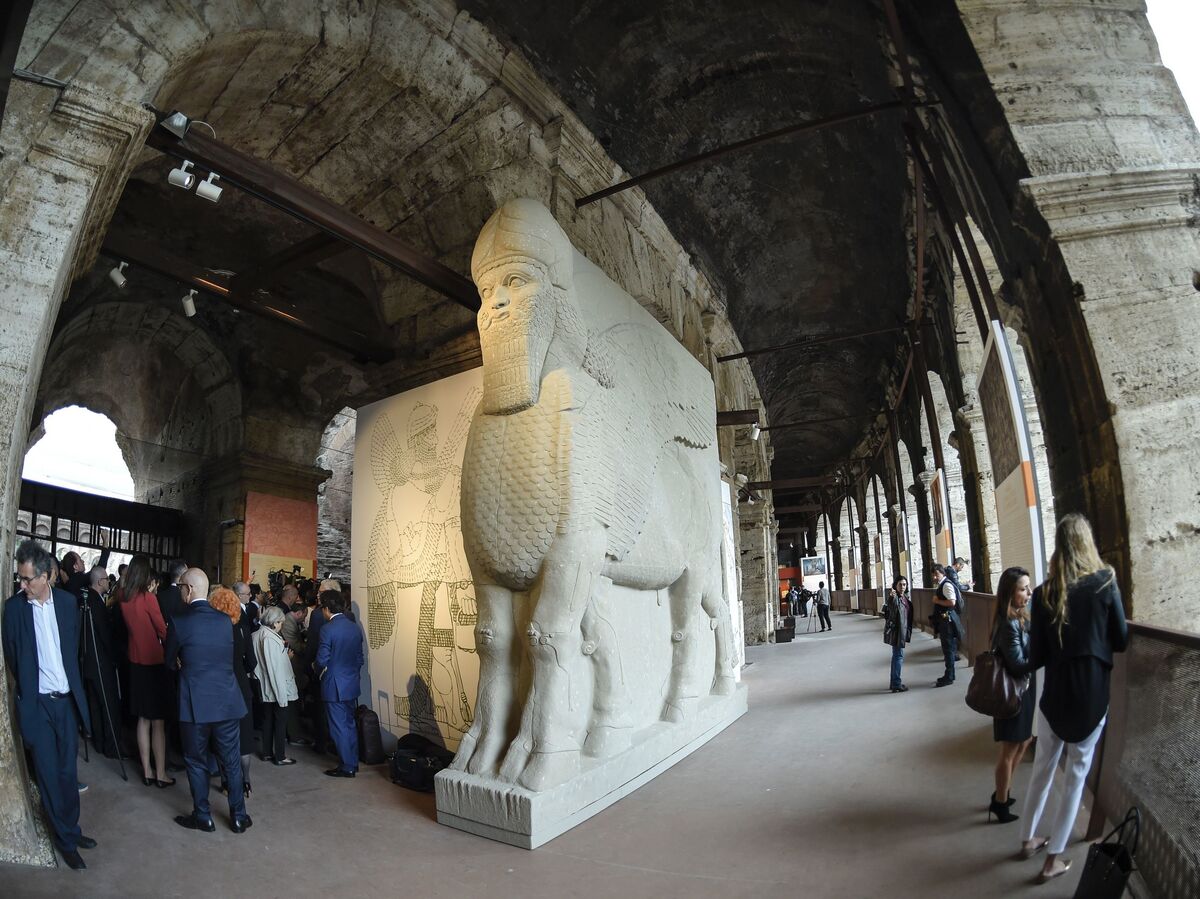 People walk past a replica of an ancient statue of a human-headed winged bull from Nimrud, Iraq, destroyed by the Islamic State. It's part of an exhibition called "Rising from Destruction" at Rome's Colosseum.

Alongside the massive, rising death toll in territories controlled by the Islamic State, one of the major casualties has been a trove of ancient treasures that are part of the Middle East's cultural heritage.

Now, replicas of several masterpieces vandalized or destroyed in Syria and Iraq have been created in Italy and are part of a UNESCO-sponsored exhibit called "Rising from Destruction." The exhibit, which goes through Dec. 16, has been set up in the Colosseum, the most visited site in Rome, drawing 6.5 million tourists a year.

"People started calling the amphitheater the 'Colosseum' from the colossus that was outside," a guide tells a group of tourists. While the ancient Romans saw a large statue of the Emperor Nero outside, today's visitors can now admire a different one inside — a human-headed winged bull.

Standing some 16 feet high, it's a life-size replica of the original that stood outside the palace at Nimrud in Iraq, bulldozed into dust by the Islamic State last year in what had been the capital of the Assyrian empire, founded in the 13th century B.C. 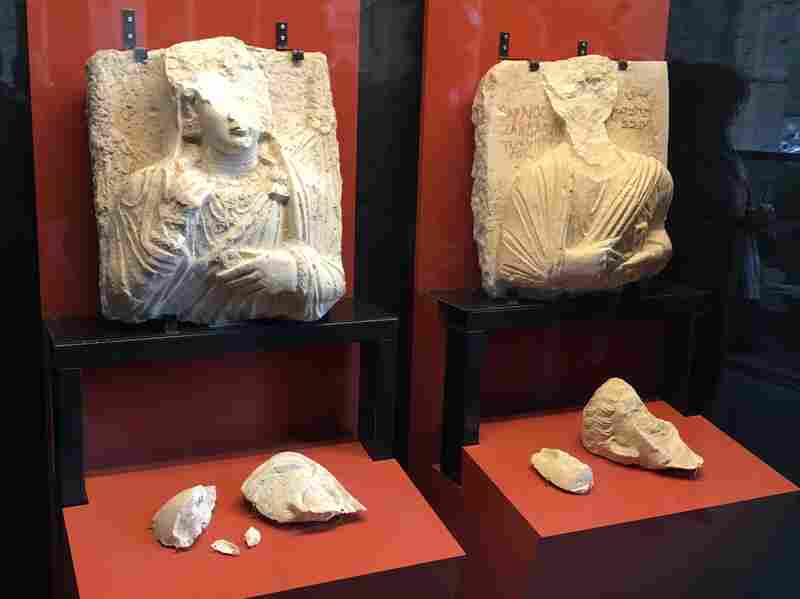 Two ancient marble busts, damaged during ISIS's occupation of the ancient site of Palmyra in Syria, are included in the exhibition. Sylvia Poggioli/NPR hide caption 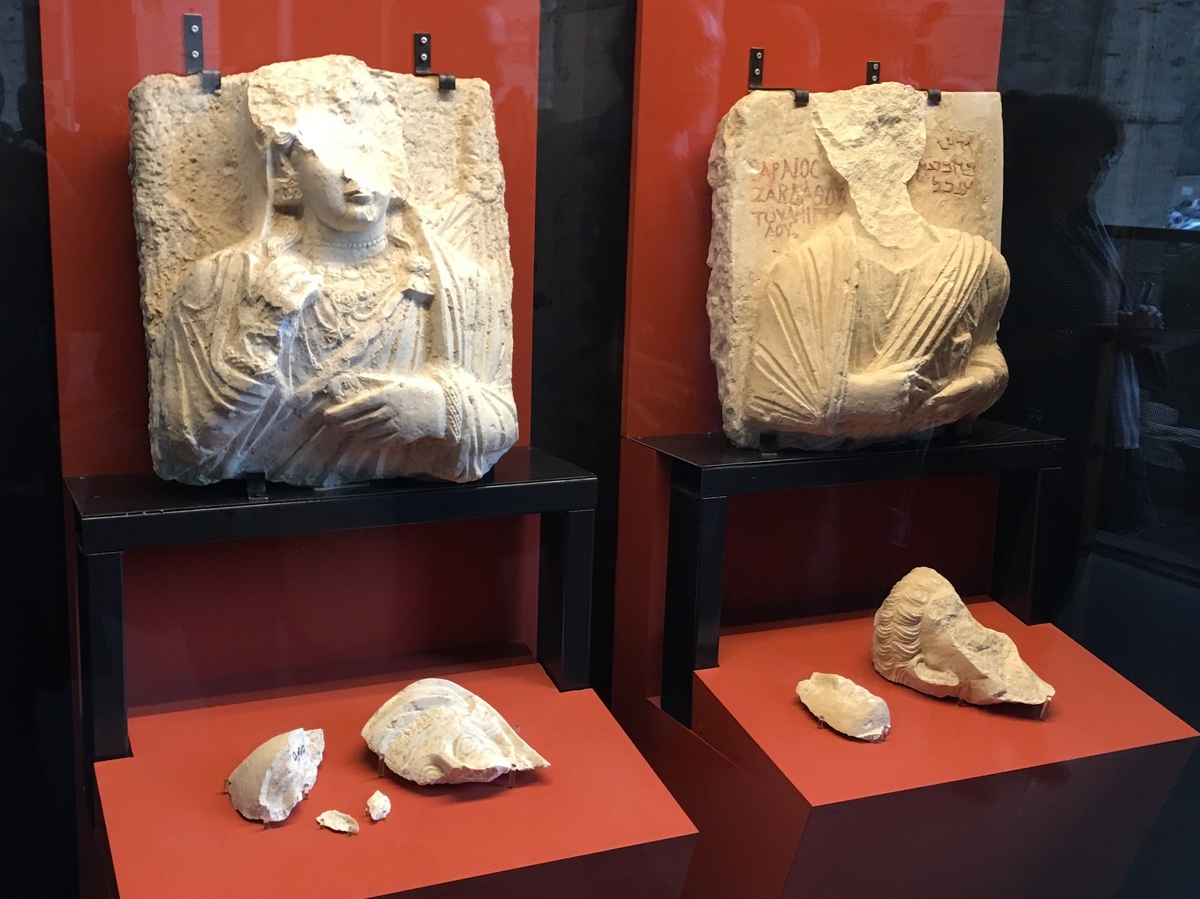 Two ancient marble busts, damaged during ISIS's occupation of the ancient site of Palmyra in Syria, are included in the exhibition.

"The winged bull was especially challenging because of its size," says art historian and restoration expert Cristina Acidini, who supervised the reconstructions in the Colosseum exhibit.

Specially trained technicians, she explains, worked from photographs to create a small-scale model. Then, thanks to 3-D printers and other state-of-the art technology, the replica was created in several pieces. These were then "hardened with a special varnish, and after the hardening process, has been totally covered by layers and layers of real stones, three kinds of stones, that have been grinded, like dust," she says.

PHOTOS: Ancient City Of Palmyra After ISIS Was Driven Out

The pieces were then assembled inside the Colosseum like a giant, three-dimensional jigsaw puzzle.

The other full-scale replicas in the exhibit are the reconstruction of a room in Ebla, Syria, where ancient archives had been discovered, and a portion of the ceiling from the 2,000-year-old Temple of Bel in Palmyra, the UNESCO world heritage site that was home to some of the Middle East's best-preserved ancient artifacts.

Francesco Rutelli, curator of the exhibit, says its message is "to show that all that has been destroyed can be reconstructed." Rutelli — who was once Italy's culture minister — says one country's cultural heritage is important for all humankind "because it is our heritage, not only the Syrian or Iraqi or Afghan or Latin American. It's a universal heritage."

During its 10-month occupation of Palmyra, the Islamic State razed two ancient temples and a triumphal arch. In August 2015, ISIS militants also beheaded Khaled al-Asaad, the archaeologist who had been Palmyra's antiquities custodian for 40 years, because he refused to reveal the location of artifacts he had hidden.

The Rome exhibit also contains two ancient marble busts — that Rutelli calls the "war-wounded of Palmyra" — damaged during ISIS's occupation of the ancient site. The busts will be restored in Italy and returned to Syria once the conflict is over.

The curator says that while during a war it's very rare to open up a corridor for culture, the two busts were able to arrive in Rome thanks to a complicated diplomatic effort and the cooperation of both the Syrian Directorate of Antiquities and members of the opposition. "It's a very rare situation," says Rutelli. "We have to recognize that there are people who do not resign when the danger comes."