Accessibility links
Why Philippine President Rodrigo Duterte Distrusts The U.S. : Parallels Duterte isn't winning friends in the U.S. with his tirades against President Obama and threats to downgrade military ties. The roots of his dislike of the U.S. go back more than a century. 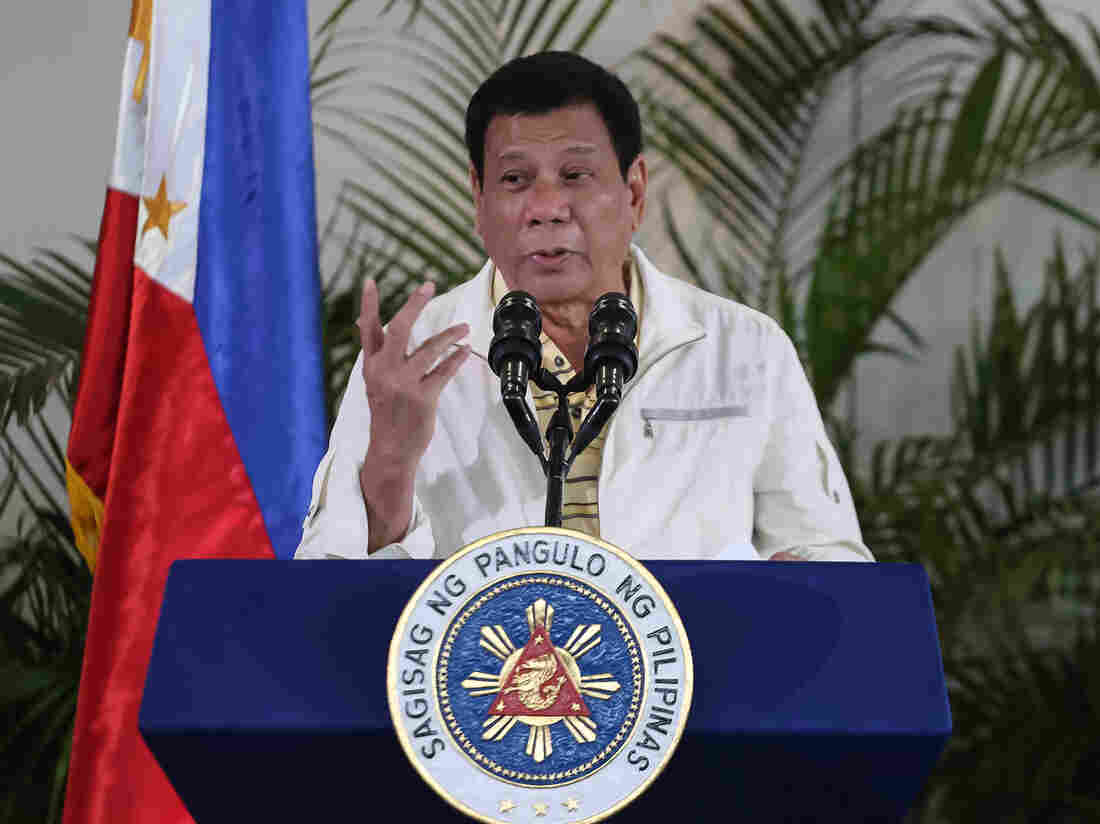 Philippine President Rodrigo Duterte speaks during a news conference at the airport in Davao City, prior to his departure for the ASEAN summit on Sept. 5. He called President Obama a "son of a bitch" and warned him not to question extrajudicial killings in the Philippines' war on drugs. AFP/Getty Images hide caption 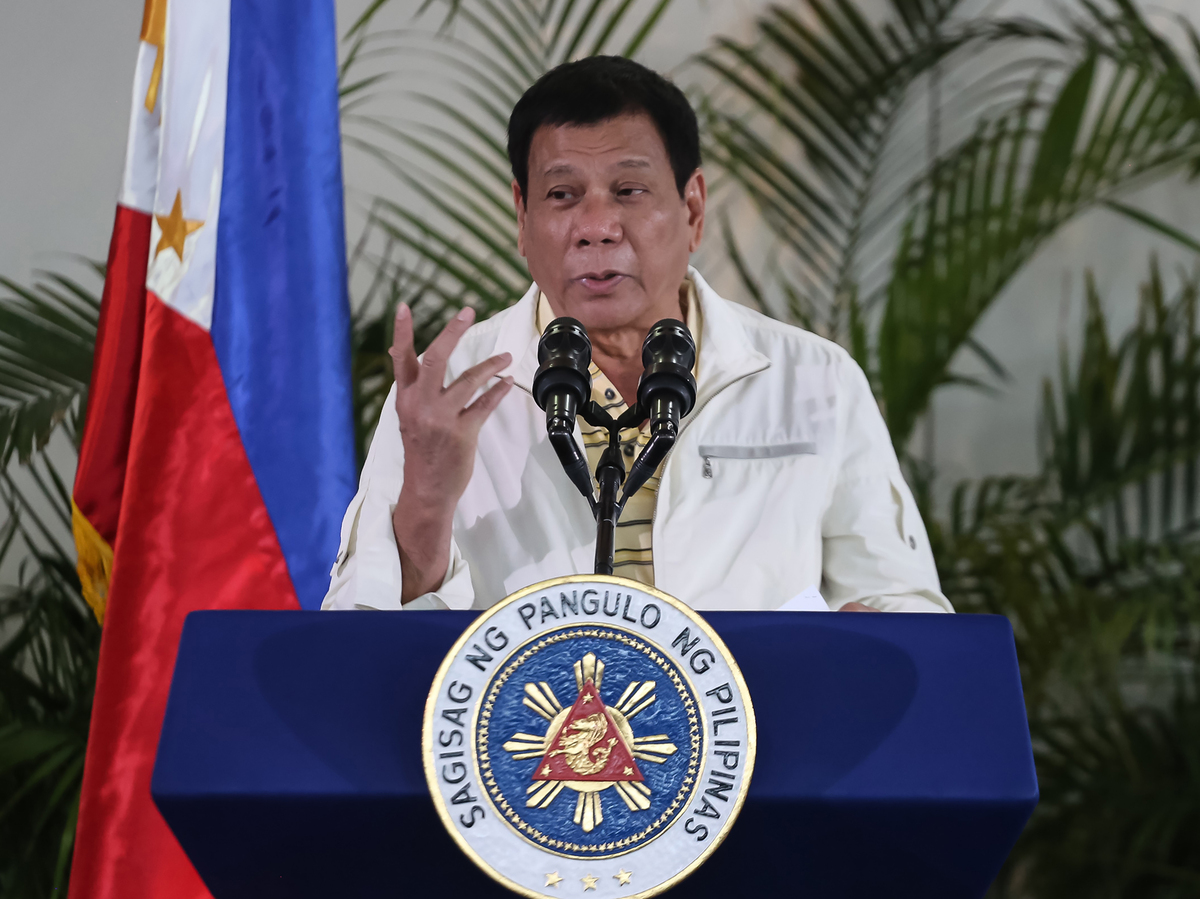 Philippine President Rodrigo Duterte speaks during a news conference at the airport in Davao City, prior to his departure for the ASEAN summit on Sept. 5. He called President Obama a "son of a bitch" and warned him not to question extrajudicial killings in the Philippines' war on drugs.

Want to know why the Philippines president, Rodrigo Duterte, seems to hate the U.S. so much? The roots go back more than a century, but there's a more recent reason as well. For that, look no farther than the Evergreen Hotel in the southern city of Davao, where Duterte served as mayor for more than 20 years.

It's a rundown flophouse, up a long flight of stairs in the middle of Chinatown. At $15 a night, it's way overpriced. A sign on the wall says "Strictly No Smoking." The desk clerk warns that making bombs in the rooms is "highly prohibited," too — even though she admits with a nervous laugh that it's been done before. By an American citizen named Michael Meiring.

On May 16, 2002, the self-described treasure hunter accidentally blew himself up in room 305 with an explosive device he had kept in a metal box in his room. Fe Basan, then commander of the Santa Anna Police Station around the corner from the Evergreen, arrived on the scene minutes after the explosion.

"There was a fire, and heavy smoke in the room," Basan says. "And we saw him in the room with his leg already gone, and unconscious, maybe because of the pain."

Basan says Meiring had been a frequent guest at the hotel, but not a popular one. "He was not a friendly guy," she recalls the bellboys telling her. One who "got easily irked and didn't want to talk to anyone." A man who had given hotel staff strict instructions not to touch the boxes in his room — with reason, as it turned out.

Basan says police rushed Meiring to the hospital, planning to interrogate him later. They started preparing criminal charges against him — for starters, for keeping explosives in his room and causing property damage to the hotel. 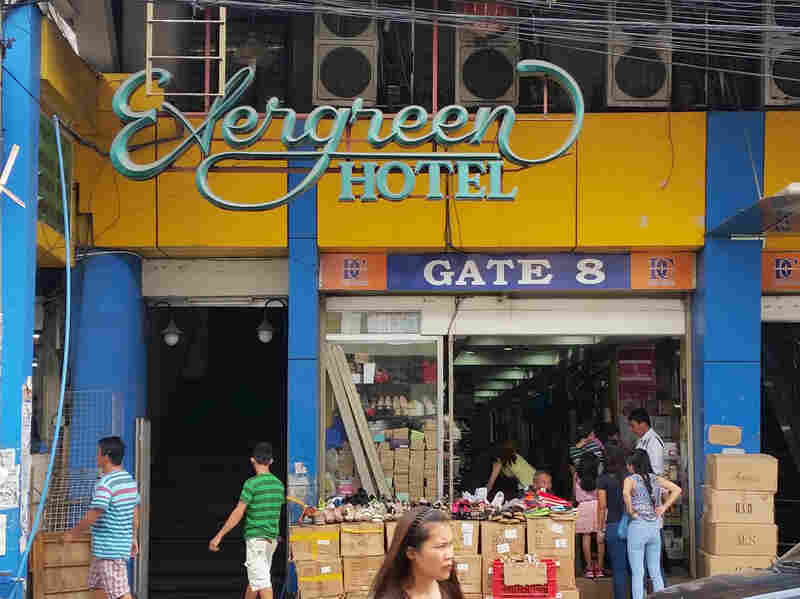 Michael Meiring, a U.S. citizen injured in a 2002 explosion in his room at the Evergreen Hotel in Davao, was spirited out of the hospital by men who locals say were FBI agents. Philippine President Rodrigo Duterte was Davao's mayor at the time and has never forgotten the incident. Michael Sullivan for NPR hide caption 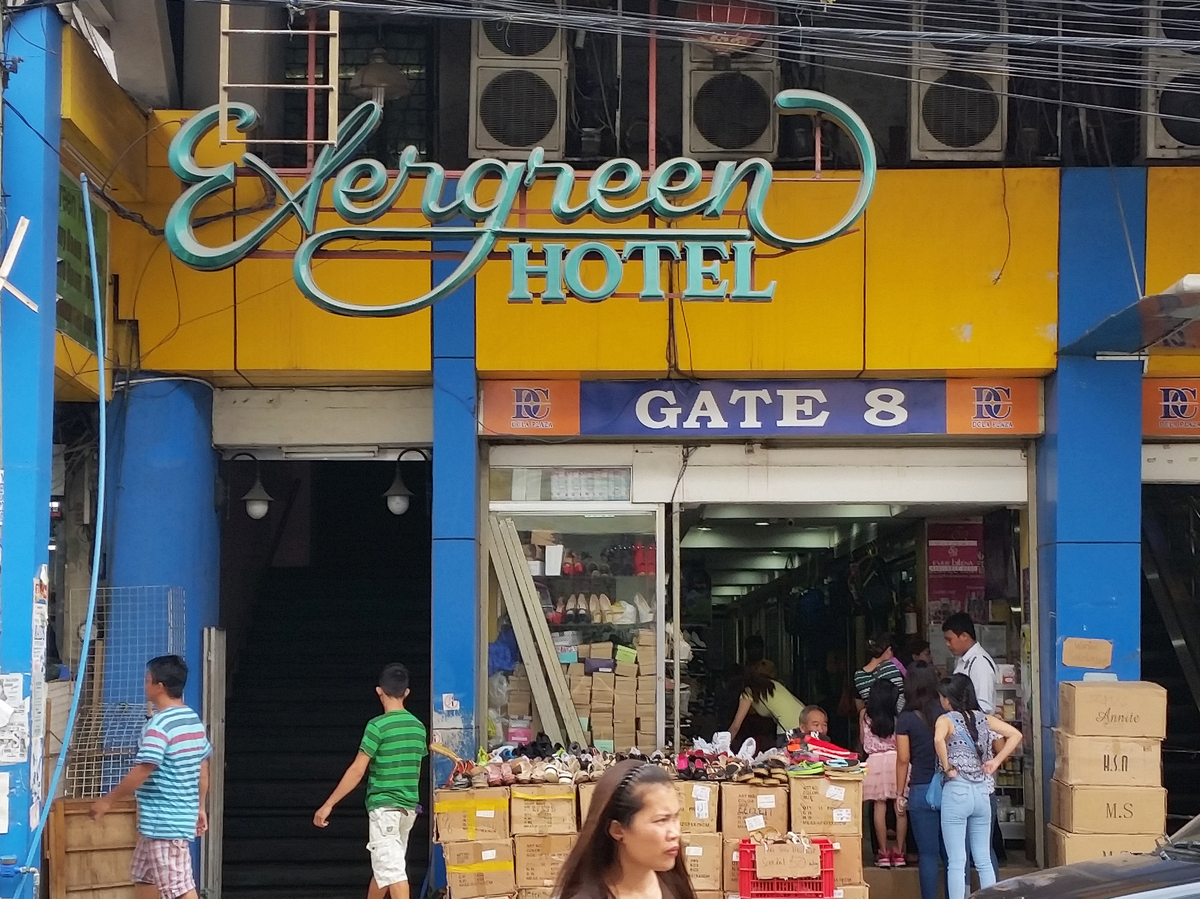 Michael Meiring, a U.S. citizen injured in a 2002 explosion in his room at the Evergreen Hotel in Davao, was spirited out of the hospital by men who locals say were FBI agents. Philippine President Rodrigo Duterte was Davao's mayor at the time and has never forgotten the incident.

Back then, the island of Mindanao was a dangerous place, a hotbed of separatist violence — beset by an ongoing communist insurgency and various Muslim separatist groups chafing at rule from Manila. Even today, it remains dangerous. At the time of the Meiring incident, there had been recent other bombings, not far from Davao, which made police eager to question the American.

But they never got the chance. Meiring was spirited out of the hospital just a day later, allegedly by U.S. operatives, says the former commander of military intelligence in Davao at the time, who wishes to remain anonymous.

"According to the doctor, he was taken by men, at least four, wearing FBI shirts, and then he was flown from Davao to Manila in a chartered plane," the former commander says.

Chief Inspector Basan says someone from the embassy promised her the same thing if she allowed U.S. agents access immediate access to Meiring at Davao Doctors Hospital, but she says she wasn't interested. When Duterte found out Meiring was gone, Basan says, he was furious.

The former army intelligence commander says the mayor saw Meiring's removal as a violation of Philippine sovereignty and of his own authority. "That's the beginning of why Mayor Duterte, now President Duterte, hates the Americans," he says.

The mayor had reason to be angry, says Serafin Ledesma Jr., publisher of the Mindanao Journal.

Philippine authorities issued a wanted poster for Michael Meiring, whose case is a major reason for Duterte's distrust of the U.S. A copy of the poster, shown here, is included in the local police report. Michael Sullivan for NPR hide caption 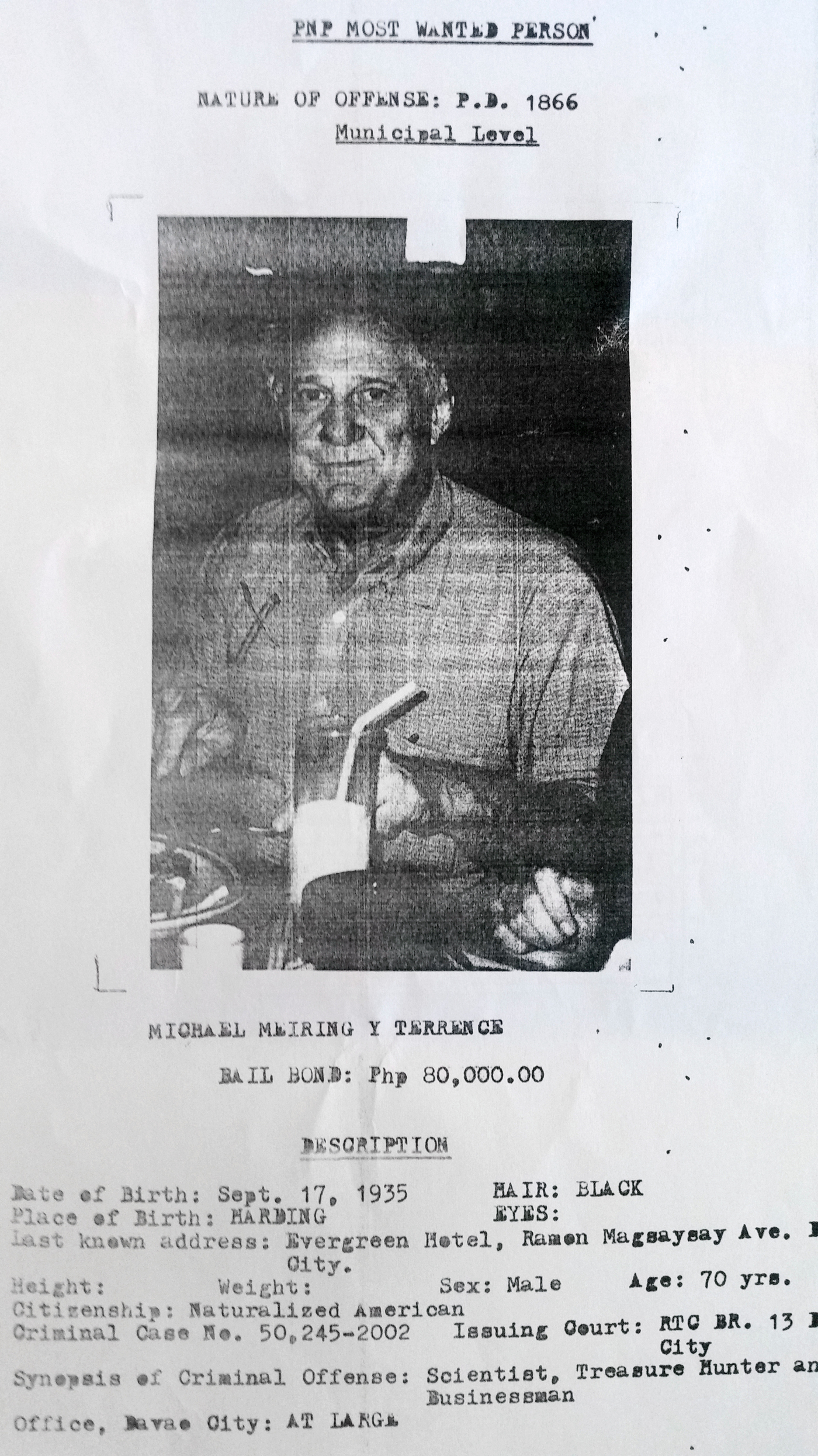 Philippine authorities issued a wanted poster for Michael Meiring, whose case is a major reason for Duterte's distrust of the U.S. A copy of the poster, shown here, is included in the local police report.

"The sheer arrogance of the FBI agents to just barge into Davao City and pull out [a] very important person who should have been undergoing interrogation by Davao City authorities," Ledesma says. "It was very roughshod treatment [Duterte] got from the embassy. Because in those times, we were solving a lot of problems involving bombings here and there, and it turns out, here is an American with explosives which prematurely exploded. And why is he in that hotel? And why is he carry[ing] explosives?"

When NPR reached out to the U.S. Embassy in Manila to ask about the 2002 Meiring incident, we received an emailed response:

"Mr. Meiring was initially treated in Davao City. Upon the recommendation of local doctors, Mr. Meiring was transported to a hospital in Manila. Once in Manila, doctors then recommended his medical transfer to the United States to a facility that had a more advanced burn center. ... We took no action beyond providing routine consular services to a U.S. citizen with a medical evacuation."

Press reports in Manila and Mindanao have speculated that Meiring worked for the CIA at a time when the U.S. was bolstering its military presence in Mindanao as part of the post-Sept. 11 war on terrorism. Meiring's ability to travel around Mindanao, including rebel-held areas, only fueled speculation here that he was part of a larger, clandestine operation to destabilize Mindanao. It would be a pretext to justify Manila to allow a bigger U.S. presence in the region.

"I cannot say that's right, but I cannot also say that it's wrong," says the former army intelligence officer. "Maybe because he was a 'treasure hunter' and had maps, maybe that's the cover story of his true intention here."

Ledesma, of the Mindanao Journal, is more blunt, saying, "The fact that he was pulled out of the hospital by FBI agents tells you a story that he is not after all [the] treasure hunter, as he claims to be."

Duterte has suggested much the same thing and cited the incident to explain his decision in 2013 not to allow the U.S. military to operate drone flights out of Davao.

The Meiring case is one reason for Duterte's mistrust of the U.S. — the main reason, according to most — but not the only one. His sense of grievance goes back even further into the past, to history dating back to the U.S. colonial rule of the Philippines from 1898 to 1946.

"He's not against the American people. But more the policy," says Davao journalist Editha Caduaya, who has known Duterte for decades. He is angry, she says, about "the injustice done to the Moros," the Muslims of Mindanao. Why? "Because his mother has roots from the Muslim settlers of Mindanao."

Duterte is particularly incensed, Caduaya says, about the alleged massacre of hundreds of Moro Muslims, including women and children, by U.S. troops on the island of Jolo in 1906. Duterte circulated pictures from that era to his fellow heads of state at last month's ASEAN summit in Laos.

"When he recalls that incident," Caduaya says, "he usually rants."

Taken together, the Meiring incident and the history of U.S. involvement in Mindanao help explain Duterte's mistrust of the U.S. and his profane language in reaction to what he sees as U.S. lecturing about alleged human rights violations in his ongoing war on drugs, in which at least 3,600 people have been killed.

Even so, Duterte says he still values the U.S.-Philippine relationship. He just wants the U.S. to stay out of the Philippines' domestic affairs. Another round of joint U.S.-Philippine Marine exercises went ahead this month, though Duterte suggested they may be the last.

As for Meiring, the alleged treasure hunter — he died in the U.S. in 2012. There's still a warrant for his arrest in Davao.