Accessibility links
As Iraqi Forces Prepare To Attack ISIS-Held Mosul, Civilian Exodus Could Follow : Parallels The U.S.-backed Iraqi offensive to try to force ISIS from Mosul may be just days away. Hundreds of thousands could be displaced in the fighting but the nearest camp can accommodate only 50,000 people. 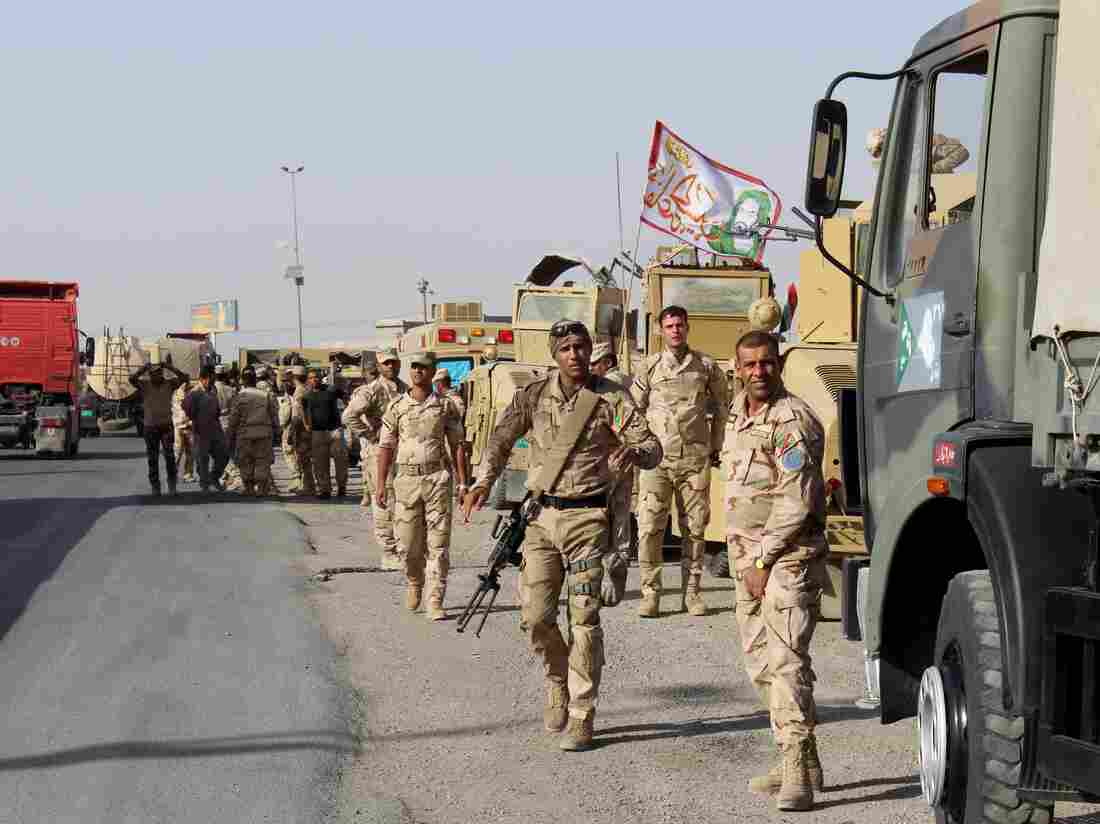 The Iraqi Army's 76th Brigade Command forces in Kirkuk move toward Mosul on Oct. 11 in an operation to retake the city from ISIS control. Anadolu Agency/Getty Images hide caption 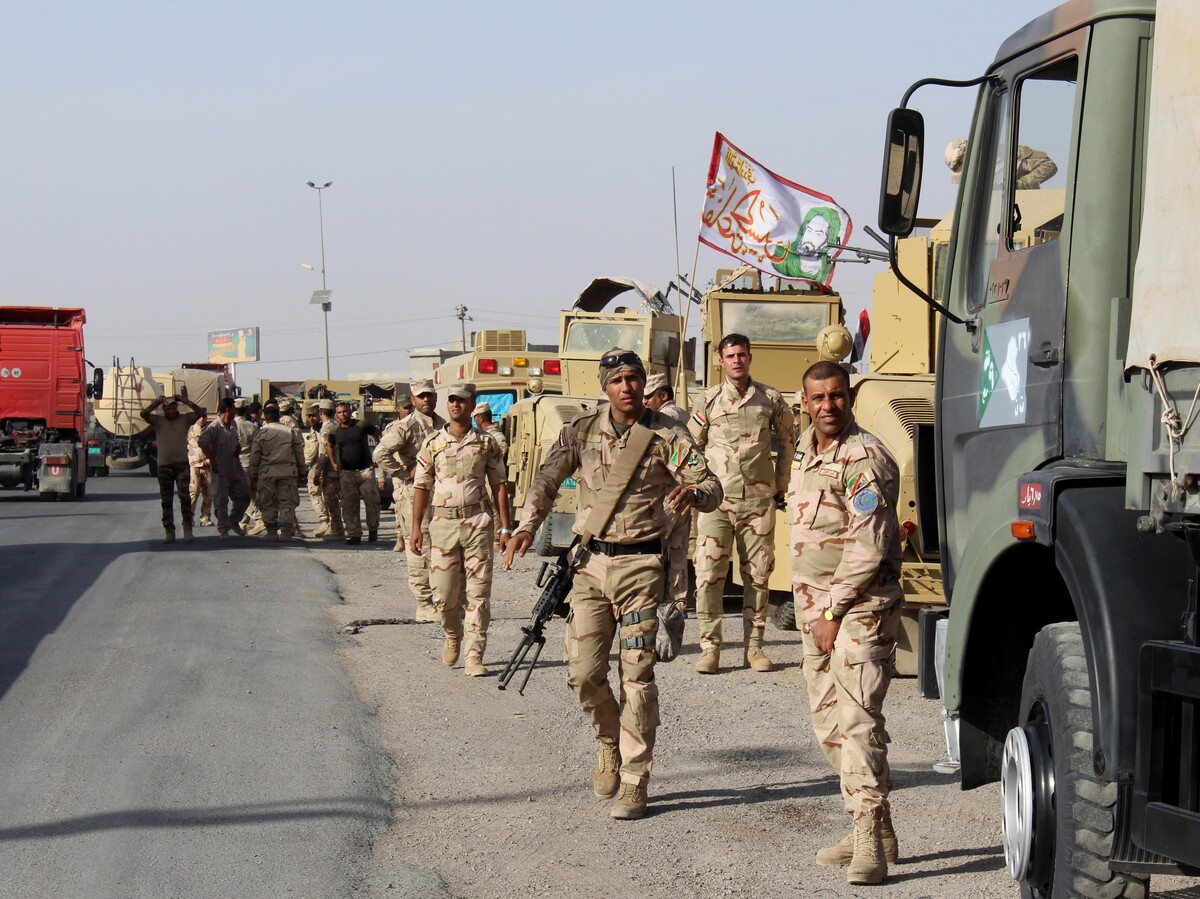 The Iraqi Army's 76th Brigade Command forces in Kirkuk move toward Mosul on Oct. 11 in an operation to retake the city from ISIS control.

For more than two years, the Islamic State has held Mosul, in northern Iraq, in a stranglehold. People who have fled say the militants terrorize people, conduct public executions, recruit children as fighters, forbid communication with the outside world — all in the name of enforcing a brutal regime they call Islamic.

That could now be set to change. Iraq's security forces and their allies are readying for an assault on the city. The roads to the city are defended and ISIS is expected to fight fiercely, but security officials insist they will take Mosul back soon.

Mosul is a crucial battleground. It's one of Iraq's largest cities and the country's last major urban center still controlled by the Islamic State. Forcing ISIS out would be a crippling blow to the weakened extremist group and a significant boost for the embattled Iraqi government.

At the same time, fears are growing that people still in the city — maybe more than a million residents — will leave in a mass displacement or be caught up in the fighting with no way out.

About 26,000 people are already living at the Debaga camp for the displaced, about an hour's drive from Mosul in Iraqi Kurdistan. They fled in fear of ISIS or the looming battles. Outside, a small market has sprung up where those in the camp buy vegetables from local residents. It is clear the Mosul offensive is on everyone's mind — people cluster round and interrupt each other to talk about it.

"Many people will come, many people," says Nihaya Obeid, a woman living in the camp who is picking over a pile of green peppers. She says already the camp is too full and hundreds are arriving every day.

"The situation will get harder," warns Jassim Mohammad, a local stallholder. He says the aid groups that run the camp will be overwhelmed. "The people will come without money, without food," he says. 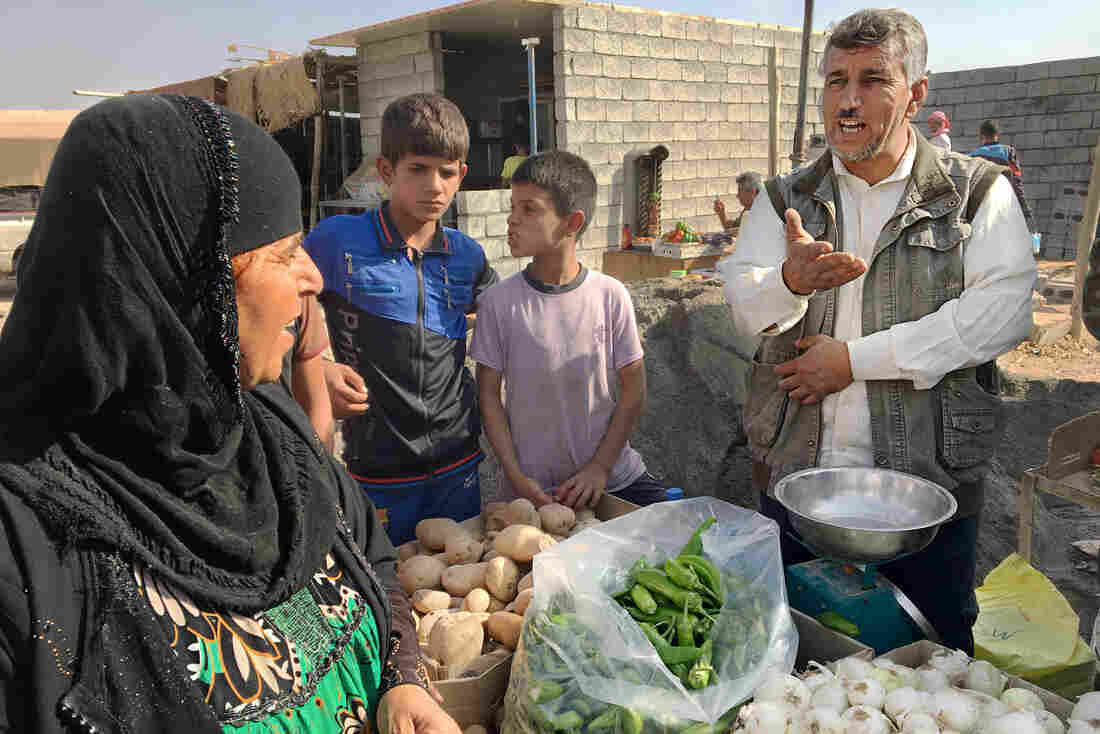 Nihaya Obeid (left), a resident of Debaga camp for the displaced, talks to local stallholder Jassim Mohammed about their fears of a mass displacement from Mosul. Alice Fordham/NPR hide caption 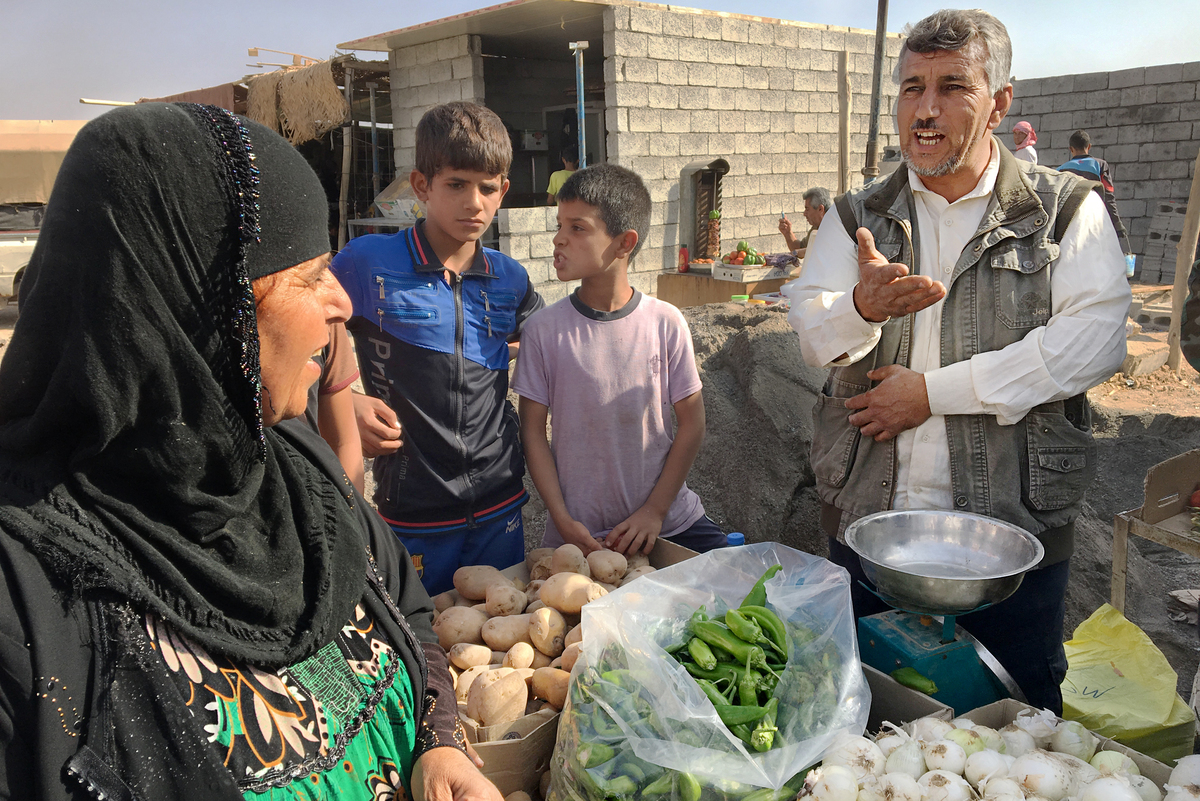 Nihaya Obeid (left), a resident of Debaga camp for the displaced, talks to local stallholder Jassim Mohammed about their fears of a mass displacement from Mosul.

Inside the camp, the man who runs the place, Ruzgar Obeid, laughs ruefully as he tells me he doesn't sleep well, worrying about his camp. He works with an Iraqi charity and international aid groups as well as the U.N. to run this camp — one of many in Iraq, where more than 3 million people have been displaced since January 2014.

He worries about the offensive, he says, because "we are expecting in the first hours, more than 200,000 people will flee Mosul."

That number is based on one scenario that aid agencies are working on, though no one really knows exactly what will happen. Aid groups might be able to provide food and water for that many people, but not shelter.

"The reality is that with the existing camps and sites that have been identified, there is capacity right now, as we speak, for some 50,000 people," Karl Schembri of the Norwegian Refugee Council says with a sigh.

Schembri says it's also possible there just won't be a safe route out for people, and they could end up stuck inside the fighting or could die trying to escape.

He raises another issue: screening by Iraqi security forces. As people have fled ISIS-held areas over the past two years, security forces have often moved the men to separate locations — usually cramped holding areas — for interrogation and checking. Some are allowed to rejoin their families later. Others are put in prison. The process is opaque and, some say, unfair. 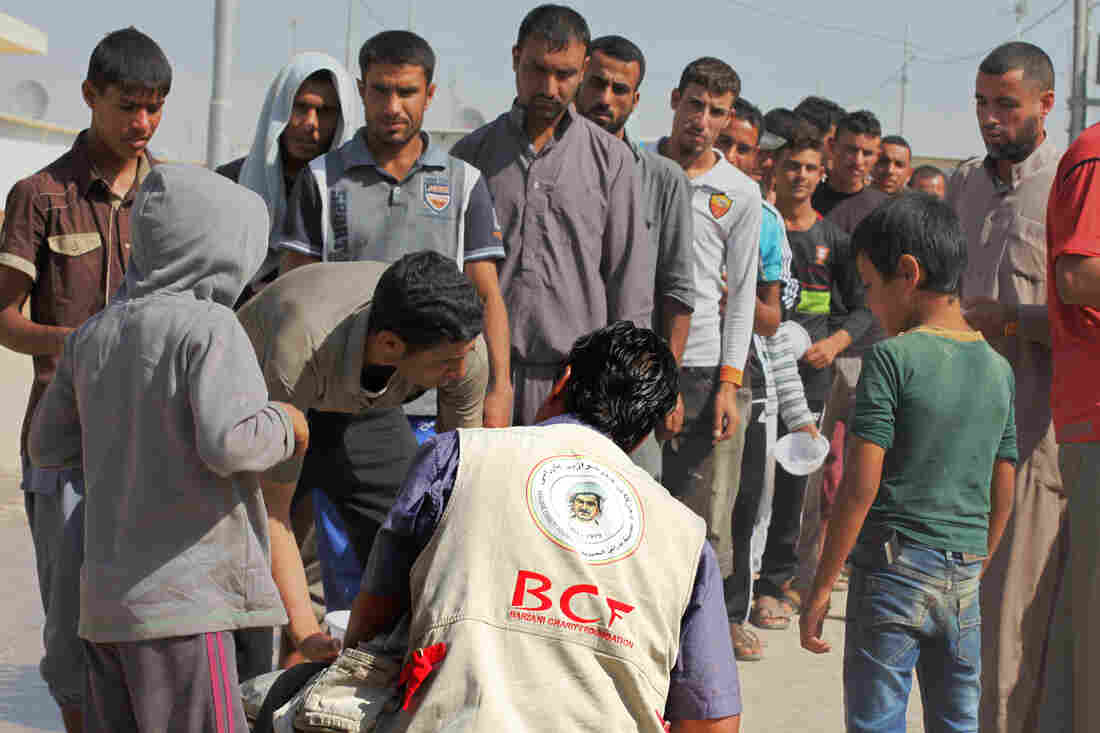 Men wait in line for food at a camp for the displaced in Northern Iraq. More than 3 million people in Iraq have been displaced since January 2014. Alice Fordham/NPR hide caption 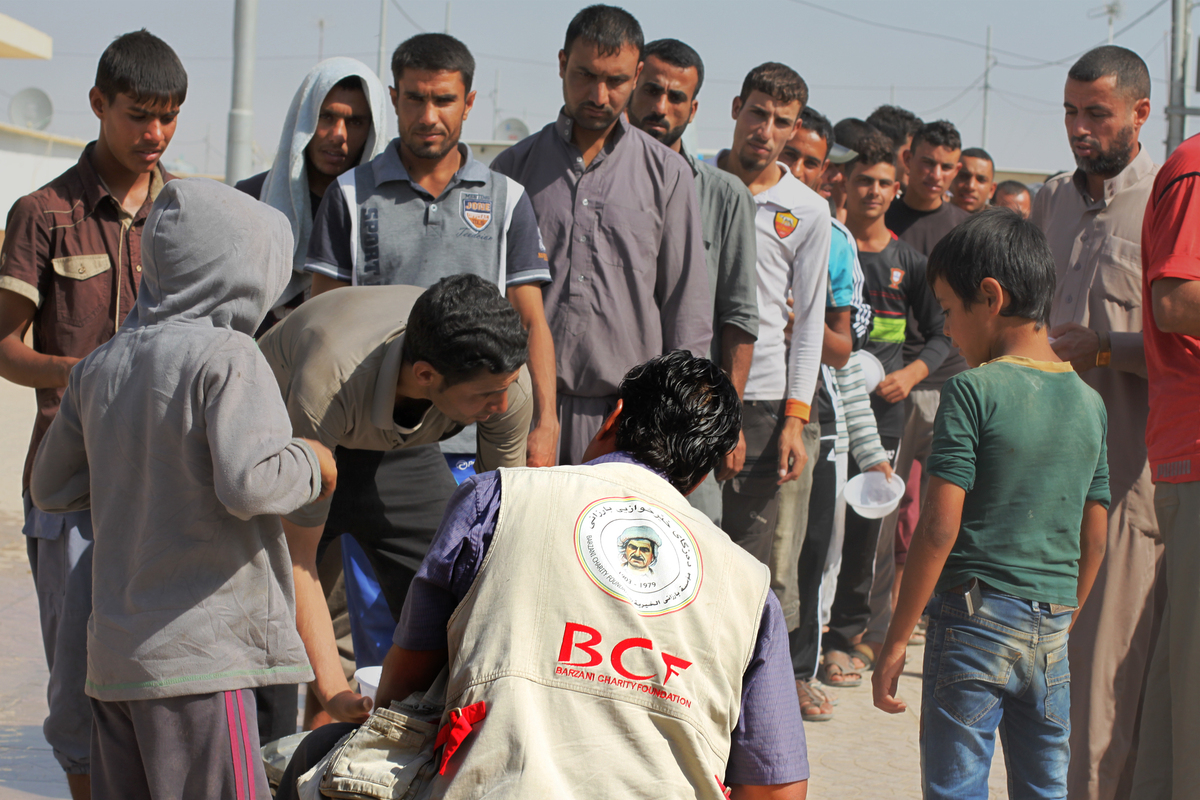 Men wait in line for food at a camp for the displaced in Northern Iraq. More than 3 million people in Iraq have been displaced since January 2014.

In the camp, as families line up for vaccinations and bleak-eyed children wail, a woman from Mosul named Zeina Ali tells me her son was taken for screening and put in prison. The Iraqi Kurdish security services said he was with ISIS.

It was not possible to check her account, but she says she believes the Iraqi Kurdish intelligence forces had seen a list posted on Facebook of students studying Islamic law in an ISIS-run school. All schools in Mosul are now run by ISIS and teach Islamic law.

"It's 40 days since I saw him," she says, wiping her eyes on the corner of her head scarf. "And I don't know what will happen."