Accessibility links
After Voters Reject Colombia Peace Deal, Guerrillas Are Left In Limbo : Parallels FARC rebels are wondering whether they might be called back again into combat. Many hope not. After voters rejected a peace deal, "I could feel all my dreams falling apart," says one. 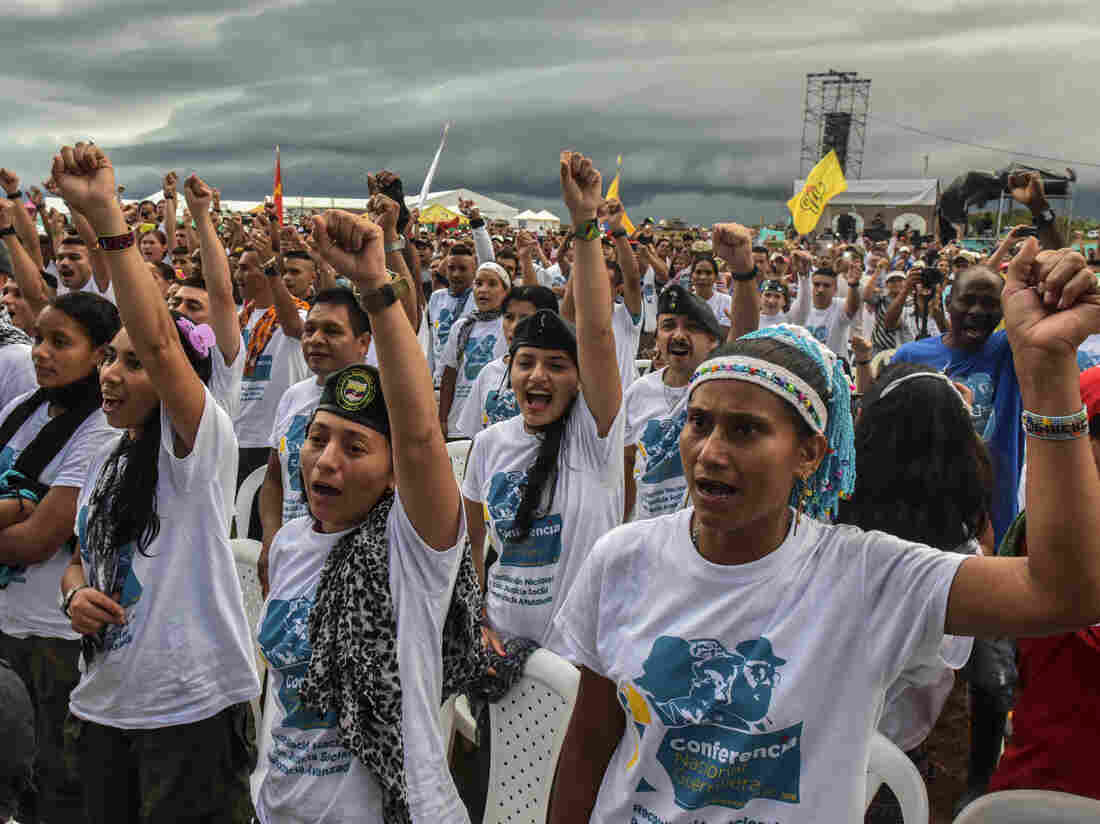 FARC members celebrate the announcement of the approval of the peace deal with the government during the closing ceremony of the 10th National Guerrilla Conference in Llanos del Yari last month. There are some 6,000 FARC guerrillas in Colombian camps. They can't start demobilizing until they are granted amnesty, but lawmakers can't act until a new peace agreement emerges. Luis Acosta/AFP/Getty Images hide caption 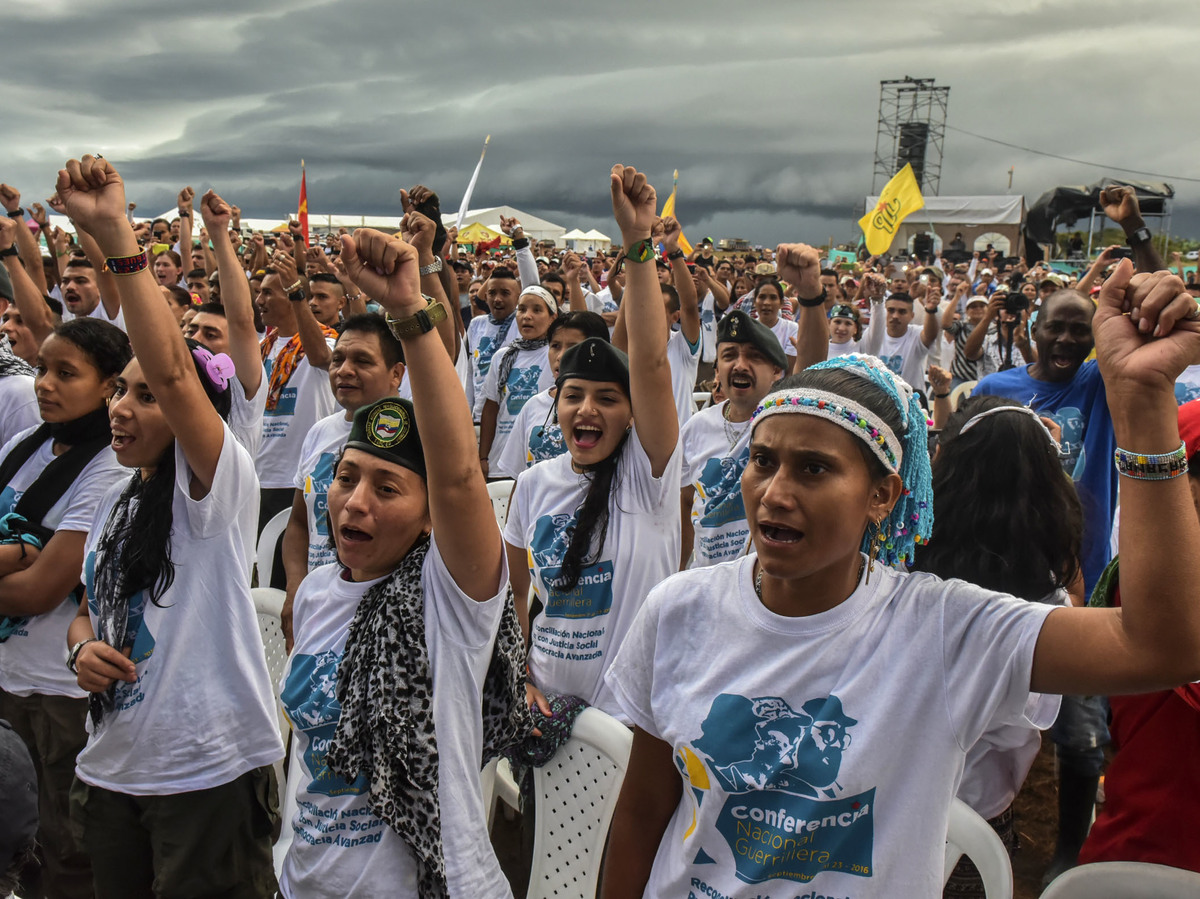 FARC members celebrate the announcement of the approval of the peace deal with the government during the closing ceremony of the 10th National Guerrilla Conference in Llanos del Yari last month. There are some 6,000 FARC guerrillas in Colombian camps. They can't start demobilizing until they are granted amnesty, but lawmakers can't act until a new peace agreement emerges.

Neither at war nor fully at peace, Marxist rebels in southern Colombia who want to lay down their weapons are instead killing time and contemplating whether they will be called back into combat.

It's a surreal state of affairs, brought on by a stalemate over an agreement to end Colombia's 52-year-old guerrilla war. The accord was signed last month but then rejected by Colombian voters in a binding referendum on Oct. 2. Now, the entire peace process is on hold, leaving thousands of guerrillas in limbo.

"With peace, we would be able to do all the things we were unable to do during the war: study, work, visit our families," says Milena Reyes, 27, who ran away from home as a teenager to join the Revolutionary Armed Forces of Colombia, the rebel group known as the FARC. When the peace accord was rejected, she says, "I had a lump in my throat because I could feel all my dreams just falling apart."

Amid the disappointment, sports provide some diversion. At a FARC bivouac in a remote area known as the Yarí Savannah, located about two hours by truck from the nearest village, guerrillas play soccer on a muddy field. Rebels watching the game wear colorful T-shirts rather than camouflage.

About half the roughly 250 rebels wander about the camp unarmed. It's an odd sight in a rebel army in which leaving one's rifle unattended used to merit stiff sanctions, such as digging trenches. Asked when was the last time she fired her rifle, FARC radio operator Hilda Ramírez says, "About five years ago."

For most of the past half-century, though, the FARC was in full battle mode.

The rebels launched their war in the 1960s to fight for land reform and social equality. Despite the collapse of communism, profits from drug trafficking, kidnappings for ransom, extortion and illegal gold mining allowed the FARC to fight well into the 21st century. All told, the war has killed more than 220,000 people and uprooted millions more from their homes.

But the FARC never came close to seizing power. After three failed attempts at peace talks, it agreed to launch a new round of negotiations with the Colombian government in Havana in 2012. The talks lasted four years, culminating on Sept. 26 with the signing of a final peace accord.

The next step was for the guerrillas to start turning over their weapons to U.N. inspectors.

After that, the plan was for the rebels to return to civilian life and form a left-wing political party.

"We thought it was a given that the referendum would pass and that we would start demobilizing," says Jairo Marin, a grizzled FARC veteran whose guerrilla wife was killed in the war.

Instead, the "no" vote topped the "yes" vote by a slim margin. The result was widely viewed as a rejection of the guerrillas, who have committed massive human rights abuses over the years.

It was also a wake-up call to President Juan Manuel Santos. He won this year's Nobel Peace Prize for his efforts to end the war, but his critics accuse him of caving into FARC demands at the peace table.

Conservative politicians, who campaigned against the accord, are demanding harsher penalties for rebels accused of war crimes, including a ban on holding political office. They also want them to be judged within Colombia's existing legal system rather than through a parallel, transitional justice system that was to be set up under the peace agreement.

Carlos Antonio Lozada, a member of the FARC's ruling secretariat who helped negotiate the accord, says the FARC would accept tweaks but not wholesale revisions to the original agreement. However, it could take months for the government and the opposition to hammer out a compromise.

On Thursday, Santos warned: "We can't start all over again with a clean slate... Time is conspiring against peace."

For now, the 6,000 FARC guerrillas located in camps throughout Colombia are stuck. They can't start demobilizing until the Colombian Congress approves an amnesty bill for rank-and-file rebels. But the lawmakers can't act until a new peace agreement emerges. Should the impasse continue, some analysts fear that frustrated rebels could end up joining drug-trafficking gangs.

Santos has extended a two-month-old bilateral ceasefire until the end of the year. But ceasefires are delicate and can be broken by a chance encounters between army soldiers and guerrillas.

FARC veteran Marin says the rebels are prepared for the worst.

"If the peace process collapses, we will have to go back to the armed struggle," he says.

But Lozada, the FARC negotiator, is confident that a deal to save the peace process will emerge. And in the course of an hour-long interview, he insists several times that the FARC has fired its last shot.

"There is no going back," he says. "The war in Colombia is over."