Accessibility links
As South Sudan Fights, Refugees Flow Into Uganda : Parallels South Sudan has been in turmoil for much of the five years since it became independent. That trouble is spilling over into northern Uganda, where refugees are flowing in. 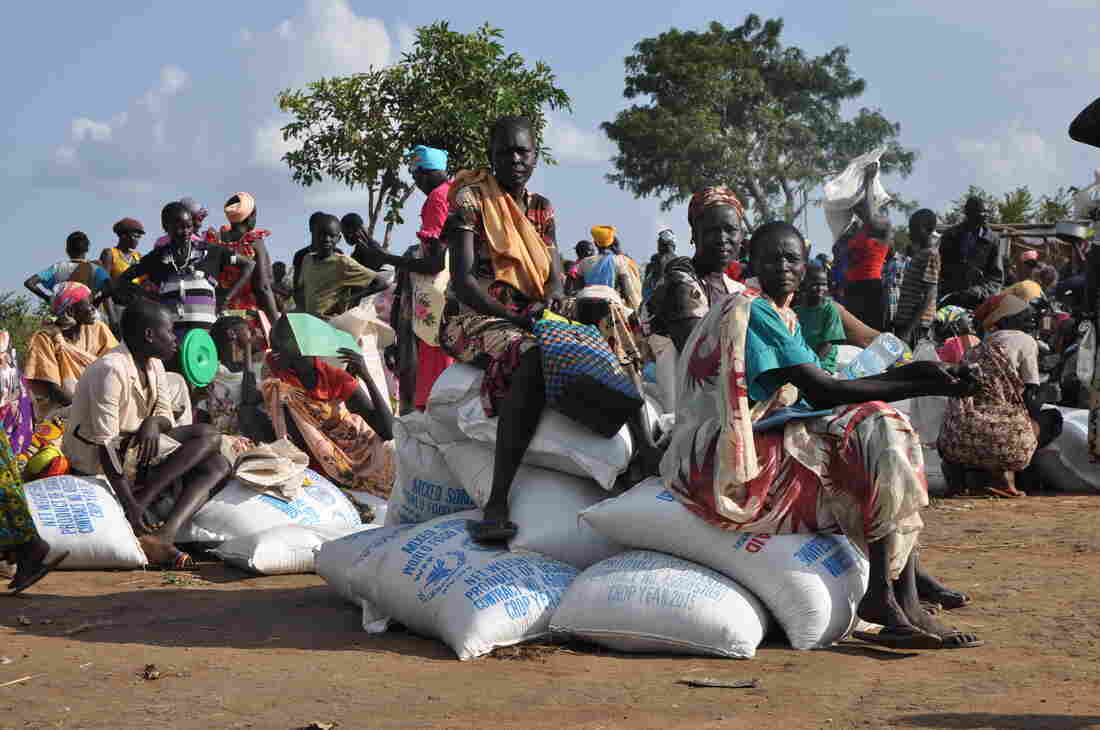 South Sudanese families sit with bags of food rations at the Ayilo Settlement Camp in northern Uganda. Refugees have been coming out of South Sudan in growing numbers since fighting resume there this summer. Durrie Bouscaren/St. Louis Public Radio hide caption 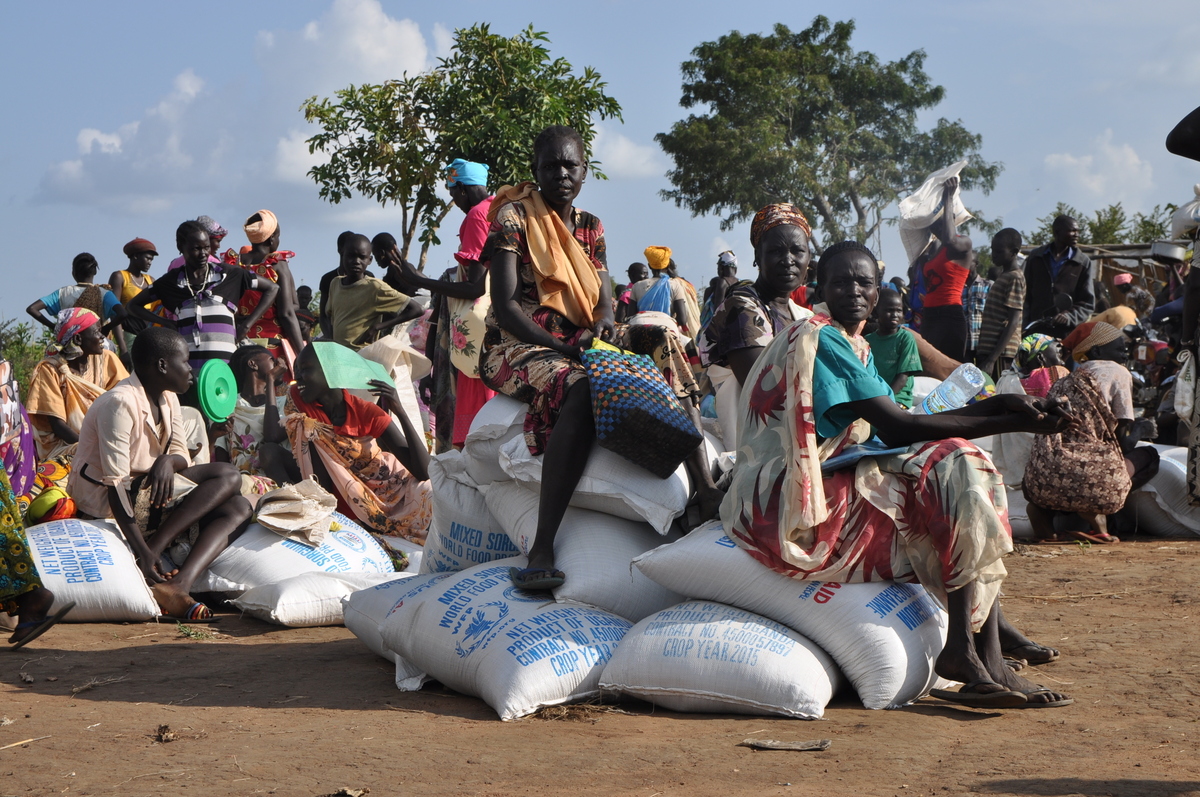 South Sudanese families sit with bags of food rations at the Ayilo Settlement Camp in northern Uganda. Refugees have been coming out of South Sudan in growing numbers since fighting resume there this summer.

One way to measure the growing turmoil in South Sudan is by the rapidly expanding refugee influx in neighboring Uganda.

A crowd of refugees press into a food distribution area at Pagirinya Refugee Settlement, one of the newest camps built to accommodate the latest arrivals in northern Uganda, just across the border from South Sudan.

Jonathan Taban, a father of six, explained that he's trying to see when he will receive food rations. He's been skipped twice now for a monthly allotment of grains, and he can't figure out why.

"I received food (in) July, emergency food for only 10 days. That is the last food I received, up to now," Taban said in late September. "Most of these people that are crowding there, they also missed food. They are trying to check their names."

A new round of clashes erupted this summer between government troops loyal to President Salva Kiir and fighters aligned with the former vice president, Riek Machar. Machar and his fighters had recently come back from exile as part of a peace process intended to end a conflict that began in 2013, just two years after South Sudan received independence.

The on-and-off fighting over the past three years has driven more than a million South Sudanese into other countries, according to the United Nations refugee agency.

On average, about 2,500 refugees — mostly women and children — are crossing from South Sudan into Uganda every day. Many are living in settlement camps, where resources are tight and some families are receiving only half of their normal food rations.

Taban is from South Sudan's capital, Juba. He said his neighbors were attacked by militants in July. His family fled the city on foot, eventually reaching buses that took them across the border to register as refugees in Uganda.

To make some money, the former cashier has been clearing land for other families. He opens his hands, cut and callused from digging in fields.

"These marks; I've been suffering, doing manual labor so I can feed my children," he said. His youngest, a 2-year-old boy, is getting sick. "He is tired, very tired. Malnourished." 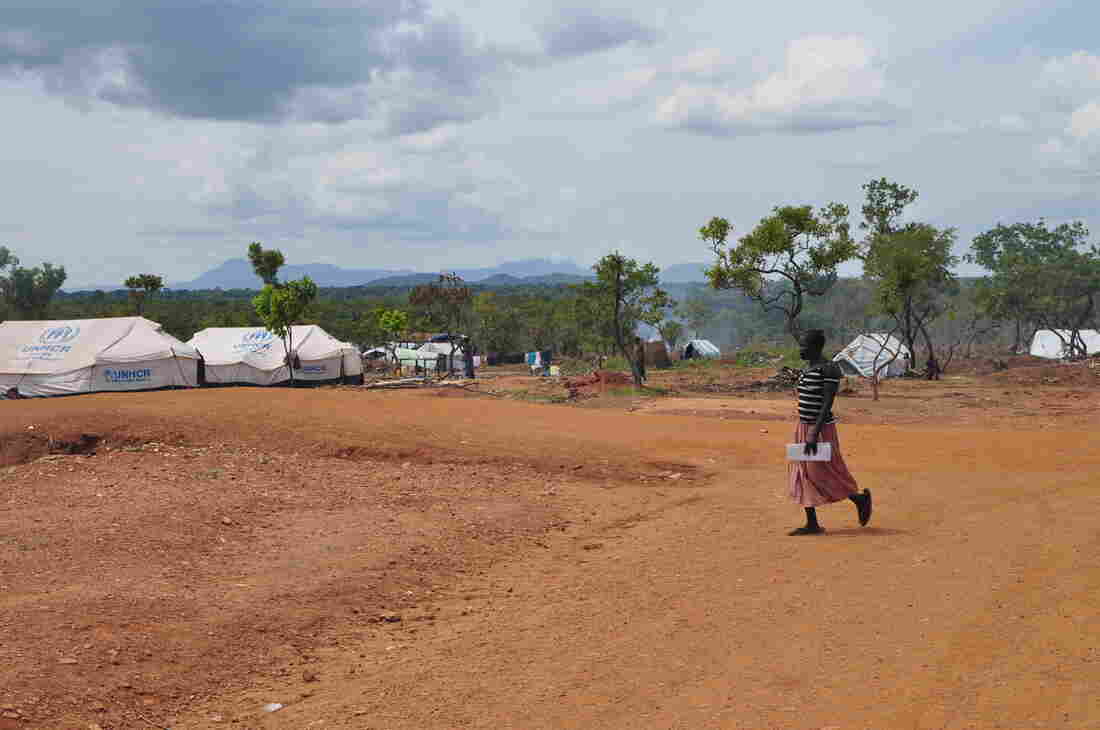 Refugee shelters and gardens at Pagirinya Refugee Settlement in northern Uganda. It is one of the newest camps built to accommodate new arrivals from South Sudan. Durrie Bouscaren/St. Louis Public Radio hide caption 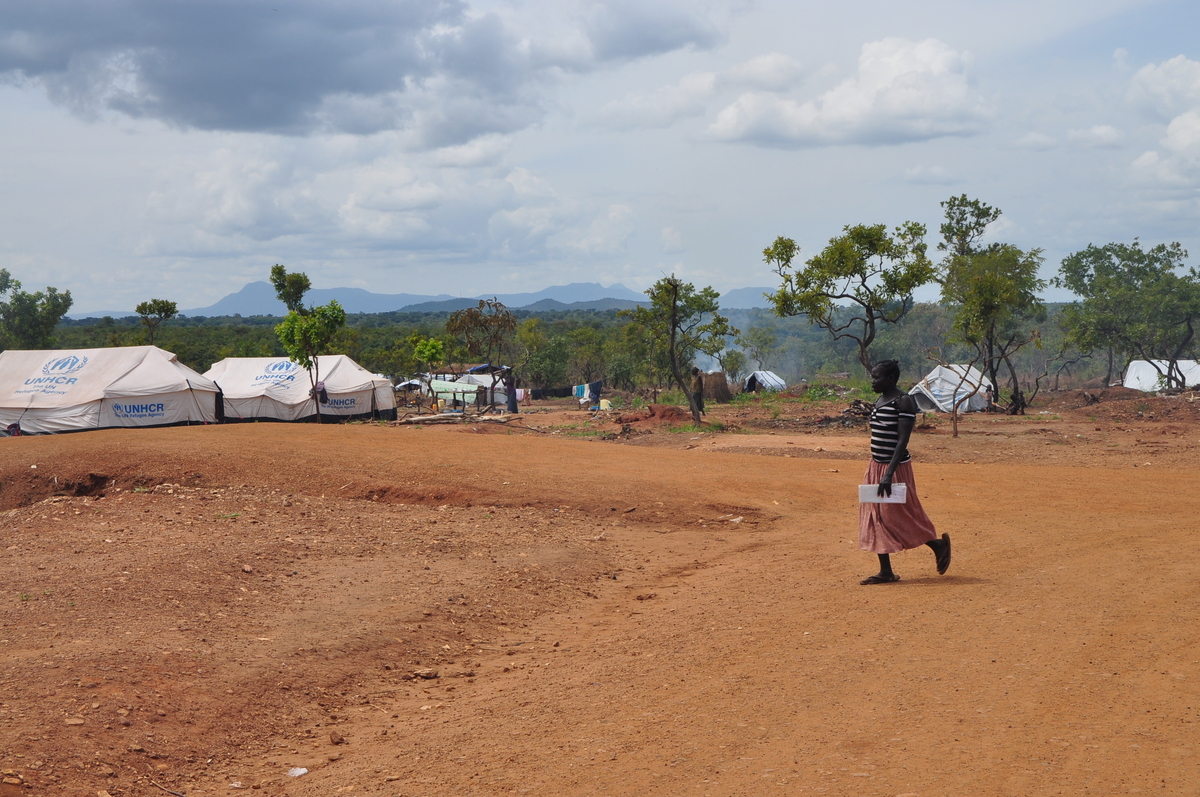 Refugee shelters and gardens at Pagirinya Refugee Settlement in northern Uganda. It is one of the newest camps built to accommodate new arrivals from South Sudan.

In Pagirinya, small shelters are wrapped in a white, waterproof material emblazoned with the blue logo of the U.N. refugee agency. Families tend gardens of cassava, sweet potatoes and peas. One street serves as a marketplace, where refugees and Ugandans who live nearby sell extra grain, roasted corn, and cards to add minutes on a cell phone.

Through Uganda's "self-sufficiency" approach to refugees, each South Sudanese family is given a plot of land to grow its own food. In practice, refugees say there isn't enough land to go around, which forces them to rely on food aid from the U.N.

U.N. officials said there are a couple of reasons a family might miss out on rations. Sometimes people go to the wrong place to pick up their food. Others don't know they have to register. A complaint desk tries to accommodate the cases that fall through the cracks.

At least 200,000 South Sudanese refugees have come into Uganda since fighting intensified in July. In August, the World Food Programme cut rations in half for families who have been in the country since July 2015 and are not considered especially vulnerable. Counted another way, it means the food that's provided for each household member has gone from about 2,100 calories a day to just over 1,000.

Ration cuts in camps near war zones aren't unusual. Syrian refugees saw the value of their food vouchers cut in half last year. Refugees in Kenya are experiencing cuts to their monthly rations as well.

"Each one of the countries in the [East Africa] region has far more refugees than it did five years ago, three years ago or in the case of Uganda even six months ago," said Challiss McDonough, WFP's regional spokesperson in Nairobi. "It's a staggering rate of new arrivals."

In South Sudan, war has forced farmers out of their fields and interrupted supply lines. At least 4.8 million South Sudanese are experiencing food shortages, according to the Food and Agriculture Organization of the UN.

At a clinic back in Pagirinya, medical officer Ahmad Rasul of Medical Teams International said malaria and malnutrition are two of his biggest concerns, because the people arriving have already been hungry for a long time.

"I think it started from there, and when they arrived here also, there were delays. The amount, the quality and the quantity of food that's given to them, it's limited," Rasul said.

Funding for this story was provided by the International Women's Media Foundation.