Accessibility links
A Palestinian Preaches Positive Thinking To A Tough Crowd: His Own People : Parallels Motivational speaker Saed Karzoun has a tough sell in the West Bank as he tries to preach optimism and self-empowerment at a time when pessimism runs high among Palestinians. 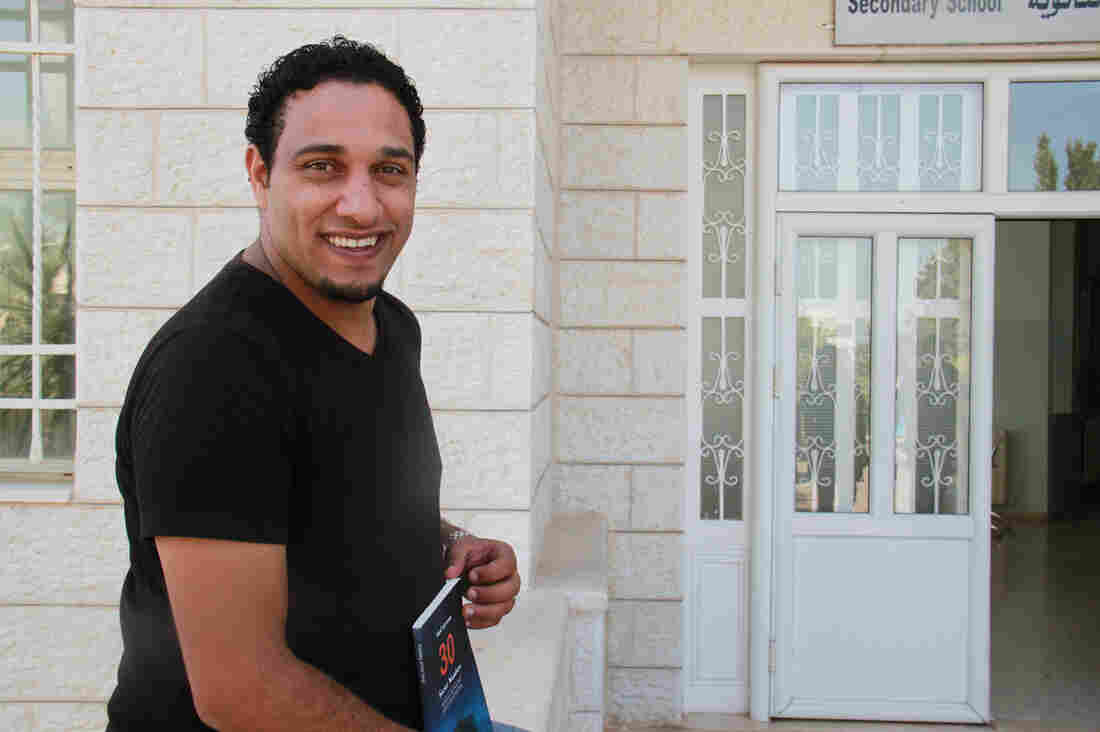 Palestinian Saed Karzoun, 31, is a motivational speaker who preaches positive thinking in the West Bank. He acknowledges it's a hard sell, with many Palestinians saying they are depressed about the present and pessimistic about the future. Daniel Estrin/NPR hide caption 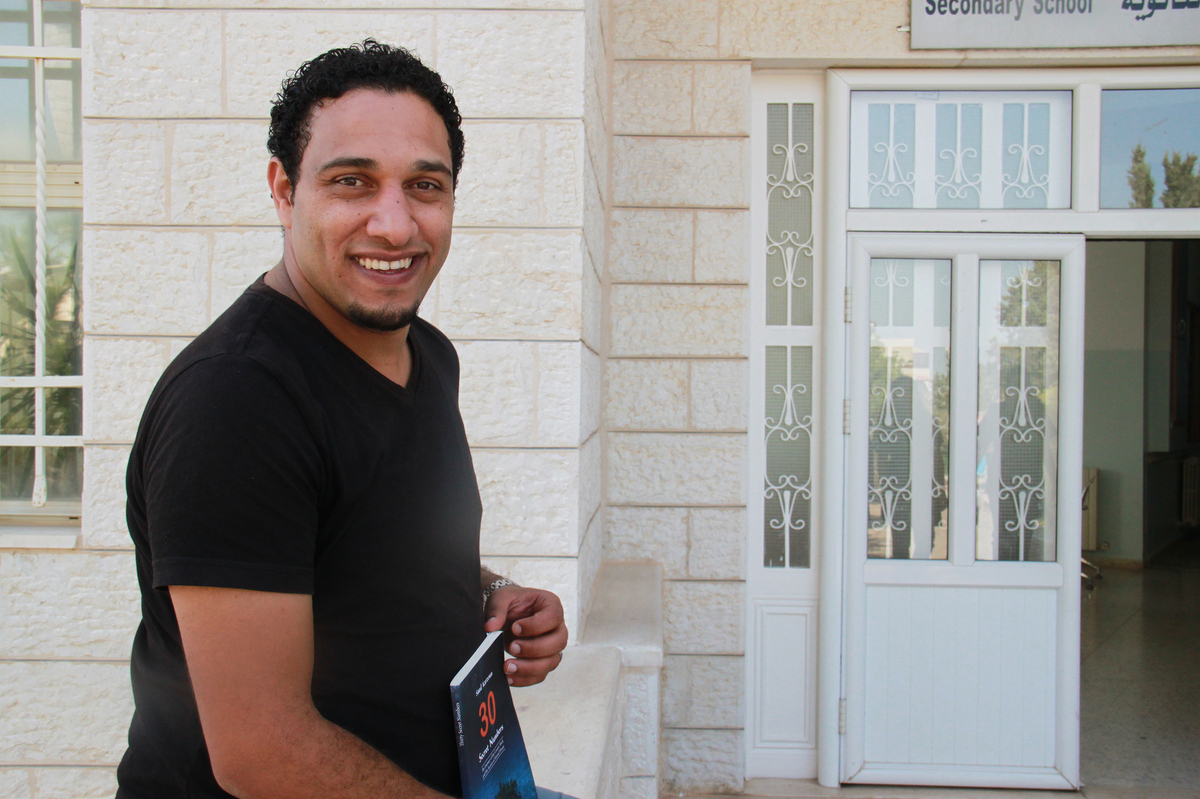 Palestinian Saed Karzoun, 31, is a motivational speaker who preaches positive thinking in the West Bank. He acknowledges it's a hard sell, with many Palestinians saying they are depressed about the present and pessimistic about the future.

All of it helped Karzoun style himself as a motivational speaker hoping to inspire his fellow Palestinians.

There isn't much optimism in the Palestinian territories these days. Unemployment is high. Morale is low. The peace process is frozen. Foreign aid to the Palestinians has dropped drastically in recent years. An independent Palestinian state is nowhere on the horizon.

And so, this gregarious 31-year-old with curly black hair and a small goatee is encouraging Palestinians to look inward.

"Let's do our best. And our best is about being a positive person. Productive. Helping others. Helping yourself," he said.

On a recent morning, after the school bell rang at the Arab Evangelical Episcopal School in the city of Ramallah, high school students took their seats in rows of metal folding chairs for a special assembly with Karzoun.

His talk revolved around a book he published last year, 30 Secret Numbers: The Journey of the Cosmic Rock and the Secrets of Mental Power. It tells the story of a Palestinian boy named Farhan who lives in al-Amari, a West Bank refugee camp near Ramallah.

Kids bully Farhan. They call him stupid, and he's convinced he's worthless. But then he travels to different galaxies, and things change. He meets Beethoven and Steve Jobs, and collects pearls of wisdom: to follow his heart, to persevere.

Karzoun says the book, a mix between Paulo Coelho's The Alchemist and the French classic The Little Prince, is about harnessing the power of one's mind.

"Almost every day," Karzoun writes in the introduction, "I receive messages from young men and women asking me, 'How do I develop myself so that I can land a job with a decent salary? How do I start my own project and fulfill my dreams? To whom should I turn for guidance and support in solving my problems? Why don't I get to travel like everyone else? What are the secrets to success? What do I do and where should I start? I feel frustrated in my own country.' These recurrent questions, and many more, are essentially what urged me to write this book." 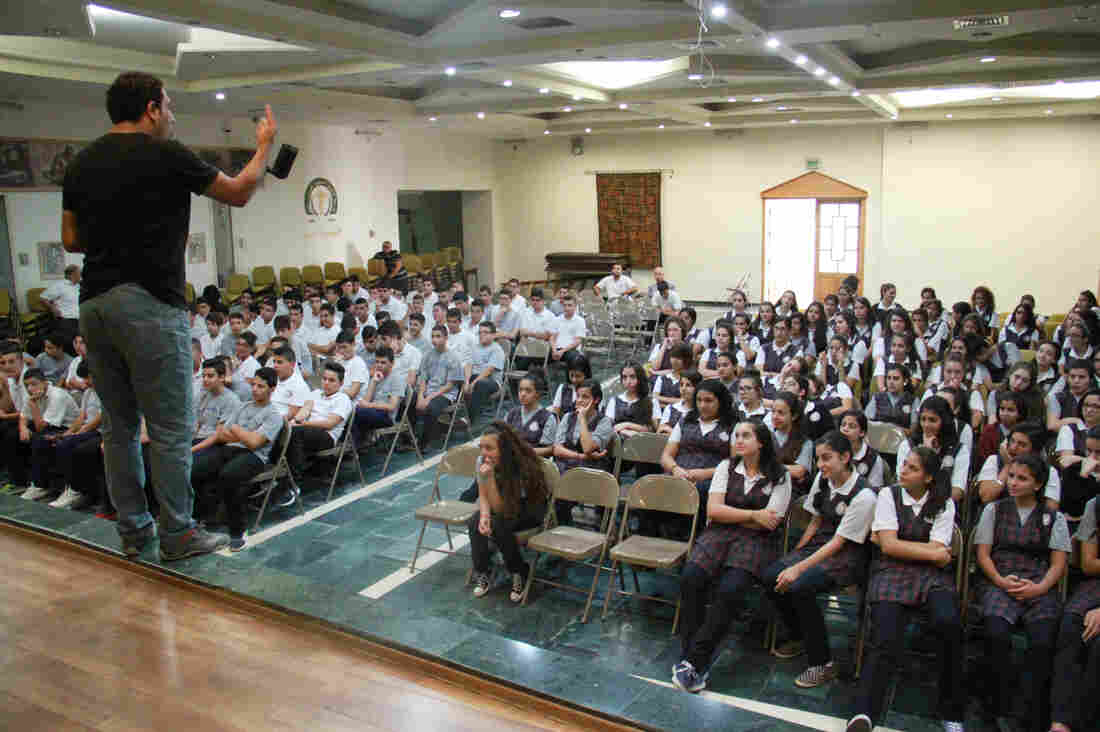 Karzoun speaks at a school in the West Bank. "People do not believe in peace anymore," Karzoun says. "But you need to at least to have peace with yourself." Daniel Estrin/NPR hide caption

30 Secret Numbers was released in Arabic in July 2015, and sold about 1,000 copies within a month and a half, Karzoun said. Most of the sales were in West Bank bookshops, but he said he also sent 100 copies of the book to the Gaza Strip for distribution. An English translation was published this year, and a French translation is expected to be out by early 2017.

The story of Farhan, the bullied main character, is the story of the author himself. Karzoun grew up going to school in the same impoverished refugee camp in the West Bank. His schoolmates used to tease him when he wouldn't throw stones at Israeli soldiers, and Karzoun was convinced he was weak.

"To be weak is a very dangerous thing in your future, and for your future," Karzoun said. "You will stay weak, until you decide and to tell yourself that I'm not. I am someone who can really do something."

In his twenties, Karzoun was an early adopter of YouTube, and would search the site for success stories about people who overcame bad circumstances, finding inspiration in the stories of Muhammed Ali, Michael Jordan and Martin Luther King, Jr.

He was especially drawn to the passionate video lectures of Les Brown, a leading motivational speaker whose catchphrases include "It's possible" and "You have greatness within you."

Like Brown, who worked hard to afford to buy a home for his adoptive mother, Karzoun did the same to help pay the mortgage on his parents' home. Karzoun is now studying the YouTube talks of inventor Elon Musk.

It's hard to find similar motivational speeches in Arabic online, Karzoun said. Arabic speakers looking for self-fulfillment will more often encounter videos of Muslim clerics promising a meaningful life only through the Koran.

In 2014, Karzoun founded the nonprofit group Taghyeer, Arabic for "change," which has received funding from a few international groups to help run seminars for youth that encourage activism and creative thinking through social media. He also broadcasts his message of positivity on his weekly radio show and to his Facebook following.

But it's a hard sell. The economy is stagnating, the Israeli military occupation continues, and there's Palestinian political infighting.

"You know what my challenge is? When I post something about positivity, always, people, they say, 'Saed, you are living in a different world. Saed, you're not from this society.' Everybody is negative," Karzoun said.

After Karzoun's talk, students applauded and filed out of the auditorium, but high school senior Bisan Khouri lingered behind.

She thanked Karzoun for his talk. She said she has her own share of frustrations: She and her friends are under pressure with their studies, and they have trouble finding opportunities to let off some steam. She says she feels cooped up in the West Bank, without an Israeli permit to go to the beach or travel in Israel, where she has relatives.

"I learned that I should never let my negative energy control me," Khouri said. "I should always think positively, think differently. If you work hard for anything, you can change it."

A school administrator said many of its students see a bright future for themselves only if they emigrate to the U.S., Canada or Europe. By inviting Karzoun to speak, the school hoped he could serve as a role model of someone who has achieved success while staying in the West Bank.

Karzoun said he's been invited to meet Palestinian Authority President Mahmoud Abbas soon, and that he has some advice for the leader: Go on Palestinian radio and inspire people, he said. Tell them: Yes We Can.

His focus on the personal – on bettering oneself – is different from the traditional Palestinian focus on the collective. Still, Karzoun believes it's a first step toward building a nation, even if peace with Israel seems like a distant prospect for Palestinians.

"People do not believe in peace anymore," Karzoun said. "But you need to at least to have peace with yourself."