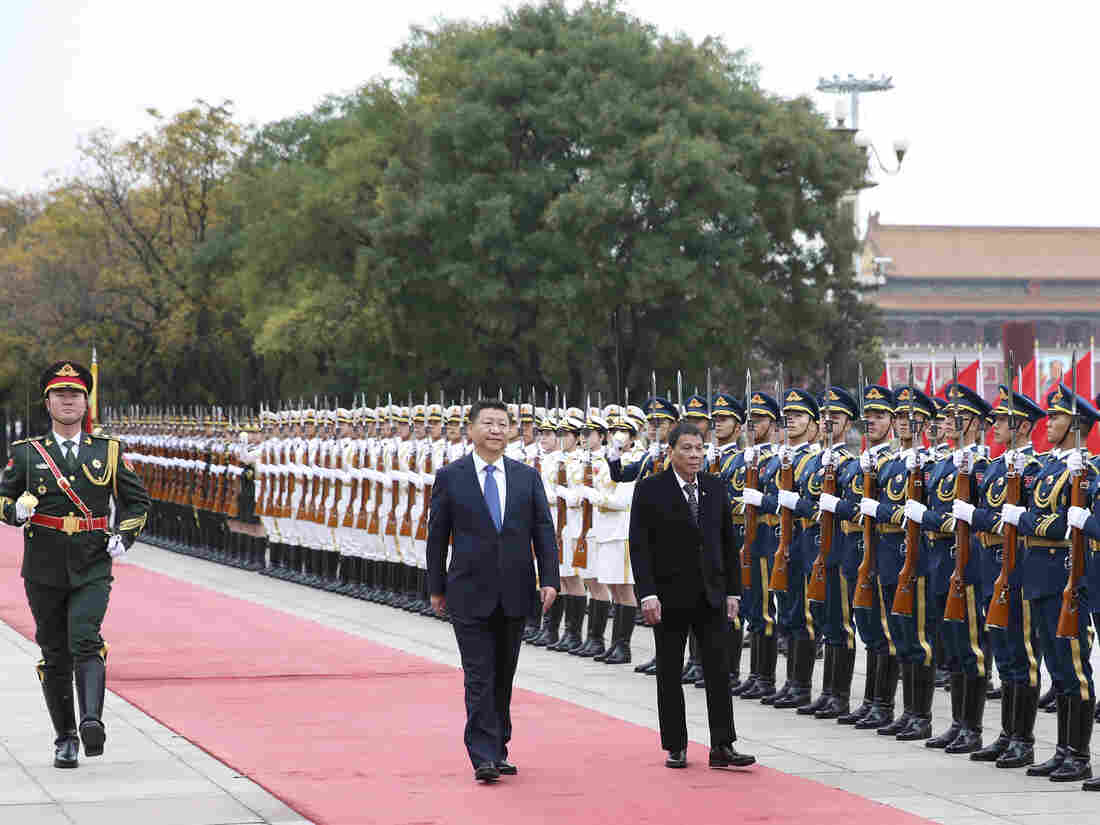 Chinese President Xi Jinping (center) holds a welcome ceremony for visiting Philippine President Rodrigo Duterte before their talks in Beijing on Oct. 20. In remarks during his visit, Duterte said, "I announce my separation from the United States. Both in military, not maybe social, but economics also." Xinhua News Agency/Xinhua News Agency/Getty Images hide caption 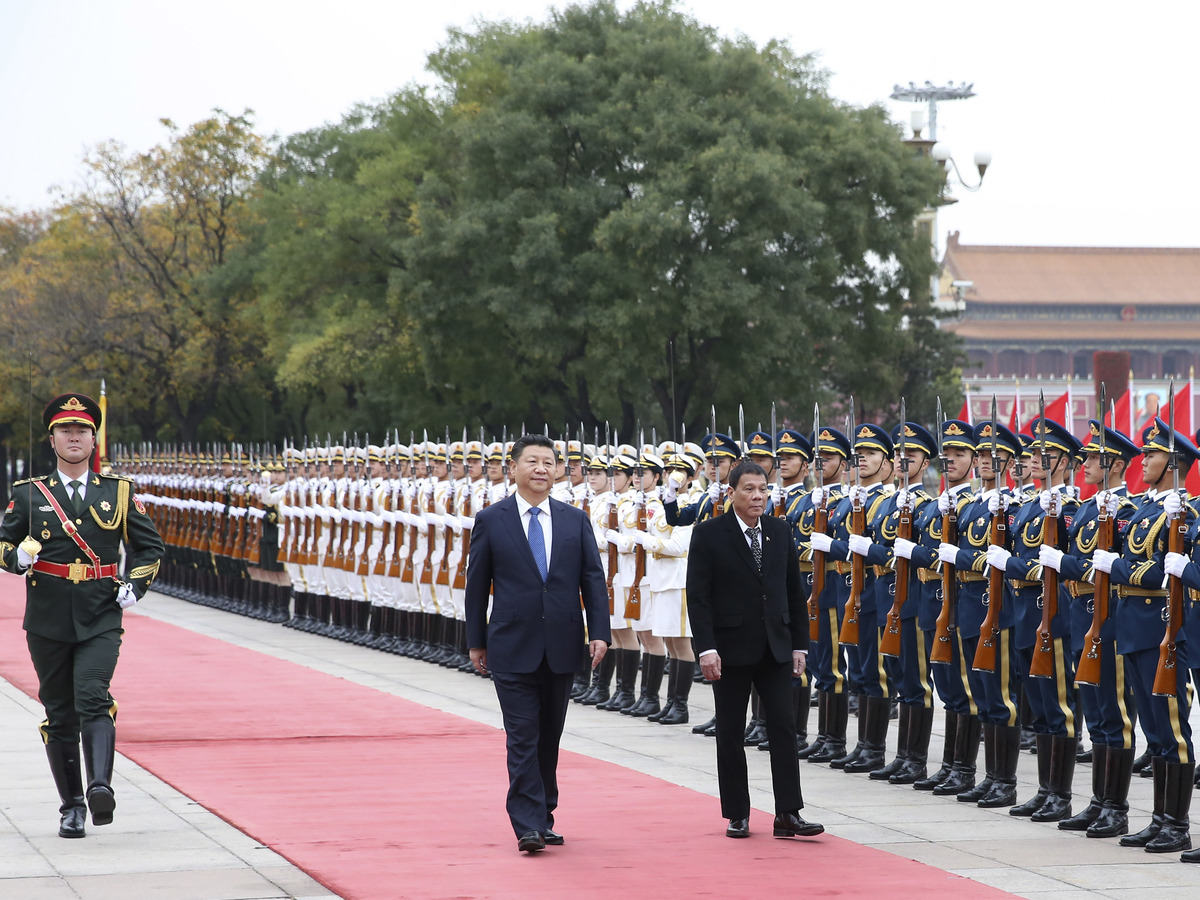 Chinese President Xi Jinping (center) holds a welcome ceremony for visiting Philippine President Rodrigo Duterte before their talks in Beijing on Oct. 20. In remarks during his visit, Duterte said, "I announce my separation from the United States. Both in military, not maybe social, but economics also."

Say this about Philippine President Rodrigo Duterte: He's not boring. Last week, on a state visit to Beijing, he dropped a bombshell during a speech to Chinese and Philippine business leaders about Manila's longtime treaty ally, the United States:

"Your honors, in this venue, I announce my separation from the United States. Both in military, not maybe social, but economics also."

His Chinese hosts were delighted to hear it, of course. But when he got home on Saturday, he walked it back.

"It is not severance of ties. When you say severance of ties, you cut diplomatic relations. I cannot do that," Duterte told reporters at a midnight news conference in his southern home city of Davao.

What he didn't say outright, but alluded to, is that the huge Philippine diaspora in the U.S. would turn on him in a heartbeat if he did. So he was unusually careful in his words.

He clarified that he meant "separation of my foreign policy" — which, he said, "need not dovetail [with] the foreign policy of America."

There's no doubt Duterte is trying to reset the Philippines' fractious relationship with China, a falling-out based largely on Beijing's recent territorial moves in the South China Sea. But there's also little doubt that Manila's relationship with Washington is on the rocks — and not just because of U.S. criticism of Duterte's war on drugs, which has left more than 3,000 dead since the president took office in June.

Harming — or rebooting — a relationship?

There's a growing sense among Filipinos that the decades-long relationship between the U.S. and its former colony is seriously one-sided — condescending, even. And it needs a reboot.

"So it is in this context that I am asking our American friends and American leaders to look at our aspirations. We cannot forever be the little brown brothers of America," Foreign Affairs Secretary Perfecto Yasay said in a speech last month at the Center for Strategic and International Studies in Washington.

Over the weekend, he tried to do damage control on what Duterte had wrought in Beijing. Yasay wrote on Facebook that it did not mean destroying alliances and making enemies, and "does not mean severance of relationship or terminating the special bond between our two nations, which remains firm notwithstanding the formidable but surmountable challenges that we face in making liberating change happen."

The relationship is undeniably complicated.

"Today, it is a reality that we are no longer your little brown brothers," she says. "That may have been true decades [ago]. But today, we deserve to be treated well, considering the geographic position, the strategic position, of the Philippines in Asia."

That geographic and strategic position is astride the region's major waterway, through which billions of dollars of good pass every year.

Many Filipinos, including President Duterte, also don't believe the U.S. will bail Manila out if push comes to shove with China, says political scientist Richard Javad Heydarian, author of Asia's New Battlefield: The U.S., China and the Struggle for the Western Pacific. In July, a Hague tribunal rejected China's claims to most of the South China Sea, ruling in the Philippines' favor. But China has said it would ignore the ruling.

"A growing number of people have come to believe U.S. commitments to the Philippines in the South China Sea is very much limited," Heydarian says. "Never clarified whether Philippines claims in South China Sea, including Scarborough Shoal, is covered in [the] mutual defense treaty between the two countries."

That treaty — which dates to 1951 — requires each country to come to the other's aid if attacked by a hostile force. But the parameters of such a response are open to interpretation.

Now, many think the Philippines — the largest recipient of U.S. maritime security aid in Southeast Asia — is getting shortchanged by Washington in terms of military assistance, Heydarian argues.

Those other countries, says Dindo Manhit of the Albert Del Rosario Institute, a Manila think tank, get sophisticated U.S. weaponry such as tanks and fighter jets. Meanwhile, the Philippines gets 50-year-old decommissioned Coast Guard frigates and other hand-me-downs, he says.

When he asks U.S. policymakers about it, "The only unofficial answer I get is, 'You're not ready.' So the Middle East countries are more ready than us? So maybe it's really that Duterte is right, that we have not been treated well in this relationship."

Still, it would be wrong for Duterte to go all-in with China, Manhit says.

"He's so fascinated by the idea of [a] stronger economic relationship with China, without realizing [the] U.S. is our No. 2 trading partner," he says. "Our country is driven by remittances, consumption-based economy. Forty percent of that comes from the United States, Filipino-Americans, Filipino migrants there, sending back home. So why set aside the core relationship that helps this economy by saying China can do this?"

Duterte needs to be careful not to get too close to China too soon, Manhit warns — or his record public approval rating, this month at 76 percent, will tank in a hurry.