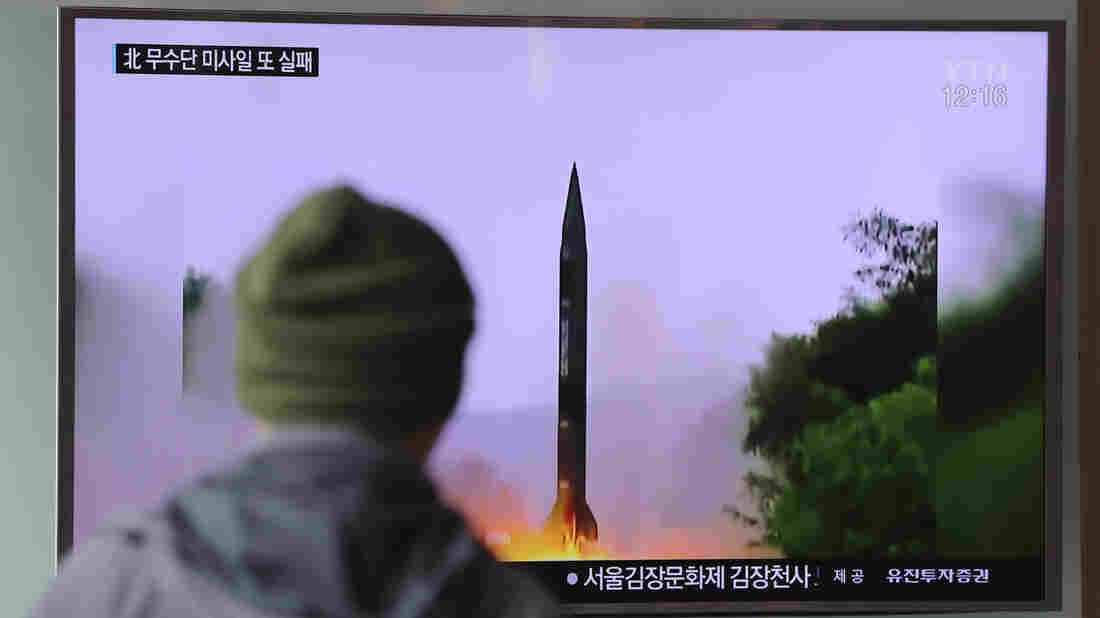 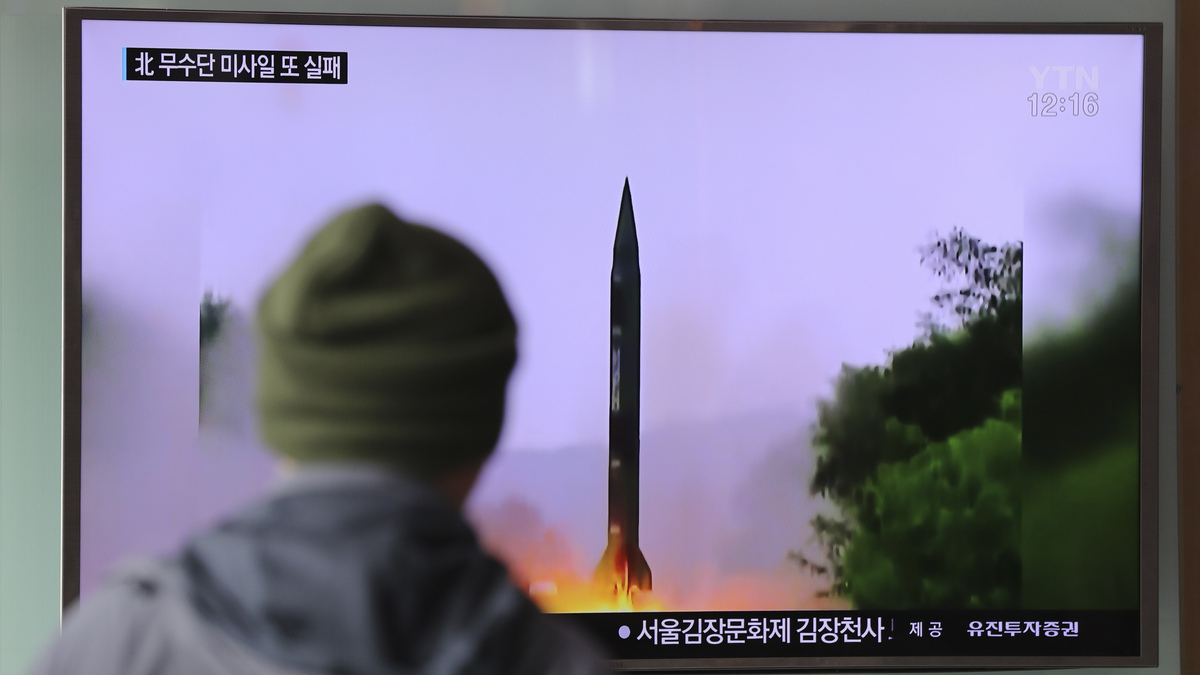 A man watches a TV news program showing a file image of missile launch conducted by North Korea, at the Seoul Railway Station in Seoul, South Korea, on Oct. 20. The U.S. military said it detected a failed North Korean missile launch that day. The U.S. Strategic Command issued a statement late Wednesday saying it presumed the missile was a Musudan intermediate-range ballistic missile.

They settled themselves into tan, leather armchairs and fielded questions, including this one: Name a global flashpoint you're looking to with concern?

"North Korea," came the reply from one. "And how the United States and China deal with that situation."

The exchange is worth noting because the three people on stage were current or former CIA officials.

The one who gave the North Korea answer? Dennis Wilder, who has spent his career grappling with North Korea, including from senior perches at the National Security Council and the CIA. The occasion was a rare, public conference on intelligence, hosted by the CIA and George Washington University on Sept. 20.

"The (U.S.) president-elect is going to face a problem from North Korea that none of his predecessors — or her predecessors — have faced," says Jami Miscik, former CIA deputy director for intelligence. "It is well on the way to becoming not just a nuclear power, but a power able to deliver a nuclear missile."

Miscik, who today serves as co-CEO of Kissinger Associates and co-chair of the President's Intelligence Advisory Board, was speaking last week at Fortune's Most Powerful Women Summit.

"North Korea is one of the issues we aren't paying enough attention to," she said. "The fact these rocket launches are failing shouldn't give anybody comfort, because they're not failing for the same reason — they fail and they fix that thing. It might fail for another reason, but they're advancing in terms of their capability."

Elbridge Colby, a former Pentagon official now at the Center for a New American Security, says it's already worrying that an unpredictable, isolated regime like North Korea has nuclear weapons.

"But it's another whole level when you get a ballistic missile that can travel very fast and is hard to intercept, and can reach not just South Korea and Japan but the United States itself. And that's the real game changer," said Colby.

Does he take heart from the fact that North Korea's tests often fizzle or outright fail?

"Not really. Because it depends on what you're trying to do," he said. "You may be trying to test the edges of your capability, and you can still also get data from your failed tests."

"What we're seeing now is an unprecedented level of activity," he said.

Wilder believes that North Korea is on track to be able to strike the continental United States with a nuclear-armed missile within the next five years. And that may not even be the worst news.

In an interview in his office at Georgetown University, where he's now a professor, Wilder noted that North Korea today is believed to have enough fissile material for somewhere between 10 and 20 nuclear weapons.

"A new Rand study says he could have 50, by 2020. That is scary," says Wilder — and not just because North Korean leader Kim Jong-Un would have so many at his disposal. The truly frightening prospect, Wilder argues, is that Kim might decide to export.

"I was in the Bush White House [in 2006] when we found out that the North Koreans had sent nuclear technology to Syria," he said. "It was a shock to the entire world. I don't want to have the same lack of imagination on this issue."

Wilder argues that the only path forward is persuading China to use its leverage. He also jokes that North Korea is "the land of lousy policy options."

At the Council on Foreign Relations in New York on Tuesday, the director of U.S. national intelligence, Jim Clapper, argued that it may well be a "lost cause" to try to persuade North Korea to give up its nuclear weapons.

"They are not going to do that," he said. "That is their ticket to survival."

"The best we could probably hope for is some sort of a cap, but they are not going to do that just because we ask them. There's going to have to be some significant inducements," said Clapper.

Meanwhile, in New York, the United Nations Security Council is drafting new sanctions in light of the latest nuclear test.

From Pyongyang, the Ministry of Foreign Affairs has already shot back: "It is a complete miscalculation to think that sanctions or pressure can have any effect on us."