Accessibility links
Europe's Aid Plan For Syrian Refugees: A Million Debit Cards : Parallels The European Union is giving the cards to Syrian refugees in Turkey. It's a massive project that will provide about $30 a person per month to the struggling families. 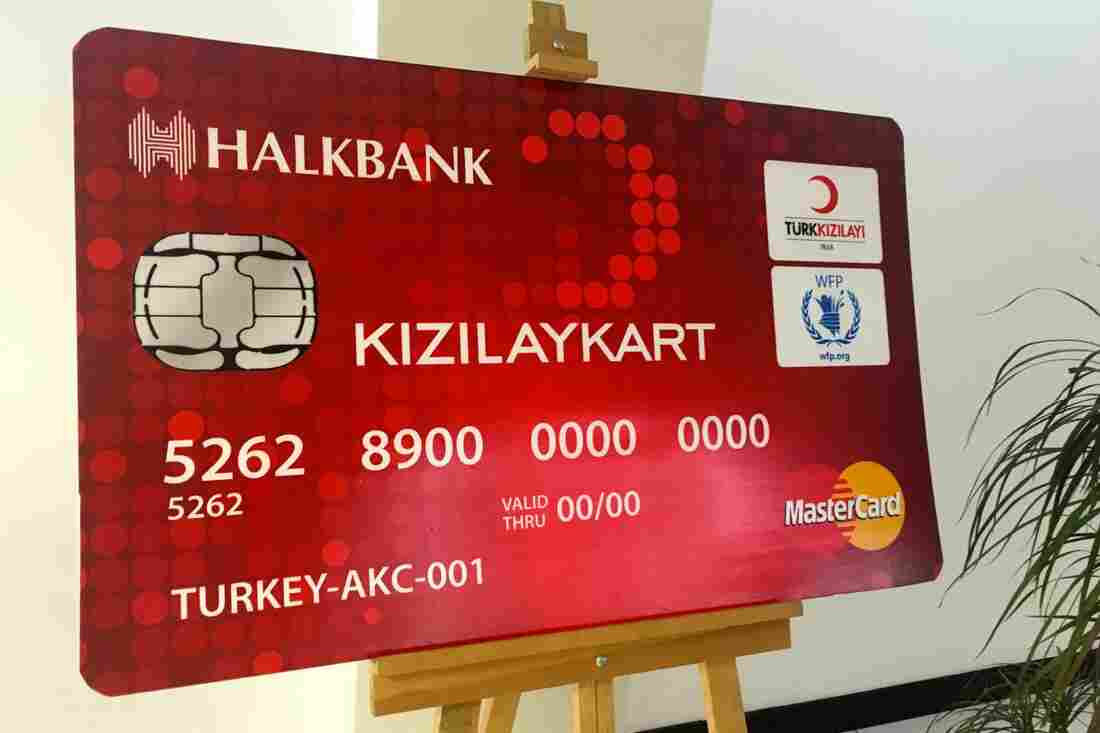 The debit card the European Union is funding for 1 million Syrian refugees in Turkey, shown in a mock-up, would provide about $30 per person per month to each family member. The idea is to help the refugees in Turkey and keep them from going to countries in Europe. Gokce Saracoglu for NPR hide caption 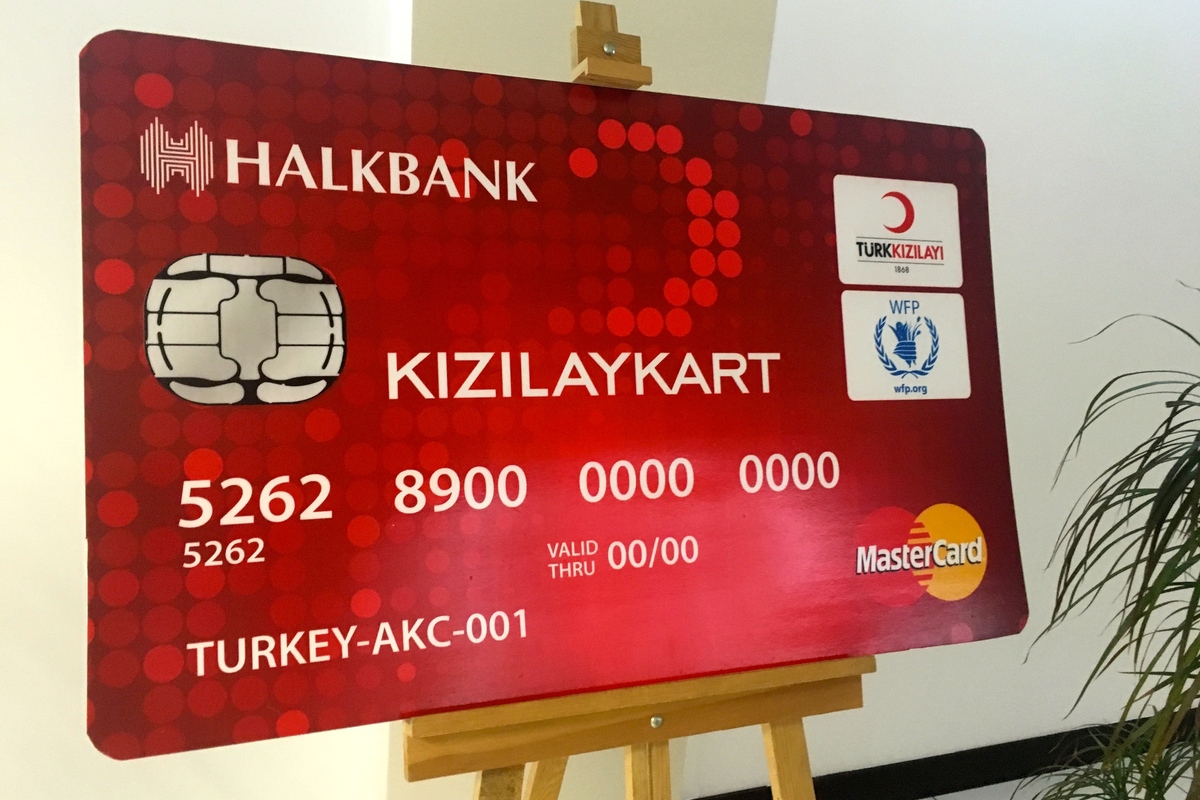 The debit card the European Union is funding for 1 million Syrian refugees in Turkey, shown in a mock-up, would provide about $30 per person per month to each family member. The idea is to help the refugees in Turkey and keep them from going to countries in Europe.

The European Union is desperate to keep Syrian refugees from bolting from Turkey for Europe. But the prospects for Syrians in Turkey have been slim. Now the EU is launching its biggest aid program yet — more than $375 million aimed at a million of the neediest Syrians in Turkey.

And it's not bags of rice thrown from the back of a truck. It's a bit more modern: a debit card that can be used to buy whatever food, medicine or clothing a family needs, or to get cash.

It's called the Kizilay card, named after the Turkish Red Crescent, one of the key aid groups launching the project, along with the United Nations World Food Program.

At the Red Crescent's Ankara headquarters, Director General Mehmet Gulluoglu says the card used to be limited to refugees living in camps, and allowed them to buy food at nearby shops.

But Gulluoglu says this new program offers something else: Refugees outside the camps — which are most of them — will be able to take these cards to an ATM and get cash, up to 100 Turkish lira a month, or about $30 for each registered family member. 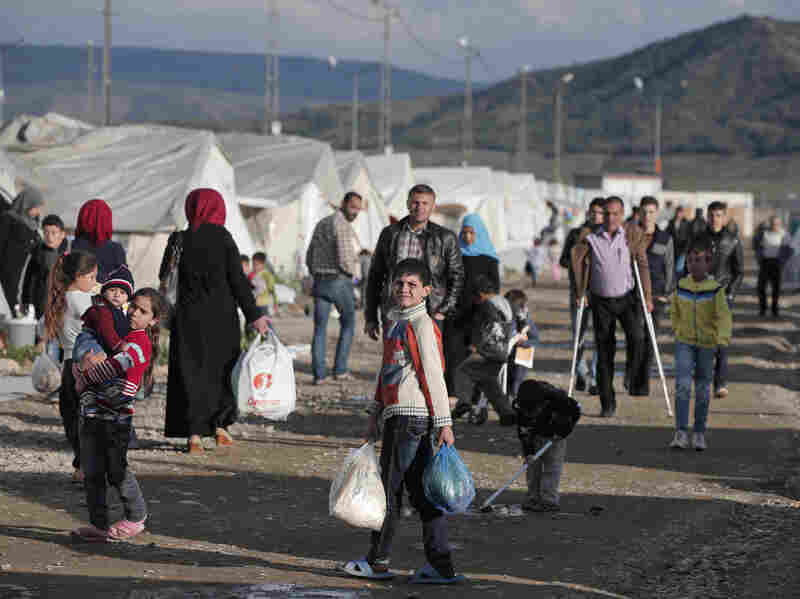 Aid via debit card has already reached Syrian refugees living in Turkish camps like the one at Islahiye, shown here in March 2016. The new program will reach refugees living outside camps. Lefteris Pitarakis/AP hide caption 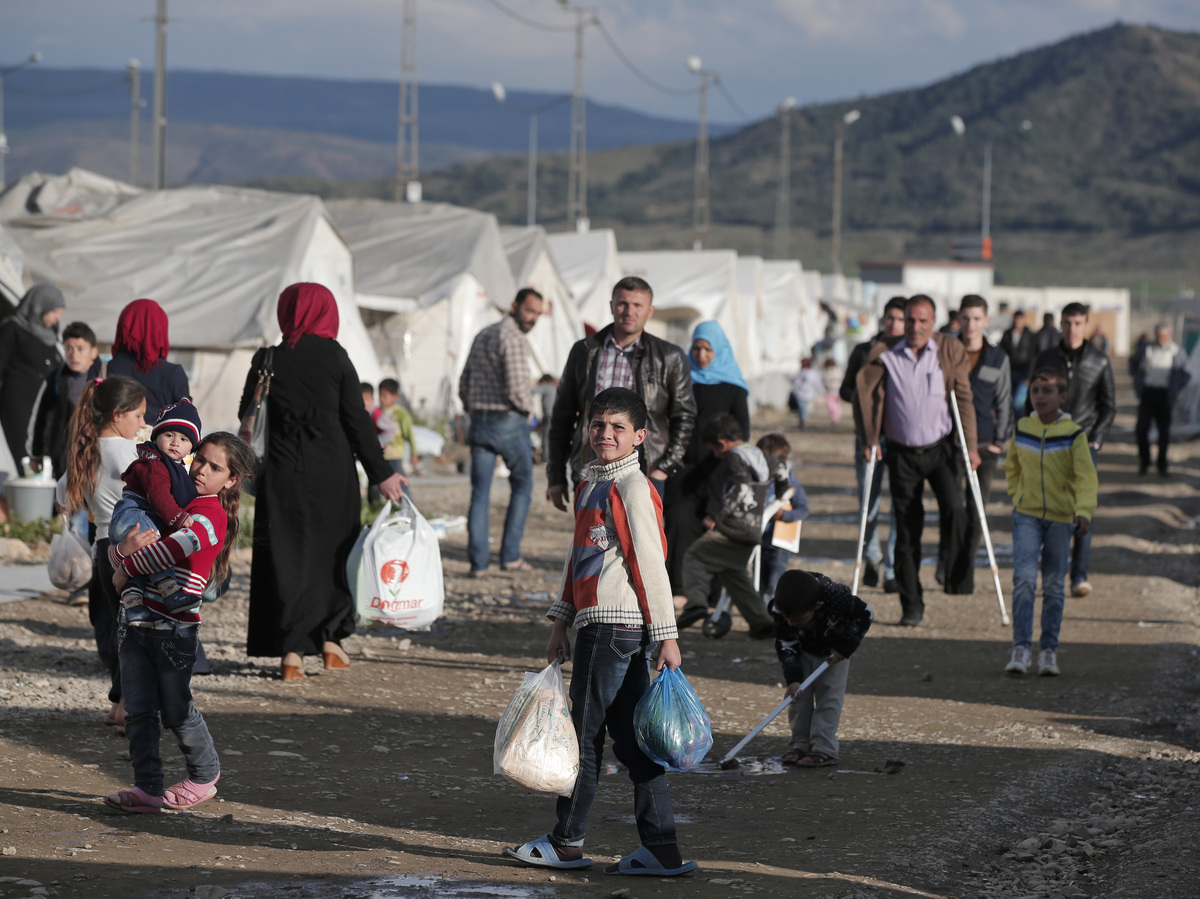 Aid via debit card has already reached Syrian refugees living in Turkish camps like the one at Islahiye, shown here in March 2016. The new program will reach refugees living outside camps.

"They can pay their rents, pay their bills or for food, whatever they need," he says. "Because it will be certain, it will be concrete and it will be regular support."

It will also be spent on local businesses. There have been cash-based aid programs before, but not on this scale. Jonny Hogg, spokesman for the World Food Program, says this is the biggest humanitarian relief contract ever signed by the EU. It aims to help refugees not just survive but also have a tiny bit of control over their lives again.

"These refugees, who've had their entire existence turned upside down — by conflict, by poverty by displacement — how can we give them a sense that actually, they're real members of society, they're not second-class citizens?" he asks. "And we believe that we're giving them the ability to choose how they live their lives."

Syrians in Turkey are supposed to stay where they're registered. They can rent property if they can afford it, work if they can find a job, and can be eligible for health care and education. But as a practical matter, the demand usually outstrips the supply. Turkey's ambassador to the U.K. recently wrote that there are around 853,000 school-age children, 310,000 of which are eligible to receive education.

There are some parts of Istanbul you can wander into where you might think you'd crossed a border without noticing.

On a recent Sunday morning, the raucous horns, drums and cries of a Syrian wedding echoed off the modest apartment blocks in the working class neighborhood of Bagcilar. A young Syrian woman named Jazia is guiding me to her family's small apartment.

Her mother, Haifa, greets us and waves us into a small sitting room with cushions on the floor, Middle East-style. We're not using their family name because Haifa's husband is still in Syria.

Jazia says her family made three failed attempts to reach Greece by boat that left her terrified of the ocean. In the end, only two older brothers made it to Germany. Jazia, her 20-year-old brother and a sister who's just 15 spend 12-hour days at a shirt-making factory to keep the family afloat. Only Mohammad, 11, smiling shyly in the corner, is still in school — for now, at least.

Their mother, Haifa, looks with interest at a photo of the new EU debit card. It doesn't exist in Istanbul yet. A pilot program has started down near the Syrian border, in part to look for potential problems. For instance, how many people are spending the cash on cigarettes and lottery tickets?

How much will it help?

Some supporters have already pointed to an obvious issue: Despite the program's admirable reach, aiming to help a million of the neediest Syrians in Turkey, how much help can they really get from 100 lira, just over $30 a month?

Hogg, the WFP spokesman, says in some cases, quite a lot: "I've met refugees who are living in caves because they can't find anywhere else to live. They've spent the winter living in caves. A hundred Turkish lira is going to make a profound difference to these people's lives."

As with so much of the international response to the refugee crisis, this program is hugely ambitious — and yet not enough.

Jazia and her family would love some extra financial help, but they doubt they'll qualify for the EU cards. Poor as they are, with three people working long hours for very low wages, they're still better off than many other families.

But if they did somehow qualify, the extra cash might just help them keep her 11-year-old brother in school, instead of adding him to the Syrian child labor force in Turkey.

When I asked Mehmet Gulluoglu, the Turkish Red Crescent director, if $30 a month is enough, he replied with a tight smile: "It's a start."