Accessibility links
U.S. Envoy: China Will Be 'More And More In Our Future' : Parallels Max Baucus, the ambassador to China since 2014, urges the U.S. to "draw some lines" and says, "We're not going to get bullied." Despite recent tensions, he remains upbeat about U.S.-China ties. 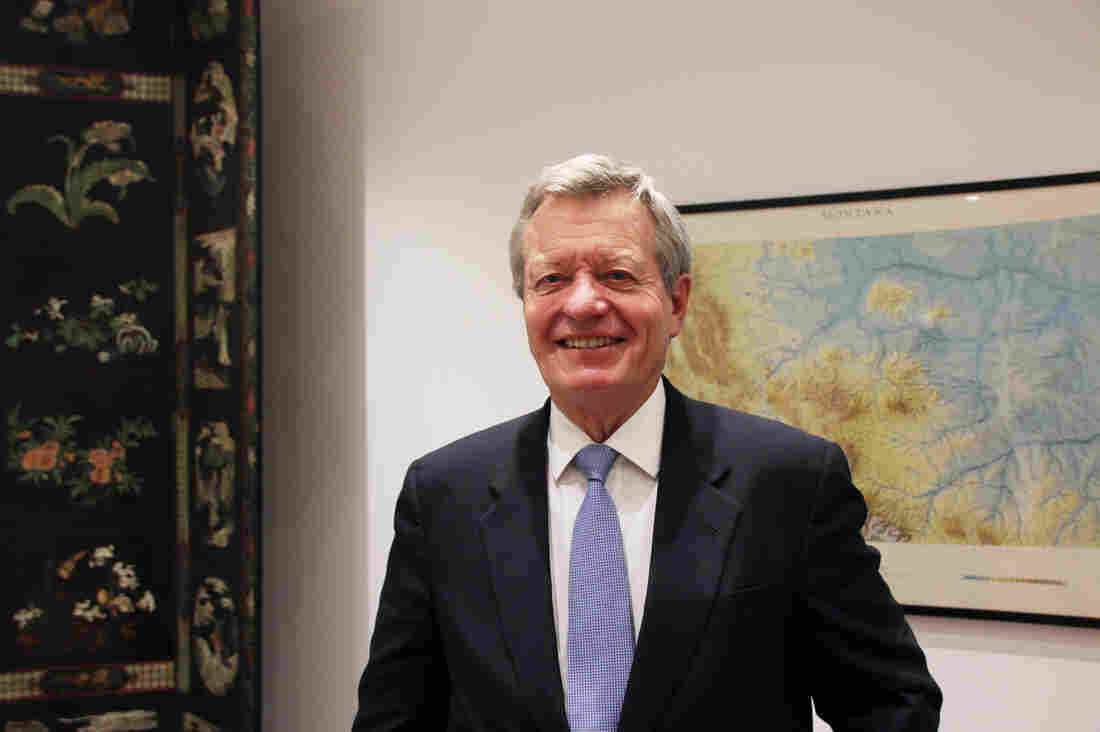 U.S. Ambassador to China Max Baucus, a former Montana senator, recently became the first American envoy to China to visit all of the country's provinces. "We Americans have an obligation to come to China, to learn more about China," he tells NPR. "Why? Because with each passing day, it's going to be more and more in our future." Anthony Kuhn/NPR hide caption 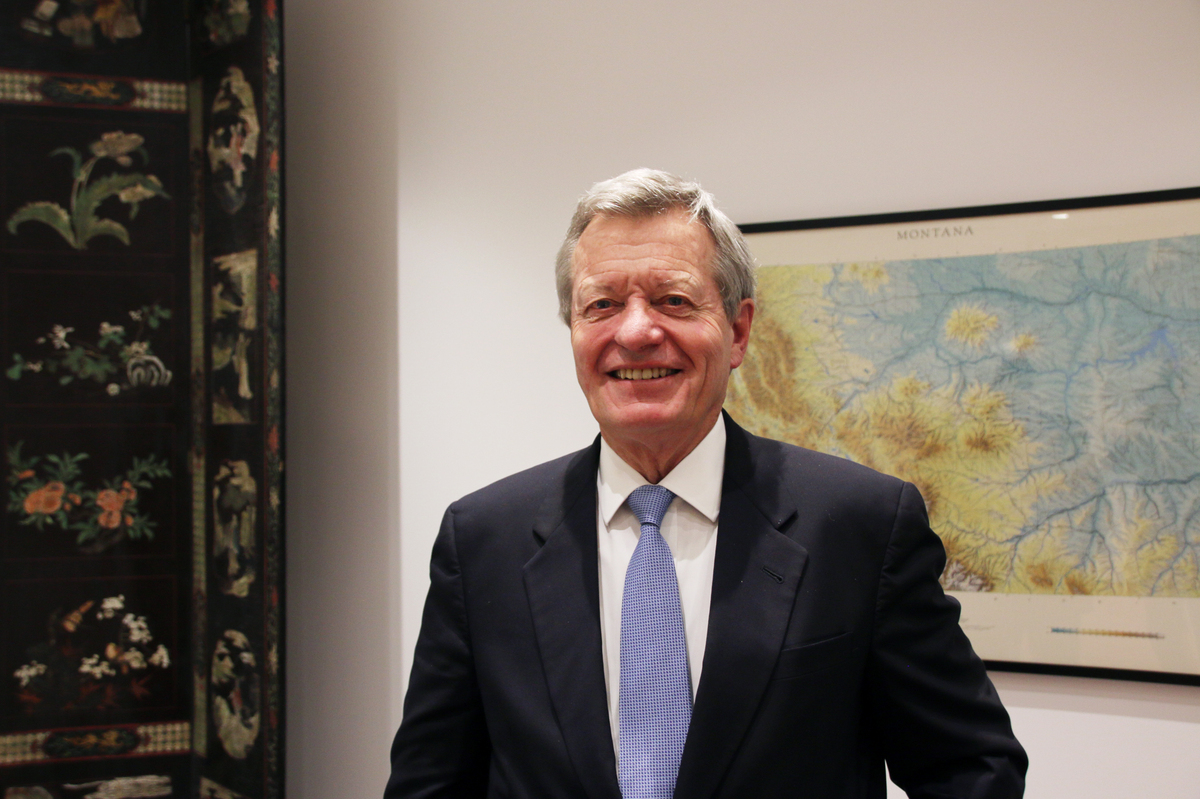 U.S. Ambassador to China Max Baucus, a former Montana senator, recently became the first American envoy to China to visit all of the country's provinces. "We Americans have an obligation to come to China, to learn more about China," he tells NPR. "Why? Because with each passing day, it's going to be more and more in our future."

The past couple of weeks have seen U.S. and Chinese warships holding maneuvers in the South China Sea, and the president of a country that's a U.S. treaty ally, the Philippines, snubbing the U.S. and aligning himself with China.

Some observers see all of this as a blow to the U.S. strategic position in Asia, and further evidence of a looming showdown between the U.S. and China.

U.S. Ambassador to China Max Baucus, however, remains upbeat about the relationship.

Baucus, a long-serving Democratic senator from Montana before he became a diplomat, tells NPR he remains sanguine that confrontation can be averted "so long as we're very constructive and show China that, hey, we want to work with you, but we're not going to let you push us around."

In an interview at his office in the U.S. Embassy this week, Baucus said he sees a silver lining in the Philippines' recent realignment.

"Duterte and the Philippines, by making overtures to China, has actually, in a strange way, helped cool things off here because China's trying to figure out who is this guy, what's he all about?"

Washington and Tokyo appear to be just as perplexed, and have been seeking clarification on Duterte's Oct. 20 proclamation in Beijing of his "separation from the U.S."

But Duterte, says Baucus, is "a small bit player, frankly — not to denigrate him personally — in the whole larger geopolitical challenge that the U.S. and China have together."

Dispute in the South China Sea

That challenge has focused on the South China Sea, where Baucus feels "China was pushing out too strongly." His message to China as tensions ratcheted up in the past year or so: "Cool it. Don't be too disruptive here. Don't do something nutty."

Something, for example, like building and fortifying Scarborough Shoal, a strategic sandbank claimed by both the Philippines and China.

At a conference in Singapore in June, Defense Secretary Ash Carter warned China that building on Scarborough Shoal would trigger an unspecified U.S. response and end up isolating China.

Baucus says the Chinese appear to have listened — for now.

"We've got to stand up for ourselves," he says. "That is, draw some lines, make it clear that after awhile, we're not going to get bullied or pushed around, because I think there are some in China who want to push the United States around. They want to bully us."

From Beijing's perspective, the visit by Duterte earlier this month cleared the air of pressure from a July ruling by an international tribunal that invalidated China's claims in the South China Sea, says Jin Canrong, a People's University international relations expert. The Hague tribunal ruled in the Philippines' favor.

Baucus says the U.S. needs to show leadership by building rules and institutions in Asia, such as the Trans-Pacific Partnership, a multinational trade deal. The TPP faces stiff opposition in Congress, and from both U.S. presidential candidates.

China, Baucus notes, is promoting an alternative trade pact that excludes the U.S. and sets lower standards for its members on labor, the environment and other issues.

To avoid conflict in the future, Chinese and Americans both need to think more deeply and creatively about their relationship, Baucus says. That means becoming more familiar with each other.

"We Americans have an obligation to come to China, to learn more about China," he argues. "Why? Because with each passing day, it's going to be more and more in our future."

As of last week, Baucus became the first U.S. ambassador to China to visit all of its regions and provinces. He attended the Ice Festival of northern Harbin city, and visited the palm-fringed southern island of Hainan and the big-sky country of the Tibetan plateau.

"It's almost impossible to describe. It's a mosaic, it's a kaleidoscope," he says of the country's vast diversity.

Mostly, Baucus says, he enjoys his job because of Chinese people, who he says share a can-do spirit and straight-talking style admired by Americans.

Even within China's notoriously opaque bureaucracy, Baucus says he has cultivated some guanxi, the Chinese term for personal connections.

"I have, I would say, about five or six people in government here who I can go to, and I call them up and say, 'Hey, I need some help on this.' "

They're not major issues, he adds, but they get resolved. For example, he was able to get the website of the U.S. National Park Service unblocked after it became inexplicably inaccessible in China.

Baucus says he likes to prod his Chinese counterparts to veer away from their talking points that are so monotonous, they sound to him like a Senate filibuster.

Chinese officials sometimes do "go off script, but they've memorized the script so much that they know what they're going to say anyway," he says. "But yes, they do engage."

Whether Baucus will stay on and continue to engage with China's government and people will be up to President Obama's successor.

The audio version of this story mistakenly characterized Ambassador Max Baucus as saying the Philippines plays a minor role in the South China Sea dispute. His actual words were that Philippine President Rodrigo Duterte is "a small bit player, frankly — not to denigrate him personally — in the whole, larger geopolitical challenge that the U.S. and China have together."