Accessibility links
The Nightmarish Conditions For Drug Suspects In Philippine Jails : Parallels Some 730,000 suspected narcotics users and dealers have turned themselves in or been arrested since the president announced his war on drugs. They've overwhelmed the country's jails.

Listen · 3:58 3:58
The Nightmarish Conditions For Drug Suspects In Philippine Jails 3:58 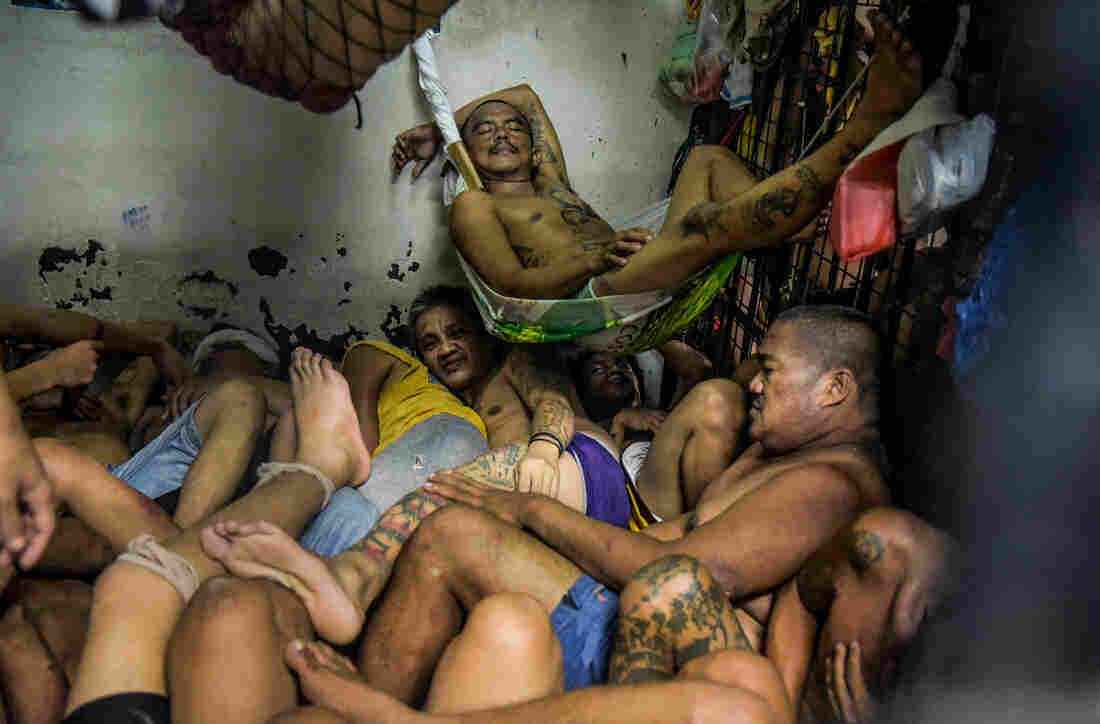 Prisoners sleep inside one of the overcrowded jails in the Tondo district in Manila, Philippines. More than 700,000 suspected narcotics users and dealers have been arrested or turned themselves in since President Rodrigo Duterte announced his war on drugs four months ago. The suspects have overwhelmed the country's jails. Alecs Ongcal hide caption 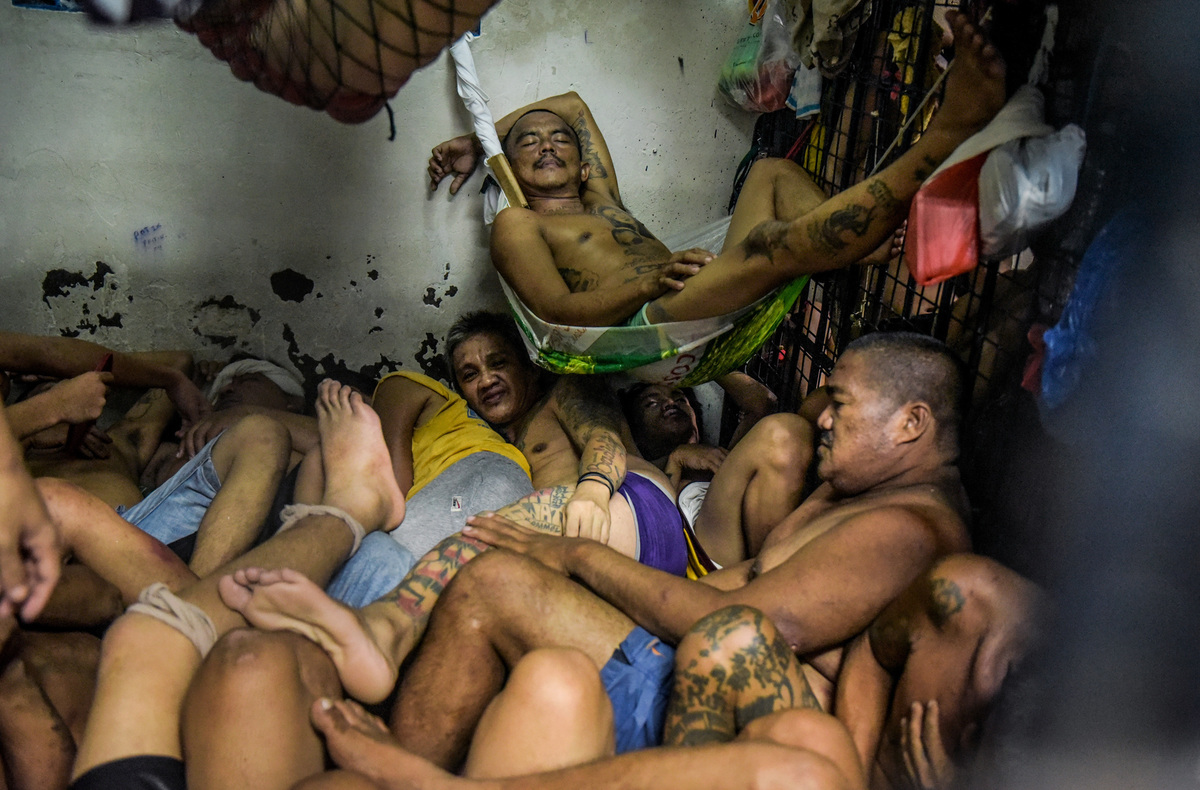 Prisoners sleep inside one of the overcrowded jails in the Tondo district in Manila, Philippines. More than 700,000 suspected narcotics users and dealers have been arrested or turned themselves in since President Rodrigo Duterte announced his war on drugs four months ago. The suspects have overwhelmed the country's jails.

It's about 11 p.m. and Raxabago Police Station No. 1 is busy. And hot. The air conditioner over the door is failing miserably.

The station is in Tondo, Manila's most densely populated district, and home to some of the city's most notorious slums. And in the wake of President Rodrigo Duterte's 4-month-old war on narcotics, suspected drug users and dealers find themselves jailed in growing numbers.

"It depends on the operation. Sometimes there are 10, sometimes more, sometimes 20," says Chief Inspector Robinson Maranion.

And that has created a problem. A sign on the holding cell door reads "Maximum Occupancy 45 Males."

But on the October night when I visited, more than 100 suspects were crammed inside. They were packed so tightly, some were literally hanging from the walls and ceiling in hammocks. It's so packed, the men have to sleep in shifts.

Nationwide, some 730,000 suspected narcotics users and dealers have turned themselves in or been arrested since the president took office at the end of June and announced his war on drugs.

Most of the users who surrender are sent home. But some remain, and they and the suspected dealers have overwhelmed the country's jails.

In theory, the suspects in Tondo are supposed to be moved from this station to the city's central jail within days or weeks. But the sheer numbers are causing the system to break down. Getting transfer papers processed is rare, says Maranion. Some of the men in this holding cell have been here three months, he adds.

But he's going to have to wait. Everyone will have to wait, according to Duterte, who sparked the influx of drug suspects when he told users and dealers to turn themselves in after he came to power in June. 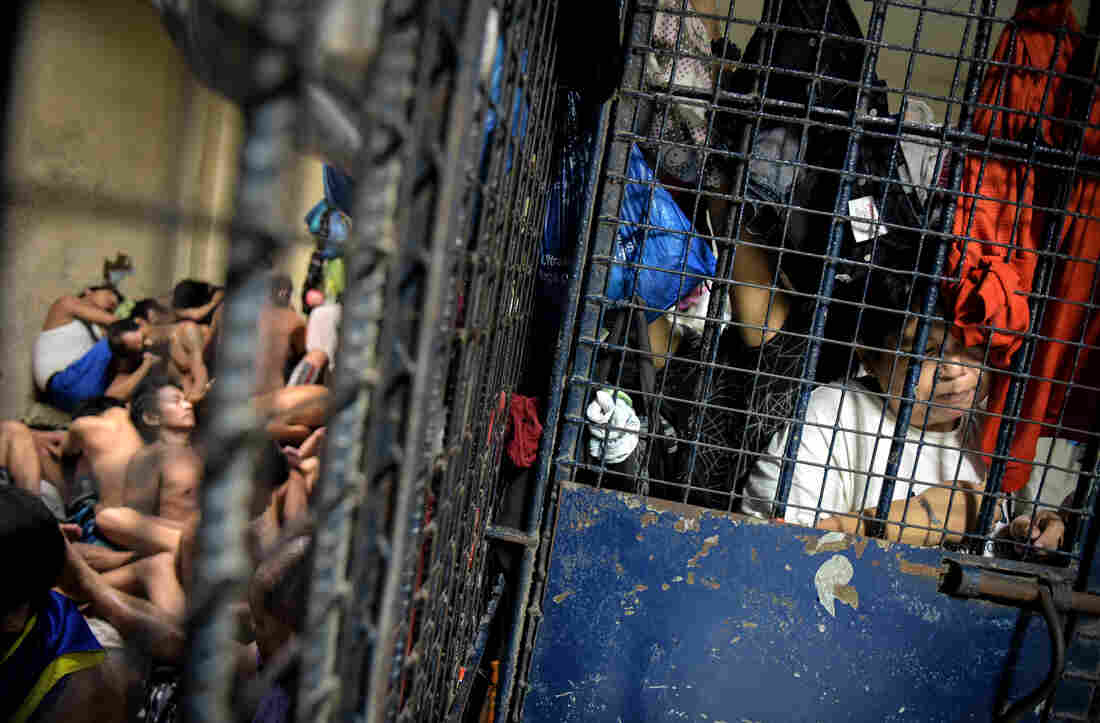 Suspects jailed in Manila's Tondo district are packed so tightly that the men sleep in shifts. Alecs Ongcal hide caption

"I am operating on a budget that was prepared ... the previous year," Duterte told me at a press conference in October. "Just like in any country, you prepare the budget now for next year's implementation. You know, we do not have the money."

Nobody expected so many drug users would surrender so quickly.

"Of course we were caught unaware," says Philip Vera Cruz, who heads the legal division at the government's Dangerous Drugs Bureau. "Because an anti-drug abuse program was not a priority of the previous administration. So we have a lot of catching up to do."

One of the biggest problems facing this administration is treatment programs for the worst-off. In a country of more than 100 million, there aren't nearly enough residential treatment options.

There are 44 accredited rehabilitation centers nationwide, with just 3,216 beds, according to Vera Cruz.

Dr. Alvin Regada, head of intake at one of the government-accredited centers, estimates that the country needs 100,000 beds for inpatient treatment — or perhaps even more.

At Regada's treatment center in Quezon City in Metro Manila, all 150 beds are full.

"We have a lot of drug dependents from Quezon City who want to be rehabilitated now but can only accommodate so much, so have to limit our admissions," Regada says.

Only doctors specifically accredited by the Department of Health are allowed to make a diagnosis of drug dependency, and there is a shortage of these doctors, he adds.

"I think it's only less than 200 physicians who are [Department of Health] accredited who will handle and evaluate all these drug dependents now," he says.

But Vera Cruz of the Dangerous Drugs Bureau insists more of everything is on the way. The new budget for treatment programs is five times larger than what it was in the last administration.

"The Congress has ensured that the programs of the president should be properly budgeted for next year," he says. "We'll just try to make do with what's available."

For now, that means relying on outpatient clinics and other informal, religious or community-based programs — and, of course, the Zumba classes the police hold each week for many of those who surrendered.

One recent bright spot: Duterte's new best friend, China, has ponied up the cash to help complete a 15,000-bed treatment center that was already under construction.

For now, there aren't other options. That means government centers like Regada's have to turn people away.

Even so, he's still a proponent of the president's war on drugs. Close to 2,000 suspected drug dealers have been killed in encounters with police over the past four months. And that number doubles when you add unexplained killings that human rights groups blame on vigilantes, the police or both.

But "the aggressiveness and enthusiasm regarding everything concerning the drug menace, I think, is better in this administration," Regada argues. "At least the government is doing something. Not like previous administrations, where drug addiction was very far from their imagination."