Accessibility links
In Damascus, The Bars Are Packed And The Wine Is Flowing: Life In Syria Goes On As War Rages : Parallels Revelers drink, dance and listen to music in the Syrian capital's Old City bars. "No one talks about the war anymore," a bartender says. "We got used to it."

In Damascus, The Bars Are Packed And The Wine Is Flowing

In Damascus, The Bars Are Packed And The Wine Is Flowing 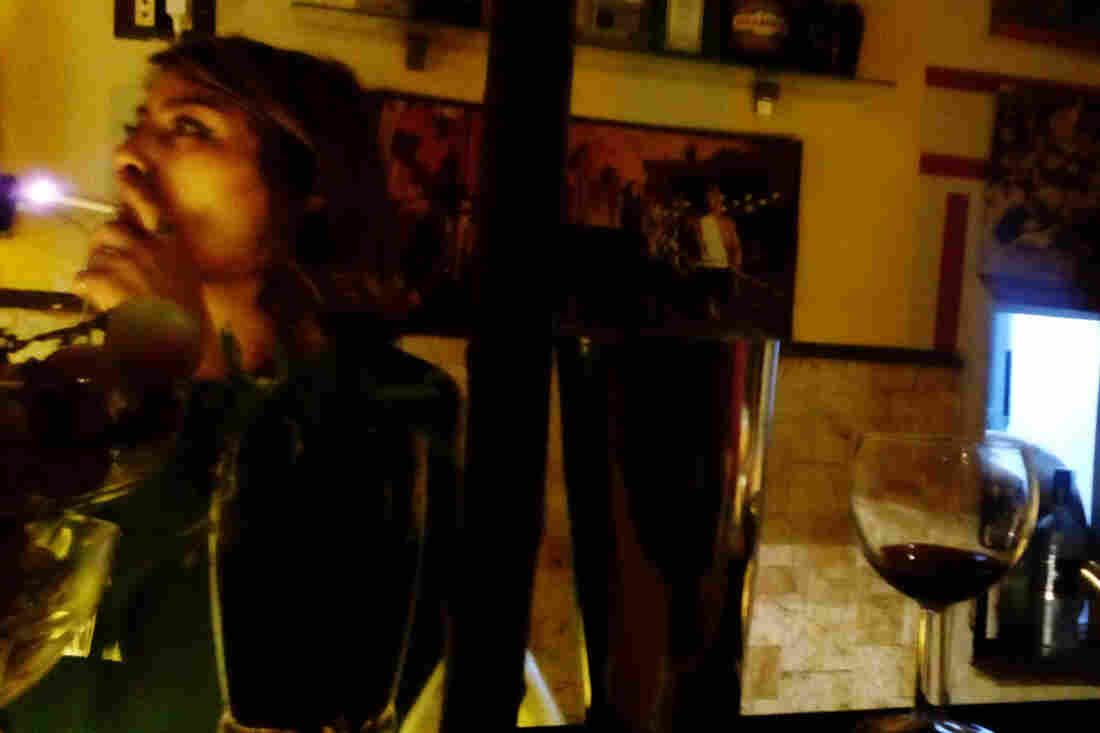 Bars are thriving in the Old City of Damascus. In recent years, the neighborhood withstood attacks from rebel-held suburbs. Alison Meuse/NPR hide caption 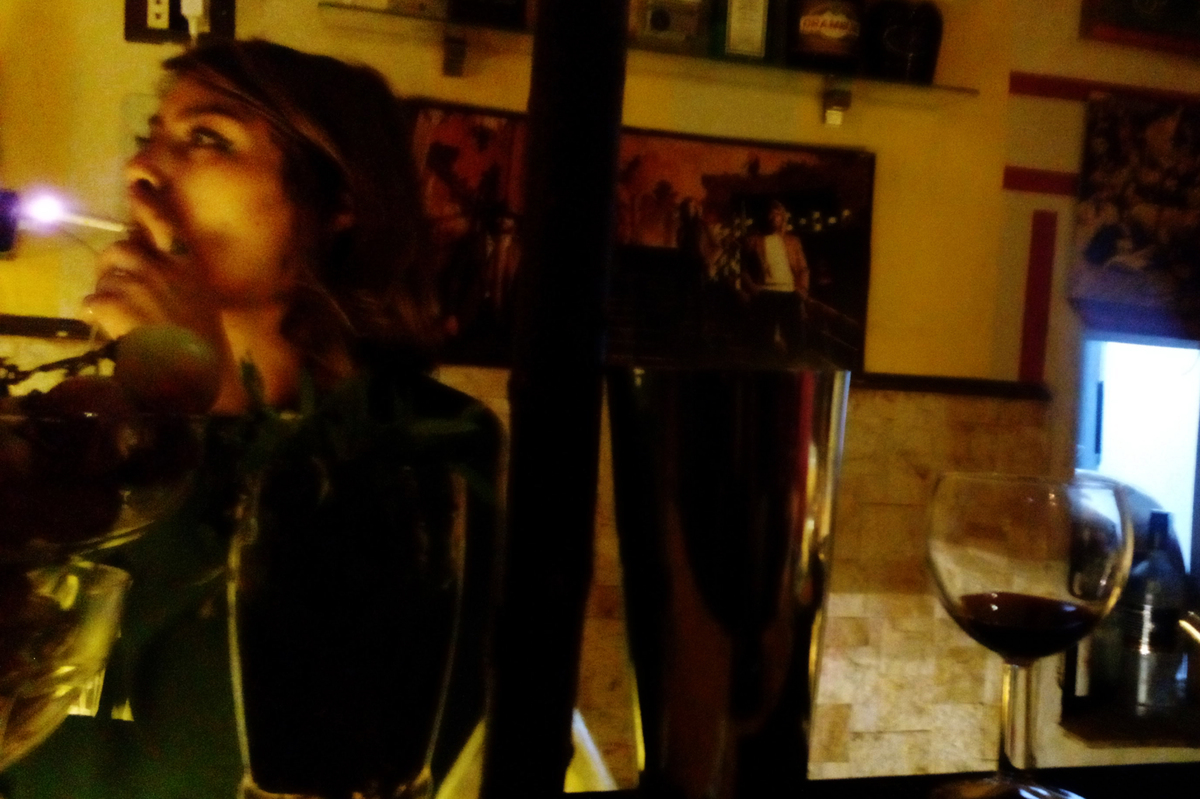 Bars are thriving in the Old City of Damascus. In recent years, the neighborhood withstood attacks from rebel-held suburbs.

The story has been done before: A Western journalist visits the Old City, checks in at a swinging bar and churns out a dispatch about Syrians partying as the war rages on. At this moment, the world's attention is on the showdown in Aleppo. But after a string of sleepless nights preparing for a trip this week to Syria that appeared out of thin air, I was ready for a glass myself.

My colleague and I entered the Syrian capital's Old City through an enormous stone gate and a checkpoint manned by pro-government paramilitaries. Its towering walls were plastered with posters of slain soldiers and loyalist martyrs standing tall in their prime. There are also posters of school children who were killed by rebel shelling. One features a fighter posing with his weapon as the Virgin Mary watches from above. Some of the posters featured Christian crosses; others featured sites holiest to Shiite Muslims (There's a Shiite Muslim neighborhood across the way.) All displayed the flag of Syria.

We walked below their solemn eyes and entered the Christian neighborhood of Bab Touma. It is hardly the only place to find a drink in town, but its narrow, stone streets and warmly lit alleys make it a favorite destination for Syrians and the rare visitors alike. The passageways are lined with cozy pubs and a smattering of shops and a few churches that are open late.

For those unacquainted with Syria, the local drinking culture deserves an explanation. It can be traced back to ancient civilizations and continues today. Alcohol in Syria is not banned as it is in some Muslim countries. Nor is it reserved for the upper class elite or religious minorities. When Iraq's parliament suddenly voted last month to ban alcohol during the Mosul offensive, the decision caused outcry among the country's Assyrian Christians and secularists.

Syria, Lebanon and Iraq have long produced their own alcoholic beverages, from beer to wine to the anise-based arak. Syria's constitution uses Islamic jurisprudence as a primary source of law, but the Baathist regime has kept alcohol legal, available and cheap.

I had in mind to visit the legendary Abu George pub, which is something like a walk-in closet with alcohol and tables for the lucky few. But it was easy to see from outside that all the chairs were occupied as a band played an intimate concert in the corner.

A scarecrow left over from Halloween parties beckoned us to an attractive alternative, a pub called La Marionnette. It's maybe eight times the size of Abu George, and it, too, was packed at 10 p.m. on a Wednesday night. We squeezed in anyways, and waited for a table. 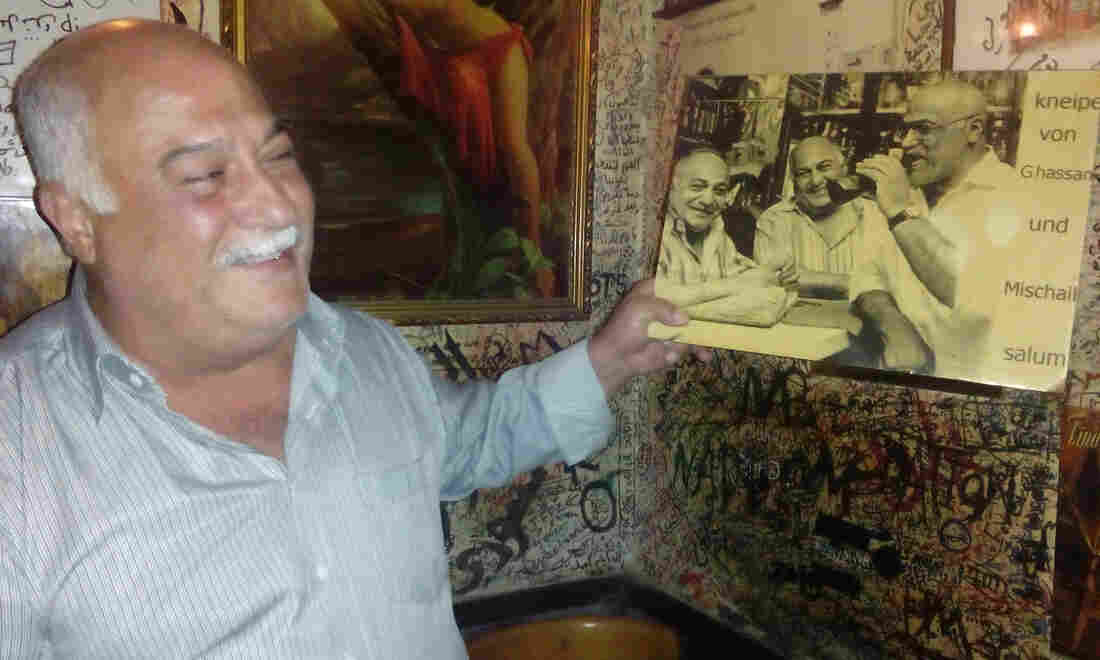 Bar owner Abu Eissam says he refused to shutter his family business for "one single day" during the past five years of civil war. Alison Meuse/NPR hide caption

The clientele of 20-something revelers sat at low tables. The bearded young men conversing in the corner casually split a large bottle of vodka, while bartenders sipped Lebanese red wine in short-stemmed glasses. The green walls were illuminated with gold and red lights glowing from handmade lamps. A photo of Abba hung on the wall next to a black-and-white classic image of Jim Morrison passed out onstage.

The bartenders also played DJ, using a laptop on a wall of shelves. "Stayin' Alive" blended into Elvis, Bill Haley, and then Chuck Berry. As the wine in our glasses gave way to bitter sediment, the music moved from the West to the Middle East.

The songs of Egypt-born musician Dalida, whose bittersweet lyrics of nostalgia and tragic tales may be as clichéd as a Damascus bar story, still give goosebumps and electrify the room. One would be hard-pressed to find anyone in this bar who didn't know someone who slipped away over the past five years of civil war — whether across the Mediterranean, to the grave or the most torturous: missing.

After waiting by the swinging door, we got the signal from a slim, brunette bartender in a gray, over-sized sweatshirt. The woman, who introduced herself to us as Dana, gave us prized seats at the wooden bar. Our glasses were refilled without a word and my colleague tried to find the link between the English literature excerpts painted on the wall.

Before us, the bartenders—men and women—danced while they served up drinks. They made the work seem like a casual family affair. Dana left the bar to DJ from YouTube, while her male colleague in a knitted wool sweater seemed unfazed by the full house, watching two couples twirling each other amid clusters of tables.

"Stayin' Alive" still rang in my ears later, as Dana agreed to an interview down the road at Abu George's pub, now with a sole table up for grabs. And so began a sober conversation over more red wine.

Dana told us how grim and deadly this neighborhood was just a year ago. Fridays were the worst.

"You wouldn't dare to come here," she said. "Fridays always have the biggest fires, mortars. They timed it with Friday prayer. After Friday prayer, there was definitely a bomb, so no one came out of their houses after 12 o'clock. Nobody. Fridays were when everybody shut their doors and their windows and just sit. For like two years. Fridays. We would get scared of Fridays."

Mortars lobbed from the besieged, rebel-held suburbs used to thud nearby and few souls dared to frequent the bars. Abu George's burly co-owner, Abu Eissam, visits our table and swears he never closed the 80-year-old establishment a single day.

Dana says the pub where she works, La Marionnette, was the first to open since the rebel shelling subsided, though it wasn't the last. Others have opened since.

"The Syrians, they don't talk about the war anymore," she said. "They are too over it."

Dana, who is her family's sole breadwinner, jokes with Abu Eissam like a daughter about taking over his tavern someday. He tells us about the "old days," when a woman would have never been seen tending bar, let alone sitting in one with men.

"Shame," he says. "It would have been shameful."

The idea of this wartime generation breaking outdated norms in Damascus is tough to square with the thought of other Syrians being governed by hardline Islamist groups — or going thirsty amid siege.

And yet that is the state of Syria today.