Accessibility links
How Foreign Journalists Here Try To Explain The U.S. Election Back Home : Parallels Reporters from Europe, Turkey and Lebanon share their experiences covering the 2016 U.S. election — everything from translation challenges to close encounters with a pregnant Ivanka Trump.

How Foreign Journalists Here Try To Explain The U.S. Election Back Home

How Foreign Journalists Here Try To Explain The U.S. Election Back Home 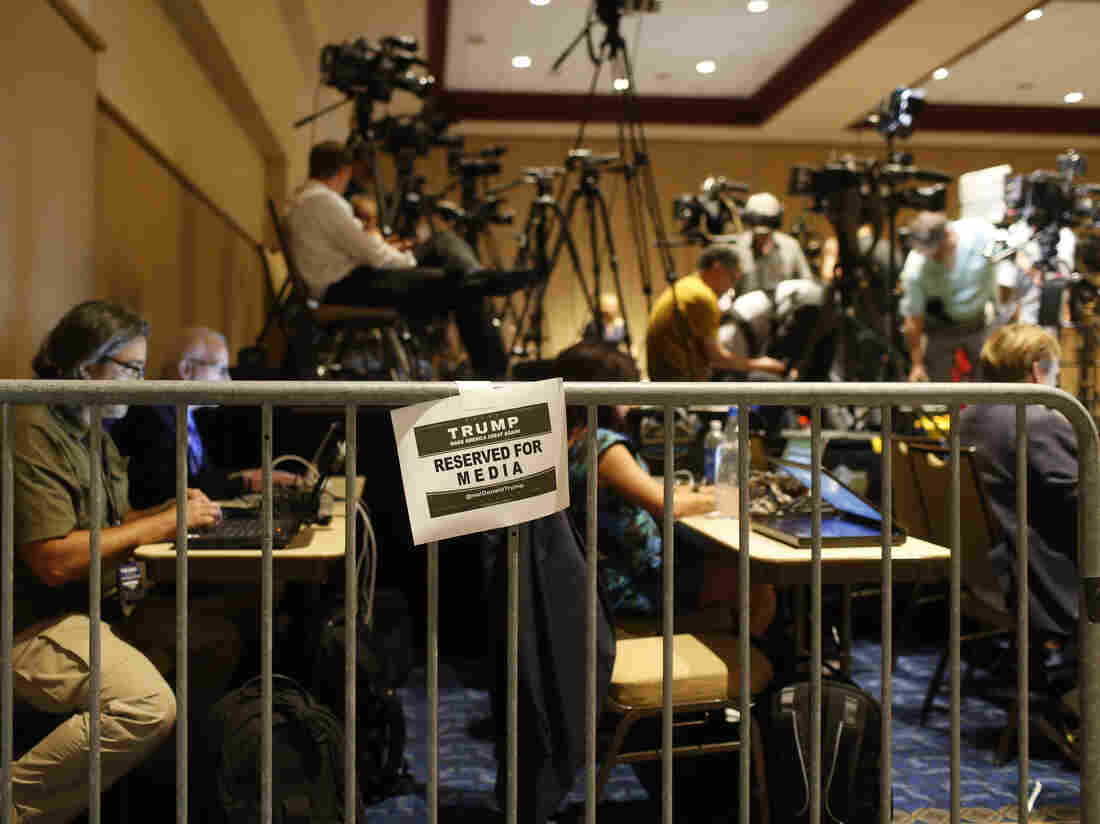 Journalists work in the Trump campaign's designated media pen as they wait for the candidate to arrive at a town hall meeting on March 14 in Tampa, Fla. Foreign journalists covering the campaign say gaining official access to Trump events has been more challenging than to Hillary Clinton's. Brian Blanco/Getty Images hide caption 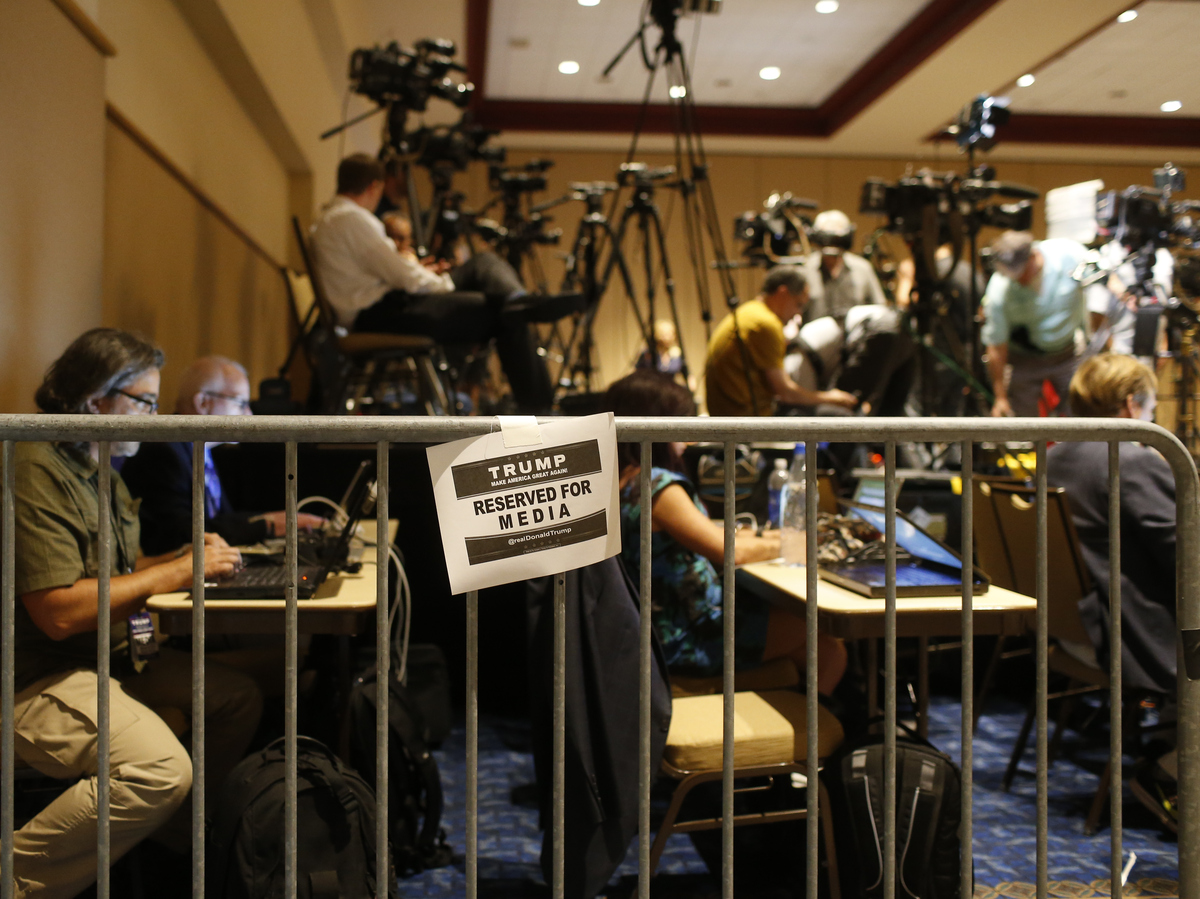 Journalists work in the Trump campaign's designated media pen as they wait for the candidate to arrive at a town hall meeting on March 14 in Tampa, Fla. Foreign journalists covering the campaign say gaining official access to Trump events has been more challenging than to Hillary Clinton's.

It hasn't been easy for journalists covering the 2016 presidential race. While doing their jobs, they've had to confront unprecedented threats, abuse, bans and accusations of conspiracy and bias.

Journalists from other countries who are covering the election have confronted their own set of challenges. The foreign press corps is low on the food chain during any U.S. presidential race, and perhaps never more so than this one. Since foreign journalists' audiences rarely include U.S. voters, campaigns don't consider them a priority. Access, particularly to Donald Trump's campaign, has been a challenge and a source of frustration. Some journalists have redirected their focus to U.S. voters themselves.

"Americans are not aware of how closely we follow what you guys are doing," says Matthias Kolb, a reporter with the German daily Süddeutsche Zeitung. "We are so obsessed with America, it's like the North Star, sort of. There is so much connection and attachment."

He and journalists from Italy, Lebanon and Turkey share some of their experiences below. Interviews have been edited and condensed. Readers may find some language objectionable.

Flores, a longtime correspondent and former foreign editor of the Rome-based daily, started covering U.S. presidential races in 1992. He now writes for both the paper and its Espresso magazine.

It's a totally different election from others for me. It comes with many, many stories and many ghosts.

For Italy, the election is a real big story. They want to know what's happening and it's been a front-page story two or three times a week.

I've been to five or six Trump rallies, I went to some as a journalist and some as a "fan." I stood between Republican militants. They asked me about food and sports. In Texas, I met some soccer fans. They were friendly, actually. These were rallies; they were not riots.

The Republican convention this year was different [than in the past]. The atmosphere in the convention center was more tense, there was more arrabiata, a sense of hate against the enemy. People tried to convince me that Donald Trump is the best candidate. Of course they did not convince me.

For an Italian audience, it's a great story. The best story was Trump himself — he is a totally different guy from any other. It was not easy to explain Donald Trump, because to have access to his campaign and staff was quite difficult. I tried for the New York state primary and they said, "We do not accept foreign reporters." It seems to me very strange. "We prefer the Americans." Well, of course, you prefer the Americans. But maybe you can find room for others!

So it's not easy. It's not easy to understand the guy — for Italians. We had [Prime Minister] Silvio Berlusconi for many years and maybe there are some similarities. But the situation, I think, is totally different, and much, much, much more dangerous for the world than Signor Berlusconi.

Karam, from Lebanon, began her job in Washington for the London-based, pan-Arab daily in 2004.

It's my fourth campaign but it feels like it's my 500th, given how much you age. It's the most frustrating, reckless campaign I've covered so far.

I've been having even vocabulary problems, even to translate words like "groping" — we don't know what to put in the headline. So even on a linguistic level, it's a challenge explaining this to an Arab audience.

We avoided direct quotes from the Billy Bush video and the two women's videos. We did not translate "p****" literally. We just said explicit words were used. We didn't know what to use with "groping" and "vagina." Arab culture is a different culture; it's more conservative.

People were shocked that this much has happened and the polls are still very close.

Then waking up every day with a new bombshell — explaining the private server, hacking, it's been increasingly negative. The John Kerry swift boat accusations — now, you laugh hilariously that that was a major story then. Now we're seeing this on multiple levels.

At the RNC, we were seated, three Arab journalists — it was pretty awkward, because we were seated among the supporters, not with the journalists. You felt you had to start clapping. Someone asked me if I was Indian and I actually said yes. I didn't want to get into an argument or hear someone say, "Go back to the Middle East."

It was a heavy environment to cover. It was different from past conventions. Even walking on the street, you saw people with their guns. Coming from Lebanon, even post-civil war Lebanon, there was nothing that visible. It was intense. I was in a Chipotle having a burrito bowl and there were guys with guns in front of me.

The rise of Trump in itself has been shocking to the Middle East. Many people thought this can't be true or it's an actual conspiracy. For people who had negative thoughts all along, this confirms their worst suspicions that the U.S. wants to take the oil and carpet-bomb the Middle East, and Donald Trump just expresses this publicly.

Kolb, a reporter for the Munich-based daily, also covered the 2012 U.S. election.

2012 seems very modest, pale and grown-up compared to 2016. In 2012, Germans were cheering for Obama, but no one really felt afraid of Mitt Romney. We see something strikingly different now. There's really a kind of fear or uncertainty if [Trump] is the president, that he could affect us in a very strong way. It resonates on a very different level. His unpredictability, the way he talks about the opposition, like, really, is that happening?

It's seen as very rude and disgusting, the remarks about building a wall, the Muslim ban.

There's an urgency and a need for context that feels much, much stronger than in 2012. To see Donald Trump lie again and again and again — we were early in calling him a liar. There were no repercussions for us. We are more opinionated [than U.S. journalists]. In March, I wrote my first story about it, that Donald Trump keeps telling lies while the Republicans are silent about it.

I felt lucky I could travel to a lot of primary states and meet Trump supporters. In Europe, he's seen as a clown, a buffoon, a racist who only white trash would support. I always try to go to some of the meetings and talk to people, try to bring back to my readers to understand — it might sound weird, but you can actually be a good person and vote for Donald Trump because you want change.

Another challenge is to explain how different politics are and how unpopular Hillary Clinton is, why she is so despised, the "lock her up" chants. Germans associate her with Bill Clinton, who was a popular president. She was secretary of state and did an OK job. It's tricky to make readers understand. There's a lot of digging into history.

The level of polarization here is beyond belief for Germans.

There have been some times it's been really tough to get into Trump events. So my time is better spent outside Washington talking with voters.

Americans are not aware of how closely we follow what you guys are doing. We are so obsessed with America, it's like the North Star, sort of. There is so much connection and attachment.

Tanis has been based in the U.S. for his Istanbul-based daily since 2008. This is the third U.S. election he has covered.

Access is a little bit challenging for foreign correspondents. What [the campaigns] care about is the U.S. press. They don't care about the foreign media.

[At Trump events] once I'm in, we are all media — and they're not friendly with the media. But I've had no problem with campaign staffers.

I once found family members of Trump in a small cafe in South Carolina having lunch. I tried to ask Ivanka a few questions. She was pregnant. She said, "No, I'm having lunch now." And a bodyguard came. But she was nice.

Turks are very familiar with this kind of campaign. Before it was very different, [American] candidates tried to be nice to each other. I thought, I wish we had the same attitude in Turkey. Our politicians are sometimes cursing, they don't care about being respectful to each other.

This [campaign] was completely shocking to a lot of Americans. But it's similar to Turkey. So, welcome to our world.