Accessibility links
5 Big Foreign Policy Challenges For President-Elect Trump : Parallels NPR journalists around the world weigh in on some of the most pressing international issues facing President-elect Donald Trump — from trade with China, relations with Russia and fighting ISIS. 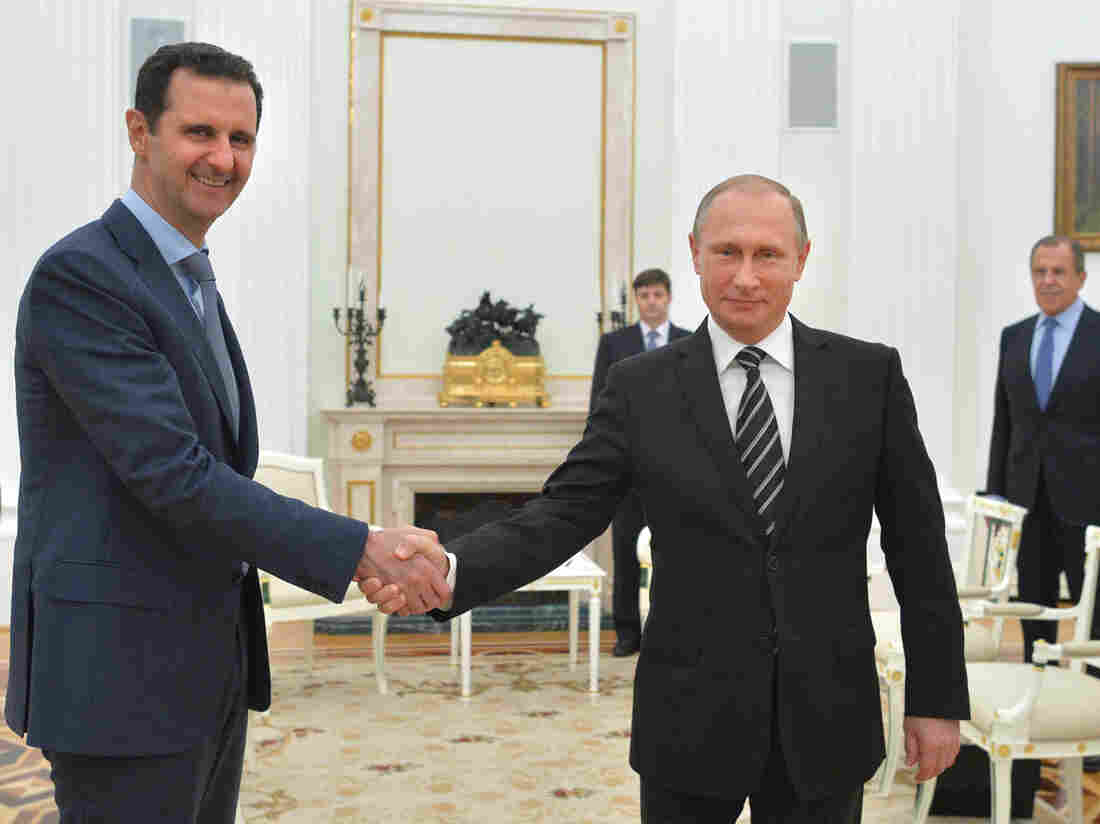 Syrian President Bashar Assad (left) and Russian President Vladimir Putin shake hands at the Kremlin in October 2015. U.S. President-elect Donald Trump faces many foreign policy challenges, which will include dealing with the war in Syria and friction with Russia. Alexei Druzhinin/AP hide caption 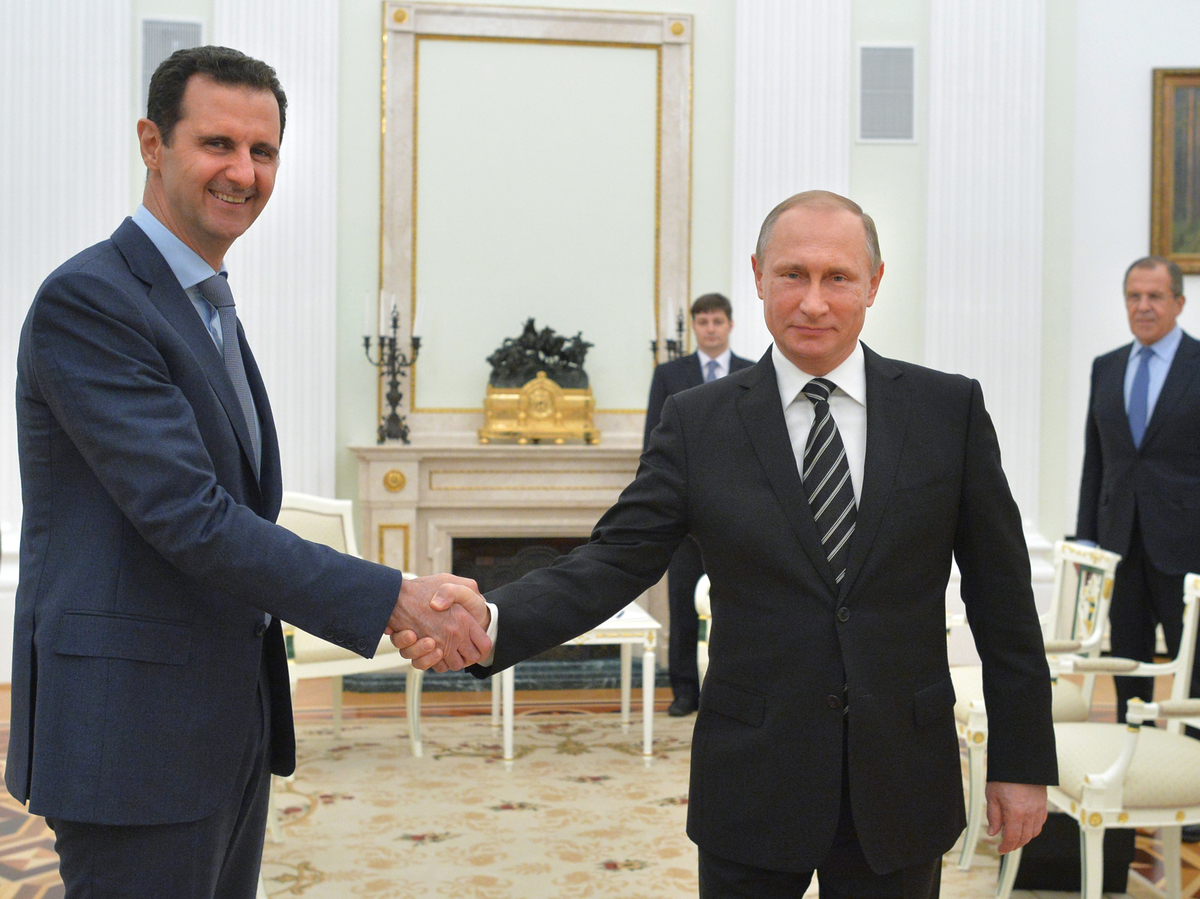 Syrian President Bashar Assad (left) and Russian President Vladimir Putin shake hands at the Kremlin in October 2015. U.S. President-elect Donald Trump faces many foreign policy challenges, which will include dealing with the war in Syria and friction with Russia.

Donald Trump, a neophyte in foreign policy and national security issues, will take office in January facing a world of challenges. The president-elect's campaign trail pronouncements on international affairs were sometimes contradictory, often vague and seldom substantive, leaving many in the U.S. and abroad to speculate about what exactly his foreign and defense policies might look like.

NPR journalists in Washington and around the world weigh in on some of the thorniest and most pressing international issues a Trump administration will confront.

One of President-elect Trump's biggest challenges will be managing what has become an increasingly contentious relationship between the United States and China.

From an economic perspective, the U.S. relationship with China has never been closer. The two countries traded more than $650 billion worth of goods in 2015, making China the U.S.'s second-largest trading partner. Politically, however, the relationship has chilled amidst U.S. accusations of Chinese hacking and Chinese complaints that the United States is trying to contain China's growing influence in Asia.

While the Chinese might welcome Trump's deal-making style, his campaign rhetoric about China has rarely veered from the vitriolic. "We can't allow China to rape our country," Trump told supporters in May when complaining about China's tough trade tactics. Trump has promised to label China a "currency manipulator" on his first day of office, and he has pledged to impose tariffs of up to 45 percent on Chinese imports to help resuscitate America's manufacturing sector.

Such a move may instead lead to more imports from other developing countries, but if implemented, it would certainly damage China's economy. The country is undergoing an historic economic transition, its growth has slowed and it still relies heavily on exports, so a trade spat with one of its most important trading partners could have widespread consequences.

On the geopolitical front, Trump has hinted he would reevaluate U.S. military alliances with Japan and South Korea, which could lead to a military power vacuum in the Asia-Pacific region. This comes at a time when China's leaders are spending more than ever on military capabilities and are eager to test their military might.

But a closer look at writings by Trump's advisors tells a different story. They assert that as president, Trump will rebuild the U.S. Navy, adding more than 70 ships to its current fleet, in part to protect the $5 trillion of annual trade across the South China Sea — a region China is eager to control.

Trump comes to office at a time when U.S.-Russia relations are at their lowest point since the Cold War.

The Obama administration has engaged mostly in hand-wringing over how to deal with Syria's civil war – and Putin has used the vacuum to take decisive, if brutal, action to intervene on President Bashar Assad's behalf and reestablish Russian influence in the Middle East and on the world stage.

Ukraine has become Europe's forgotten war. Putin's No. 1 priority is to get the West to accept (if not recognize) the annexation of Crimea and ease economic sanctions. Discord between the U.S. and the EU could help Putin achieve this goal.

During the election campaign, Trump suggested he might reconsider sanctions against Russia. If the United States drops sanctions, other European countries could follow, breaking the 28-member EU's tenuous consensus on sanctions.

American leadership is vital to keeping the NATO alliance together. The Obama administration has pledged $3.4 billion of military spending in Europe for 2017. Also next year, the U.S. will lead the deployment of a new NATO battalion based in Poland, as well as rotate an armored brigade through the region. Again, Putin may see opportunity arising from Trump's comments that he would pull back from NATO.

The war in Syria has dragged on for more than five years, displacing millions of people, killing hundreds of thousands. Powerful countries — Iran, Russia, Saudi Arabia as well as the U.S. — support different sides in the multi-factional conflict, but none has been willing or able to devote the political clout and firepower to ensure their faction actually wins.

Syrian rebels had hoped that would change with a Hillary Clinton presidency, with the U.S. putting more blood and treasure behind its declaration that Assad has lost legitimacy and should go. They hoped Clinton would implement a no-fly zone to end airstrikes by Assad and his Russian allies that strike civilian infrastructure. Those hopes have now been crushed with Clinton's defeat.

While Trump's policies are hard to predict, he has spoken approvingly of what he calls Assad's efforts to crush ISIS, and of the Syrian president's Russian ally, Vladimir Putin. It is possible Trump would back them, and cut off slim American lifelines to rebel forces in what could be a decisive tilt of the battlefield toward the regime in Damascus.

Trump inherits a war against the Islamic State entering its next act, with offensives underway or in the works against the terrorist strongholds of Mosul, in Iraq, and Raqqa, in Syria. U.S. commanders and Iraqi leaders hope the battle in Mosul might be finished or nearly over by the time Trump is inaugurated, but the Raqqa offensive may still be in full swing by the time he takes office — if it has even begun.

President Obama's ISIS strategy has been to help local fighters, including Iraq's military and, in the case of Syria, indigenous Kurds, Arabs and others. American forces are mostly in "supporting" roles, training combatants and providing combat power from the air. Trump's views about how he'd prosecute the wars are unclear.

He said during the campaign that he had a secret plan to defeat ISIS. Then he said he'd ask the Pentagon for a new plan. Whichever top national security advisers he brings in to run his Defense Department and intelligence community may have an outsize influence in the counter-ISIS policy.

One challenge for both the outgoing Obama and incoming Trump administrations is the danger that, as allied forces in Syria and Iraq squeeze ISIS, this will yield more terrorist attacks in the West – possibly even the United States. Obama and his top leaders have acknowledged that the terror danger might not go away even after a battlefield defeat of the ISIS "caliphate," given the number of potential attackers who could be hiding in the West or who might be inspired to lash out.

And no one expects ISIS to be defeated for good, even if Mosul and Raqqa fall. It has spread to Afghanistan, Libya and elsewhere, and may continue to exist as an insurgency in western Iraq and parts of northern Syria.

Donald Trump's victory could have a profound effect both on U.S. and global trade, which is already slowing. Trump says he plans to make good on campaign promises to rip up or renegotiate free trade deals within his first 100 days in office.

That includes NAFTA, the 23-year-old free trade deal between the U.S., Canada and Mexico, which Trump has called the worst trade deal the U.S. has ever signed. Analysts say ripping up the pact could hugely disrupt and hurt companies, including American manufacturers.

Trump will find it difficult to roll back a trade agreement that has been in place so long and includes protections against unilateral withdrawal, but could slowly kill the deal by repudiating elements of it and enforcing trade restrictions.

Other pending international trade agreements are also in jeopardy, including the Transatlantic Trade and Investment Partnership (TTIP) between the U.S. and the European Union, and the Trans-Pacific Partnership (TPP) which would bring together the U.S. and 11 Pacific Rim nations. The TPP is a key element to the Obama administration's "pivot" to Asia, a strategy to build up economic and security relations with Asian nations as a hedge to China's increasing clout in the region.

Trump promises to slap to big tariffs on Chinese imports, which would raise the cost of consumer goods coming in to the U.S. China could respond by shutting off market access and raising tariffs on imports from the U.S., which could hurt American manufacturing, financial services and even agricultural sectors. The concern is this could spark a trade war between the world's two largest economies. Analyst warn that Trump needs to go slow on his trade agenda, otherwise he risks retaliation from some of the world's most important trade partners.