Accessibility links
For Refugees And Advocates, Donald Trump's Stances Provoke Anxious Wait : Parallels As a candidate, Donald Trump said he'd limit the number of refugees the United States takes in, perhaps end resettlement from Syria and even expel some current refugees. How will he proceed? 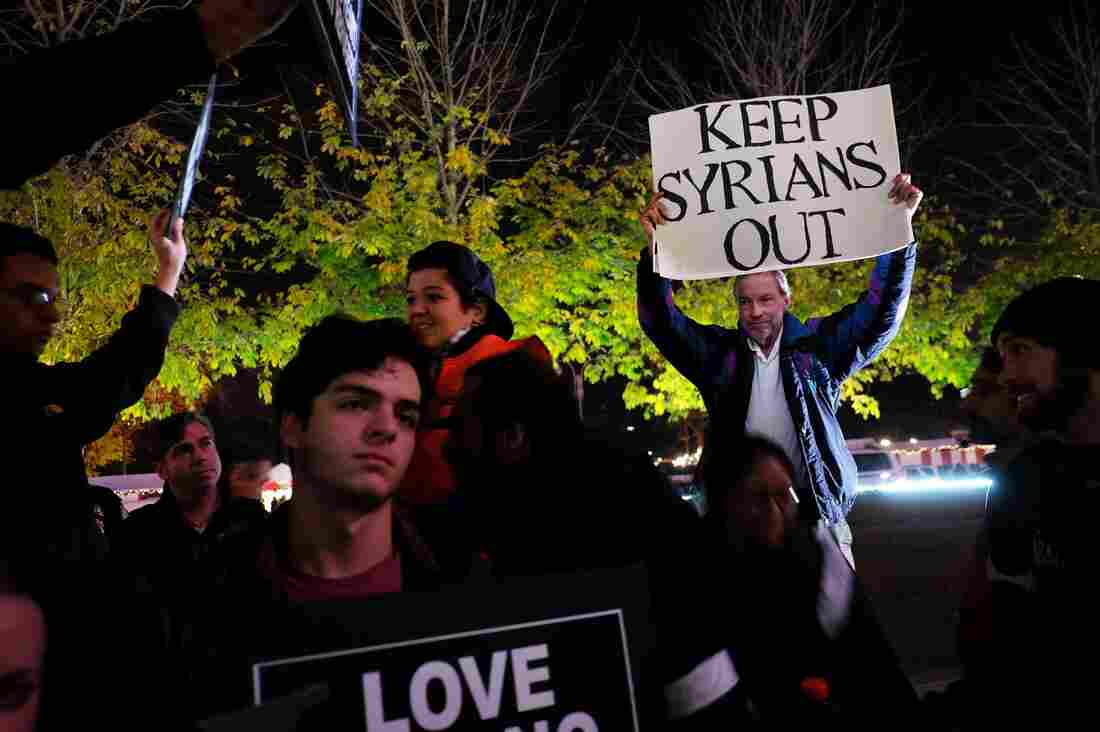 A counterdemonstrator holds a sign during a gathering in New York City to show solidarity with Syrian and Iraqi refugees last year. Donald Trump's hard-line campaign rhetoric singled out Syrian refugees. "If I win," he told a New Hampshire rally, "they are going back." Jewel Samad/AFP/Getty Images hide caption 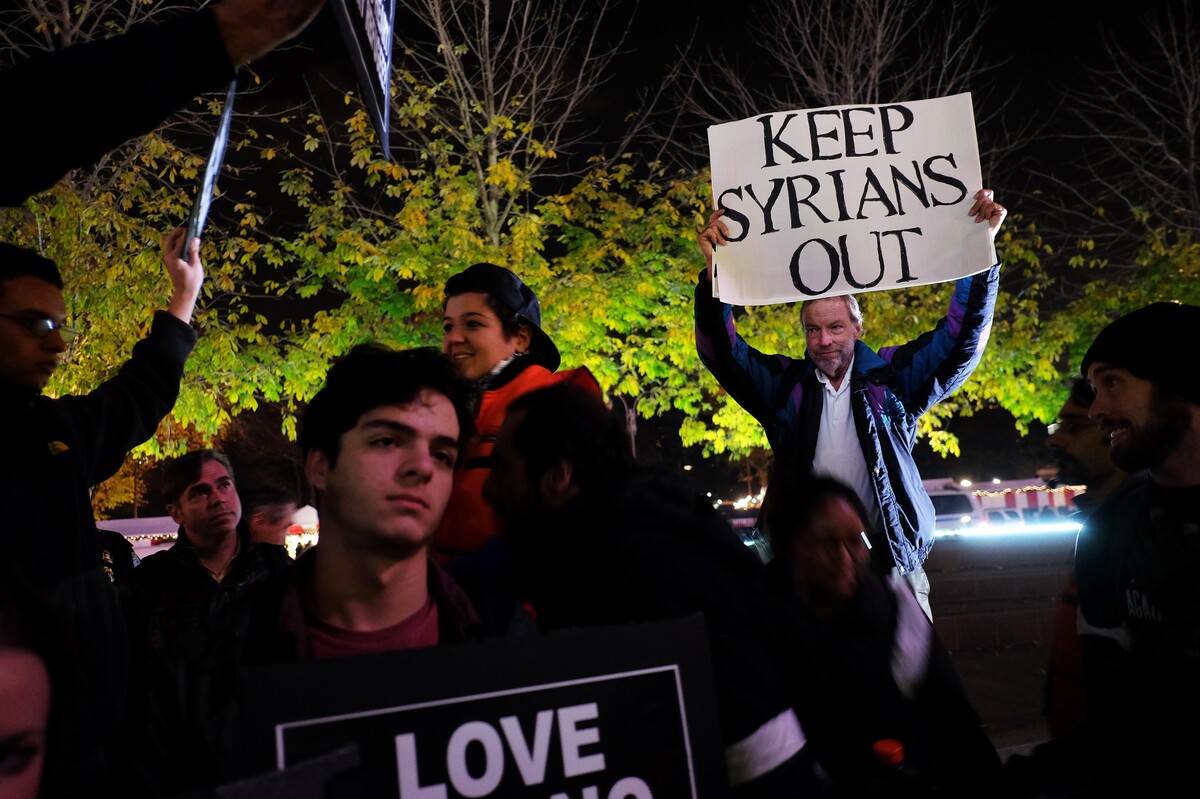 A counterdemonstrator holds a sign during a gathering in New York City to show solidarity with Syrian and Iraqi refugees last year. Donald Trump's hard-line campaign rhetoric singled out Syrian refugees. "If I win," he told a New Hampshire rally, "they are going back."

Donald Trump's election has sent tremors through America's refugee advocate community, and caused fear and uncertainty among the most recently resettled refugees, the Syrians. They listened with alarm as candidate Trump called them "terrorists" and blamed them, incorrectly, for violent attacks in America.

"That rhetoric has had an impact," says Becca Heller, director of the International Refugee Assistance Project, a legal aid program. "Trump has been successful in politicizing refugee admissions in a way that they have not been politicized before."

The United States is the world's leading resettlement country for refugees; historically, the program has had bipartisan support and has been a mainstay of U.S. foreign policy.

Syrian resettlement was extremely limited during the first years of a war that began as a peaceful protest against a repressive regime in 2011. The number of Syrians resettled in the U.S. was 105 in 2014 and rose to 1,682 in 2015.

In his last year in office, Obama has boosted that number substantially, and set a goal of admitting 10,000 Syrian refugees in fiscal year 2016. In September, his administration led a global summit to address an unprecedented migrant crisis. The president increased the U.S. resettlement target for 2017 by more than 30 percent, to 110,000 refugees from the world's most vulnerable populations.

All this could change under a Trump administration.

"When it comes to resettlement, the president has all the authority," explains Jennifer Quigley, a refugee advocate with Human Rights First. "Our big concern is that it could be none at all or it could be that there is a discrimination against Arabs or Muslims or Somalis," she says, pointing out targets in Trump's anti-refugee campaign speeches.

During the campaign, Trump said he planned to suspend the Syrian refugee program, and threatened to deport those already here. At a rally in New Hampshire last year, he told a cheering crowd, "I'm putting the people on notice that are coming here from Syria as part of a mass migration, that if I win, they are going back."

"Everyone is terrified, they are scared, they are shocked, " says a refugee named Mohammed, describing the Syrian refugee community's reaction to the U.S. election. He asked to withhold his last name because of fears for family back home. He also fears that Trump will carry out the hard line threat; rounding up Syrian refugees and kicking them out.

"You brought them here because they are refugees, they don't have homes anymore," he says. "Send them back where? To hell?"

Mohammed and his 17-year-old daughter, Lulu, are resettled in central New Jersey, in a small apartment where cable news channels are the constant background ambience. They arrived in the U.S. in 2014 and were granted asylum in 2015.

A successful Damascus businessman, Mohammed fled his homeland, fearing arrest and torture for his support of an uprising that began as a peaceful protest against an oppressive Syrian regime.

"Half of my family are back in Syria," he says. His wife and a younger daughter are still living in Damascus. "This is going to destroy my hope." 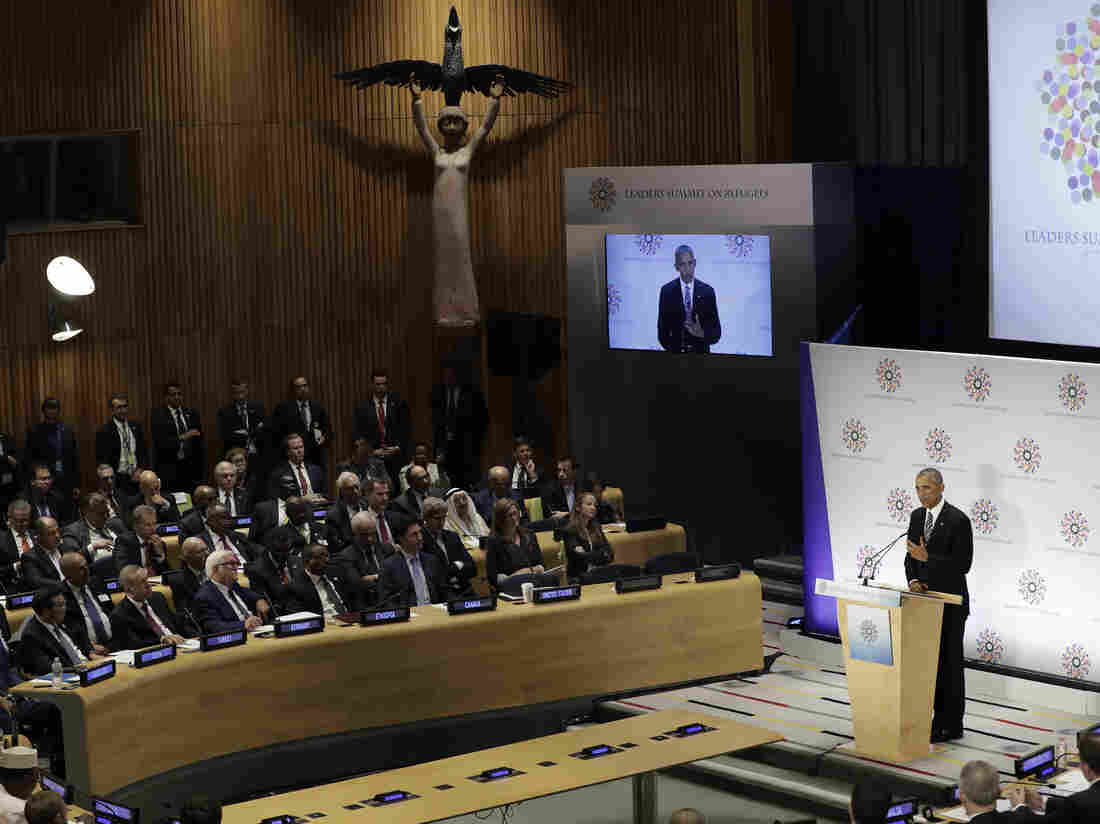 President Obama speaks during a summit on refugees at the U.N. on Sept. 20. The president has increased the target number for U.S. settlement to 110,000 refugees from the world's most vulnerable populations. Carolyn Kaster/AP hide caption 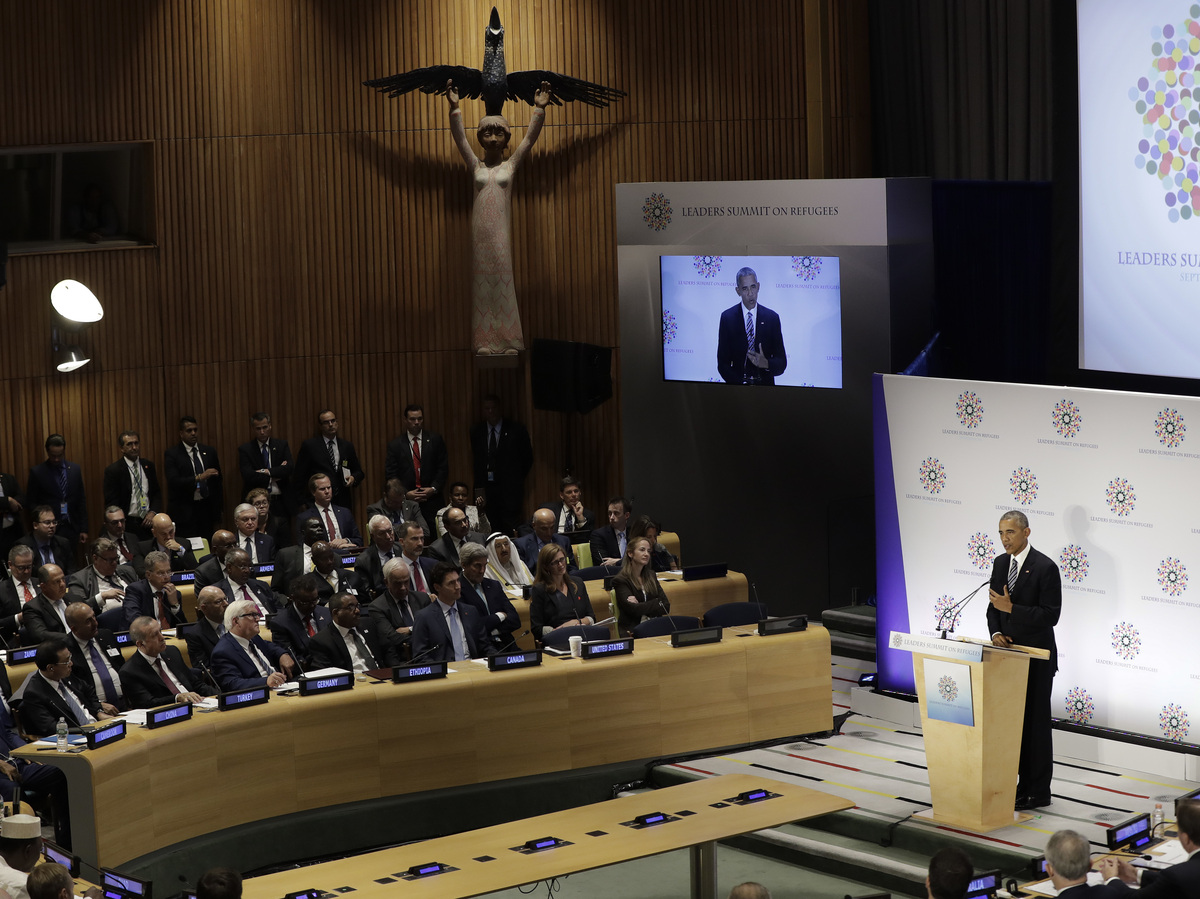 President Obama speaks during a summit on refugees at the U.N. on Sept. 20. The president has increased the target number for U.S. settlement to 110,000 refugees from the world's most vulnerable populations.

Mohammed hoped his appeal for family reunion would be granted after he obtained asylum status for himself and Lulu. Now, the election throws official approval and a family reunion in doubt.

After a campaign of furious soundbites and often contradictory policy directions, Trump has yet to fill in the details of his comprehensive refugee resettlement program.

"Admission of refuges from war-torn areas of the world has been a key component of our foreign policy for decades and decades," says IRAP's Heller. "To give that up now will seriously damage our credibility with our allies abroad."

Advocates argue that backtracking on American commitments could encourage other countries to follow the U.S. example, deepening a humanitarian crisis for allies and giving talking points to Muslim militants who claim that the West is hostile to Islam.

But bipartisan support for refugee resettlement unraveled after last November's Paris terrorist attacks, when early reporting erroneously identified one of the attackers as a Syrian refugee. Support further declined following last December's terrorist attack in San Bernardino, Calif., and a mass shooting in June at the Pulse nightclub in Orlando.

In An Ancient Damascus Bazaar, A Refuge From War

Refugees had no role in these attacks, but GOP lawmakers began to call for a pause in resettlement and so did a majority of U.S. governors. Trump's hard-line campaign rhetoric, specifically against Syrians, resonated with a fearful GOP's voting base.

Now that Republicans control both chambers of Congress and the White House, refugee advocates fear there will be severe funding cuts for their work.

The first outlines of President-elect Trump's policy have come in a document from his transition team called "The First Day Project" with a to-do list for January 2017. Refugees come near the top of the list, "a top-five priority of the transition team," says Quigley. The policy includes the intention to "suspend immigration from terror-prone regions where vetting cannot safely occur."

"Terror-prone" would certainly describe Syria, Afghanistan and Somalia, the three countries that produce half of the world's refugees.

After Trump's win, refugee communities across the country have turned to teachers, immigration lawyers and other advocates for guidance on managing deep anxieties. Many have been in the country a short time, a few months to a few years, and have never been through a U.S. election, much less one that's unparalleled even for Americans.

"President-elect Trump said in his acceptance speech that he wants to treat everyone fairly. And I hope that for the sake of everyone, he will hew to that promise — as it pertains to both U.S. citizens and to immigrants," says Stephen Yale-Loehr, an immigration law professor at Cornell University.

His advice for refugees: Don't panic. "Nothing is going to happen immediately," he says about deportation fears.

For Syrian Refugees In Connecticut, A Helping Hand From Private Volunteers

Refugees are legal residents, he explains, with constitutional rights. Even a U.S. president does not have the power and authority to "round them up and deport them," says Yale-Loehr. "If he thinks they are a terrorist threat, he would have to say a specific refugee poses a threat and have some evidence to back it up."

Yale-Loehr also scoffs at Trump's often repeated campaign charge that when refugees are admitted to the United States, "We don't know who these people are."

He says the vetting process for refugees is designed to identify security threats. There is an enhanced layer of security vetting for Syrians.

"Syrian refuges have to go through a 21-step vetting process before they are allowed to come to the U.S. It goes to three different agencies," says Yale-Loehr. "I am not sure what any president could do to make it even more stringent than it already is."

The U.S. takes in about a million immigrants each year, admitted legally to work and study. This is separate from refugee arrivals, who are fleeing war, persecution or political chaos. The annual number of refugee admissions is set by the president.

Refugee advocate Chris George says the campaign rhetoric could undermine a program that has resettled 750,00 refugees since Sept. 11, 2001 — with not one arrest for a domestic terrorism charge.

"This all goes back to a fundamental lack of information about the refugee program and lack of contact," he says.

George is the executive director of Integrated Refugee and Immigrant Services, a nonprofit agency in New Haven, Conn. His organization has resettled more than 250 refugees this year in a distinctive program that partners with private groups to place refugee families in communities, "so people can meet them and have them live down the street and walk to school with their children."

Most Americans have never met a refugee, says George, and that is part of the problem. He places some of the blame on the State Department, which encourages resettlement programs to operate at a low profile.

"If people throw up their arms, politicians included, and say, 'We don't know anything about this refugee program, we don't know who these people are, we don't know if they've been vetted,' well, the information is out there. It's out of ignorance that people say those things."