Accessibility links
Women's Rights Become A Battleground For Israel's Ultra-Orthodox Jews : Parallels Some women in Israel's ultra-Orthodox community are pressing for greater rights in confrontations playing out at places including a radio station and the most important site for Jewish prayer. 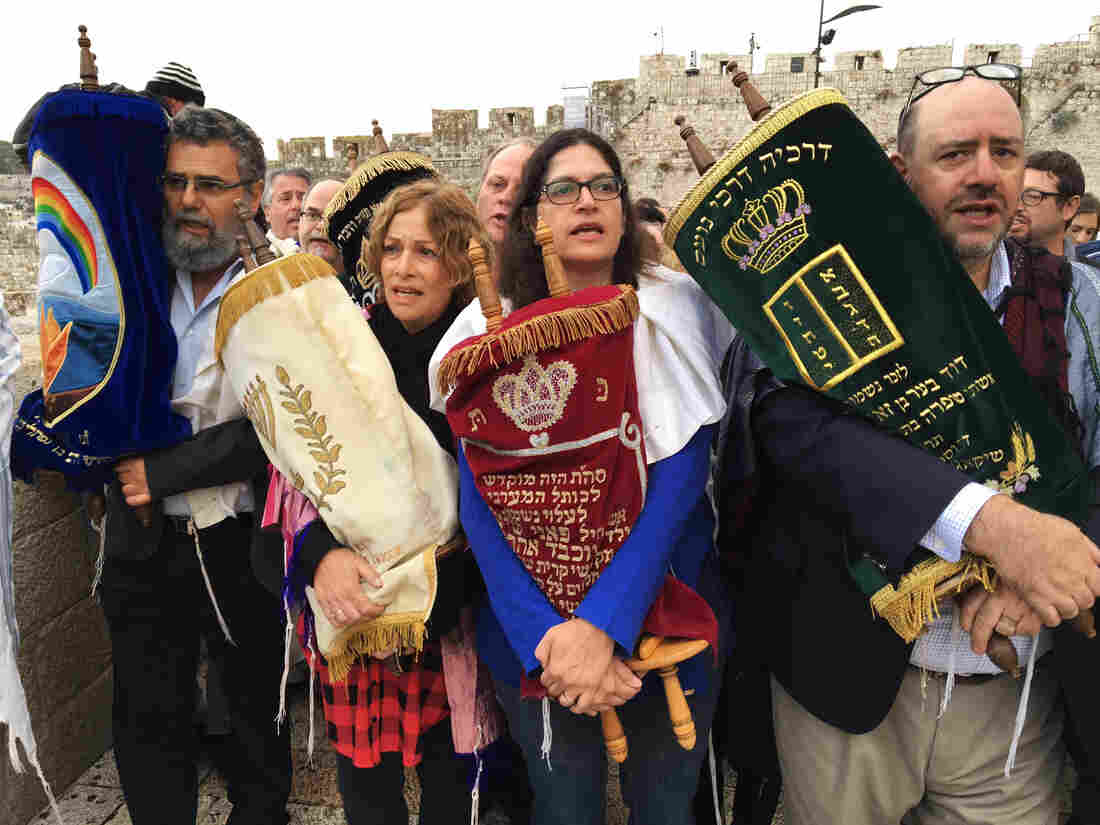 Members of Women of the Wall, which lobbies for women to be allowed to sing and pray aloud at the Western Wall, march through the Jewish quarter of Jerusalem's Old City. The group organizes monthly marches and are often heckled by ultra-Orthodox men. Lauren Frayer/NPR hide caption 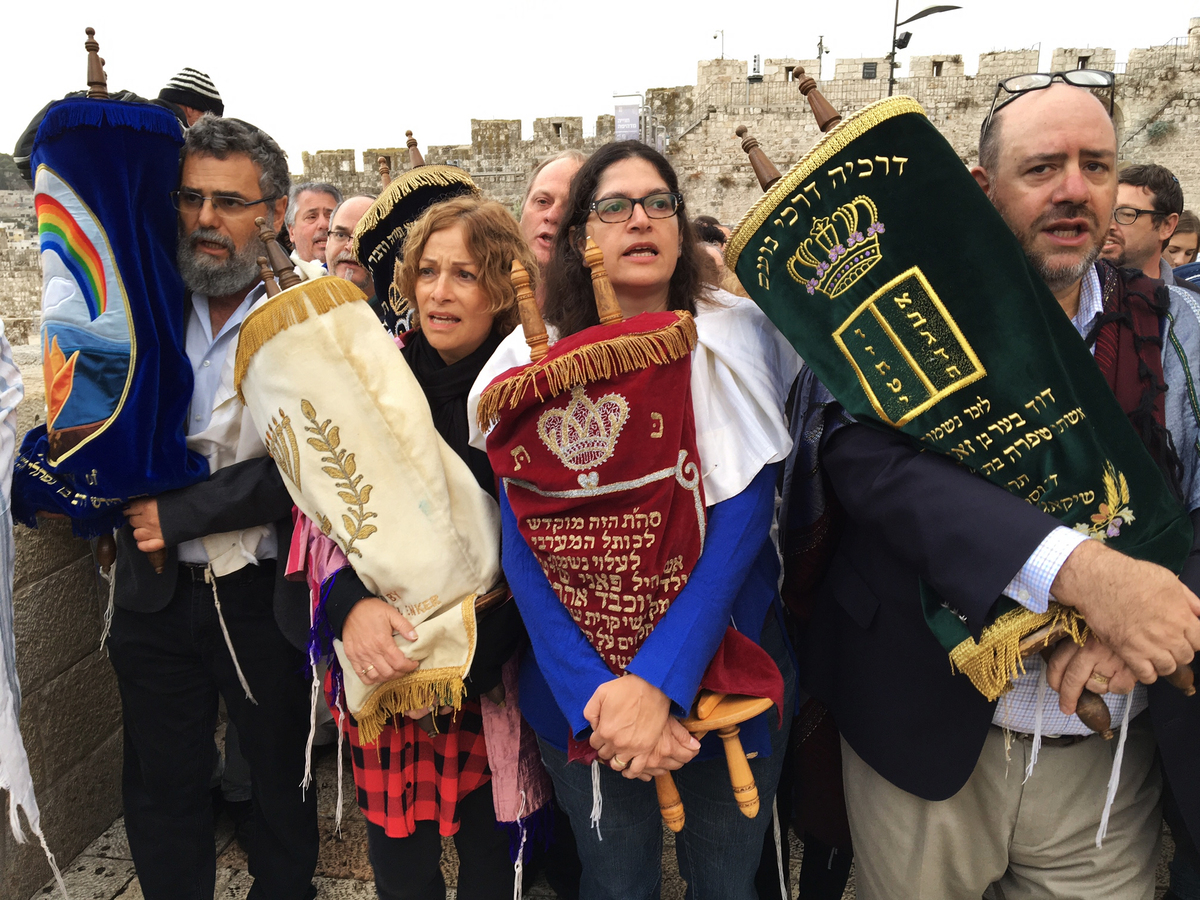 Members of Women of the Wall, which lobbies for women to be allowed to sing and pray aloud at the Western Wall, march through the Jewish quarter of Jerusalem's Old City. The group organizes monthly marches and are often heckled by ultra-Orthodox men.

Jewish women sing songs of worship as they march arm in arm with male supporters through an ultra-Orthodox area of Jerusalem's Old City.

They're from a group called Women of the Wall, which lobbies for women to be allowed to pray, sing and read the Bible aloud at the Western Wall, the most important site for Jewish prayer. They hold these marches about once a month, and they often get heckled. Today is no different.

Ultra-Orthodox men sneer and beseech the women to go silent. Young boys from a nearby Jewish seminary, or yeshiva, taunt the women and blow high-pitched whistles to try to drown out the female voices.

Some ultra-Orthodox object to women singing in public — a subject of theological debate here. In Israel, it's rare to hear a woman even speaking on ultra-Orthodox radio.

Four years ago, a lawsuit was filed by an Orthodox feminist group called Kolech, which means "Your Voice" in the Hebrew feminine. It was one of the biggest class-action lawsuits in Israeli history, and it targeted what was then an all-male, ultra-Orthodox radio station called Kol Barama, founded in 2009.

"There were no women interviewing. You wouldn't be able to hear a woman on this radio channel," says Kolech's executive director, Yael Rockman. "Not only that. This radio channel is not private. They get money from the government. "

The discrimination lawsuit went all the way to Israel's highest court, and in late 2014, the women won.

With a birth rate double that of the national average, Israel's ultra-Orthodox community is growing — and so is its political power. Feminists are girding for more legal battles over women's rights.

In recent years, Israel's ultra-Orthodox have lobbied to omit women's faces from advertisements on the side of Jerusalem buses that circulate in religious areas. During recent Jewish holidays, signs appeared in a religious neighborhood of Jerusalem, Mea Sharim, instructing women to keep off the main road and use side streets for the sake of modesty.

"Radicalization is getting worse, for sure. At the same time, the vision of equal rights, equal participation and women's power — all of that is getting stronger around the world," says gender sociologist Elana Sztokman, author of a book called The War on Women in Israel.

Despite the feminists' legal victory against Kol Barama, Sztokman believes not enough is being done to protect women. She says that because the ultra-Orthodox tend to vote as a homogeneous bloc, they have achieved disproportionate political power and the Israeli government caters to them in an unprecedented way.

Until now, "Jews have never gone to the government authority and said, 'Let's make sure that the public spaces fit the needs of our most radical views on women, because it offends our most extreme strict men,'" Sztokman says. "That has never happened until Israel [in the] 21st century."

Kol Barama declined NPR's requests for an interview. Under court order, it recently allowed women on call-in shows. They used to have to fax their questions to be read on-air by a man or child.

Now, for two hours each Friday, the husband-and-wife team of Ortal and Nir Kaptan host a program about family values called "Women of Valor." The station says the program presents the news "from the point of view of a Torah-observant couple." One recent episode included discussions about children's education, how to keep a peaceful atmosphere in the home, health, fitness and recipes.

"Kol Barama is making it a priority to give a voice to women of valor," Ariel Deri, the station's CEO, said in a written statement.

But the radio is fighting the women's demand that it pay about $26 million in damages for the years immediately after its founding when it didn't air any female voices. It's the largest claim, advocates say, ever made for women's rights in Israel.

This winter, both sides are filing affidavits in the penalty phase of the case, and a ruling is expected next summer.

Kol Barama's backers say this is a case about freedom of religion and how niche media serve their markets.

"This is the way to the haredi [ultra-Orthodox] public's hearts and ears — by having fewer women on the air," says Meni Schwartz, editor of one of the largest ultra-Orthodox news websites, B'Hadrei Haredim.

Schwartz's website doesn't publish photos of women, though it recently made an exception for Hillary Clinton. He defends what he calls Kol Barama's freedom to make its own editorial policy, including to choose the gender of the voices it broadcasts on the radio.

"If you ask the female listeners of Kol Barama, I think you would find that 90 percent of the women in the community would say there's no need to broadcast women if it goes against tradition," he says, gesturing at the ultra-Orthodox neighborhood just outside the window of his office in Bnei Brak, a religious community north of Tel Aviv.

So NPR set out to ask some women at a nearby restaurant that happened to be hosting a bris, or circumcision ceremony. Men in black hats and silk suits danced and sang, while women mingled behind a partition.

"No, the radio shouldn't air women's voices — that's forbidden," said Chana, who didn't want to give her last name because she thinks women — including herself — should not be on the radio.

A dozen women around her nodded in agreement.

Israeli courts have ruled that these women were discriminated against on the radio — even if they don't think so themselves.