Accessibility links
As Marrakech Climate Talks End, Worries Remain About U.S. Pullout : Parallels Negotiators had hoped the meeting would be the first step in implementing last year's Paris agreement to reduce greenhouse gas emissions. But the U.S. election has cast their plans into doubt. 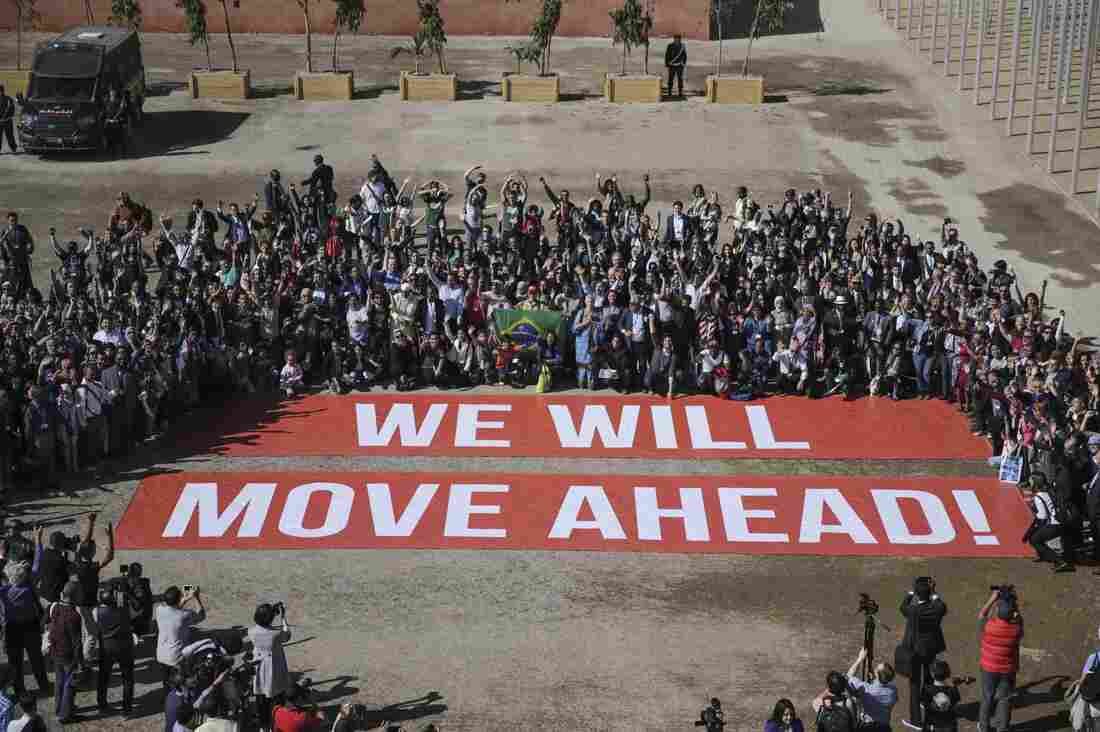 Participants at the Marrakech climate conference stage a public show of support for climate negotiations and the Paris agreement on Friday. David Keyton/AP hide caption 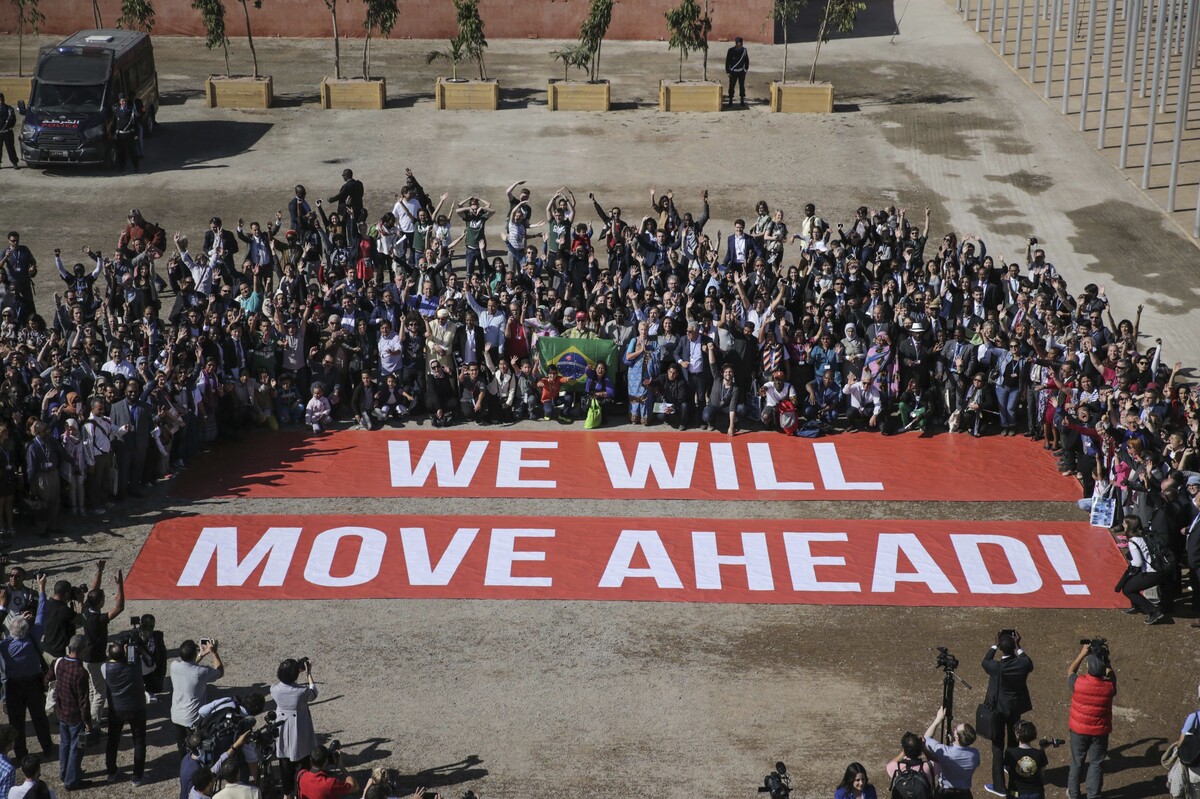 Participants at the Marrakech climate conference stage a public show of support for climate negotiations and the Paris agreement on Friday.

This month's Marrakech Climate Change Conference, the first major meeting to follow a landmark climate agreement last year in Paris, had been billed as a gathering of "action." But a day after the conference began, the surprise election of Donald Trump as U.S. president threw the action into doubt, as representatives from about 200 nations struggled to regroup and assess the future of last year's climate deal.

Trump has called climate change a "hoax" and has pledged to pull the U.S. out of the Paris agreement.

The Morocco conference started on a high note, riding a wave of climate successes over the past year beginning with the Paris accord that set emissions reductions for each country, aimed at making sure the earth does not warm more than 2 degrees Celsius from pre-industrial levels. Countries agreed to try to prevent the earth from over-heating, making glaciers melt, seas rise and causing catastrophic droughts and storms.

Diplomats and climate activists arrived in Marrakech intending to strengthen that agreement, with a goal of cutting emissions even further to keep warming below 1.5 degrees Celsius. 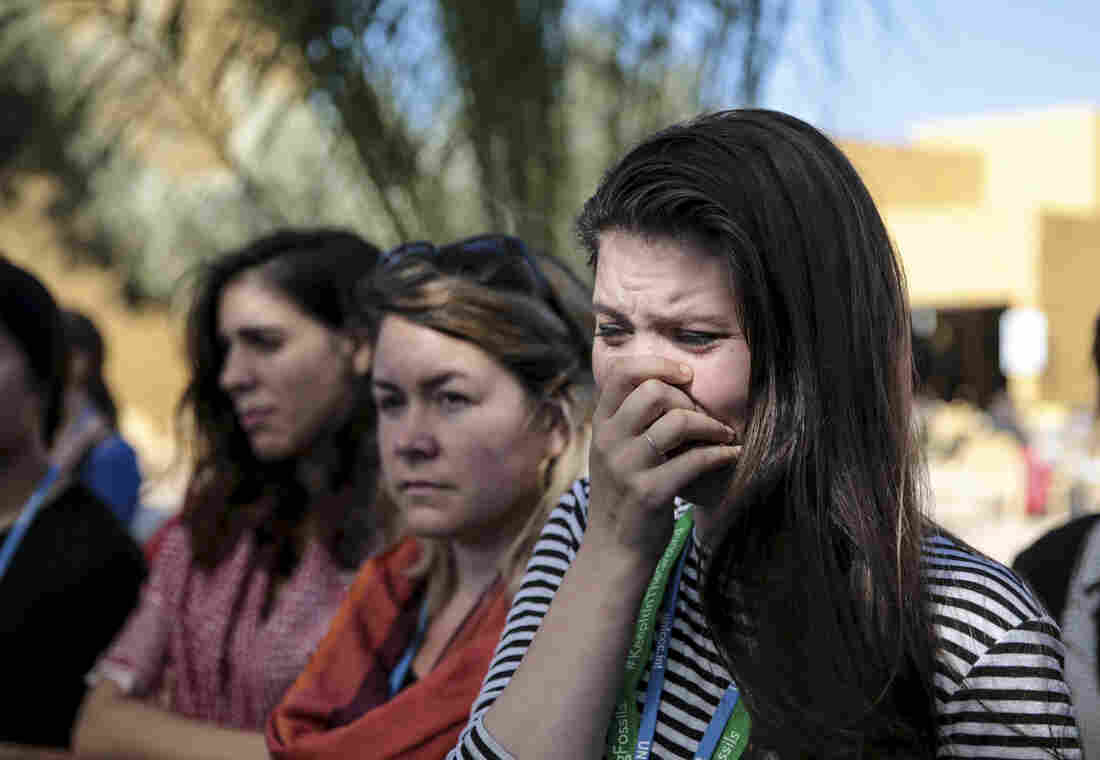 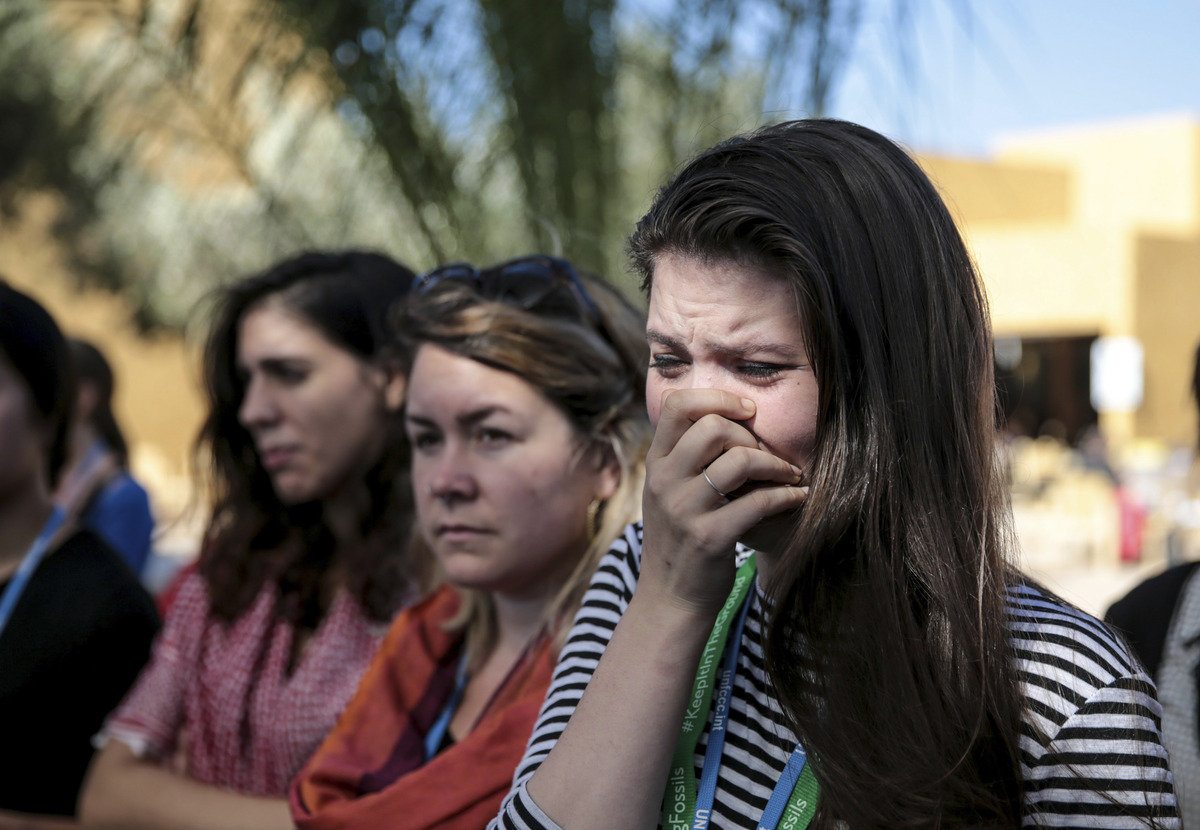 Environmental activist Bethany Hindmarsh, 26, cries during a protest against President-elect Donald Trump at the Marrakech climate conference on Nov. 9.

The morning after the U.S. election, shocked conference-goers wept and held emergency meetings. Nobody wanted to speculate publicly about what the Paris agreement might look like without U.S. involvement.

A stunned U.S. delegation — leaders at the Paris talks last year — now found themselves lame ducks. They delayed a planned roll-out of their mid-century emissions reductions goals. At a press conference Nov. 12 about oceans, reporters wanted to know just one thing: What happens now, with Trump taking charge in a couple of months?

"You know, I just can't speculate," Catherine Novelli, the Under Secretary of State for Economic Growth, Energy, and the Environment, told them. "I can only tell you what is right now." She went on to say, "That'll be for the future to answer, but there are definitely market forces and business forces strongly at work and that's something everyone supports because we support jobs for our citizens and we want our economies to be strong."

The U.S. is responsible for 20 percent of all global carbon emissions, second only to China. As one of the world's wealthiest nations, it had pledged about $3 billion to the Green Climate Fund, which would help poor nations meet their emissions goals and adapt to the worst impacts of climate change, like rising seas, droughts and devastating storms. The U.S. so far has paid $500 million of its pledged amount. 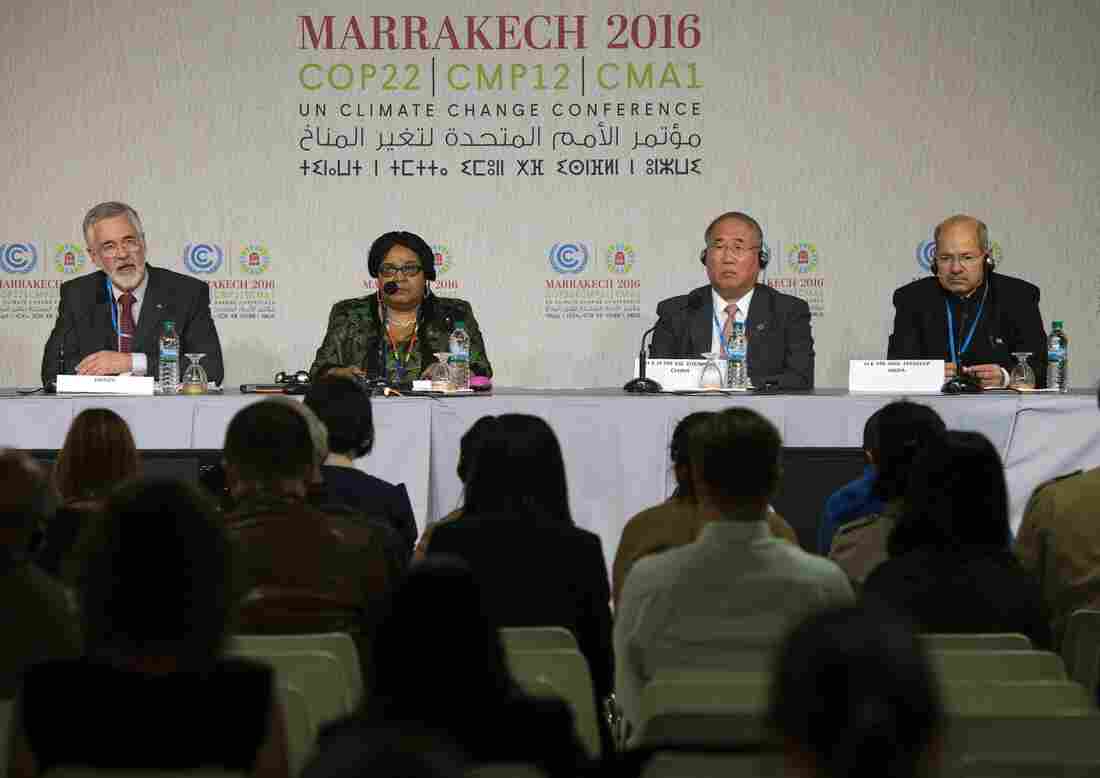 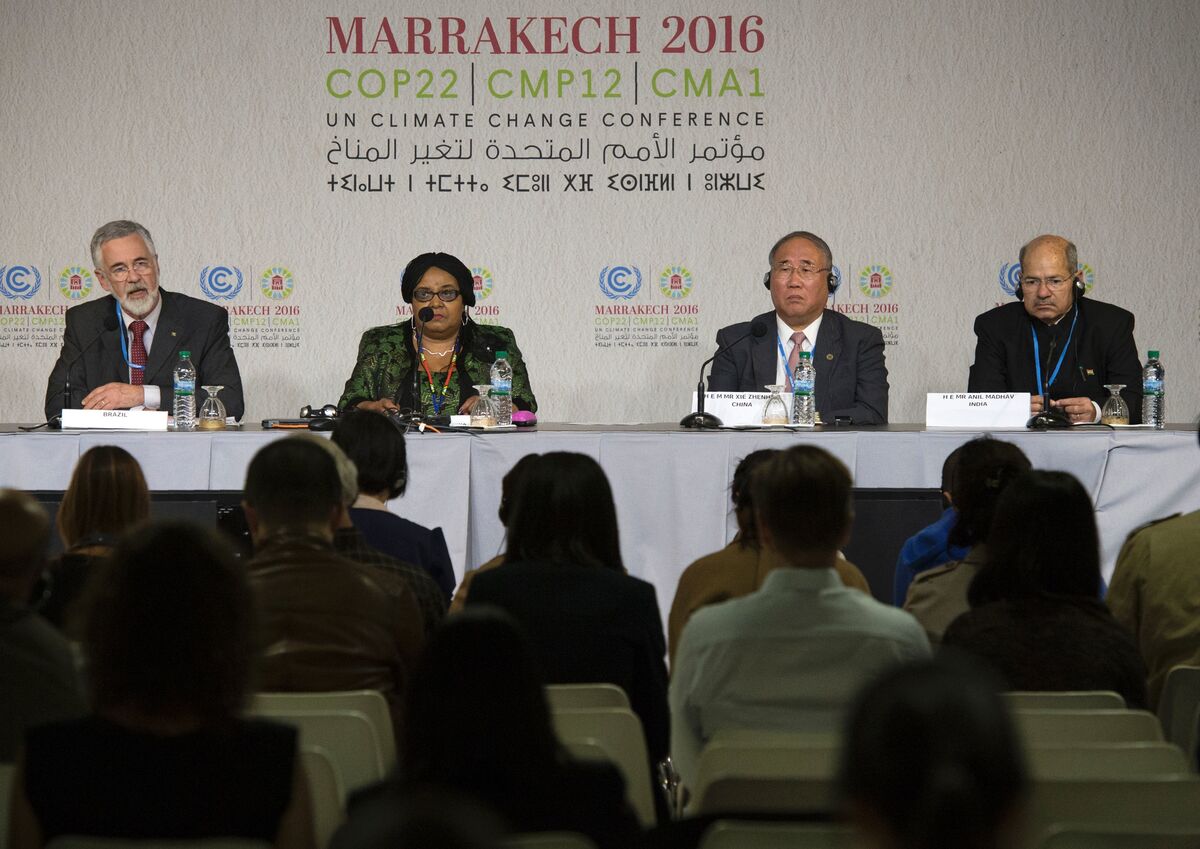 A U.S. pullout may mean that China could take greater leadership in the climate arena. Both China and India went ahead in Marrakech and pledged their commitments, with or without U.S. involvement, and China now sees an opportunity to boost its role on the world stage.

States like California that have led the U.S. in lowering emissions might also gain new status on the global stage, filling the gap by pledging cooperation with foreign countries and committing to further carbon reductions.

"California is not a country, but as a large state, California continues to be fully committed," said Ken Alex, senior policy adviser to Gov. Jerry Brown. "We will continue to work with anyone who is interested in working with California. It's good for the economy, it's good for trade, it's good for California's environment."

Amid the uncertainty, some economists and activists talked about forming "carbon clubs" as place-holders to keep momentum going toward carbon reductions.

Outgoing U.N. Secretary General Ban Ki-moon said, "I believe that [Trump] understands that there are market forces already at work on this issue. And we need to harness these forces for good of the planet and all the species in this planet."

On Wednesday, Secretary of State John Kerry delivered a 49-minute speech in which he never mentioned Trump by name, but said, "No one has a right to make decisions that affect billions of people based solely [on] ideology or without proper input." Kerry said failing to fight climate change would be a "moral failure, a betrayal of devastating consequences."

By the end of the conference today, a defiant optimism had emerged. "There is no ignoring that the election of Donald Trump sent reverberations through the negotiation halls, but delegates carried on with a strong spirit of determination," said Paula Caballero, global director of the World Resources Institute climate program. "No country stepped back from its commitment to climate action... Support for climate action remains unshakeable."

Reporting for this story was supported by the International Reporting Project.