Accessibility links
S. Korean President Named As A Criminal Suspect In Cronyism Scandal : Parallels Prosecutors in South Korea will question President Park on allegations of corruption and cronyism. The move comes in the wake of massive protests calling for the president to step down. 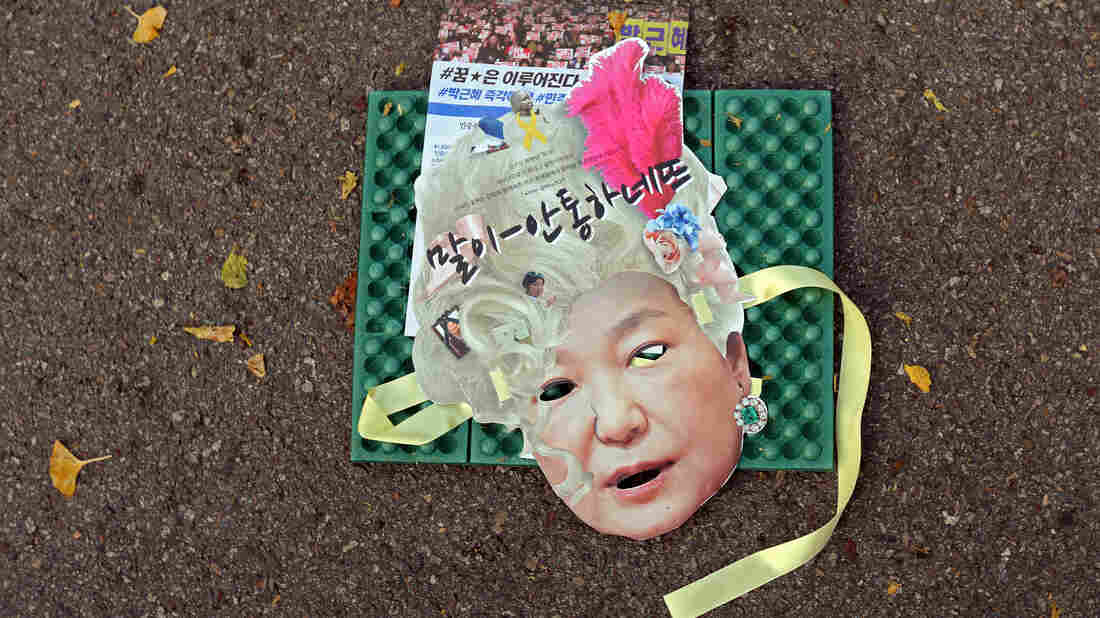 A mask of South Korean President Park Geun-hye lay in the street as thousands rallied in Seoul to demand her resignation. Michael Heiman/Getty Images hide caption 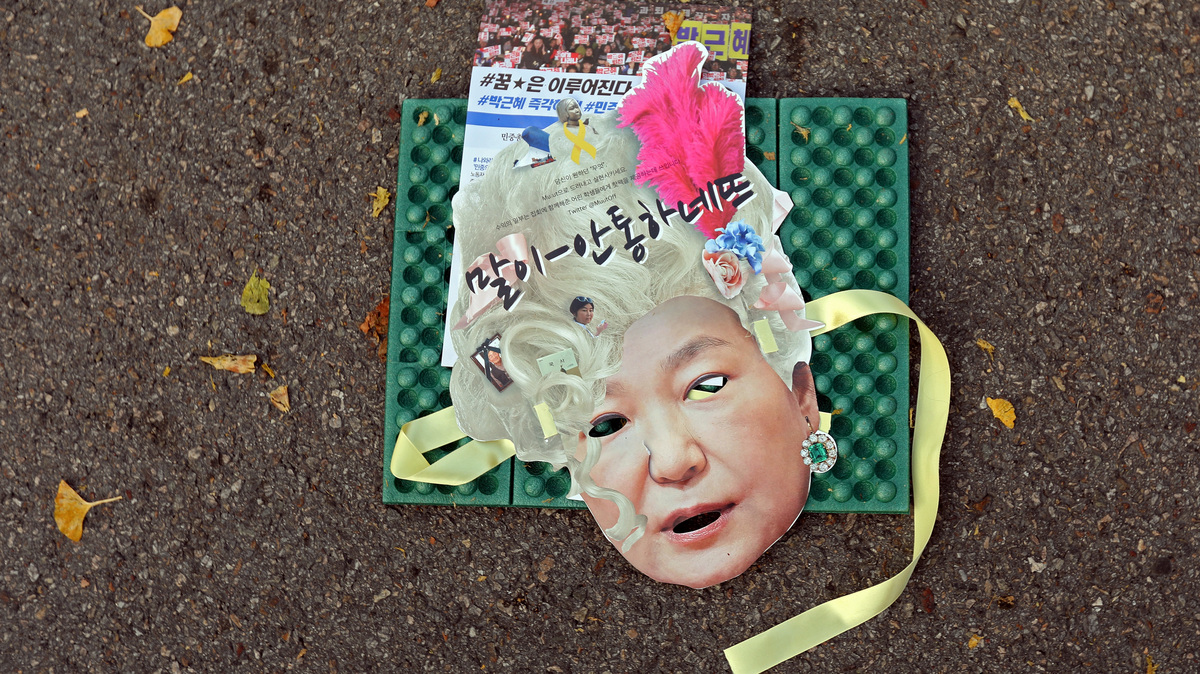 A mask of South Korean President Park Geun-hye lay in the street as thousands rallied in Seoul to demand her resignation.

A swirling cronyism scandal continues to grip South Korea, where prosecutors announced Sunday that the president is a suspect in a criminal fraud investigation that's already ensnared her close friend and senior aides. President Park Geun-hye made history, becoming the first sitting South Korean president to be a suspect in a criminal investigation.

Mass demonstrations against the president have continued across the country. For the fourth weekend in a row, hundreds of thousands of South Koreans crowded the streets of central Seoul with a simple demand: Step down. 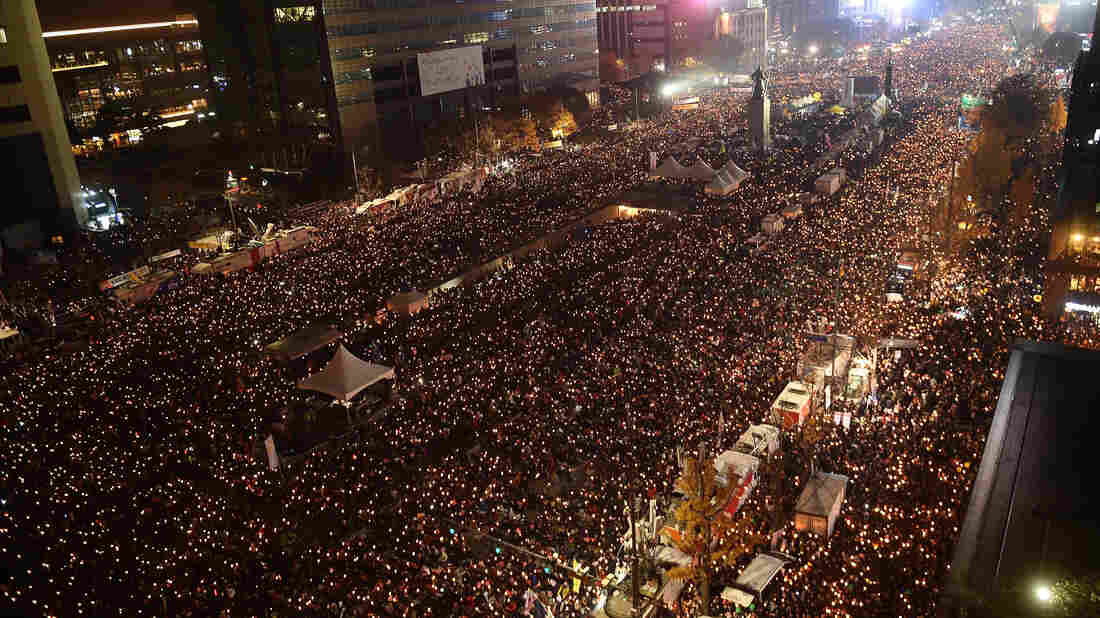 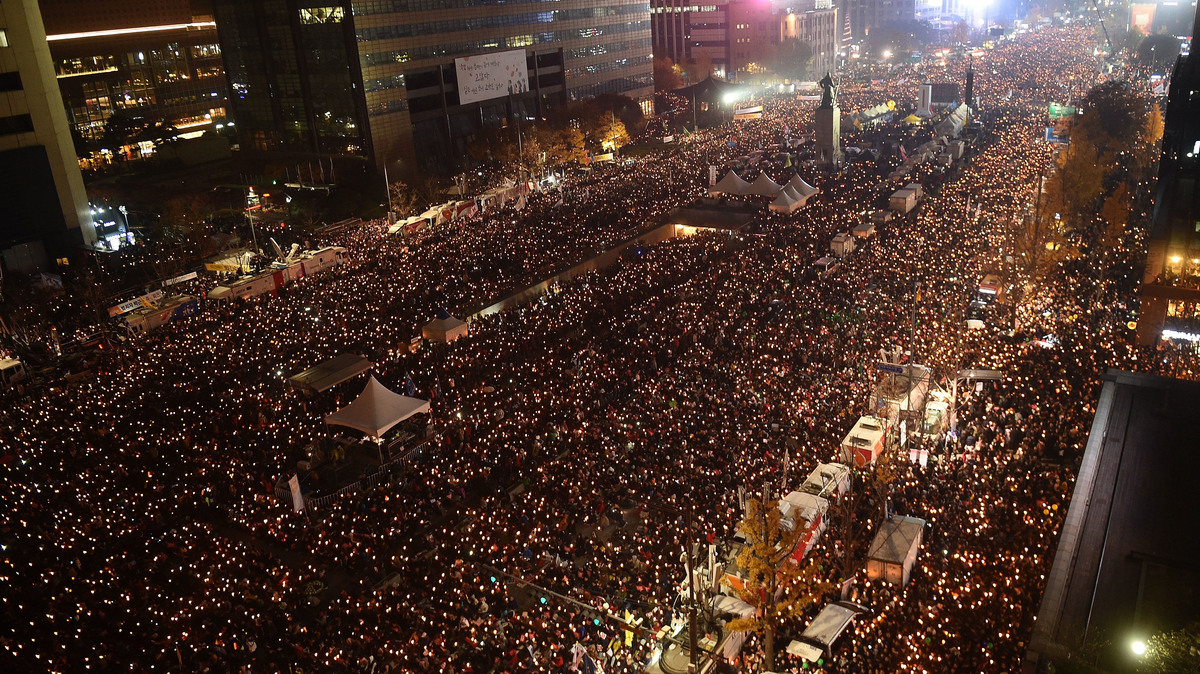 "I think Park clearly thinks that she can ride it out," says David Kang, who heads the Korea Studies Institute at the University of Southern California. He believes she'll try to hang on, as she's immune from criminal indictment until she's out of office. But the corruption scandal has driven her approval rating to 5 percent — the lowest in Korean presidential history.

"We'll see whether she can actually survive another 12 months or so," Kang says, which is about the time left before the next presidential election.

In a packed press conference Sunday, prosecutors raised the stakes, giving opponents legal ground for impeachment proceedings by accusing Park of having a "considerable" role in the influence-peddling scandal that's swallowed up her senior aides and longtime friend, Choi Soon-sil. Prosecutors believe Park was a co-conspirator in a scheme that allowed that friend, Choi, to enrich herself by using the power of the presidency to pressure South Korean companies to pony up millions in donations to Choi's non-profits.

"Based on the evidence, the special investigation team concluded that the president colluded ... for most parts of her confidant's crimes," Chief Prosecutor Lee Young-ryeol said Sunday.

Park's lawyer, in a statement, denied the allegations and called them "unfair political attacks." But Park has few allies left.

"It's not clear even who her supporters would be within [her] party itself. So this is a totally unprecedented situation in Korean politics, which is used to chaos," Kang says.