Accessibility links
As Tourists Crowd Out Locals, Venice Faces 'Endangered' List : Parallels Two years ago, UNESCO gave Venice and Italy a deadline to figure out a way to manage the harmful effects of tourism or risk being placed on a World Heritage in Danger list. The deadline has passed. 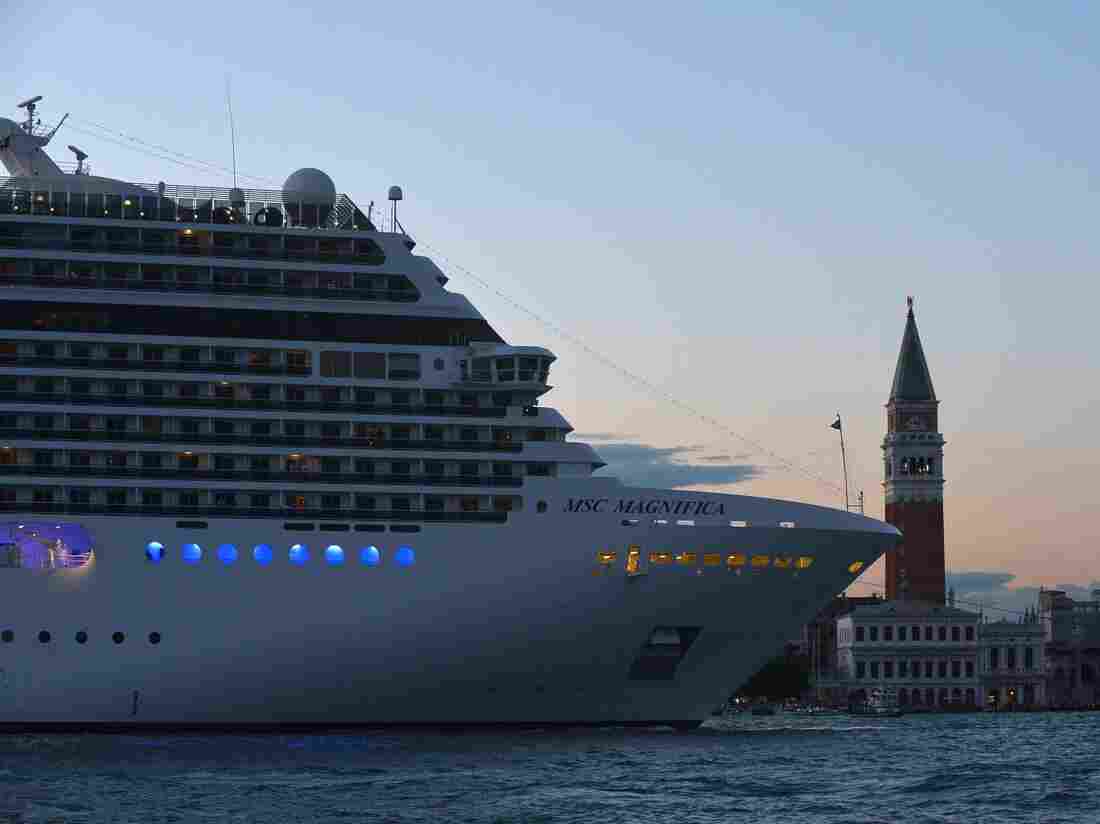 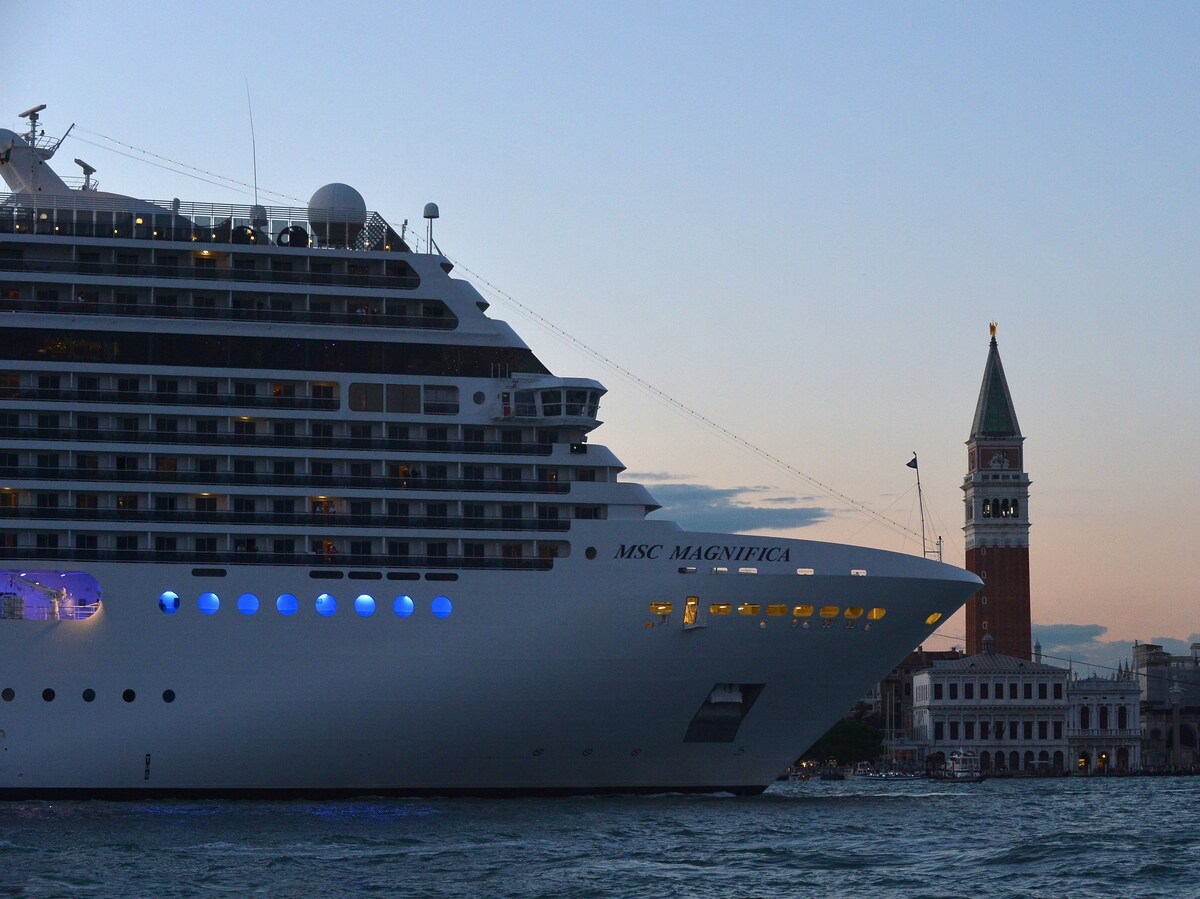 A cruise ship passes Venice's St. Mark's Square at sunset in September. Up to 90,000 tourists fill the city every day, far outnumbering the 55,000 residents.

On a recent fall morning, a large crowd clogged the steps at one of Venice's main tourist sites, the Rialto Bridge. But on this day, there was a twist: it was filled with Venetians, not tourists.

"People are cheering and holding their carts in the air," says Giovanni Claudio Di Giorgio, who helped organize the march with a grass-roots organization called Generazione '90.

The carts he refers to are small shopping carts — the symbol of a true Venetian.

"It started as a joke," he says with a laugh. "The idea was to put blades on the wheels! You know? Like Ben Hur. Precisely like that, you just go around and mow people down."

Venice is on many bucket lists. But that's a problem. Up to 90,000 tourists crowd its streets and canals every day — far outnumbering the 55,000 permanent residents. 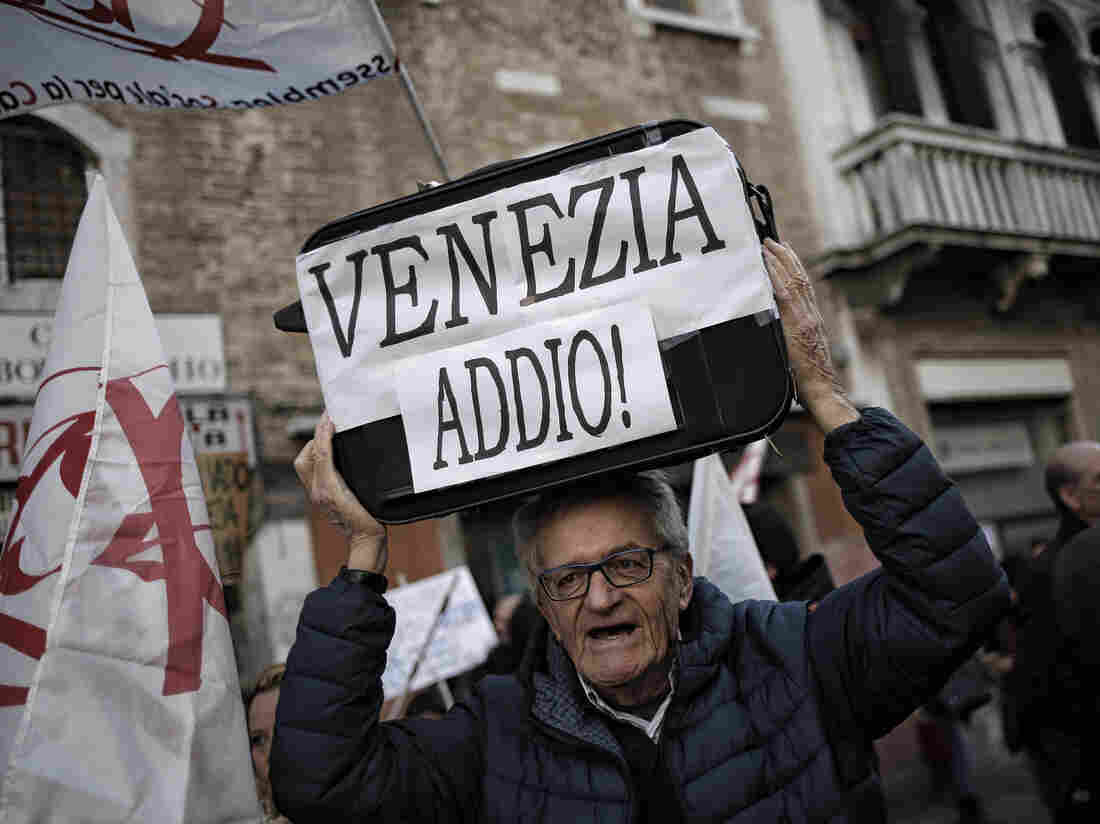 A man holds a suitcase saying "Goodbye Venice!" during a Nov. 12 demonstration against the increasing number of tourists. Marco Bertorello/AFP/Getty Images hide caption 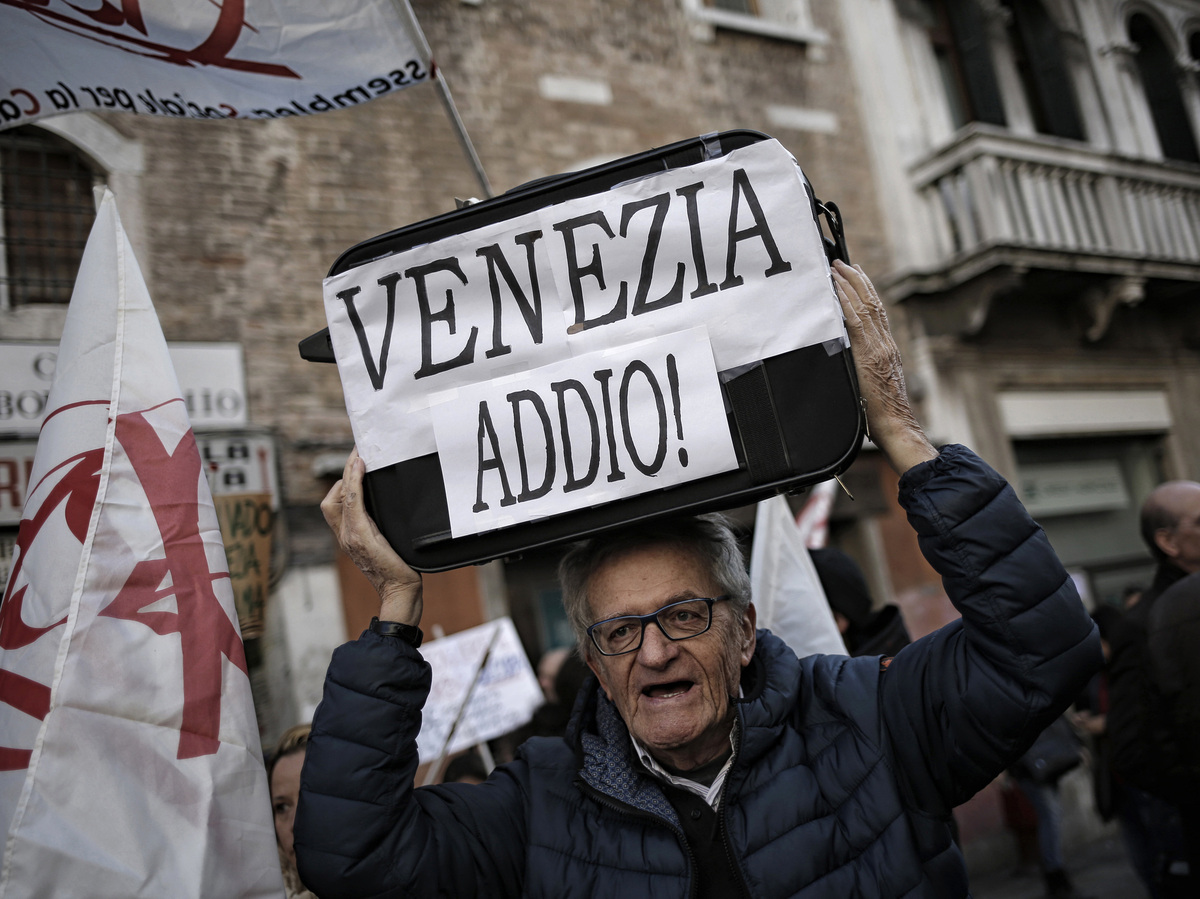 A man holds a suitcase saying "Goodbye Venice!" during a Nov. 12 demonstration against the increasing number of tourists.

The tourist influx is one key reason the city's population is down from 175,000 in the 1950s. The outnumbered Venetians have been steadily fleeing. And those who stick around are tired of living in a place where they can't even get to the market without wading through a sea of picture-snapping tourists.

Laura Chigi, a grandmother at the march, says the local and national governments have failed to do anything about the crowds for decades, because they're only interested in tourism — the primary industry in Venice, worth more than $3 billion in 2015.

"Venice is a cash cow," she says, "and everyone wants a piece."

Just beyond St. Mark's Square, a cruise ship passes, one of hundreds every year that loom over their medieval surroundings. Their massive wake churns up the lagoon bottom, destabilizing the foundations of the centuries-old buildings themselves.

"Every time I see a cruise ship, I go into mourning," Chigi says. "You see the mud it drags, the destruction it leaves in its wake? That hurts the ancient wooden pylons holding up the city underwater. One day we'll see Venice crumble down."

For a time, UNESCO, the cultural wing of the United Nations, seemed to agree. Two years ago, it put Italy on notice, saying the government was not protecting Venice. UNESCO considers the entire city a World Heritage Site, a prestigious honor that means Venice, at the cultural level, belongs to all of the world's people.

In 2014, UNESCO gave Italy two years to manage Venice's rampant tourism or the city would be placed on another list — World Heritage In Danger, joining such sites as Aleppo and Palmyra, destroyed by the war in Syria.

Venice's deadline passed with barely a murmur this summer, just as UNESCO was meeting in Istanbul. Only one representative, Jad Tabet from Lebanon, tried to raise the issue. 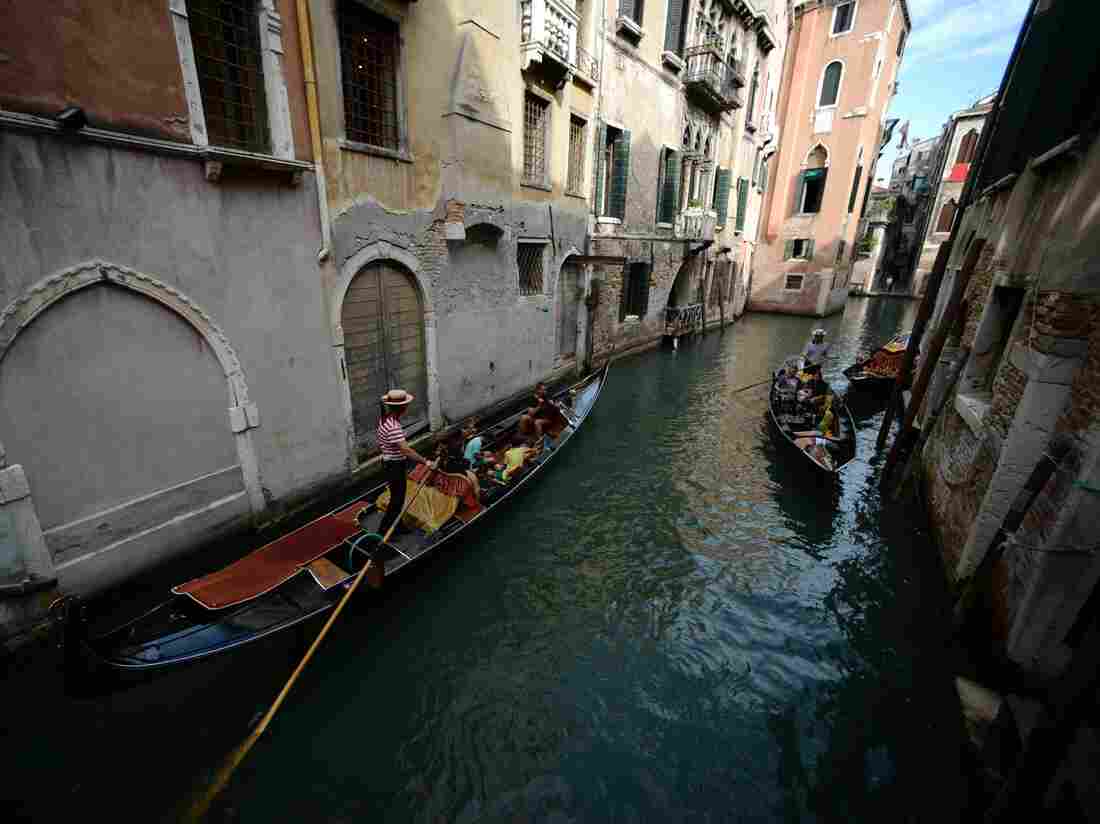 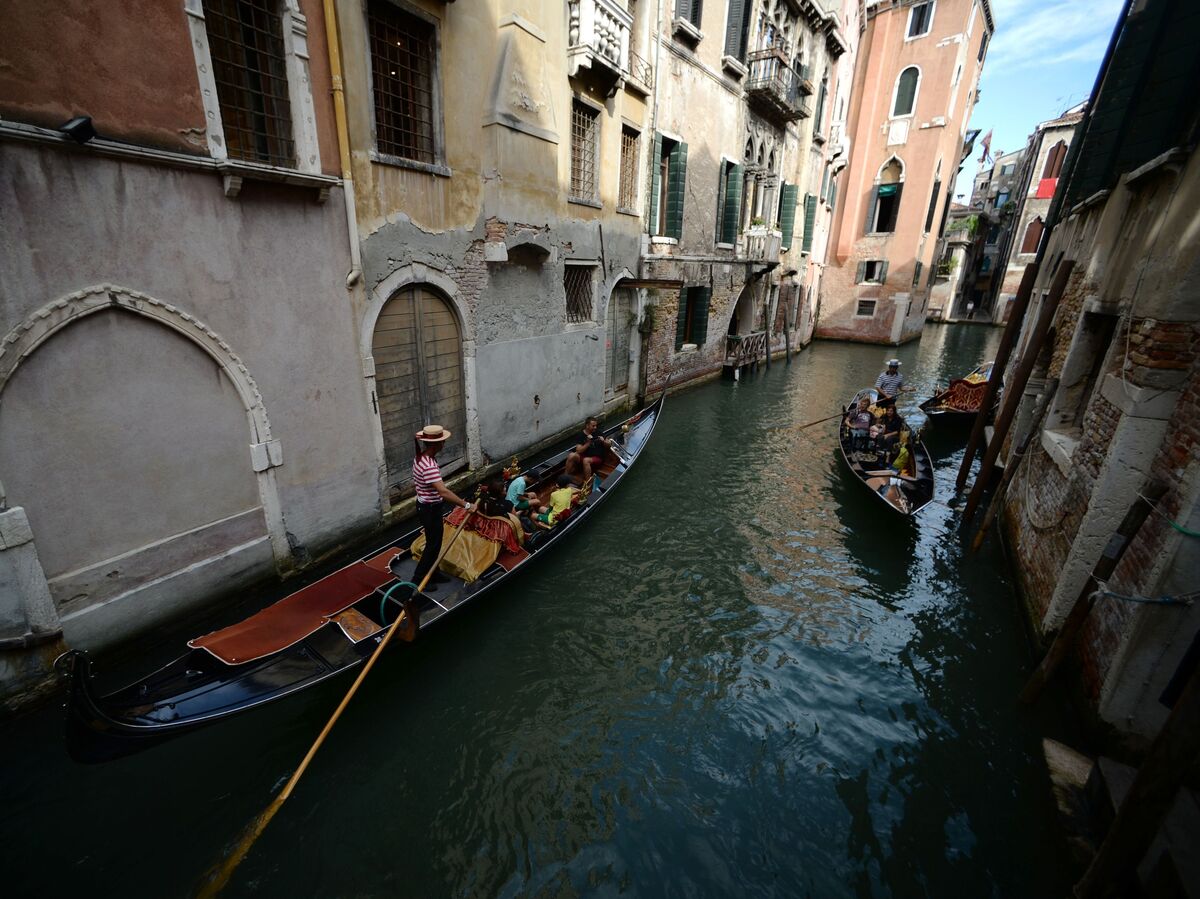 A gondola sails in a Venice canal in September.

"For several years, the situation of heritage in Venice has been worsening, and it has now reached a dramatic situation," Tabet told UNESCO. "We have to act quickly."

But UNESCO didn't even hold a vote.

"It's been postponed until 2017," says Anna Somers Cocks, the founder and CEO of The Art Newspaper and the former head of Venice in Peril, a group devoted to restoring Venetian art.

She says the main reason the U.N. cultural organization didn't vote to declare Venice a World Heritage Site in Danger is because UNESCO has become "intensely politicized. There would have been some back-room negotiations."

Italy boasts more UNESCO World Heritage Sites than any other country in the world, granting it considerable clout and influence within the organization. The former head of the UNESCO World Heritage Centre, which oversees heritage sites, is Francesco Bandarin, a Venetian who now serves as UNESCO's assistant director-general for culture.

Earlier this year, Italy signed an accord with UNESCO to establish a task force of police art detectives and archaeologists to protect cultural heritage from natural disasters and terror groups, such as ISIS. The accord underlined Italy's global reputation as a good steward of art and culture.

But adding Venice to the UNESCO endangered list — which is dominated by sites in developing and conflict-ridden countries — would be an international embarrassment, and could even hurt Italy's lucrative tourism industry.

The Italian Culture Ministry says it is unaware of any government efforts to pressure UNESCO. As for the organization itself, it declined a request for an interview.

The city's current mayor, Luigi Brugnaro, has ridiculed UNESCO and told it to mind its own business, while continuing to support the cruise ship industry, which employs 5,000 Venice residents. 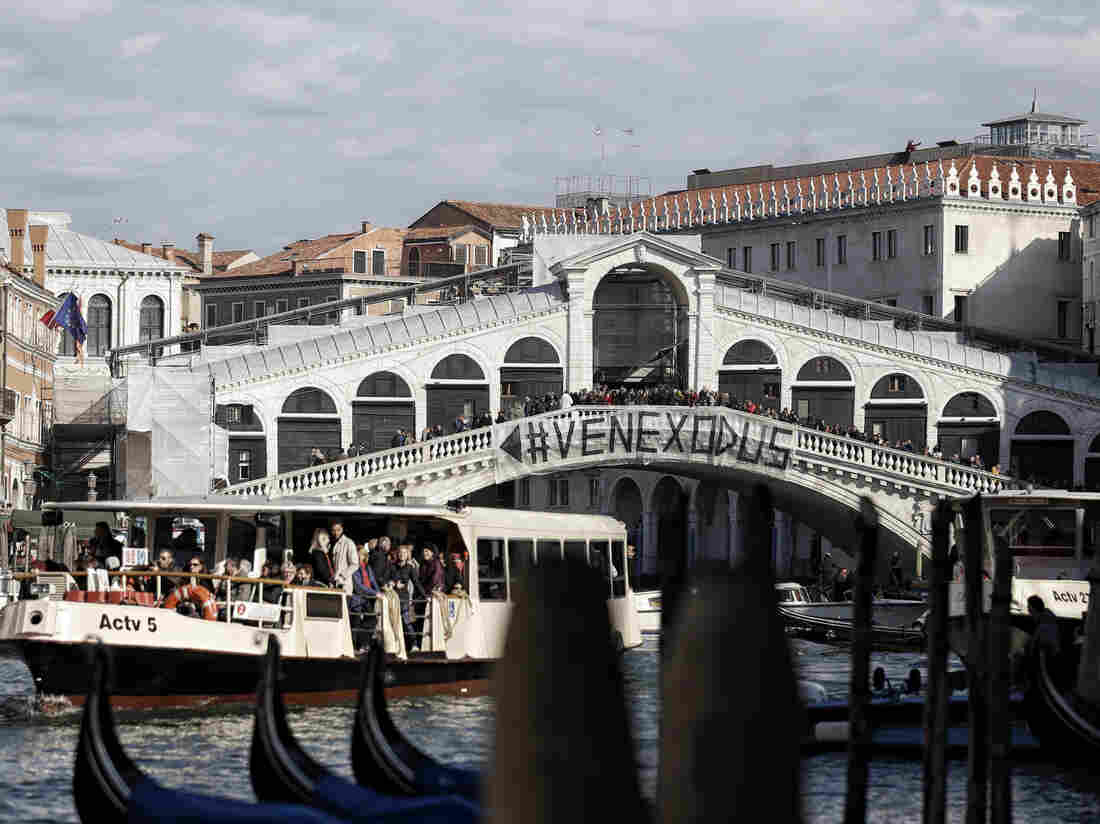 People gather on the Rialto Bridge to protest on Nov. 12 against the increasing number of tourists in Venice. Marco Bertorello/AFP/Getty Images hide caption 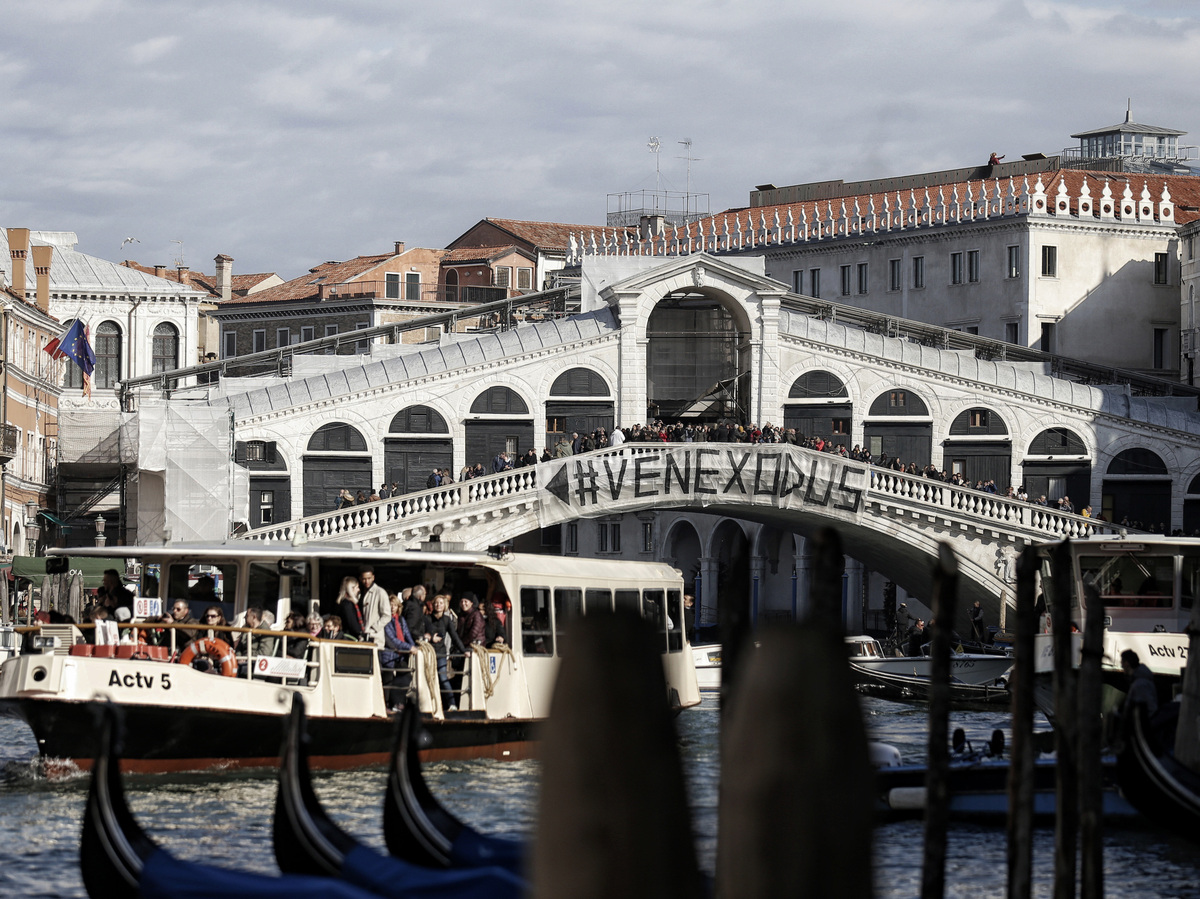 People gather on the Rialto Bridge to protest on Nov. 12 against the increasing number of tourists in Venice.

As for Venetians, they're exasperated.

"It's a nightmare for me. Some situations are really difficult with tourists around," says Di Giorgio as he navigates around a swelling crowd at the Rialto Bridge.

Then it hits him: This crowd isn't made up of tourists. They're Venetians. Di Giorgio says he's never experienced the Rialto Bridge this way in all his 22 years.

"For once, we are the ones who are blocking the traffic," he rejoices. "It feels unreal. It feels like we're some form of endangered species. It's just nice. The feeling is just pure."

But, he worries, if tourism isn't managed and his fellow locals continue to move to the mainland, his generation might be the last who can call themselves native Venetians.