Accessibility links
Stark Choice For NATO's Turkish Officers: Arrests At Home, Limbo In Europe : Parallels Turkish officers in Brussels say their government is firing them and sending them home. Some are in hiding or seeking asylum, fearing imprisonment or worse. They deny they were part of a coup attempt. 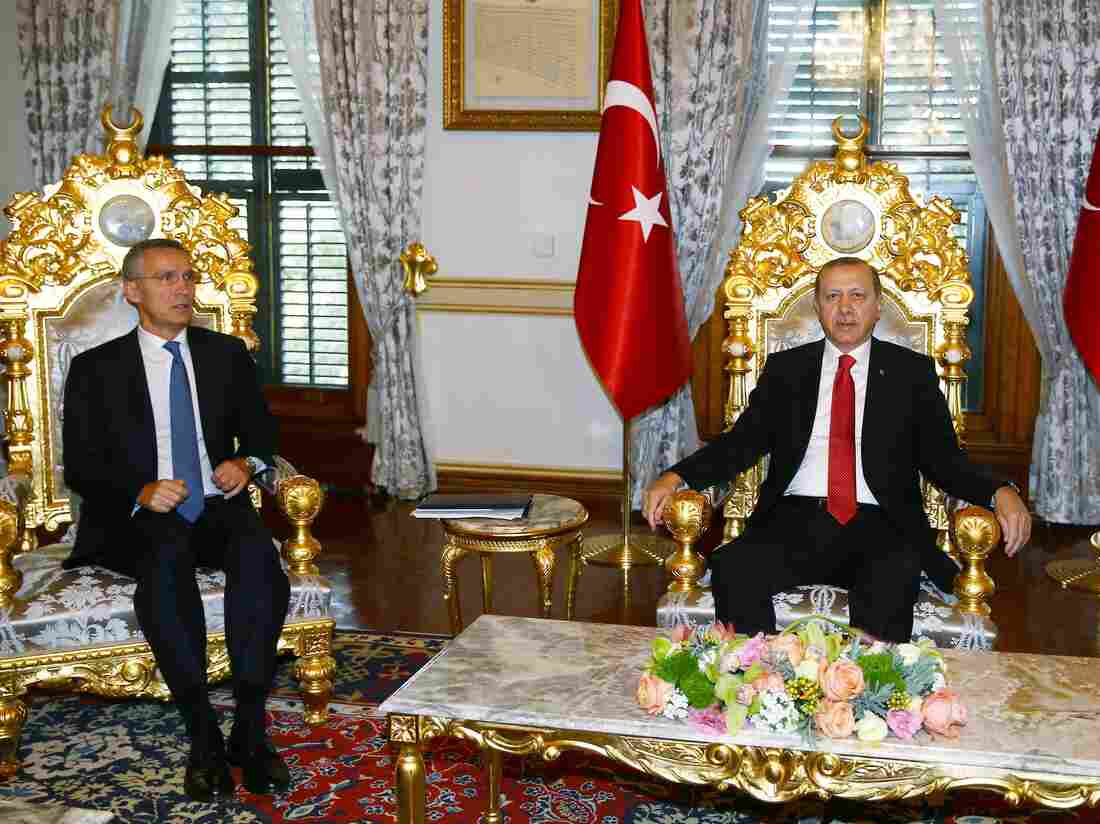 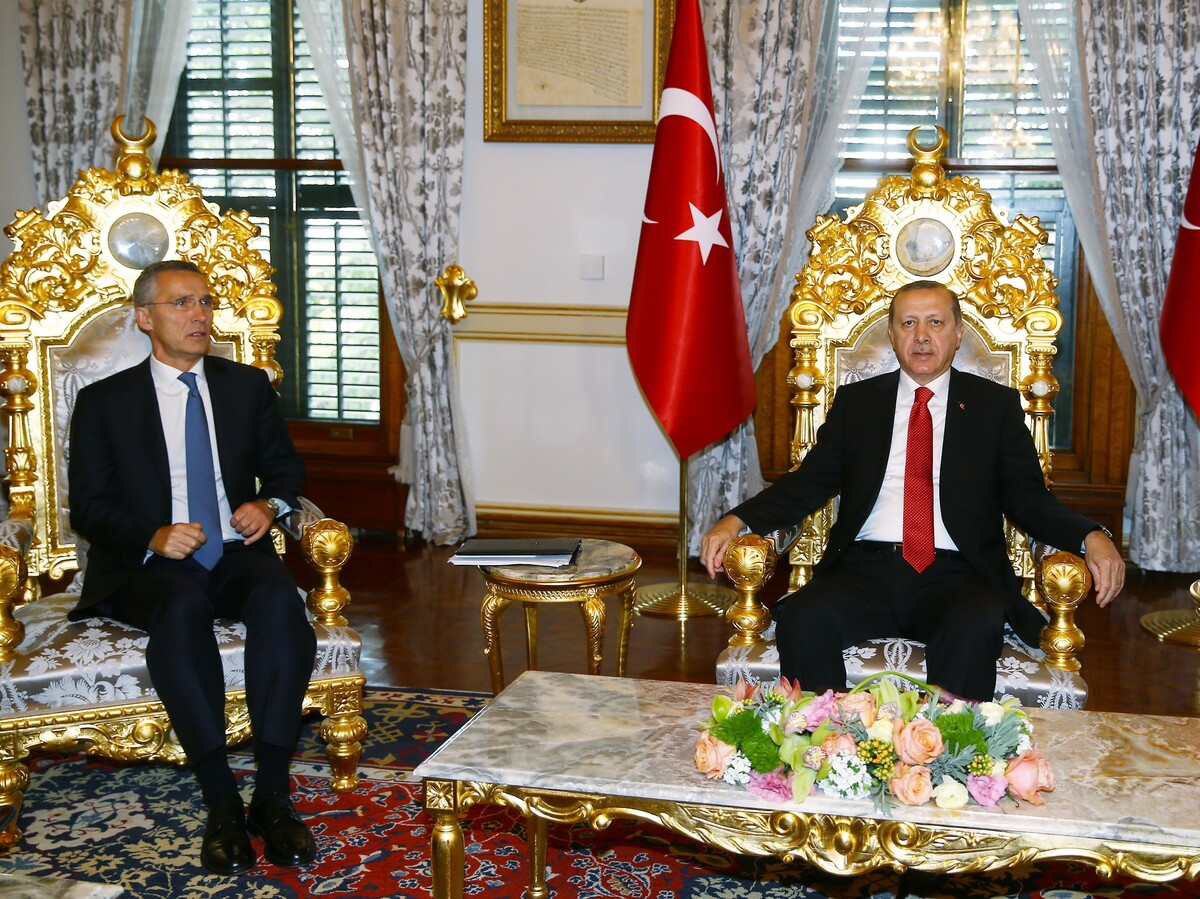 Hundreds of Turkish military personnel working for NATO have been accused by their government of trying to overthrow Turkey's President Recep Tayyip Erdogan in July. Since that failed military coup attempt, in which 260 people were killed, high-ranking officers at NATO installations across Europe and the U.S. have been summarily fired or had their foreign assignments curtailed.

In Brussels, several Turkish officers, who until recently had been assigned to NATO, spoke with NPR and requested anonymity out of fear of retaliation. They describe a tense situation in which they and their colleagues tried to continue doing their jobs at NATO headquarters, all the while fearing the next publication of the Turkish government's ever-growing lists of supposed coup sympathizers.

Some 110,000 government bureaucrats, teachers, journalists, soldiers and others have been detained, fired or suspended from their jobs in Turkey on suspicion of aiding or sympathizing with the coup attempt.

Once their names appeared on lists, which turned up in September, the Turkish officers say they were expected to quit work, turn in their diplomatic passports and receive documents allowing them travel back to Turkey — one-way only.

"There were two orders," says one officer whose name appeared on a list that emerged Sept. 27. "The first one told us our tenures were ended; there were 221 names on that list." A few days later, he says, "The second order added more names and said we were all under investigation and should return to the 'homeland' immediately. There were no charges given."

Initially, he says, no one was sure what to do.

"Our first reaction was to go back and defend ourselves as were innocent of any anti-government activity," he says. "We said goodbye to our colleagues at NATO. Then we heard that 17 of our colleagues who did return had been arrested. So we thought it would be better to wait."

Those who have not yet decided what to do remain in limbo — no longer NATO employees but stateless, jobless people with no legal status.

Turkish military officers may be at risk even if they are not on a Turkish government list of suspects.

The Turkish mission to NATO said it had no information on the suspensions, firings or asylum requests by military personnel who had been serving in posts at the Brussels headquarters.

One Turkish officer in NATO whose name did not appear on a list was called back to the capital, Ankara, for an Oct. 12 meeting. Despite being concerned about the situation in Turkey, his wife says, "Neither he nor I were nervous about the trip." But the next day, when he didn't come home to Brussels, "I suspected something had gone very wrong," she says. And when she couldn't reach him directly, she knew for sure.

Even her husband's NATO supervisors were unable to get an explanation from Turkish officials. Finally, a message was passed through friends: The "meeting" had been a ploy. Her husband had been arrested, accused of supporting a terrorist organization, something his wife denies.

His family in Brussels has received no money since then. His wife has no way to support three children once their savings run out. Worst of all, she has no idea how how her husband is or what will happen next.

Turkish officers say Erdogan has threatened them in a public address, warning that those who do not obey orders to return home will be found.

"How can a terrorist, a terrorist soldier, a soldier who has been involved in plotting a coup, be employed in NATO?" Erdogan said Monday. His remarks were reported in the Turkish newspaper Milliyet.

One Turkish officer in Brussels described what is happening in a goodbye letter to his NATO colleagues that he called the "silent scream of a Turkish officer."

"Like my other Turkish colleagues," he wrote in the letter, which he shared with NPR, "my dismissal does not mean only losing my job. I have lost almost my all military IDs, passport, social rights, health coverage, bank accounts, retirement pension, working rights etc. And more sadly, I am left by myself without any past and unfortunately without any future."

"My individual losses are nothing compared with my country's losses," he said.

He and the other officers who spoke with NPR all say they had absolutely nothing to do with the July coup attempt. They say their NATO colleagues know this and that NATO Secretary General Stoltenberg should understand it, too.

Asked about the situation at a news conference that day, Stoltenberg said, "NATO is based on some core values, democracy, the rule of law, individual liberty, and I expect all allies to live up to those values."

Stoltenberg met Erdogan Monday after giving a speech at the NATO parliamentary session in Istanbul in which he did not mention Erdogan's crackdown.

One of the affected Turkish officers, who worked at NATO for years, says the 28-member organization is only as strong as its weakest link. He believes that is now Turkey.

Another officer, who is now in hiding, notes that the NATO founding document includes a reference to respect for human rights. He believes if NATO abandons Turkish officers wrongly accused of treason, it is also abandoning its own values.