Accessibility links
In Philippine Drug War, Death Toll Rises And So Do Concerns About Tactics : Parallels Since the war on drugs began, some 5,000 people have been killed, 2,000 by police and 3,000 in extrajudicial killings. Reporter Michael Sullivan has been following the war in one Manila neighborhood. 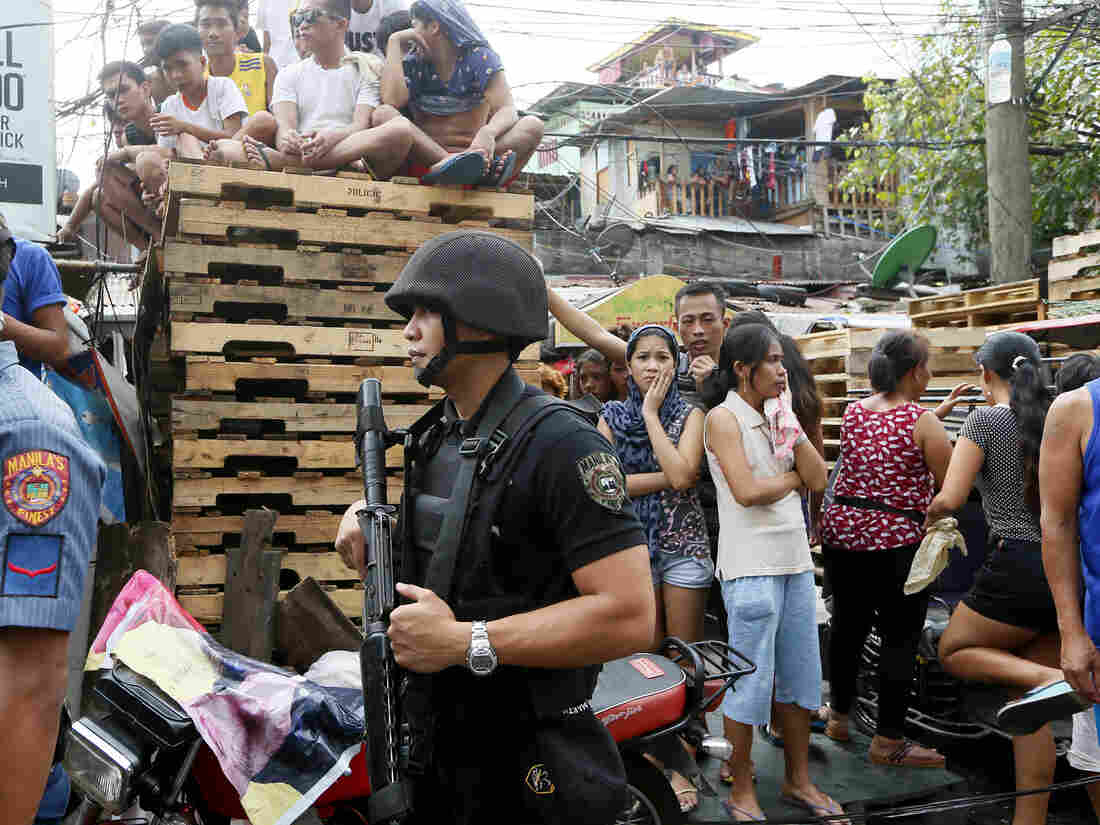 A police SWAT team member stands guard while residents watch the body of a person killed in an alleged police anti-drug operation in Manila on Nov. 10. Bullit Marquez/AP hide caption 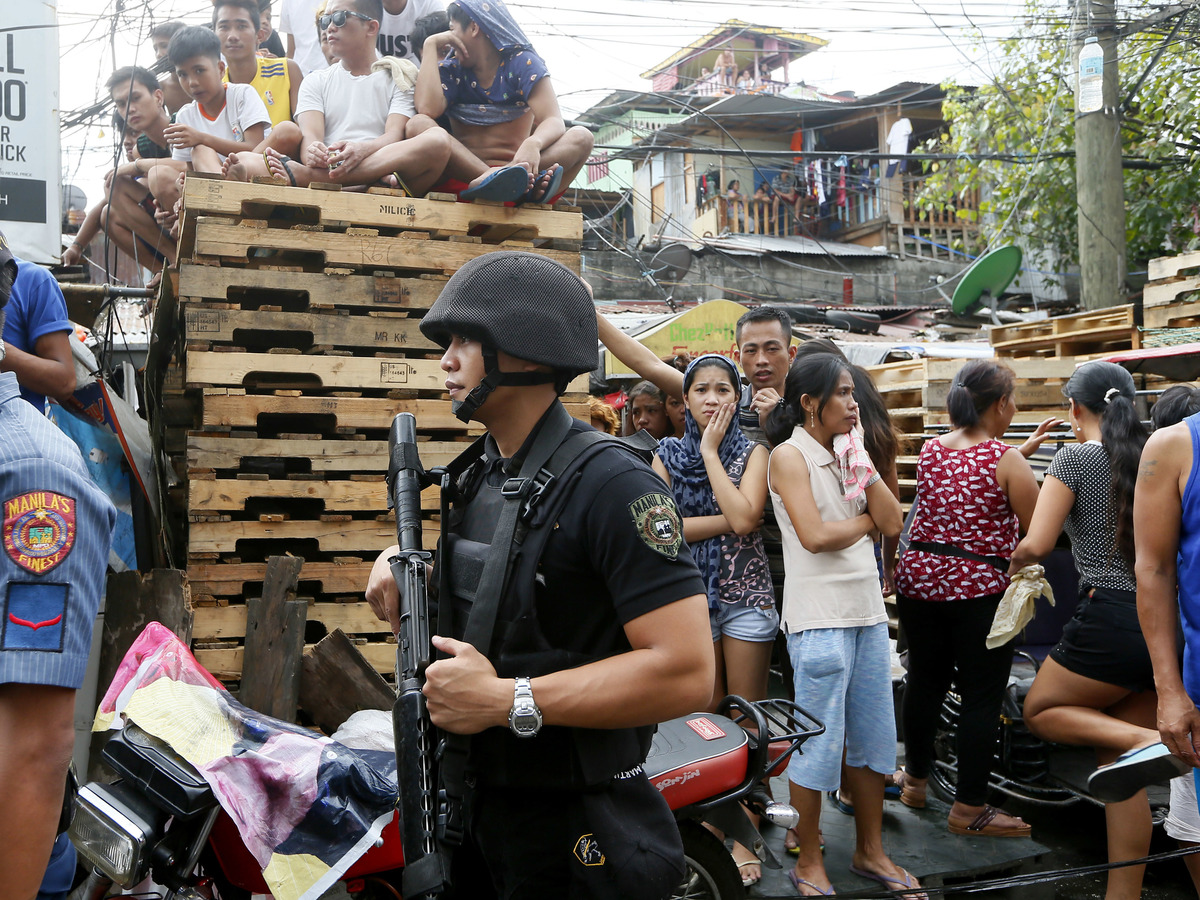 A police SWAT team member stands guard while residents watch the body of a person killed in an alleged police anti-drug operation in Manila on Nov. 10.

Sabulao is not in trouble anymore.

"We've recorded 12 dead," he says, with dozens more arrested. In one of the most recent encounters, Sabulao had a close call when a suspect fired at him with a .38 caliber revolver.

His vest saved him, Sabulao says, unbuttoning his shirt to show me the bruise. One of his men was wounded in the shoulder.

"Did you shoot the guy who shot you?" I ask.

"Twice," Sabulao says with a laugh. "I shot him until he was down."

In fact, all four of the suspects that day were killed. Sabulao says he'd rather not kill people. But he insists all the shootings were justified.

"Sometimes we can't avoid it, that in legitimate police operations, some of those we arrest fight back," he says. "And probably because residents here are already scared, we've minimized deaths of those who are from here. Many, almost half, of those who get killed fighting back are not from my area." They're just passing through, he explains.

Philippine President Rodrigo Duterte was elected in May promising a "bloody war" on drugs. Since he took office in June, he has made good on that pledge. Roughly 5,000 people have been killed since the war on drugs began in July, according to the Philippines National Police. Two thousand were killed in encounters with police and 3,000 in extrajudicial or vigilante-style killings.

The war on drugs has brought international criticism. But in the Philippines, Duterte's popularity remains high, and crime in Manila neighborhoods like Malate, where Sabulao works, has plummeted.

But the lack of due process is still troubling, especially to the families of the dead. Marcelina Mallari's son Robert was one of the 12 killed by Sabulao's men. She insists her son didn't abuse or buy drugs.

"He was already rehabilitated many years ago," she says. "He's not using anymore."

Marcelina says her 51-year-old son was mentally ill and survived mainly by recycling cans and bottles from the neighborhood for a few pesos a day. On the night he was killed, police say Mallari was attempting to buy methamphetamine — known locally as "shabu" — from a dealer. Police approached them.

When the dealer pulled out a gun and fired, police say, they returned fire, killing both men.

Mallari's sister Gina tells a different story. According to bystanders, she says, Robert wasn't even with the dealer. He was sleeping nearby in an empty jeepney and came out when he heard the shot.

Mallari's mother says it's obvious what happened: The police were targeting the pusher, she says. And her son got in the way.

"He will be a witness, because he saw," she says. "That's why he was killed also. And it's useless to protest to police, because they invent stories. So we did not try to complain." 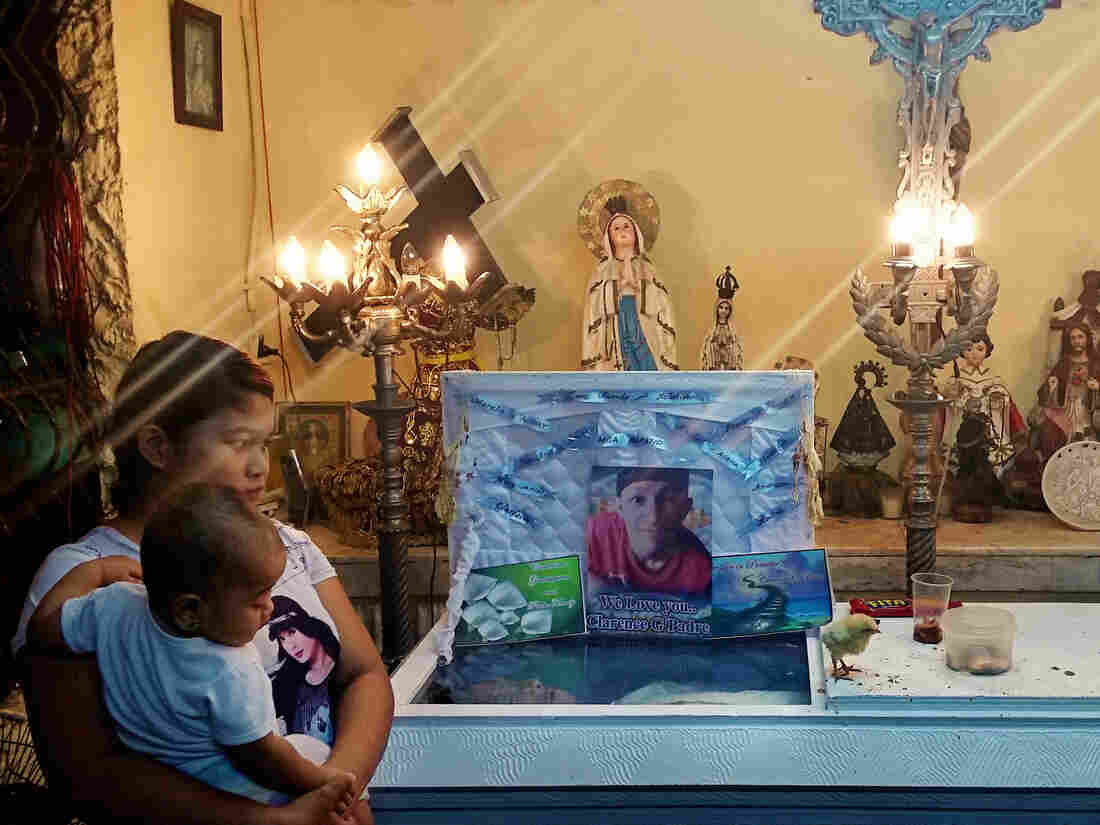 Clarence Jepadre's girlfriend Rachel Quebec stands with daughter Roseann in front of his casket. A chick paces on the coffin's lid. Jepadre, 17, was found stabbed to death. It's a tradition to place chicks on the coffins of murder victims to peck at the conscience of the killer. Michael Sullivan for NPR hide caption 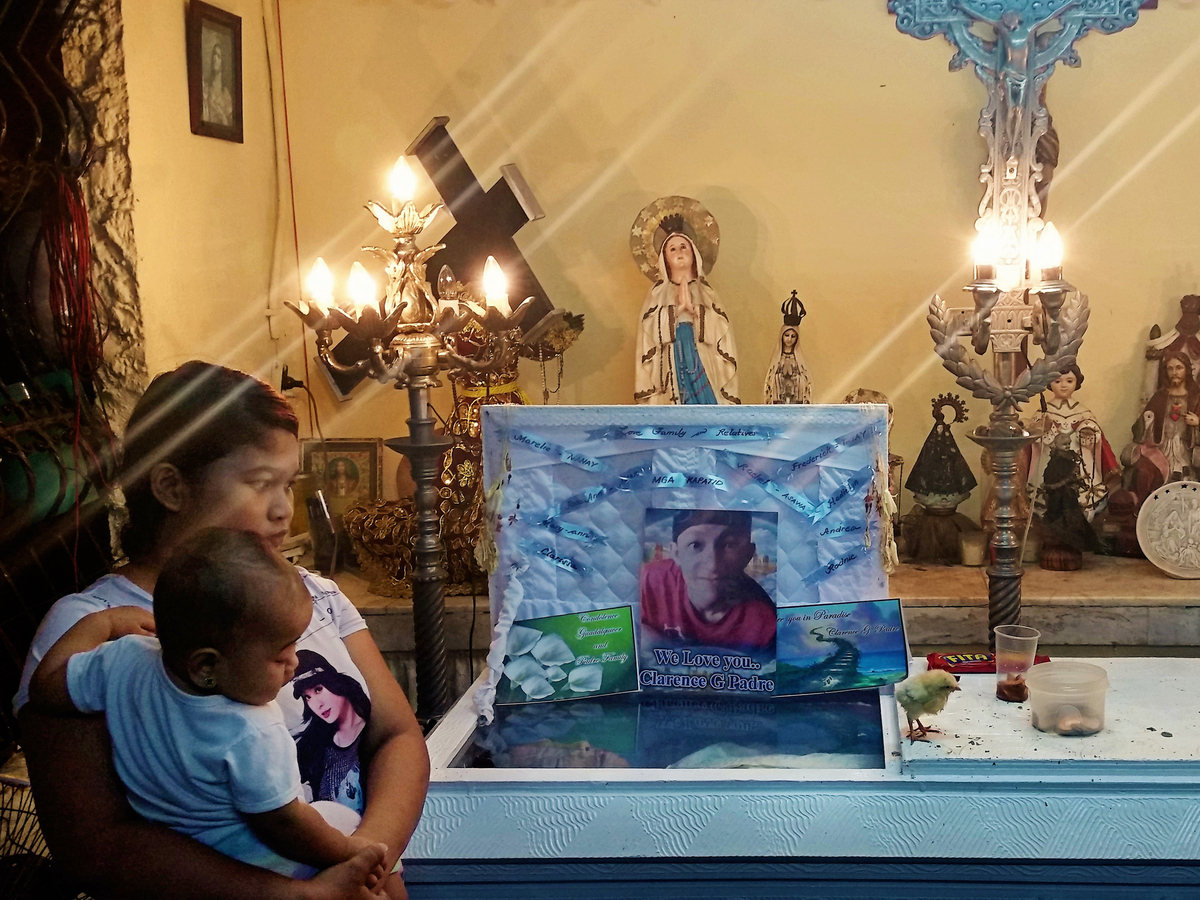 Clarence Jepadre's girlfriend Rachel Quebec stands with daughter Roseann in front of his casket. A chick paces on the coffin's lid. Jepadre, 17, was found stabbed to death. It's a tradition to place chicks on the coffins of murder victims to peck at the conscience of the killer.

At least Marcelina Mallari knows how her son died. In the war on drugs, most killings remain unsolved.

A few cramped alleys away, the family of Clarence Jepadre sits in front of his casket outside the district captain's office. Neighbors are playing bingo nearby.

A small chick paces back and forth on the lid of Jepadre's coffin. It's a tradition here to place chicks on the coffins of murder victims to peck at the conscience of the killer.

Jepadre was just 17 when he died. His girlfriend stands next to the casket, clutching their 6-month-old daughter. His aunt, Jennlyn Raguindin, says police found his body across town. He'd been stabbed nine times, wrapped in plastic and dumped in an alley.

"When they recovered the body of my nephew, they saw a piece of paper with a note: 'I'm a pusher. I'm a house robber. Don't be like me,'" she says.

There was also a small packet of marijuana. The police have told the family they have no clue who was responsible.

It's a scene repeated all over Manila, and all over the Philippines, since the war on drugs began.

And it's this part that bothers 27-year-old Cindy Medrano, who helps in the family restaurant down the street from Inspector Sabulao's station. She's "50-50," she says, on the war on drugs. She likes that there's less crime. But she doesn't like the way it has come about.

"I disagree with extrajudicial killings, period," she says. "Because there is still the law. Everyone should have his day in court."

And besides, she says, so far it's just the small fry getting killed, not the drug lords.

I go down the street and another alley to check in with Lilibeth Diego, not far from Sabulao's office. Diego, a 53-year-old meth addict since high school, is one of the first people I spoke with here in September.

When the war on drugs started, Diego surrendered, one of the 730,000 users who've done so since July. Most were sent home by police with instructions to stay clean — or else. She says she has. And she keeps going to Zumba classes every Sunday, as authorities instructed. But it has been hard.

"Withdrawal," she says. "My body hurt all the time, I couldn't sleep and I could barely stand up."

She's better now, she says. But she misses the drug.

On meth, Diego could work 14 hours a day, from 7 a.m. to 9 p.m., earning money doing laundry for people. Now, she says, all she does is lie around sleeping or watching DVDs. She's making no money.

Her children are happy she's not using, she says. But she's miserable. If she weren't so afraid of the cops, she'd start using again in a minute, she says.

But she's got a plan.

"President Duterte's got six years," she says. She's going to wait him out. She hopes the war on drugs will go away when he does.