Accessibility links
At A Makeshift Iraqi Court, Harsh Justice For Those Accused Of Aiding ISIS : Parallels Working in difficult circumstances, lawyers and judges do their best to administer justice. NPR was present at a trial of a man accused of repairing ISIS vehicles. He and relatives denied ISIS links. 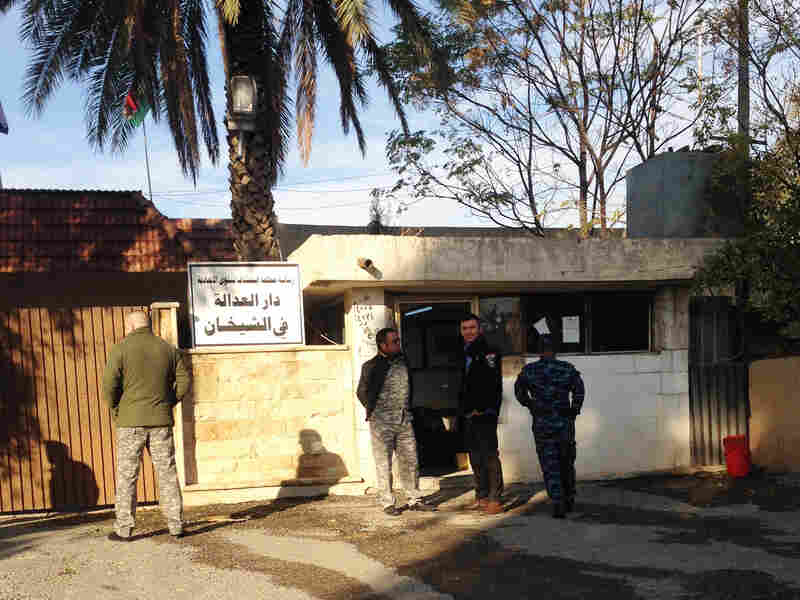 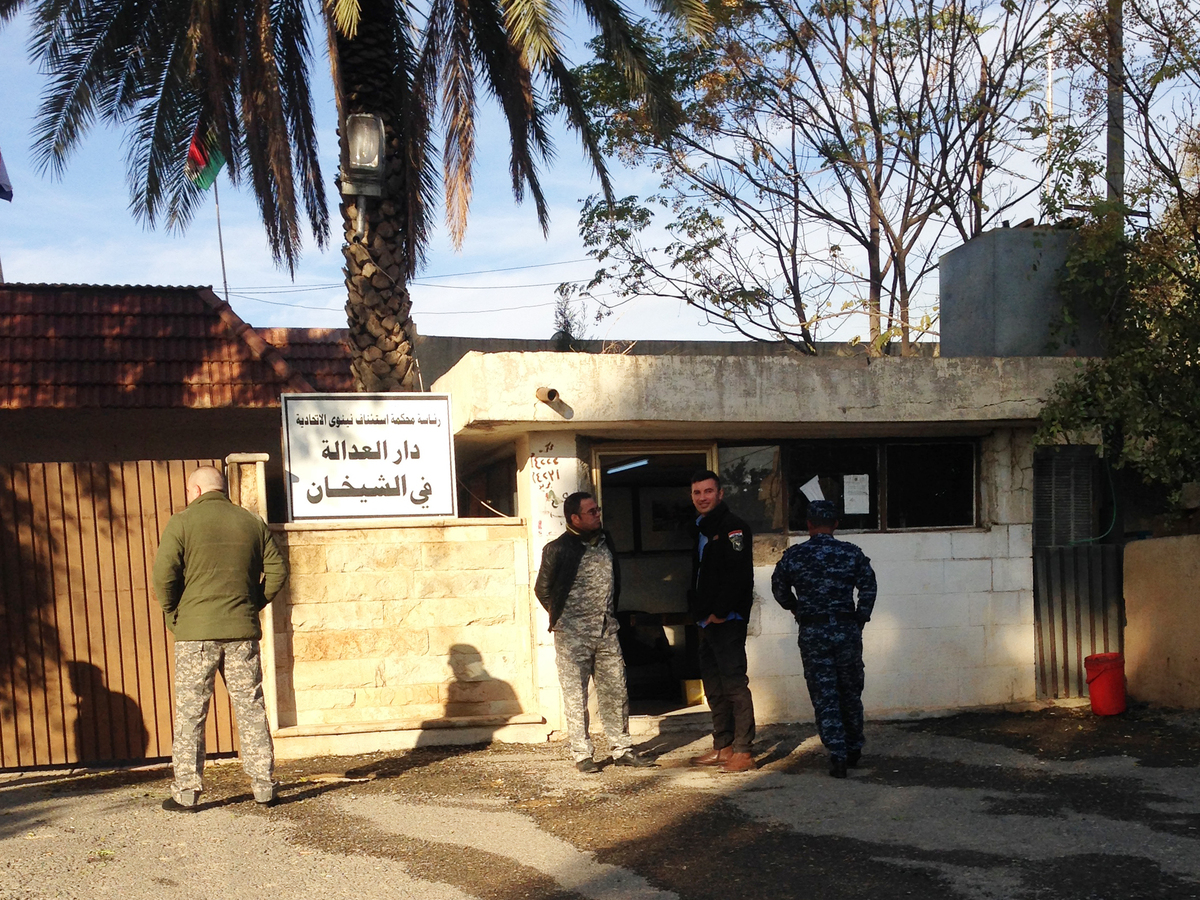 The Sheikhan criminal court occupies a municipal office building north of Mosul. Cases are heard after long delays and defense attorneys have limited contact with their clients.

In the battle for Mosul, Islamic State fighters who aren't killed are usually taken away for questioning by Iraqi or Kurdish intelligence. But there are also local Iraqis accused of helping ISIS — and they're put through a judicial process of sorts.

One such case was heard recently in a makeshift courthouse, where a displaced judge from Mosul presides.

The Sheikhan criminal court occupies a municipal office building north of Mosul. The courtroom is a medium-sized office with light brown paneling and four desks.

Judge Muhdi Salah Suleiman was among those who fled Mosul in 2014, after the city was overrun by ISIS fighters. He adjusts his red-trimmed black robes and addresses the slender man standing in front of him, head bowed.

The defendant is Abu Mohammad, a 33-year-old villager from Salahadin Province, southeast of Mosul. The judge tells him he's accused of providing material assistance to ISIS by fixing their fighters' cars for money.

It's a serious charge, and the judge wants to know how Abu Mohammad pleads.

"I swear I'm not guilty, I swear it," Abu Mohammad says, before being led away. The judge has already heard from the defendant's brother, sister and wife, who all told the tale of how the family fled as ISIS forces advanced. They differed on some of the details, but all agreed that Abu Mohammad never helped ISIS.

During a break, his wife, Umm Mohammad — NPR agreed to use their traditional names and not their legal names, so as not to expose the family to retaliatory attacks — insists she's certain her husband didn't support ISIS in any way.

"No, no, no, it's not true, he never had any relationship with Daesh," she says, using an Arabic name for ISIS. "He can't even read or write, he doesn't drive, how can he fix their cars?"

When the session resumes, defense attorney Rabah Attiyeh gets his one chance to address the court. His client was arrested roughly a year-and-a-half ago, but this is the first time he's been able to meet him.

The court has previously heard from police that when they arrested Abu Mohammad, he confessed to fixing ISIS vehicles for cash in Mosul.

Attiyeh reads a brief written statement, reminding the court that confessions can be coerced by torture. Minutes later, Abu Mohammad is again standing before the judge.

It's not good news.

The judge sentences Abu Mohammad to 15 years in jail — minus the one year-plus he's already served while waiting for his trial. He appears to be in shock as he walks stiffly out of court. The judge says he saw no sign of torture and had no reason to doubt the original confession.

It's a case that raises questions of due process: It's not clear where the initial allegation against Abu Mohammad came from, he faced a lengthy delay between arrest and trial and didn't get to see his attorney until the day of the verdict.

But it is at least a state-sanctioned effort at administering criminal justice under extremely difficult circumstances.

Judge Suleiman says a shortage of judges partly accounts for the long delays. And while the judge and his staff do collect their salaries, there's no money for heating, paper, supplies — everything has to be scrounged locally to keep the court running.

It routinely takes more than a year to bring a case to trial, and none of the cases that reached this court in the past two years involved actual ISIS fighters, either Iraqis or foreigners. The judge says he doesn't know where the ISIS fighters wind up, though there's supposed to be a system in place.

I'm reminded of a recent scene I witnessed in front of the West Emergency Hospital in Erbil, 50 miles away: A suspected ISIS supporter was hustled out the door in handcuffs, and as intelligence officers eased him into a waiting car, I asked one of them if he'd be appearing in a courtroom anytime soon.

He smiled, shook his head and said, "No, I don't think so," before driving off.