Accessibility links
Spanish Schoolkids Go On Homework Strike, With Their Parents' Blessing : Parallels Children in Spain, facing up to three hours of homework a night, have put down their pens and pencils in protest. "We all want our children to succeed," says one father who supports the strike.

Listen · 3:34 3:34
Kids In Spain Rebel Against Homework, And Parents Are Their Biggest Boosters 3:34 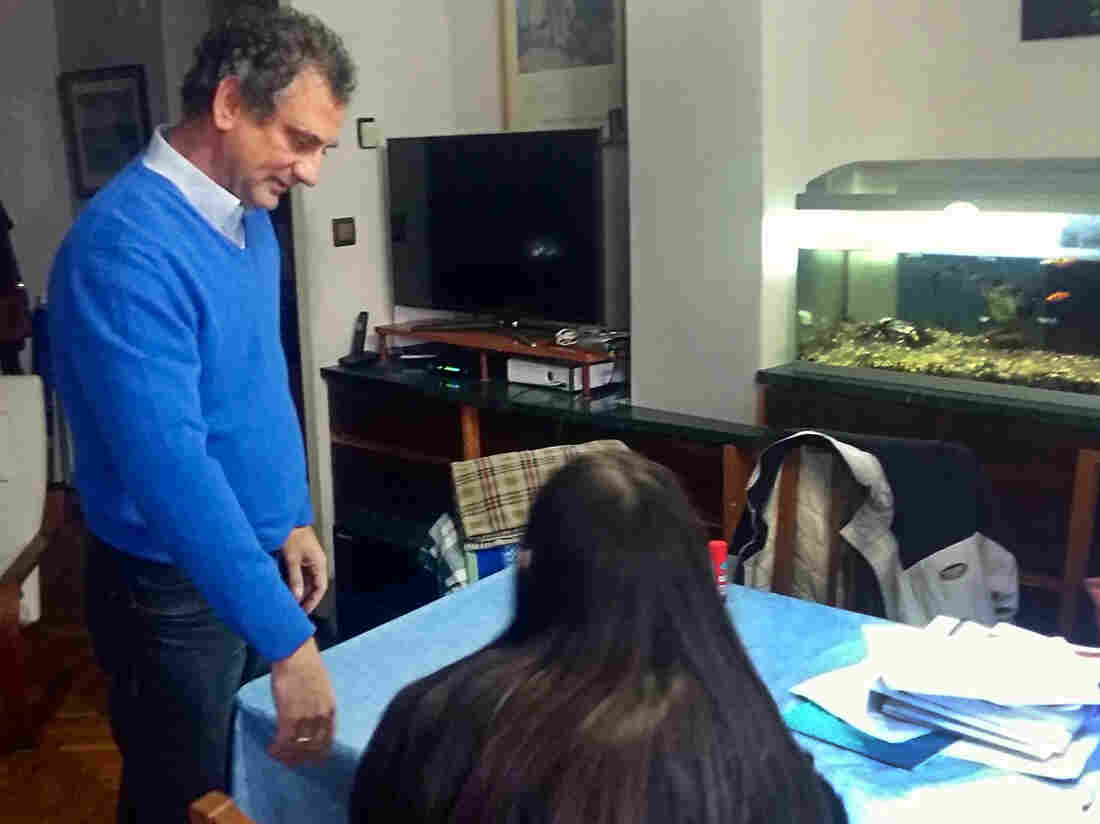 Camilo Jené, 51, watches as his daughter Clara, 14, does her homework at their dining table. She refuses to do homework on weekends now. Lauren Frayer for NPR hide caption 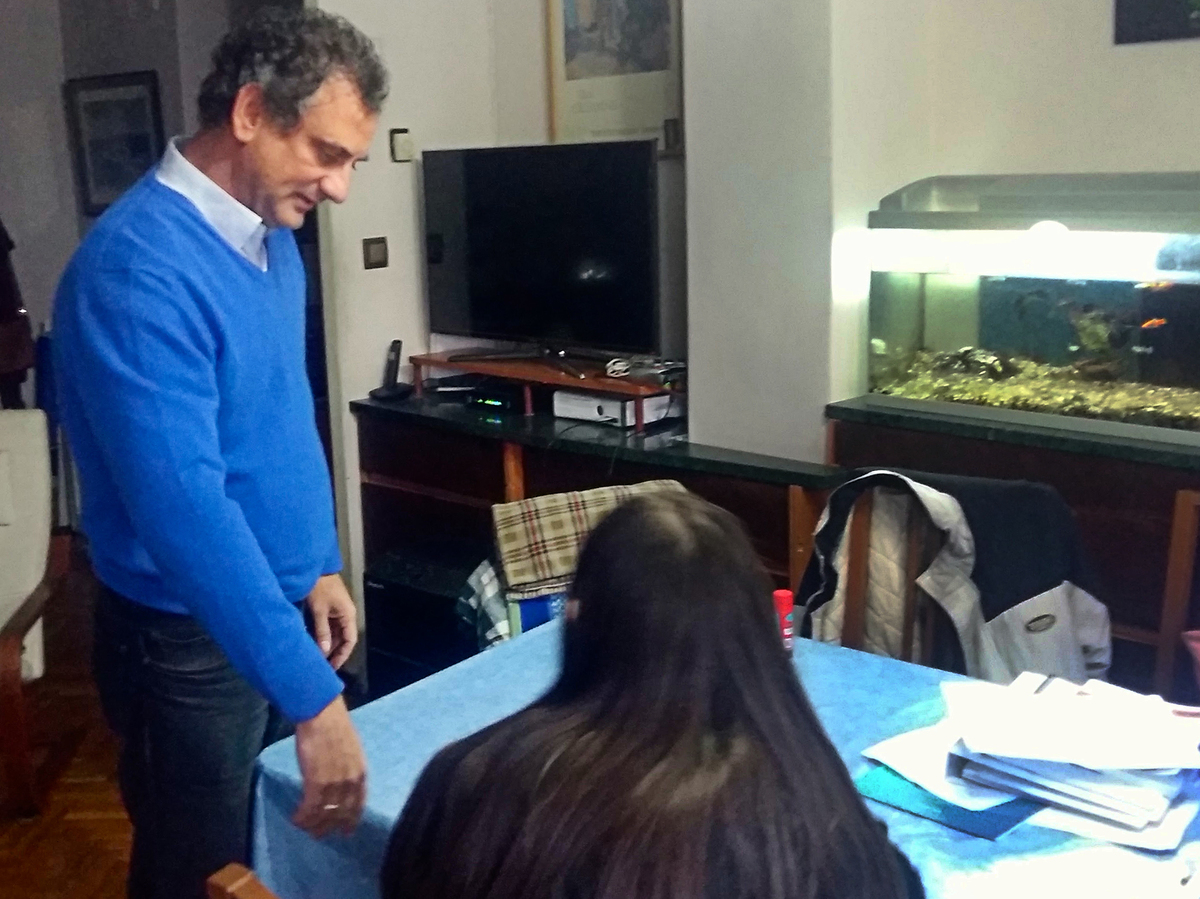 Camilo Jené, 51, watches as his daughter Clara, 14, does her homework at their dining table. She refuses to do homework on weekends now.

On a typical weekday evening, 14-year-old Clara Jené spreads out her homework across the dining table in her family's apartment in a leafy northern suburb of Madrid. She gets about three hours of homework a night — and more than twice that on weekends.

"Often we're sitting down to dinner, and I have to tell her to put away the books," says Clara's father, Camilo Jené, a 51-year-old architect. "It's cutting into our family time."

Keep in mind that Spaniards sit down to dinner around 10 p.m. Clara often resumes her homework after that, staying up as late as 1 a.m.

So last month, Spanish students went on strike. Clara is among millions of kids in primary and secondary schools across the country who've been refusing to do any assignments on Saturdays or Sundays.

"Last weekend, I spent time with my family. One day we went to visit my grandparents at our relatives' house in the mountains," Clara says. "I learned how to build a campfire outdoors."

Normally, she would have spend that time studying.

Lots of children around the world want to do less homework. But in Spain, parents and even some teachers are backing the kids up. Clara's father — a member of a national parents' association — is the one who suggested that she participate in the strike.

"It's complicated," Jené says, "because we all want our children to succeed."

He acknowledges that Clara's grades may not be as good as those of classmates who completed all their assignments. But the Jené family wants Spain's education system to change. They say it relies too much on busywork and rote memorization.

Spanish teenagers get more homework than the average for about three dozen developed countries surveyed annually by the Organization for Economic Co-operation and Development. The OECD found that the average homework load for Spanish students of all ages is 18.5 hours a week.

But that doesn't translate into higher scores on standardized tests. Spain consistently ranks below average in the OECD's rankings for student performance in reading, math and science.

"We think the reason is that our educational system is ancient. It dedicates a lot of time to memorization rather than participatory learning," says Marius Fullana, an astrophysicist, father of two and spokesman for the parents' association in 12,000 Spanish school systems, which called the homework strike.

Fullana estimates that about half of public school students across Spain took part in the strike in November. It was supposed to finish at the end of that month. But it received so much attention — and in some cases, resulted in less assigned homework — that many students plan to continue the strike through the end of 2016, he says.

While many were docked points on their grades for failing to do November weekend assignments, they're demanding not to be penalized in December. That will be up to individual teachers and school principals.

Some teachers have complained about the strike, saying it unfairly targets their profession and puts them in an adversarial relationship with their students, the parents' association says. But many other teachers have been sympathetic. Some stopped assigning weekend homework altogether.

Fullana says he hopes that becomes the norm.

In Spain, education policy is made by local governments in 17 autonomous regions across the country. A spokesman for the Department of Education in the Madrid region told reporters that there is no government mandate for homework on weekends. It's up to the discretion of individual teachers and school principals, he said.

Some experts say this homework strike has exposed a larger problem in Spanish society.

"It's much broader than just homework. Why? Because of working schedules. They're really not family-friendly," says Catherine L'Ecuyer, author of a bestselling book in Spain called The Wonder Approach to Learning.

L'Ecuyer, a French-Canadian education researcher and consultant who has lived in Spain for several years, says to change Spanish children's homework load, you first have to change their parents' workload.

The child does homework — for hours and hours. It fills a gap for Spanish families. But experts like L'Ecuyer say data show those hours of homework never actually benefit the kids themselves.

"Some educators, they tend to consider education as 'more is better' — more activities, more homework, more hours of school — more everything. And it's not true," L'Ecuyer says. "What we have to look at is quality."

So for now, parents and caregivers arrive at schoolyards across Spain on Fridays to pick up their children — many of whom will spend the weekend playing, rather battling their way through hours of homework.