Accessibility links
China Exonerates Man Executed 21 Years Ago For A Murder He Didn't Commit : Parallels A grieving mother fought for more than 20 years to clear her son's name after his wrongful conviction. Miscarriages of justice are rarely reversed in China and this is seen as a landmark case. 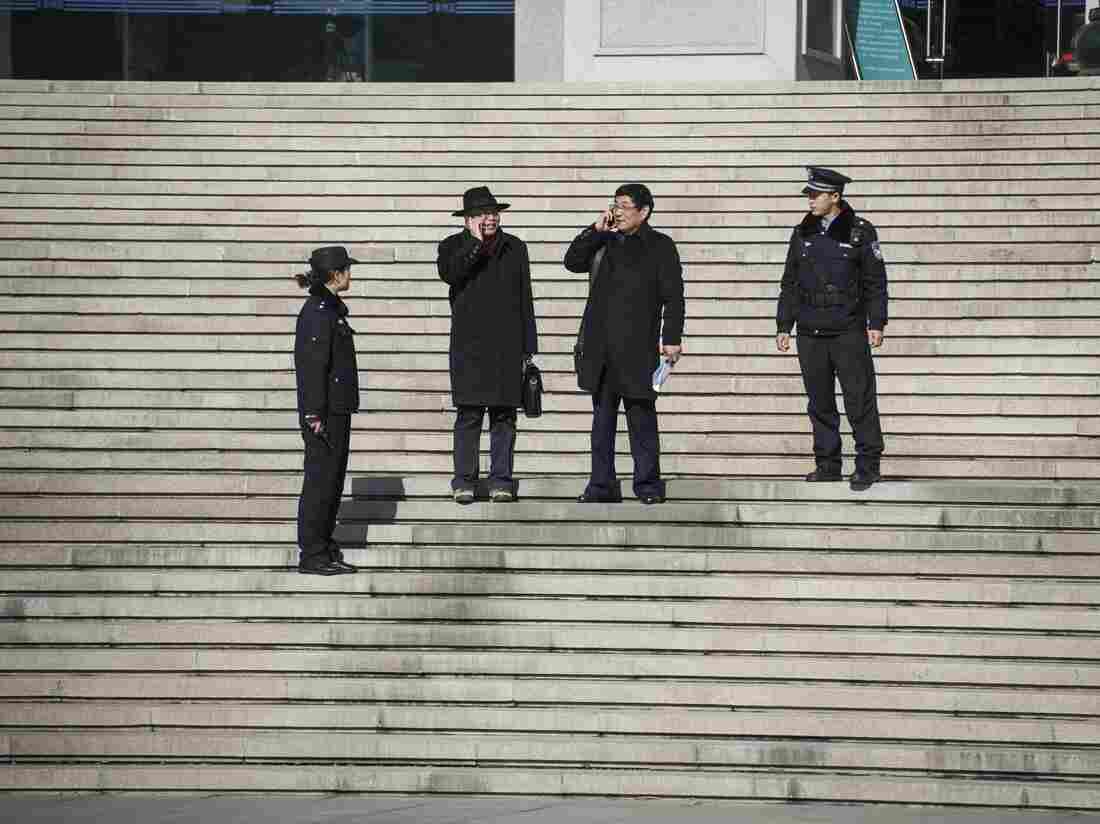 Lawyers for the family of Nie Shubin, who was executed by firing squad in 1995 for rape and murder, leave court in December 2014. China's Supreme Court exonerated Nie on Dec. 2, following years of effort by his family to clear his name. Fred Dufour/AFP/Getty Images hide caption 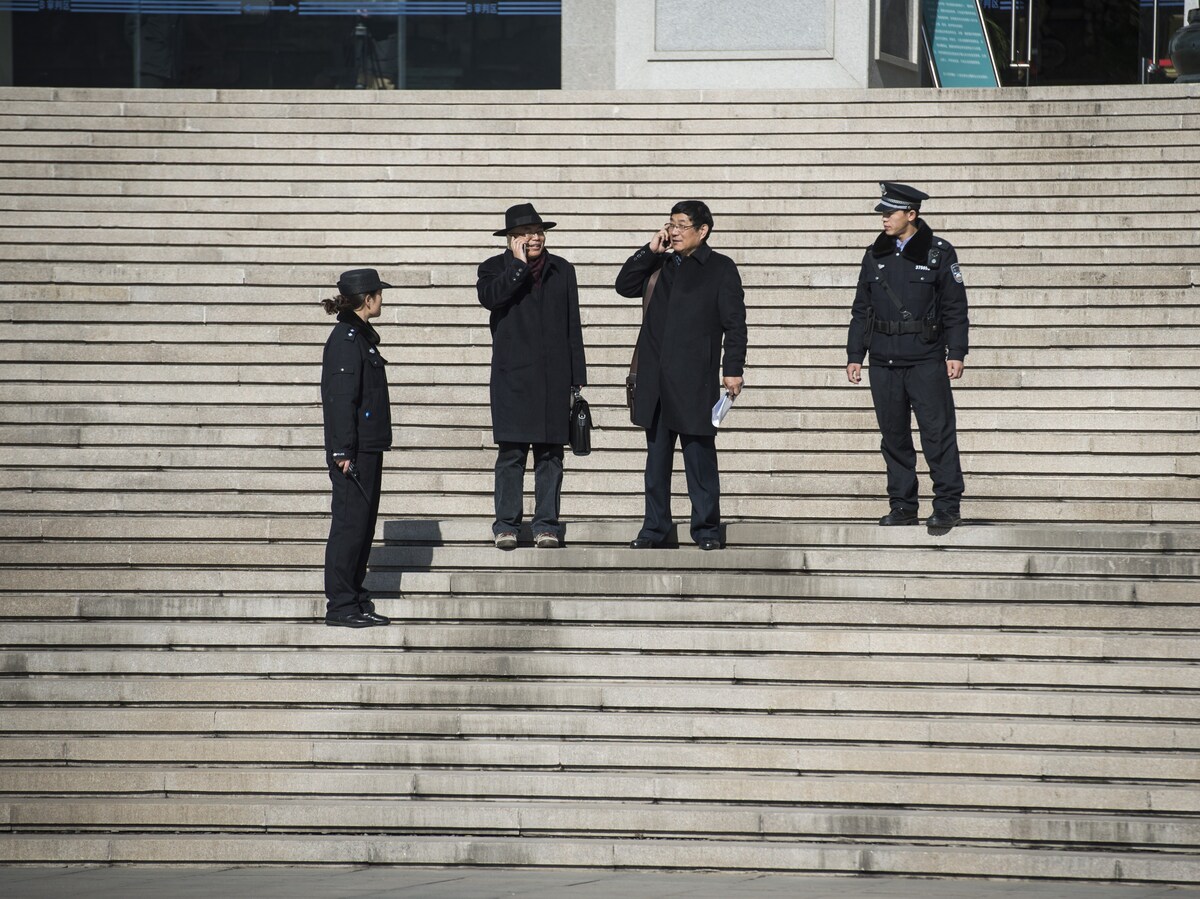 Lawyers for the family of Nie Shubin, who was executed by firing squad in 1995 for rape and murder, leave court in December 2014. China's Supreme Court exonerated Nie on Dec. 2, following years of effort by his family to clear his name.

Earlier this month, China's Supreme Court reversed a lower court's ruling and proclaimed Nie Shubin not guilty of raping and murdering a woman in a cornfield in northern Hebei Province more than two decades ago, in 1994.

Nie's mother, Zhang Huanzhi, has long campaigned on her son's behalf. She says she hurried to inform him of the verdict.

"I sent him a photocopy of the verdict," she says. "That is, I sent it to him by burning it. I feel he must be happy about it."

She burned the document before her son's grave, believing it would reach him in the afterlife.

"I said, 'Your mother's efforts over the past 21 years have not been in vain,'" she says. "'You're no longer a guilty man. Your mother has successfully fought to clear your name.'"

Nie was 20 when he was executed by gunshot in 1995. And so Zhang says that her happiness at the victory now is mixed with bitterness and hurt.

Miscarriages of justice are so seldom reversed in China that many observers are calling her son's case a landmark one.

China classifies the number of people it executes as a state secret. The Dui Hua Foundation, a San Francisco-based rights group, estimates that China executed around 2,400 people per year in 2013, 2014 and 2015, more than all other countries in the world combined.

This month, Zhang looks more composed and upbeat than the last time I interviewed her, three years ago, at her farmhouse in rural Hebei Province. Back then, the physical and mental toll of coping with the loss of her son — and fighting against overwhelming odds to clear his name — were evident on her face and in her words.

Zhang is now asking for more than $2 million in compensation from the government — and a public apology from the local authorities who handled the case.

"Why shouldn't I seek compensation?" she asks indignantly. "It's my right!"

Since 1994, Chinese law has allowed citizens to seek compensation from the state when it violates their rights.

China's leaders are making a point of trying to clear up miscarriages of justice in order to rebuild the public's trust in the legal system. China's citizens have for centuries been mistrustful of legal institutions, due to their corruption, capriciousness and emphasis on punishment.

Beijing University law scholar He Weifang, who has written dozens of articles calling for Nie's case to be retried, says that in China, wrongful convictions are generally only overturned because either the victim somehow survives to tell the truth or the real killer comes forward to confess to the crime.

"It's only these two kinds of cases that can be corrected," he laments. "Judicial authorities just don't admit on their own that they got a case wrong."

Nie's parents believe police tortured their son for six days until he confessed to crimes he didn't commit. For years, the family's lawyers were denied access to the case files, and many crucial documents disappeared — including company time clock records proving that Nie was at his factory job when the killing took place.

In 2005, another man, a farmer, confessed to murdering the woman, whose name was Kang Juhua. He was already under a death sentence for the rape and murder of three other women. Incredibly, prosecutors rejected the man's confession, and it took 11 more years to exonerate Nie.

He Weifang is not optimistic that the officials who created this injustice can be held accountable, "because the responsibility has been dispersed to actors behind the scenes whom we cannot see," he says.

The names of police, prosecutors and judges who handled Nie's case are public information. But in China, He points out, Communist Party and government officials often influence court verdicts behind closed doors, and their names are not known.

He Weifang does not believe any single official could be capable of such a long and complex cover-up. China has announced measures to punish officials who interfere in court cases, but He doubts they can be effectively implemented.

Nor is it clear, he adds, who might lead the official push for accountability in the Nie case. The best bet, he says, might be China's legislature, as the law allows it to form special committees to hold investigative hearings.

"But it's never happened," he notes. "A special committee has not been formed even once in the past 60 years."

Some people may believe that without accountability, there can be no real justice for Nie Shubin. But He advises those people to focus on pushing for bigger reforms, such as judicial independence.

More importantly, he urges people to focus on finding out the truth about what really happened to Nie Shubin, because that will be the biggest consolation to his grieving family.