Accessibility links
A French Community Tries To Get A Handle On Radicalization : Parallels Five men, four of them childhood friends from Strasbourg, are being held in a foiled terrorist plot. Radicalization of young people is a leading concern in the community. 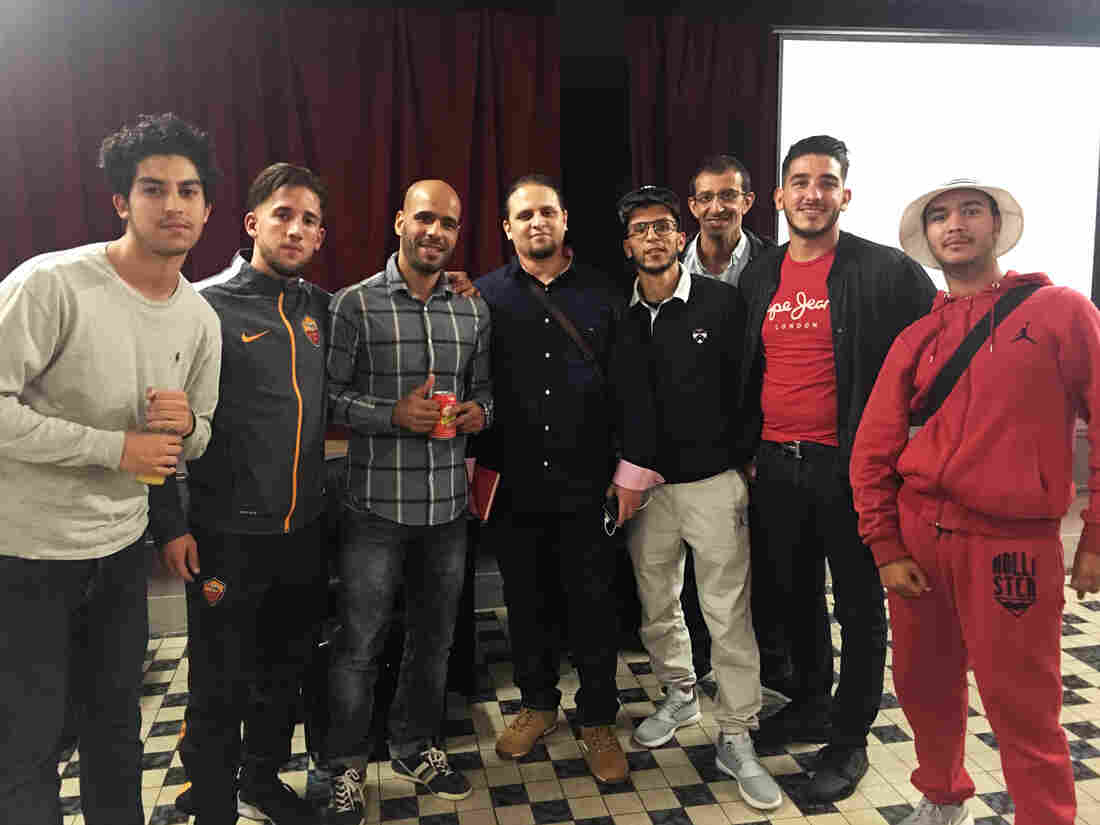 Mourad Benchellali (center, in all black) stands with teenagers after a talk about how to avoid being lured into a radical Islamist group. Standing to Benchellali's right is social worker Hamad Ouanoufi, who works with high-risk youths. Eleanor Beardsley/NPR hide caption 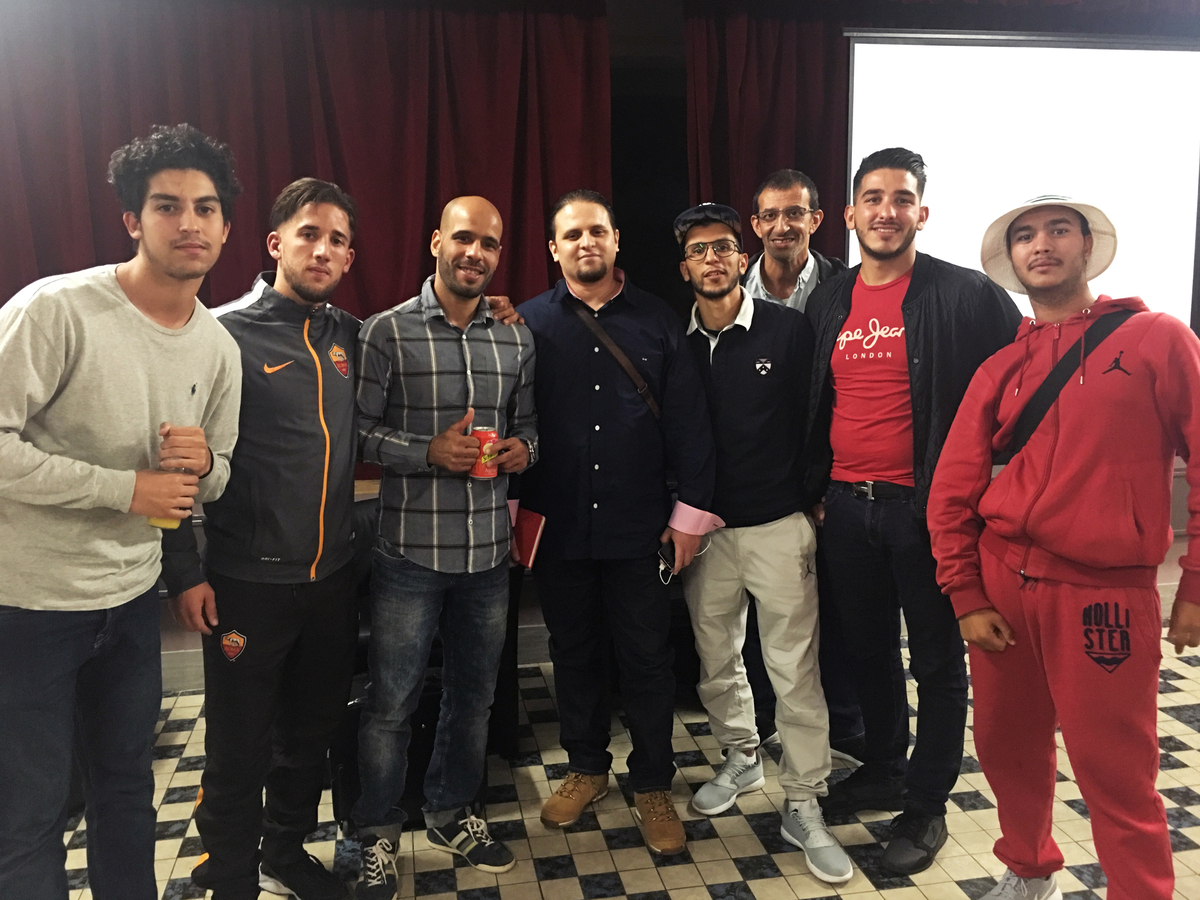 Mourad Benchellali (center, in all black) stands with teenagers after a talk about how to avoid being lured into a radical Islamist group. Standing to Benchellali's right is social worker Hamad Ouanoufi, who works with high-risk youths.

On a recent fall evening, a youth center in the eastern French city of Strasbourg is full of teenagers, teachers and parents. Everyone has turned out for a discussion and debate about a phenomenon plaguing their community. It isn't failing schools or the lack of jobs, but the fear of young people embracing radical Islam and going off to fight in Syria.

France has had more people radicalize and go to Syria than any other country in Europe — over the last three years, about 1,500 have either tried to go or gone to Syria, and 700 are still there, according to France's interior minister. And French police say they foiled a terrorist attack that had been planned for the beginning of December. Five men were charged. Four of them were boyhood friends from a working class, largely immigrant Strasbourg neighborhood just like this one.

Social worker Hamed Ouanoufi, who is helping moderate the program, works with high-risk youths. He says there is no single factor as to why young people radicalize.

"They fall prey to recruiters for many reasons," says Ouanoufi. "Mental frailty, social exclusion. The recruiters are looking for unstable youths and they begin by weaving their web on social media. Then they slowly pull them in, indoctrinate them and turn them into soldiers." 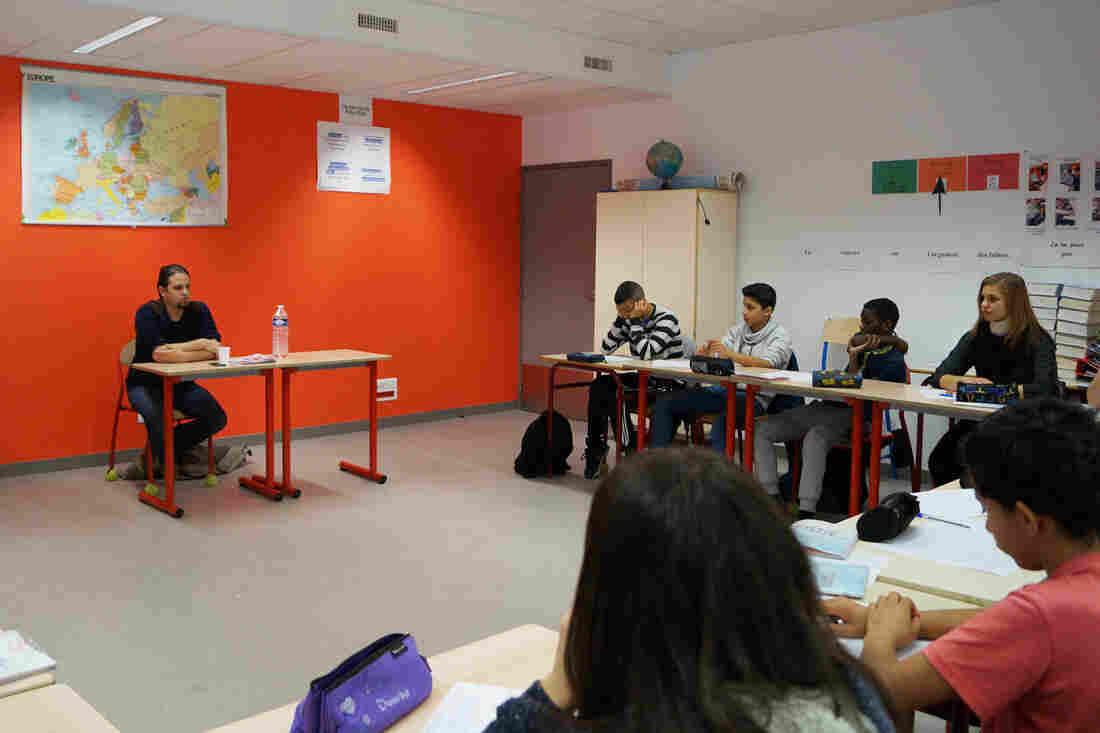 Mourad Benchellali speaks to a group of students and parents in Strasbourg, France. In 2001 Benchellali traveled to Afghanistan to visit his brother, and was forced into an al-Qaida training camp. He now speaks out against radical Islam. Courtesy of Mourad Benchellali hide caption 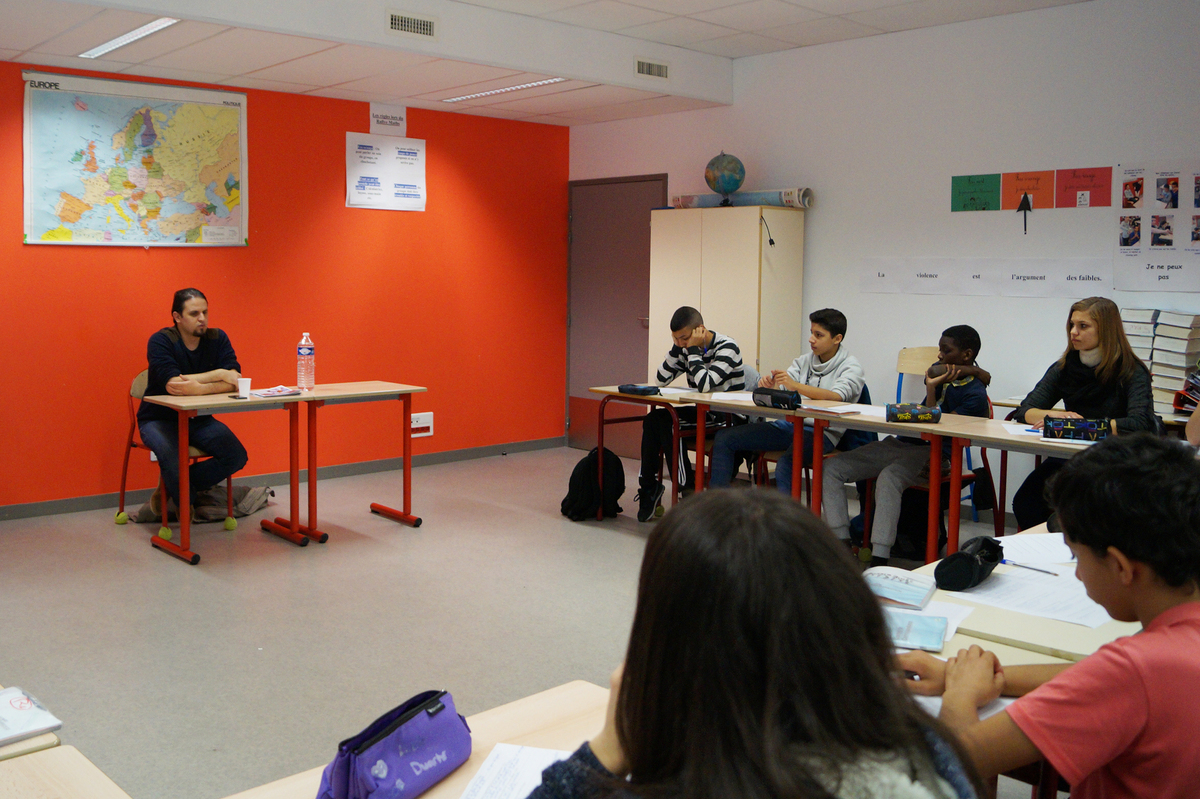 Mourad Benchellali speaks to a group of students and parents in Strasbourg, France. In 2001 Benchellali traveled to Afghanistan to visit his brother, and was forced into an al-Qaida training camp. He now speaks out against radical Islam.

Ouanoufi says the recruiters, from ISIS, earn money for each young person they hook. He's spent 17 years as a social worker in the neighborhoods of public housing blocks that ring Strasbourg. He says the work used to focus on fighting unemployment and delinquency. But now, the focus is on jihad.

This youth center plays an important role in this working-class, largely immigrant community just outside of Strasbourg. Many of the young people growing up here are Muslim and their parents or grandparents came from North Africa. Much like African-Americans living in inner-city housing projects in the U.S., people here face discrimination and problems fully fitting into society.

The young people here are French, but landing a good job is more difficult for them than for someone with a French-sounding name. This center provides employment opportunities and sporting and cultural activities. During this week, it is holding a series of public events related to radicalization, a growing concern for the community.

Tonight's program begins with a clip from a documentary film by an independent TV production company on the young people seduced by radical Islam. They come from families who are Christian and atheist, as well as Muslim. They're from rural areas, not just cities. Many are young women.

One anguished mother in the film says she wants to sleep by the front door to make sure her daughter doesn't sneak out in the middle of the night.

There's a special guest at the community center this evening. Mourad Benchellali takes the floor. Benchellali grew up in a Muslim family of Algerian descent in the projects of the southern French city of Lyon. He tells the audience he made the mistake of traveling to Afghanistan to visit his brother in 2001.

Back then, the Taliban ran Afghanistan. He says his brother told him it was a wonderful place and he had to see it. So Benchellali says he and a friend traveled to Afghanistan on what they thought would be a tourist trip, an adventurous one. But when they arrived in Kabul, unbeknownst to them, Benchellali's brother had already arranged for them to be sent to an al-Qaida training camp.

He says they tried to get out.

"One of the trainers said, 'You Europeans are always such sissies and we're sick of it,'" he recalls. "'No, you're not leaving until you've completed the 60-day training program.' "

Benchellali was in the camp when terrorists attacked the U.S. on Sept. 11, 2001. He and his friend fled Afghanistan for Pakistan, along with thousands of frightened Afghans fleeing U.S. bombs.

Once in Pakistan, Benchellali thought he had made it to safety. But local police turned him and his friend over to the Americans. Benchellali was sent to Guantanamo, where he spent nearly three years.

Eventually, he was transferred back to France — but not to freedom. Benchellali served time in a French prison before being released for good in July 2006.

Benchellali shows slides along with his story. The audience is rapt the whole way through.

Afterwards there are many questions. How did he start his life again? Is he full of hatred?

Benchellali says he was in bad psychological and physical shape after being tortured in Guantanamo and spending six years behind bars. After his release, he was treated for PTSD. His doctor helped him, as did his lawyers, and he benefited from job training as he struggled to get his life back together.

"Any hatred I have is for myself," he says. "Both my parents went to prison because of choices I made."

Benchellaili's parents were charged with association with someone planning to carry out terrorist attacks. After spending two years in prison, they were eventually found innocent and released.

One woman in the audience asks what she can do to make sure her daughters don't fall under the sway of radical Islam. The answer from Ouanoufi, the social worker, is far from comforting.

"Unfortunately, the first thing a recruiter teaches you is to hide everything from your family and friends," he says. "So the most vital thing parents and educators can do is to teach young people critical reasoning. To question. To understand that there is no single truth."

Ouanoufi says young people today are deluged with conspiracy theories and false information on the Internet.

After the debate, teenagers crowd around Benchellali, asking questions. He signs copies of the book he's written about his experience, called Trip Towards Hell.

Thibault Barabineau, a sports teacher in the area, says he came to the evening presentation and debate to get a better understanding of why some young people want to go to Syria.

"I have students who say they want to go, even though their motives aren't very clear and they seem confused," says Barabineau. "But if I'm going to intervene and try to help them, I need to know what it's about."

Youth coordinator Hamoud Bouabdellah helped organize the evening. He says the event is also being held to show the community it has to fight this threat together.

"The victims of radicalization come from every milieu," he says. "So there's no use pointing fingers at each other."

Bouabdellah says some statistics show that half the young people radicalizing in France are from non-Muslim families. So he says it's time to stop blaming and stigmatizing Muslims for the problem. "Everyone's imagining things about each other, for example, that Muslims are all terrorists. This has got to stop," says Bouabdellah.

Benchellali says he was never a radical, but that he was surrounded by hard-core Islamist radicals in prison — both in Guantanamo and in France. He says he decided he had to speak out after he began hearing young people talk about jihad as something heroic. He now travels to schools and community centers around the country.

"Simply telling young people jihad is bad is not going to dissuade them, if they really want to go," he says. But Benchellali says he hopes telling his story will make them think twice.