Accessibility links
Berlin Attack: Vehicle Attacks Are Nothing New : Parallels Using cars, vans or trucks to kill large numbers of people, a tactic embraced by ISIS, is easy to carry out and hard to deter. Such attacks have taken place across the globe, including in the U.S. 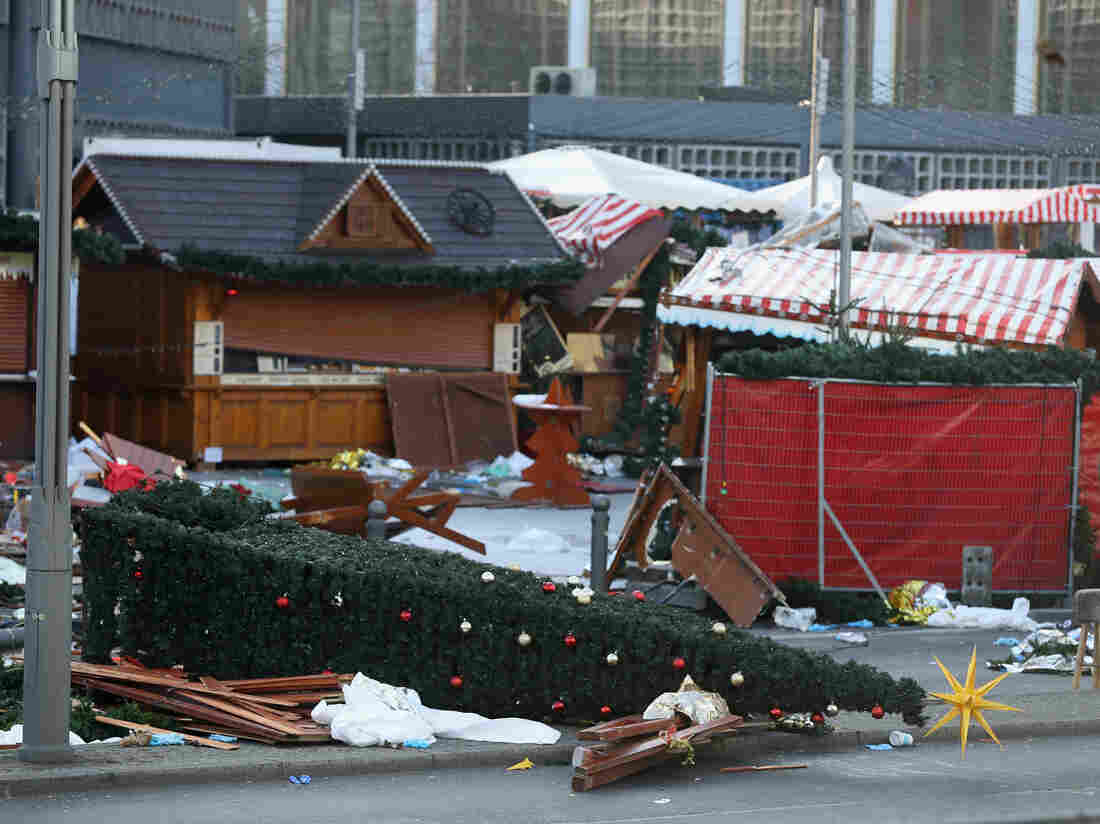 The Christmas market in Berlin was targeted in Monday's attack by a man driving a heavy truck into an area crowded with shoppers. Sean Gallup/Getty Images hide caption 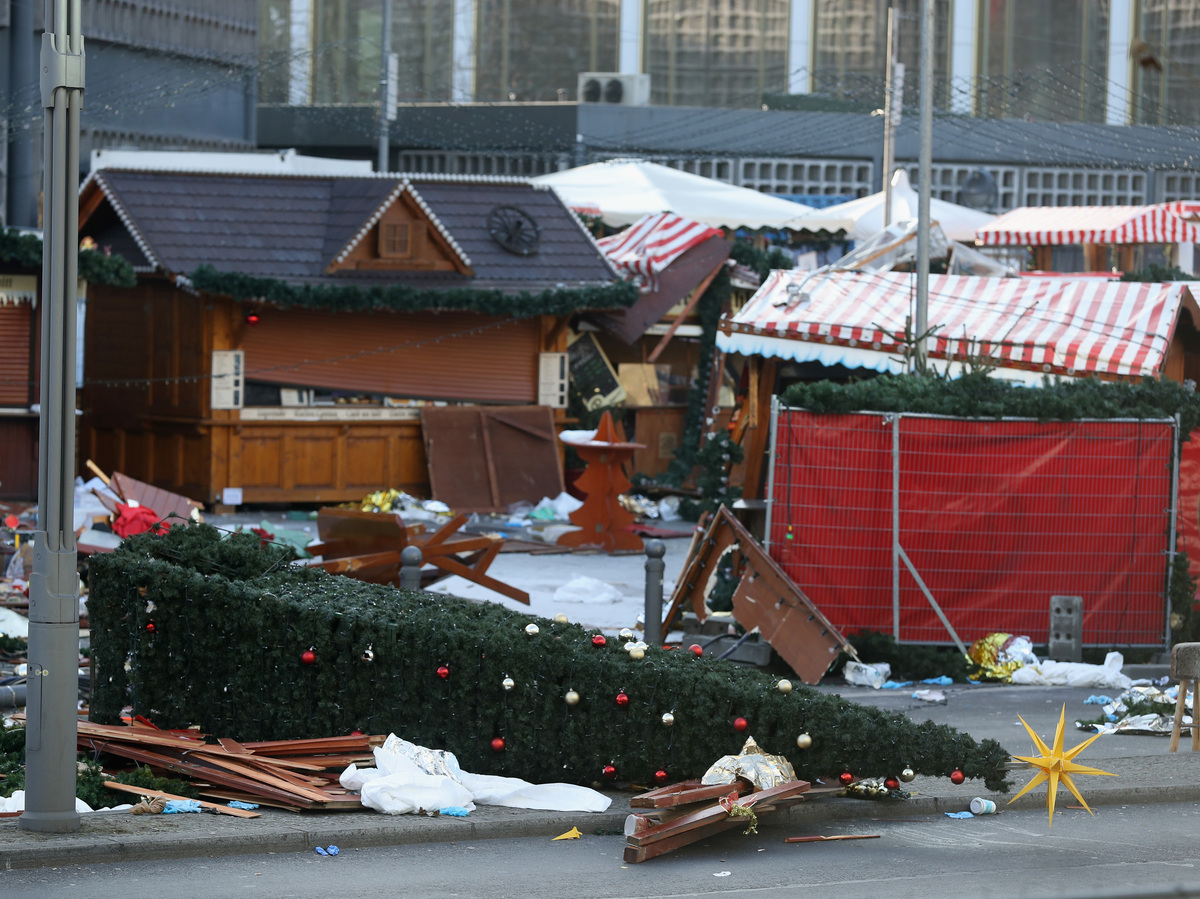 The Christmas market in Berlin was targeted in Monday's attack by a man driving a heavy truck into an area crowded with shoppers.

Monday's attack on a Christmas market in Berlin that killed at least 12 and injured scores more is the latest in a series of atrocities claimed in the name of the Islamic State. In this operation, an assailant — the suspect now sought by German police has been identified as Tunisian-born Anis Amri — rammed a truck into pedestrians and street stalls.

The attack was eerily reminiscent of this year's Bastille Day attack in Nice, France, which killed more than 80 people, and even the late-November attack by a student at Ohio State University who plowed his car into a Columbus crowd, injuring more than a dozen people.

The use of this particular method is eminently unsurprising. In fact, what's rather odd is that ramming vehicles into massed civilians hasn't been used more often to sow terror across the globe.

Why? Because the Islamic State has been calling for this type of operation for a long time, using it to deadly effect in Iraq, Syria and elsewhere. It and similar terrorist organizations have been calling for vehicle operations for years, because they're easy to mount and very difficult to stop once the wheels start turning. It's a low-cost method to kill scores of people, given innumerable soft, mostly unprotected targets.

Perhaps the biggest surprise is that we tend to forget how many attacks like this have taken place in the past.

Using cars to kill as a terror tactic is nothing new, and certainly not an Islamic State innovation by any stretch of the imagination. For example, in mid-2008, at least three separate Palestinian attackers used cars and bulldozers to kill and injure multiple people in and around Jerusalem.

That same year, a Uighur militant group rammed a dump truck into a group of 70 Chinese police officers and then attacked them with machetes, killing 16. British soldier Lee Rigby was rammed and decapitated by radicals influenced by al-Qaida on a London street in 2013. And in 2014, a deliberate hit-and-run attack in Quebec killed a uniformed Canadian soldier and injured another.

Weaponizing vehicles is a tried and true tactic of al-Qaida and the Islamic State. As far back as 2010, al-Qaida in the Arabian Peninsula (AQAP) publicly called on its adherents to attack by using cars in its English-language online magazine Inspire, advising attackers to "pick your location and timing carefully. Go for the most crowded locations ... The ideal location is a place where there are a maximum number of pedestrians and the least number of vehicles."

And as recently as last month, the Islamic State's Rumiyah magazine called for utilizing vehicles to strike the Macy's Thanksgiving Day Parade in New York City.

Of course, U.S. authorities have known about this tactic for a while. In late 2010, the FBI and the Department of Homeland Security issued an unclassified paper entitled "Terrorist Use of Vehicle Ramming Tactics." This was in part due to AQAP's public call that year, but was also a reminder that these kinds of attacks have happened here in the U.S. as well.

Few remember that a decade ago, in 2006, Mohammed Taheri-azar plowed his Jeep into a crowd of students at the University of North Carolina Chapel Hill — or that in January 2001, Mike Bowers, a recent parolee, smashed his 18-wheel semi into the Capitol building in Sacramento, Calif., incinerating himself in a giant fireball.

Christmas markets appear to be a favored target of some radicalized individuals inspired to murder. In late December 2014, a man drove a car into a crowded market in Dijon, France, injuring 13, while a similar attack by a man driving a van a day later on the other side of the country, in Nantes, killed one and injured nine.

As it happens, this week's Berlin attack occurred just a week after a 12-year-old German-Iraqi boy was accused of planning a nail bomb attack in a Christmas market in the southern city of Ludwigshafen.

Setting aside possible theological or cultural rationales for striking these venues, maybe the attackers' rationale was much simpler: These were small places where they could inflict mass casualties.

As we've seen in Nice and Berlin, once a tactic is deemed "effective," it'll be utilized over and over again. The Israeli Ministry of Foreign Affairs recently reported there were 48 ramming attacks from mid-September 2015 to November 2016. Next time, it could be a parade or a secular street fair or an outdoor concert venue. The potential targets are too numerous to defend them all. And unlike the Paris attacks in November 2015, a vehicle attack takes only one determined attacker.

Sadly, if there are others out there looking to kill and die in the name of the Islamic State or other murderous organizations, it is likely this tactic will be employed again, to devastating effect.

Aki Peritz is a former CIA analyst and co-author of Find, Fix, Finish: Inside the Counterterrorism Campaigns that Killed bin Laden and Devastated Al Qaeda. Follow him on Twitter @AkiPeritz.