Accessibility links
In A Syrian Suburb Cleared Of Rebels, A Gradual Return To Everyday Life : Parallels In some areas of Syria, local truces have averted deadly military takeovers. But in a suburb north of Damascus, rebel fighters say their departure resulted more from coercion than negotiation. 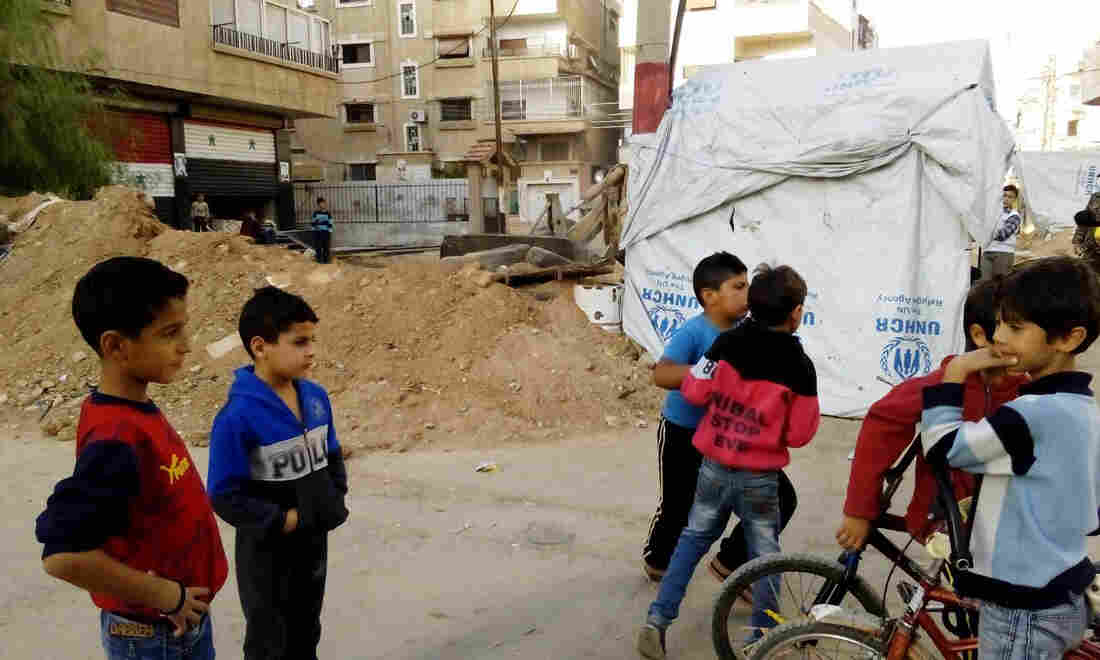 Syrian children wait as a checkpoint that once separated their Damascus suburb from government-held areas is bulldozed. Rebels left the town in a truce negotiated with the help of local activists and notables. Alison Meuse/NPR hide caption 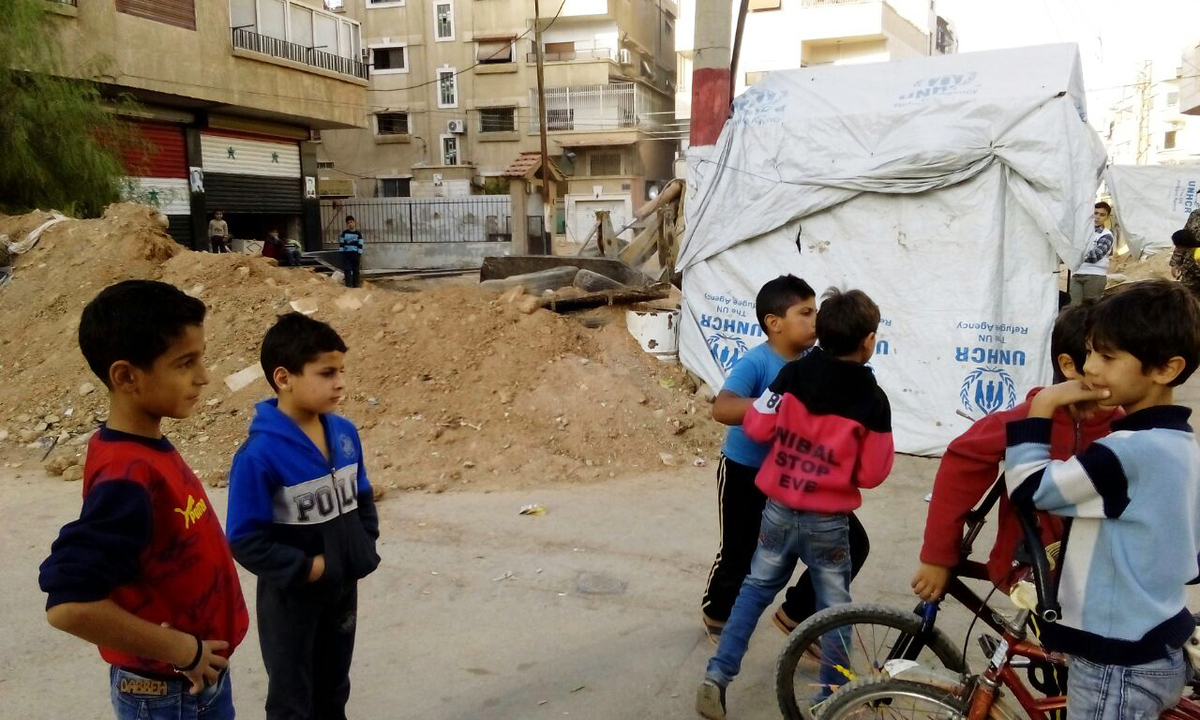 Syrian children wait as a checkpoint that once separated their Damascus suburb from government-held areas is bulldozed. Rebels left the town in a truce negotiated with the help of local activists and notables.

In Syria, forces loyal to President Bashar Assad this month retook the last rebel bastion of Aleppo after weeks of intensive bombing and tens of thousands of people displaced. But Syrian officials say there are other areas where local truces have averted deadly military takeovers, and which offer the only way forward for the country.

One of those areas is the Damascus suburb of Qudsaya.

There, a government-sanctioned "reconciliation" was brokered with the help of local religious leaders, activists and the rebels themselves.

Syrian officials consider Qudsaya a success story, but it's not an easy place to visit. After two refusals by the Syrian military, approval to go with a government-approved interpreter was finally granted to NPR last month.

The road itself was straightforward. Qudsaya is just a 15-minute drive from the capital, along a scenic highway overlooking the sprawling suburbs. A cab driver let us off just short of the checkpoint — a small, earthen barrier and a small guardhouse.

That barrier was just being cleared when we arrived with our permission to visit. It was a sunny day and the children of the town were out in force on their bicycles. A steady trickle of returnees strolled casually through the checkpoint. Shoppers stocked up at newly reopened stores.

The main road into the town was still being cleared of earthen blockades as children bounced along on their way home from school and shoppers stocked up at newly reopened stores.

Abdul Kandour had just gotten his small falafel shop running again, and was handing out samples of the fried chickpea patties. When asked how it's going, he shrugged as if to say, "Can't complain."

The overall mood was one of relief at the return of mundane daily routines, and a hope that life can get back to normal.

Mohammad Aoudeh, an elderly man carrying two full shopping bags, was happy to see the backs of the fighters — who he said weren't foreigners, just young men from in and around Qudsaya.

"In my view, they weren't rebels, they were an armed gang," he said.

A woman paused to talk while her young son tugged at her hand. Abeer Shameel agreed that the fighters were bringing misery down on the town.

"They're actually the ones who used to start the problems," she said — by firing at the military checkpoints and sometimes kidnapping soldiers.

Others didn't judge the rebels so harshly. Sheikh Adel Mesto said he headed the local committee that negotiated with the government. The rebels played a role in ending the violence, he said.

"The armed groups could see that more clashes with the military would mean this town is destroyed," he said. "So they took the step to leave, to spare the town from destruction."

The evacuation of Qudsaya fighters was arranged through Syria's Ministry of National Reconciliation. The name is aspirational: Minister Ali Haidar knows that for now, the best he can hope for is piecemeal, local reconciliations like the one in Qudsaya.

Haidar says government supporters initially rejected the idea of rebels being cleared out without consequence. Opposition activists, meanwhile, decry the deals as "kneel or starve" campaigns that have displaced local rebels and unarmed dissidents alike, at a horrific civilian cost.

International attention naturally focuses on the worst humanitarian cases, most recently in Aleppo, and earlier this year, in the Damascus suburb of Daraya, which suffered a four-year military siege and daily barrel bombing. U.N. aid deliveries were turned back. By the time the fighters and surviving civilians left under a deal earlier this year, Daraya was destroyed. There was nothing to go back to.

Haidar disputed the U.N.'s assertion that thousands of Daraya civilians were starving, and he said those who did escape the area were given housing in another Damascus suburb.

In the end, about 2,000 people were left inside the besieged area, many of them fighters and their families. Haidar argued that these holdouts were the obstacle preventing thousands of loyalist families from returning.

Reconciliation processes have been hammered out in localities across the country, Haidar said. Fighters either lay down their arms or take them with them and leave, usually to Idlib province in the north.

Anti-regime activists usually leave too, fearing the government's notorious network of detention facilities. Amnesty International estimates more than 17,000 people have been killed in state custody over the course of the uprising turned civil war.

In return for the fighters' departure, civilians are offered stability and the restoration of services.

Community leaders in areas other than Qudsaya where truces have been struck or are in progress say the government routinely breaks its promises and drags its feet on key conditions, like releasing peaceful dissidents.

Departed fighters say the truces amount to coercion, not negotiation.

NPR reached one of the young men who got on a bus out of Qudsaya. He gave only his initials, M.A., because even today, he's worried about revenge attacks on his parents, who are still in the suburb.

He said as the talks with the government grew more intense, so did the military pressure — until one day, he says, the army made clear just how far it was prepared to go.

"Finally, they literally said to us, 'Either you get the hell out of this town or we completely destroy the place,'" he said in a phone interview. "They literally said that. They'd destroy the town and then we'd have to leave anyway, like in Daraya. So a group of us decided we're better off leaving, we didn't want the town to be destroyed."

The government said the point of the negotiation was to save the town, not destroy it.

A young man who worked on the reconciliation committee but didn't give his name for fear of repercussions, said that while few houses at the entrance to Qudsaya bear signs of the war, army bombardments had leveled other houses further in.

The young man told NPR later via the Internet his main concern now is the fate of military-age males. After the reconciliation deal, they were given a grace period of six months to settle their status with the military. Army service is compulsory in Syria, avoidable only by university attendance. With the army stretched thin, the need for manpower is great.

"We don't know if they're going to start picking people up at checkpoints or actually raiding people's houses," he said. He already finished his army duty before the uprising, but says he could be called into the reserves.

On the second floor of Qudsaya's municipal building, a crowd pressed around a small doorway. This is where people come to report all manner of problems with the homes they're returning to. A local man who identified himself as a local accountant said, "Sanitation, water, electricity, every issue comes through here and a team is sent to investigate."

It looked to be a slow process, but after the past years of violence, people seemed happy to wait in line.

Eight-year-old Majid Katibi rode his bicycle with friends. He was fixated on the bulldozer clearing the earthen barrier and said he didn't like the former checkpoint between the town's rebels and the army.

Nearby, six-year-old Hala was walking home from elementary school.

"I used to be at another school, but when my grandparents heard the Qudsaya road was open again, they decided to come back to their home. So now I go to this school," she said confidently.

School is a distant dream for many children elsewhere in Syria, where efforts to negotiate agreements with rebels have failed. But the government seems intent on pursuing its strategy of trying to convince people that these piecemeal settlements are better than force — which is never off the table.