Accessibility links
For Pope Francis, A Year Of Reconciliation Abroad Amid Opposition At Home : Parallels The pope worked to repair relations within the Christian world, but things were tougher in the Catholic world. A church historian says no other pope has met as much opposition from bishops and clergy. 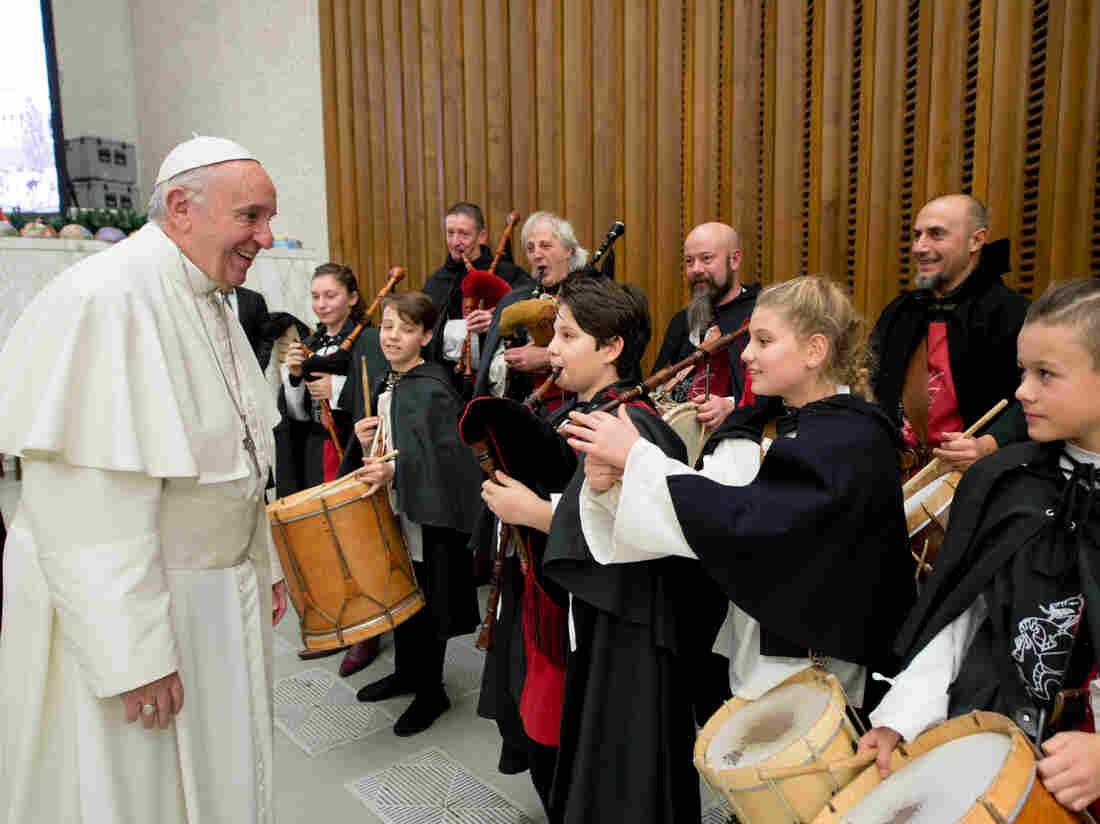 Pope Francis listens to a children's band during his weekly general audience in Paul VI Hall at the Vatican on Dec. 21. L'Osservatore Romano/Pool Photo via AP hide caption 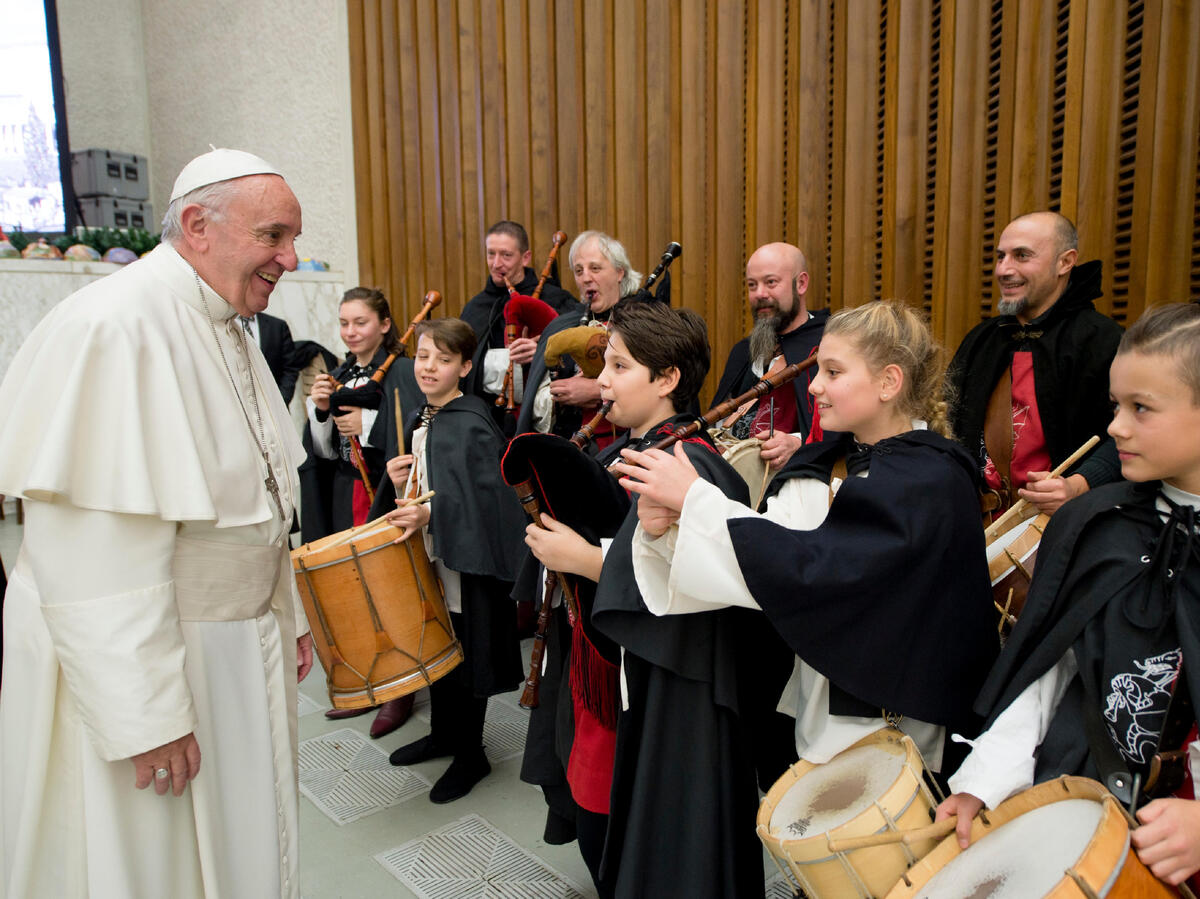 Pope Francis listens to a children's band during his weekly general audience in Paul VI Hall at the Vatican on Dec. 21.

Pope Francis turned 80 this month, at the end of what has been a busy year.

He made six foreign trips and oversaw many events and ceremonies with millions of pilgrims throughout what he proclaimed the Holy Year of Mercy. The year was also marked by the pope's efforts to heal divisions within the Christian world and tackle dissension within Catholicism.

The thrust of Francis' international outreach this year was ecumenism — what's known as Christian unity.

In Cuba, he met Russian Orthodox Patriarch Kirill — an encounter his two predecessors had tried in vain to achieve. Francis also went to the migration crisis front line, the Greek island of Lesbos, together with the Orthodox Patriarch of Constantinople to underscore the dignity of refugees.

The pope's most recent trip, in October, was to Sweden, where in a joint ceremony with Lutherans, he commemorated the 500th anniversary of the Protestant Reformation.

Papal biographer Marco Politi says Pope Francis is working toward a shared view of history among the different confessions.

"It's no more a diplomatic relationship between different churches, but it means building a common history of Christianity in [the] last 1,000 years, beyond divisions," he says.

An Italian TV documentary made for the pope's 80th birthday contained several clips from a long interview in which Francis spoke of the need for Vatican reforms. "The papal court still follows an out-of-date formalism," he lamented.

Robert Mickens, editor of La Croix International, a Rome-based Catholic daily, says the pope has made clear his aversion to clericalism, which Mickens describes as a "privileged and separate caste mentality of clerics, that they are specially chosen, and they are set apart from rest of people, to rule, to teach and to admonish."

Priest Antonio Spadaro, editor of the Jesuit publication La Civilta' Cattolica and someone who's close to Francis, concedes there is resistance within the Vatican.

"There are oppositions to his work, but this is, in a sense, a good sign. His job as a pope has a real effect, impact on the church," he says. "He likes also to receive different kinds of messages and feedbacks."

But disagreement with the pope has come very close at times to open dissent. The bone of contention is a papal document issued in April.

Amoris Laetitia, The Joy of Love — Francis' meditation on marriage, sex and the family — contains a footnote that seemingly opens a crack in the door allowing some divorced and civilly remarried Catholics in certain situations to receive the sacraments.

Four cardinals, most of them retired, wrote a highly publicized letter demanding that the pope clarify the magisterium — church teaching — on the indissolubility of marriage.

One of the signatories, American Cardinal Raymond Burke, voiced his dismay in an interview with gloria.tv, a conservative Catholic website.

Pope Francis Grants All Priests The Authority To Absolve Abortions

"It's very dangerous now that people simply say that they accept everything in Amoris Laetitia as magisterium," Burke said. "Well, it is not, this is a very serious matter that needs to be addressed."

Papal biographer Politi says these cardinals can speak out because they have few official responsibilities. Behind them, he notes, lies a broad, hidden opposition to Francis within the hierarchy.

"The practical impact of this is to de-legitimize his activity," he says. "This opposition is trying to influence already the next conclave."

Will Cuba Meeting Of Pope And Patriarch Help Heal A 1,000-Year Rift?

Francis continued this year to diversify the College of Cardinals, increasing the numbers from Asia, Africa and his own region, Latin America. But it will take more time to put his stamp on the body that will someday elect his successor.

Politi compares the opposition to Francis to the Tea Party movement's anti-Obama campaign in the U.S. They can't topple the pope, says Politi — but they want to ensure that his legacy will be overturned by his successor.

Italian Church historian Andrea Riccardi says that in the last 100 years, no pope has encountered as much opposition from bishops and clergy as Francis.

The pope has not responded to the four cardinals' request for clarifications and, when asked in a recent interview about the charge that he is "Protestantizing" the Catholic Church, the pope replied, "I don't lose sleep over it."

On Dec. 22, in his Christmas greetings to members of the Curia — the Vatican bureaucracy — Francis outlined his sweeping vision of reform, calling for a more multicultural administration in which clerical staff could be replaced with more qualified lay people and women. He also denounced the various types of resistance his agenda has encountered inside the Curia — the "open" kind, the "hidden" and even the "malevolent."

Francis described the latter as "the type that germinates in distorted minds and presents itself when the devil inspires wicked intentions, often in lamb's clothing."

Many Vatican analysts say Francis has spoken privately about yet one more controversial topic he would like to tackle. In view of the growing worldwide shortage of priests, Francis has indicated he would like to introduce the possibility of a married priesthood. But to do that, he'll need more backing from his bishops.

The topic of the next Synod of Bishops, in 2018, will be "Youth and Vocation." Mickens, the editor of La Croix International, says that assembly could be the appropriate place to introduce the idea of a married clergy.

"And once that happens," he says, "that will have a domino effect. Once you have married priests, it will naturally lead to a bigger role for women, it will change the whole mentality."

The first non-European pope in nearly 1,300 years, Francis enjoys overwhelming support among the faithful. On the day after his birthday, the pope's Twitter following hit a record 32 million followers across his nine various-language accounts. That number makes him one of the most followed figured on social media worldwide.

At the age of 80, his supporters say, Francis is going strong — determined to forge ahead with his agenda, despite growing opposition from within his ranks.